The positive impact of cocoa shell on nutritional value of food was emphasized, such as increase of fiber content, enrichment with polyphenols, positive impact on glucose metabolism. However, potential shortcomings, such as mycotoxins, PAHs, and microbial contamination are also discussed.

The cocoa industry generates large amounts of waste that consist of pod husk, pulp, and bean shell. Namely, cocoa beans, which are the main ingredient in chocolate production, are removed from the cocoa pod, after which they are fermented and dried. Cocoa bean shell is removed from seeds before or after roasting of the beans [1].

After the separation of the shell from the seed, it is usually discarded or sold as agricultural mulch. Since the shell presents 12%-20% of the bean, it is obvious that this is the largest waste generated after processing the beans [2][3][4]. According to International Cocoa Organization [5], the world generation of cocoa waste can be estimated to 700 thousand tons per year. 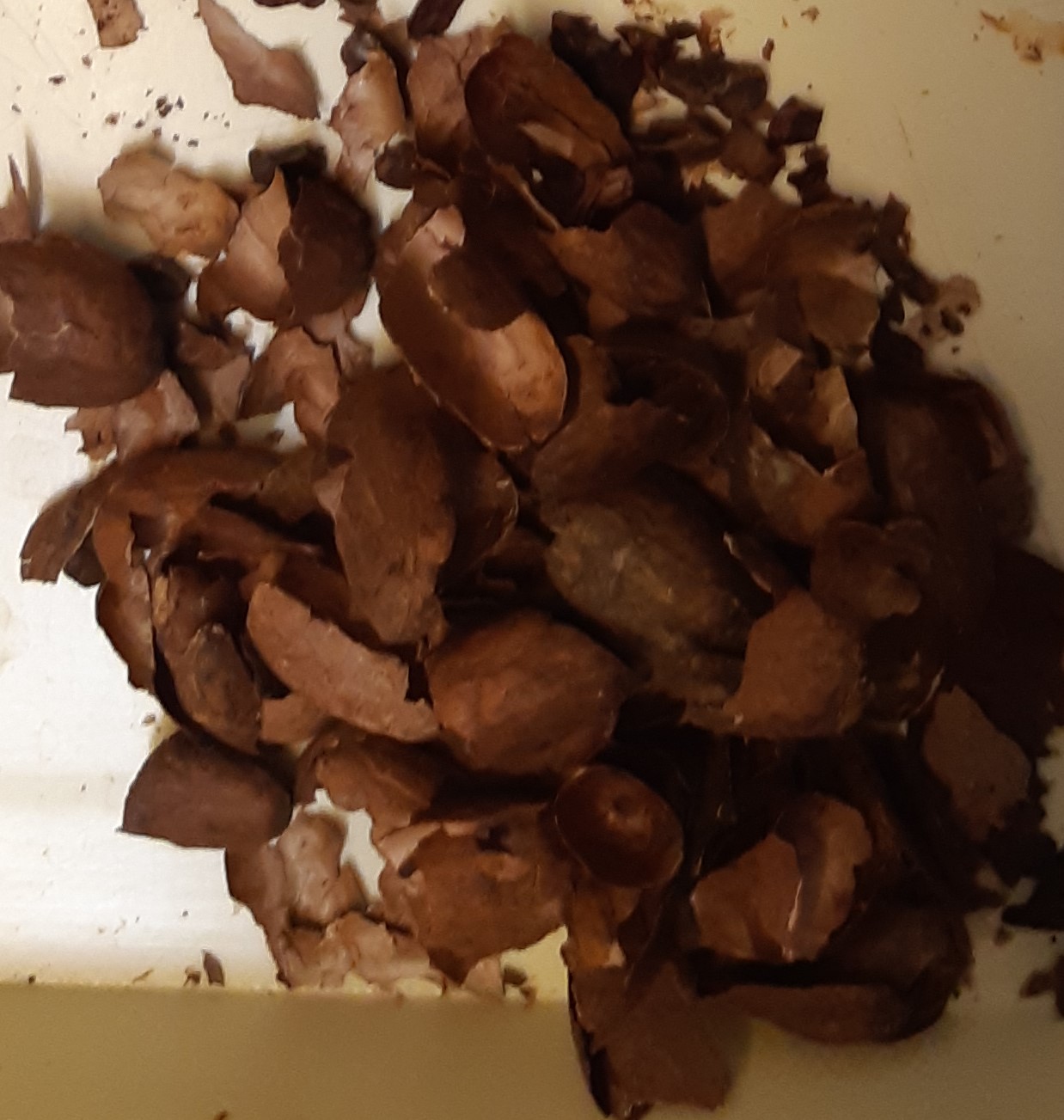 Cocoa shell separated after the roasting.

Cocoa shell has an interesting composition. It is rich in dietary fibers, proteins [4], polyphenols [6][7], methylxanthines [8], etc.

Dietary fibers are generally divided into soluble and insoluble fibers. The soluble/insoluble ratio is very important in human nutrition, and cocoa bean shell has a ratio close to desirable, giving it potential for direct implementation in food [9]. Dietary fibers of cocoa shell are mainly composed of pectin and cellulose [6]. In addition, cocoa shell is rich in flavanols (catechin and epicatechin), which have an antioxidant activity, and methylxanthines (theobromine and caffeine), which have an effect on the human nervous system [10][11]. Okiyama et al. [12] investigated the lipid profile of cocoa shell and concluded that it is similar to that of cocoa butter, which could lead to its application as a partial substitute for cocoa butter.

2. Use of Cocoa Shell in Food Production

Cocoa shell composition has driven many scientists into implementing cocoa shell directly in food products and investigating the properties and sensorial acceptance of the obtained products. In addition, there are research that investigated the application of different components of cocoa shell as a food ingredient. This subsection gives an overview of papers that have addressed this topic.

Martinez-Cervera et al. [13] produced chocolate muffins with the addition of soluble dietary fiber extracted from cocoa shell as a fat replacer. They observed decreased hardening during storage, appropriate texture, higher moisture, and appealing color of enriched muffins. In another research soluble dietary fibers from cocoa shell were used in production of wheat bread in contents up to 6% without negative effect on sensory properties and storage, with positive impact - a softening effect [14]. The beneficial effect of commonly consumed products enriched with dietary fibers from the cocoa shell, such as muffins and bread, effects on glucose absorption was shown in an in vitro study by Nsor-Atindana et al. [15], striking the potential of cocoa shell as a food component.

Mazzutti et al. [11] explored the potential of producing both lipid-enriched and phenolic-rich extracts from cocoa shell, stressing their great potential for incorporation in food products. However, polyphenols are heat-sensitive components and solutions have been sought to preserve them during thermal treatment of food. Papillo et al. [16] used spray-drying with maltodextrins to achieve this. Results showed that polyphenols in these extracts were protected during baking and storage.

Alkalized cocoa shell has also found its way into food production. Bernaert and Rysscher [17] used it for production of a cocoa beverage with a unique taste and rich in dietary fibers. In another study, they concluded that cocoa shell powder could be used in different food products as a replacement for cocoa powder [18]. Alkalized cocoa shell was used also in the production of cookies, and the obtained product showed higher resistance to breaking compared to wheat cookies [19]. Another study was conducted to investigate functional beverages with cocoa shell [20], where beverages with the highest content of bioactive compounds were the least appreciated by consumers. This was probably because of polyphenols and methylxanthines that give an astringent taste to these products.

Some direct implementations of cocoa shell in food products without previous processing include the production of pork sausages [21] and extruded snack products [22]. Pork sausages with levels of cocoa shell of 1% or lower had improved color, viscosity, moisture content, and emulsion stability. It is important to emphasize that the addition of cocoa bean shell inhibited lipid oxidation in these products. Jozinović et al. [22] added cocoa shell in extruded snack products in amounts of 5%, 10%, and 15%. This enrichment increased resistant starch and polyphenol content. Although physical properties were slightly poorer than in conventional products, they were still sensoricaly acceptable.

Cocoa shell will also be interesting for incorporation in chocolates because it would not need to be transported from chocolate factories. It would be directly used in chocolate production, which would decrease the cost of its use. A great deal of research has been done with focus on enrichment of chocolates with fiber sources where they replaced sugar or fat [15]. This gives promising hope that the use of cocoa shell in chocolate production could come to life and the project "Application of cocoa husk in production of chocolate and chocolate-like products" financed by Croatian Science Foundation (UIP 2017-05-8709) is aiming to achieve this. The list of publications resulting from the project may be found here.

2.1. Problems with Use of Cocoa Shell in Food Production

Cocoa beans are fermented, dried, and stored most commonly in unhygienic conditions, since the majority of operations are held outside. The result is that they are often contaminated with Aspergillus, Eurotium, and Absidia species [2]. Copetti et al. [23] reported that ochratoxin A, which is produced by fungi of Aspergillus and Penicillium genera, are concentrated in cocoa shell, while only small amounts of the toxin are detected in cocoa nibs. This toxin is present in a wide variety of foods like coffee beans, dried fruit, and cereals [24]. Aflatoxins B1, B2, G1, and G2 have been found in cocoa shell, also more frequently than other parts of bean. They appeared in 11% of the samples [25]. These components are very stable and cannot be completely destroyed during processes conducted during the production of chocolate [26].

Cocoa bean may be contaminated with heavy metals because of environmental and external influences [27]. A major concern is the presence of nickel (Ni), cadmium (Cd), chromium (Cr), and lead (Pb) [28]. Most research mentioned below were conducted to examine heavy metal contents in chocolate and cocoa products [29][30]. Increased contamination was mostly because of the use of fertilizers, pesticides, insecticides, etc. If these activities are not controlled and managed according to Good Agricultural Practice (GAP) and Good Manufacturing Practice (GMP), they can lead to increased content of heavy metals [31]. Additionally, fermentation, drying, crushing, and contact with metal devices during processing can affect the content of heavy metals [32].

Cocoa shell in most cases has higher content of these compounds because of its high absorption capacity. This characteristic is used in a few researches to examine cocoa shell as a new adsorbent for the removal of heavy metals from polluted water [33][34].

PAHs are known as genotoxic carcinogens and in cocoa beans can be produced during drying and roasting [35][36]. They are formed in roasted foods rich in carbohydrates through two processes: pyrolysis and pyrosynthesis [37][38]. The increased content of PAHs in cocoa beans is most often the result of inappropriate drying. The highest risk of contamination is present in artificial drying when producers use firewood or fossil fuel [39]. In addition, Ciecierska [36] concluded that even low temperatures during roasting of beans favor the development of PAHs. Since, most often, cocoa beans are roasted with cocoa shell, there is a high possibility that the cocoa shell is also contaminated with PAHs. Agus et al. [40] reported that roasted cocoa shell had lower amounts of PAHs than dried cocoa shell. This could be due to migration of these compounds in cocoa nibs during roasting.

During drying in cocoa farms, birds and insects frequently come into contact with cocoa seeds. They are transmitters of Escherichia coli and Salmonella [41]. Although cocoa beans are subjected to roasting, the research of Izurieta and Komitopoulou [42] showed that Salmonella strains present on cocoa shell were heat resistant. To minimize risk of contamination of cocoa beans, good hygiene and manufacturing practices should be implemented in cocoa farms. Leaving cocoa beans unprotected should be avoided so that contact with transmitters of contamination can be reduced [43].