Iron oxide nanoparticles are frequently used in various biomedical applications, in particular as magnetic resonance imaging contrast agents in liver imaging. Indeed, number of iron oxide nanoparticles have been withdrawn due to their poor clinical performance and/or toxicity issues. In the literature it has been criticized that failure of clinical applications is to a large extent due to poor understanding of the sub-cellular molecular targets of nanoparticles. Nanoparticles were found to change the activity of autophagic flux via lysosome-dependent signalling. However, precise underlying mechanisms of such modulation remain poorly understood.

Iron oxide nanoparticles (NPs) showed to be very useful in different biomedical applications [1-3]. Range of iron oxide NPs applications in biology and medicine is enormous, including targeted drug delivery, imaging, biosensors, and different therapeutic modalities [1][2][3][4][5][6][7]. Contrast agents for magnetic resonance imaging were the first nanoparticles to be approved for clinical use [8][9]. However, very soon those contrast agents have been withdrawn or discontinued due to various side effects [8][9][10][11], clearly indicating their overlooked cytotoxic potential.

Last year the U.S. National Cancer Institute (NCI) in Bethesda, Maryland cancelled funding for nanotech research centres [12]. This resulted in a swirl in bionano research, flooding the scientific literature with debates concerning clinical efficacy of nanotechnologies [13][14][15][16][17]. Recent studies of world-leading scientists in the area of nanoresearch pushed it towards a better understanding of fundamental intracellular signal modulations induced by nanomaterials [18][19]. Under a burden of accumulating evidence researchers start to realize that our current approach in bionano field is broken, and that is why we have not observed significant clinical translation of nanomedicines.

In fact, researchers start realizing that the liver is a predominant end point of the majority of intravenously administered nanoparticles [27]. Particles with diameter of ~ 150–200 nm have been shown to penetrate the space of Disse and interact with hepatocytes [28]. As a matter of fact, there are little known about molecular targets of interactions of hepatic cells with iron oxide NPs [27]. A direct comparison of the observed effects on closely related cell lines is lacking [27][28].

In the study we investigated how lysosomal-mediated signalling is changed upon iron oxide nanoparticle treatment in hepatic cells [29]. Our data showed that sub-lethal treatment with iron oxide NP leads to NP accumulation in lysosomes. Such NP accumulation in lysosomes results in drastic changes of lysosomal size and shape and, as a result, progressive impairment of lysosomal function. Lysosomal impairment in turn alters sub-cellular localization of pmTOR and p53 proteins. Further changes of sub-cellular localization of p53 protein induced by nanoparticle result in deregulation of the autophagic flux. Importantly, high levels of Bcl-2, that are expressed by certain cell lines, counteract autophagy initiated by nanoparticles. Altogether our data identify lysosomes as a central hub that controls nanoparticle-mediated responses in hepatic cells. 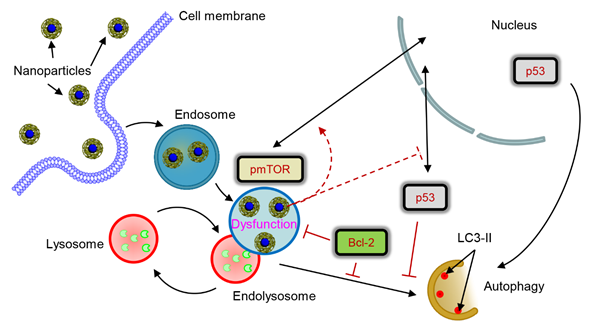