Although the mechanism of high-altitude adaptation which may involve complex multi-gene expression and interaction is not fully understood, modern multi-omics approaches allow for the identification of key functional genes, and their regulatory mechanisms including epigenetic modifications underlying high-altitude adaptation (Figure 1). High-altitude adaptation is a classic example of selective pressure shaping the human genome [57]. Genetic variations alone cannot explain all the biological variations [58] that leads to adaptive or maladaptive processes that happen in high-altitude dwellers. DNA methylation patterns established prenatally as well as early in the postnatal period are associated with methylation patterns later in life, and thus, they may be involved in the organism’s phenotypic response to their environment. This phenomenon is known as the predictive-adaptive response, which helps the cells to be ‘prepared’ long after the stimulus which caused the epigenetic mark is gone, thus providing cells with a memory about its previous experiences [59]. This provides the cells with an ability to adapt to a new environment when genetic variation is limited. Hence, epigenetic changes can potentially act as mechanisms of phenotypic plasticity [60] through altered biological pathways that improve reproductive fitness and survival under conditions of chronic hypoxia, and studying them may provide a means of identifying candidate biochemical markers of successful adaptation to high altitude, and thereby, lead to viable pharmacological interventions that may benefit hypoxemic patients. 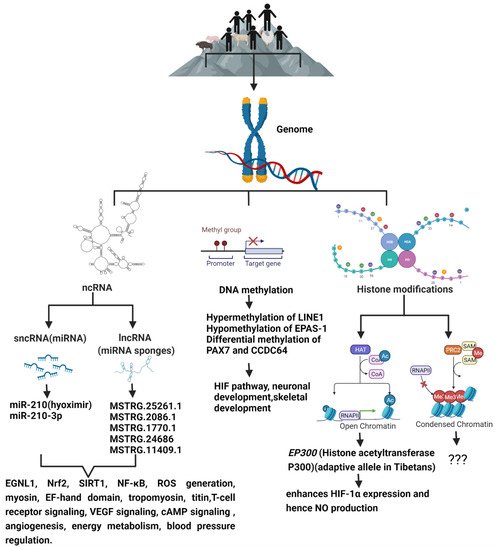 PH is a complex, chronic, progressive, severely debilitating, incurable, and life-threatening disease of the vascular and non-vascular components of lung leading to hemodynamic alteration of pulmonary circulation. As a result, PH patients suffer from increased pulmonary arterial pressure due to increased vascular resistance, which eventually culminates in right ventricular dysfunction and failure due to pressure overload. PH occurs due to a variety of genetic and pathogenic causes and also due to the environmental conditions to which one is exposed [61] and is characterized by pulmonary vasoconstriction and abnormal (“pseudo-malignant”) inward remodeling processes that may affect all vessel layers (intima, media, and adventitia) [62][63].
Global DNA methylation was increased in PH rat models after hypobaric hypoxia exposure. DNMT3B was upregulated in both PH patients and rodent models. Furthermore, Dnmt3b−/− rats exhibited more severe pulmonary vascular remodeling and inhibition of DNMT3B promoted proliferation/migration of PASMCs in response to PDGF-BB. In contrast, overexpressing DNMT3B in PASMCs was found to attenuate PDGF-BB-induced proliferation/migration and ameliorated hypoxia-mediated PH and right ventricular hypertrophy in mice. DNMT3B was also shown to transcriptionally regulate inflammatory pathways [64].
PH is also a hallmark of High-Altitude Pulmonary Edema (HAPE). Aberrant methylation in the apelin system could predict the risk of HAPE. HIF stimulates the secretion of apelin, a potent vasodilator during hypobaric hypoxia. HAPE patients show decreased apelin and nitrite levels as opposed to humans who are well-adapted to hypoxia. The increased methylation of the apelin CpG island, and hence, a lower secretion of apelin and, consequently, lower NO levels, could contribute to the pathology of HAPE due to impaired vasodilation [65].
The above-mentioned studies point to the probable role of epigenetic alterations in the genome of high-altitude living beings and in the pathology of HAPH. Contrasting to genetic mutations, epigenetic changes are pharmacologically reversible, making them an attractive target as therapeutic strategies for HAPH.

Exosomes are the smallest type of extracellular vesicles (30–100 nm) released by almost all cells of the human body both in health as well as in diseased conditions [66]. During its initial discovery, they were thought to carry unwanted waste materials. However, later studies show that they act as messengers communicating between cells of different tissues by influencing the physiological and metabolic pathways of recipient cells [67]. Exosomes carry varied and useful cargo load, which includes cell membrane proteins, enzymes, growth factors, cytokines, DNA, mitochondrial DNA (mtDNA), mRNAs, lncRNAs, miRNAs, small nucleolar RNAs (snoRNAs), and lipids. They also carry signaling molecules and help in tissue remodeling [68]. The field of exosomes is a rapidly growing area in basic research, biomarker discovery, as well as in regenerative therapy, and even in nano biotechnology, as nanocarriers of drugs because of their viral-like transfection efficiency and inherent biological functions. Exosomes are enriched with molecules such as CD63, CD9, and CD81, Alix, and TSG101, which serve as markers for exosomes; however, the distribution of these surface molecules varies greatly depending on the cell type [66]. The exosomes are also a source of several potential biomarkers that are well correlated with the disease’s severity [69].
The lungs are a complex organ with a wide variety of cell types. Hence, exosomes are thought to play an important role in lungs during cell–cell communication. The lungs are also the organ with the highest vascular density in human body. It is very much understandable that the lungs contribute to the majority of exosomes that are circulating in the blood. Exosomes are released by a wide range of cell types present within the lungs, including endothelial cells, stem cells, epithelial cells, alveolar macrophage, and tumor cells [70]. During disease conditions, this exosomal load can be higher or lower depending on the stimuli, and the exosomal cargo may also vary widely depending on the infecting organism, immune system players, and the inflammatory microenvironment [71].

Exosomes are secreted by most cells of humans and are found abundantly in body fluids, such as saliva, plasma, serum, cerebrospinal fluid, and urine [72][73][74][75][76]. Hence, exosomes can be isolated easily from plethora of body fluids—thus, they are easily sampleable. In cancer biology, liquid biopsies have revolutionized the field of biomarker discovery, and exosomes play a pivotal role [77][78][79]. Exosomes from liquid biopsies are extremely stable and their phospholipid bilayer protects their bioactive cargo from degradation [80][81]. DNA methylation appears to be cell-type specific, which poses challenge in human studies done using whole blood because sampling is usually limited to the analysis of peripheral blood cells, which may or may not reflect systemic adaptations. Exosomes can overcome this challenge as their isolation and analytic techniques has gotten more and more refined. Exosomes from serum or plasma also reflect the exosomal content from many different tissues and cells of body. However, advancement in exosomal biology allows us to identify and separate exosomes from a particular tissue by its membrane protein content [82], and hence, studying their genomic content can be more specific and fruitful in terms of understanding a specific organ’s epigenetic profile during health and disease rather than from whole blood.
Exosomes carry unique sets of mRNAs, rRNAs, miRNAs, lncRNAs, and other small non-coding RNAs (ncRNAs, e.g., piRNAs, snRNAs, snoRNAs, scaRNAs, and Y-RNAs) [83][84]. Some miRNAs that are abundant in parent cells are also most commonly found in exosomes, hence making them excellent tools for biomarker discovery. However, this is not always the case [83][85]. The majority of microRNAs detectable in serum and saliva were found to be concentrated in exosomes [86]. It has been reported that the absolute amounts of miRNAs are estimated to range 1 × 102–1 × 105 copies per cell [87], while a single exosome can carry up to approximately 500 copies of miRNAs [87]. With the current advances in next-generation deep sequencing (NGS), the entire spectrum of known and novel miRNA can be profiled with minimal RNA input and hence analysis of exosomal RNA has become much feasible [88]. The most important limitation in working with exosomes is their nanosize, and hence, the laborious and time-consuming ultracentrifugation steps that are involved in their isolation. However, recent advancements in the exosomal isolation kits that are available in market has decreased the burden of extensive ultracentrifugal steps without having to compromise exosomal quality [89]. The coming years might prove to be comparatively trouble-free and cost-effective as far as exosome isolation is concerned. International Society for Extracellular Vesicles provides guidelines to be followed for the publication of EV (extracellular vesicle) studies [90].
All this makes exosomes a good tool for epigenetic research, and it would be very helpful to discover epigenetic adaptive and maladaptive pathways in indigenous populations occupying high-altitude environments or in sojourners (Figure 2). 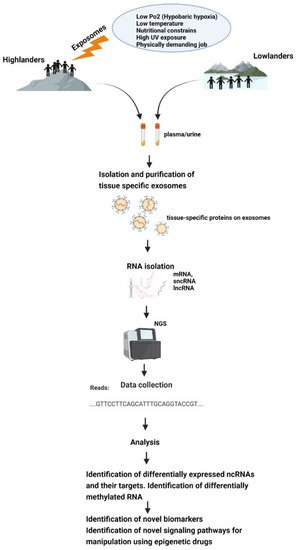 Figure 2. Schematic representation of how exposomes affect the epigenome of high-altitude dwelling living organisms—which could be studied using exosomes.