After myocardial infarction (MI), tethering and fibrosis of mitral leaflets stimulate functional mitral regurgitation (MR), resulting in high morbidity of heart failure (HF) and cardiac mortality [1][2][3][4][5][6][7][8]. As secondary functional MR usually develops as a result of left ventricular (LV) dysfunction [1][6], medications for HF such as beta blockers, angiotensin-converting-enzyme (ACE) inhibitors, and angiotensin receptor blockers (ARBs) are the mainstay of medical therapy for functional MR [9][10]. However, the pharmacological treatment has not been found to be sufficient for reducing ischemic MR or reversing the adverse LV remodeling [5][11][12].
Post-MI changes in the mitral valve (MV) are associated not only with LV remodeling, but also with an excessive endothelial-to-mesenchymal transition (EndoMT) by transforming growth factor-β (TGF-β) overexpression [13][14]. Fibrotic remodeling and thickened leaflet of MV make leaflet area insufficient and cause inadequate adaptation, which finally results in coaptation failure of mitral leaflets and facilitates functional MR [15][16][17][18][19][20]. Therefore, inhibition of EndoMT by blocking TGF-β expression or its downstream signaling may offer a strategy to prevent inadequate adaptations and effectively mitigate functional MR.
Reducing functional MR is highly beneficial to the clinical outcomes of patients with MI or HF. A recent randomized trial found that reduction of functional MR by transcatheter MV repair resulted in a lower rate of hospitalization for HF and lower mortality in patients with HF and significant secondary MR [21]. Furthermore, we recently performed a double-blind, randomized clinical trial, which demonstrated that angiotensin receptor-neprilysin inhibitor (ARNI) treatment effectively reduced functional MR more than ARB alone in patients with LV dysfunction [22]. Although ARNI therapy has shown potential to promote reverse remodeling of LV in this clinical trial, little is known about the mechanism responsible for the beneficial action of neprilysin inhibition on functional MR.
ARNI is a combination drug of sacubitril, a neprilysin inhibitor, and valsartan, an ARB [23]. In the PARADIGM-HF trial [24], ARNI treatment was found to have substantial benefits in reducing all-cause mortality and hospitalization among HF patients with reduced ejection fraction when compared to enalapril, an ACE inhibitor. In addition to the effect as an ARB, the mechanism of beneficial action of neprilysin inhibition includes enhancement of endogenous natriuretic peptide, which facilitates sodium excretion and has vasodilating effects [25][26], and inhibition of cardiac fibrosis and hypertrophy [27]. Natriuretic peptides are hormones produced from heart or vascular endothelium in response to preload or afterload, and fluid retention through specific receptors [28].

Two weeks after occluding the left circumflex coronary artery in SD rats, significant post-MI LV dilatation was confirmed (Figure 1A) along with wall motion abnormality and ischemic fibrosis in posterolateral wall of LV (Figure 1B,C). The schematic of the study protocol is illustrated in Figure 1D. There was no significance difference in LV dilation and systolic function between the three groups at 2 weeks (Figure 1E). Six weeks after MI and randomization, all of 31 experimental rats survived well and there was no significant difference in serial changes of body weight between the three groups; LCZ696 treatment, valsartan treatment, and MR control group (Figure 1F). 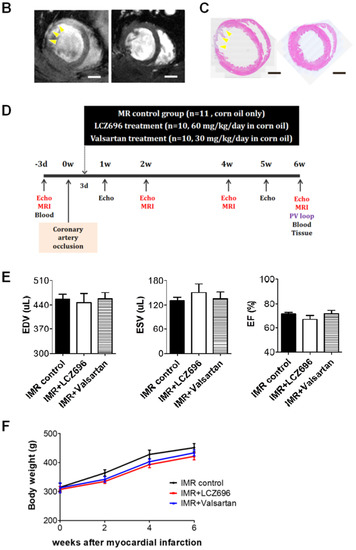 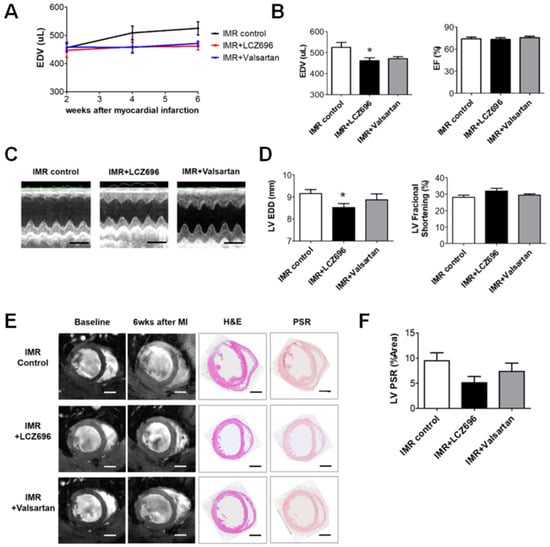