Ciguatera in the Indian Ocean

Ciguatera poisoning is regarded globally as the most significant non-bacterial poisoning associated with fish consumption. It is usually limited to the consumption of toxic fish from regions between the latitudes 35° N and 35° S. Studies have shown a strong positive correlation between Gambierdiscus abundance and algal macrophytes. Some earlier studies proposed a standardized methodology for estimating Gambierdiscus abundance based on sampling macroalgae.

Ciguatera poisoning (CP) is a syndrome caused by ingestion of coral reef fish and shellfish of tropical and subtropical regions, which has caused global concern. Some dinoflagellate species of the genera Gambierdiscus and Fukuyoa are known to produce ciguatoxins (CTXs); the organisms that consume these toxic algae accumulate CTXs that are transferred and biotransformed along the marine and human food chain. These lipid-soluble and heat-resistant toxins cause gastrointestinal, cardiovascular, and neurological disorders among humans consuming the CTX-contaminated seafood [1][2][3][4][5]. According to a study published in 2008, CP disease estimations are uncertain and often misdiagnosed [6]. However, few reports predict 2–10 million people are annually affected by CP [7][8].

Ciguatera poisoning is regarded globally as the most significant non-bacterial poisoning associated with fish consumption. It is usually limited to the consumption of toxic fish from regions between the latitudes 35° N and 35° S [9][10][11][12][13][14][15][16][17]. Studies have shown a strong positive correlation between Gambierdiscus abundance and algal macrophytes [18]. Some earlier studies proposed a standardized methodology for estimating Gambierdiscus abundance based on sampling macroalgae [19][20][21]. More recent studies brought to light the significant biases in Gambierdiscus cell distribution within the macrophytes. A 33–150% variation was reported among replicates [22][23][24]. Despite these limitations, some first-order estimates on Gambierdiscus distributions for large geographic regions have been attempted using the average abundances [11][25]. These have shown a global distribution spreading across oceans with 85% of Gambierdiscus density estimates <1000 cells g −1 wet weight algae, with <10% occurrence with 10–10,000 cells g −1 wet weight algae and <5% incidences where the concentration was >100,000 cells g −1 wet weight algae. With the growing global demands for seafood and international trade ease, CP concerns the population beyond the endemic regions and is increasingly becoming a global issue. Moreover, a greater threat is posed as there are no current antidotes for CP [26].

Historically, poisoning associated with seafood consumption was reported in different parts of the globe. It was first recounted in the West Indies as early as 1511 [27] and in the Gulf of Guinea in 1521, killing the Captains of the Spanish army [28]. It was also reported in the islands of the Indian Ocean in 1601 and various archipelagos of the Pacific Ocean in 1606 [27]. Additionally, in 1786, the surgeon of HMS Endeavour, en route to Australia, New Zealand, and the Pacific Islands, reported that the ship’s Captain was poisoned by ciguatoxins [29]. A year later, the ingestion of a local gastropod ( Livonia sp.) was discovered to induce neurological symptoms in the Antilles of the Caribbean Sea [30]. In 1948, the organism Gambierdiscus (originally referred to as Goniodoma sp.) was described for the first time in Cabo Verde [31]. The term “ciguatera poisoning” was coined in Cuba (Caribbean Sea) after the ingestion of a marine snail ( Turbo pica ) locally known as cigua [32]. The historical facts suggested the tropical and subtropical Pacific and Indian Ocean insular regions, the tropical Caribbean region, and the continental reefs to be endemic to ciguatera [27].

In recent years, there has been an increase in the frequency of reports of toxic and harmful benthic algal blooms, predominantly Gambierdiscus with the presence of Fukuyoa and Ostreopsis blooms, throughout the world [33][34]. The interest in Gambierdiscus blooms has been heightened because of increased awareness of the effects of CP on human health. A growth in species abundance has already been observed in subtropical and temperate regions with the threat of global warming expected to further exacerbate the situation [35][36][37][38]. However, a recent article by Hallegraeff et al. [39] suggested that intensified monitoring efforts and heightened aquaculture activities are responsible for these perceived increases in HABs events that are not underpinned to be expanded as an empirical assumption. Ciguatoxins are reported globally, being described from new sites in the Canary Islands, Indian Ocean, Japan, and Western Gulf of Mexico [8][40][41][42][43][44][45]. Until recently, the records of Gambierdiscus in the Indian Ocean were scarce and restricted to the western tropical region, whereas now its presence has been found in the Northern part of the ocean [42]. There is a paucity of information on ciguatera phenomena, including the occurrence of human poisonings, of toxins in seafood, and of the causative organisms, in the Indian Ocean in general, and the northern part in particular. In the present review, we gathered the published information on reported occurrences of Gambierdiscus and identified the research gaps related to its monitoring as a tool to manage this emerging hazard.

2. Ciguatera in the Indian Ocea

The Indian Ocean is the third largest ocean enclosing densely populated landmasses: In the North, India, Bangladesh, Burma, Thailand, Pakistan, Iran, and Oman among others. It also includes regional seas in the North such as the Arabian Sea and the adjacent Lakshadweep Sea, Aden Gulf in the Red Sea, the Gulf of Aqaba and Suez, the Bay of Bengal and the Andaman Sea, as well as the Gulf of Oman and the Persian Gulf further north. Countries from the Indian Ocean region have experienced unusual climatological conditions such as cyclones, El Niño-Southern Oscillation events, and coral reef bleaching during the past two decades [46][47][48]. Benthic microalgae are particularly influenced by these disturbances especially the coral mortality, which provides a good substrate for the formation of algal turfs and associated epiphytes [49]. The study conducted by Quod et al. [46] reported a significant increase in the CP causative organisms in comparison to those reported in 1980 [47], following the coral bleaching event in 1998, thus posing an incremental risk of HABs in the region and drawing detrimental consequences to the marine biodiversity and human health [50].

The unfavorable effects of increasing atmospheric levels of carbon dioxide (CO2) and other greenhouse gases in the Indian Ocean and its marginal seas are leading towards acidification of the marine environment [48][51][52][53]. Supporting evidence for increased CO2 sequestration was drawn from increased marine primary productivity over the past decade [51][54]. The eutrophication of Kuwait Bay and the nearby water bodies due to upwelling events is considered to be a predominant factor influencing the onset of algal blooms due to enriched nutrient conditions [54]. Other potential factors that have influenced the onset of blooms consist of coral bleaching, unusual variances in temperature, and calm conditions. Additional factors such as dust storms that carry micronutrients, domestic and industrial inputs, natural meteorological and oceanographic forcings, and the introduction of invasive species from ballast water discharge may all play a major role in the onset and expansion of HABs [41][45][55][56][57][58]. 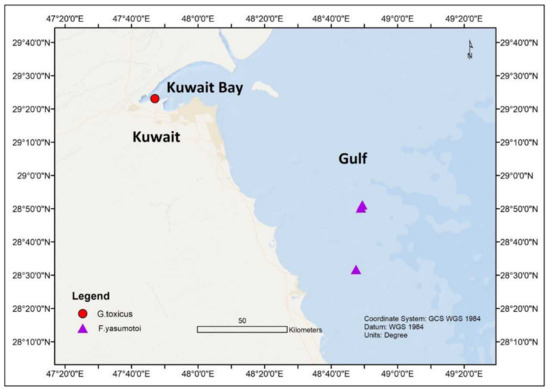 In the northern part of the Indian ocean, the cell numbers of Gambierdiscus from the central Red Sea, Saudi Arabian coast were <40 cells g −1 ww of algae [43][44]. Similarly, F. yasumotoi in Kuwaiti shores had an average cell density of 116.7 ± 47.5 cells g −1 of ww algae. The high biomass algae (HABs) were estimated through the Ocean Color Modis Algorithm (OC3M), Garver-Siegel-Maritorena Algorithm (GSM), Generalized Inherent Optical Property (GIOP) model [41][45]; these areas when sampled showed the presence of G. toxicus in a concentration of ~1000 cells per liter of seawater [41].

A variety of techniques are known to be used for ciguatera identification at a particular site. These include light microscopy (LM), scanning electron microscopy (SEM), DNA sequencing, restriction fragment length polymorphism (RFLP), quantitative polymerase chain reaction (qPCR), and metabarcoding [8][62]. While performing the morphological identification, the taxonomic key reported earlier [25] was followed by the research groups to confirm the species of Gambierdiscus found in the region. Earlier in the 1990s, SEM was used for the identification of G. toxicus from Reunion Islands [63]. SEM was also used recently to identify the species of G. toxicus ; G. belizeanus ; G. polynesiensis ; G. australes; and F. yasumotoi [60]. The morphological identification of Gulf strains of G. yasumotoi and G. belizeanus was based on both LM and SEM [42][43][44]. A description of morphological parameters of strains present in the Indian Ocean region is given in Table 2 .

Owing to the plasticity of morphological characteristics of some species of Gambierdiscus, the identification can be ambiguous if only morphology is used. Currently, molecular techniques are gaining popularity for the confirmation of species identified through microscopic methods. The only report on molecular identification of Gambierdiscus in the Arabian Gulf was by Catania [43] and her team [44]. The group amplified an 850 bp hypervariable (D8-D10) region of the larger subunit (LSU) of rRNA using primers FD8 and RB [11][25] through Sanger sequencing. A query of assembled nucleotides on the National Centre for Biotechnology and Informatics (NCBI) through the basic local alignment search tool (BLAST) resulted in a 100% match with G. belizeanus. Their (KY782637–KY782645) strains depicted a close resemblance with the Caribbean strain of G. belizeanus. The group also reported a 116 bp deletion at 493–609 position in one of the isolates, probably imparting the distinctiveness from other species of Gambierdiscus [68][69].

More diversity in clade IV and V including the species discovered from Indian Ocean may be due to a smaller number of samples owing to the recent discovery of these species. The presence of unclassified Fukuyoa sps. and Gambierdiscus ribotypes in these clades are suggestive of unexplored novel species. In 2016, at the 32nd session of the Codex Committee on Fisheries and Fishery Products, the Pacific Nations raised CP as an issue that is increasingly affecting the tropical and subtropical regions of the Pacific Ocean, the Indian Ocean, and the Caribbean Sea between the latitudes of 35° N and 35° S [8]. The strains found in the Indian Ocean and their adjoining seas lie near the strains commonly found in these high-risk regions. Probably, the interconnection between the water bodies and the ballast water is the major source of ciguatera infiltration in the Indian Ocean waters. Given this, extensive monitoring and risk management program should be developed for the unexplored regions and specifically in the Middle East region.

Ciguatera research in the Indian Ocean region is limited and fragmented. Although, there are reported cases of CP in the region. The most significant toxic fish in the region were barracuda (Sphyraenidae), amberjack (Seriola), grouper (Serranidae), snapper (Lutjanidae), po’ou (Labridae spp.), jack (Carangidae spp.) , trevally (Caranx spp.), wrasse (Labridae spp.), surgeonfish (Acanthuridae spp.), moray eel (Muraenidae spp.), roi (Cephalopholis spp.), parrotfish (Scaridae spp.), seabass, shark, and red snapper to name a few. Since the region exports fisheries, some of the fish originating from India and Sri Lanka in 2012, 2015, and 2016 were implicated in ciguatera poisoning in Europe.

A comprehensive survey of algal substrates in the region complemented with high throughput metabarcoding would provide insights into novel and undiscovered contributors of ciguatera. Although less in numbers, the presence of ciguatera causative organisms in the region cannot be ignored and their interaction with substrate and other microbial species is worthy of further investigation. The development of an early warning system for HABs is very much the need of the hour.