Very long-chain (˃C24) fatty acids (VLC-FA) play critical roles during early development of vertebrates, since these compounds are accumulated in the rapidly forming neural tissues, ensuring their normal function. However, despite their putative importance, the study of VLC-FA in fish is scarce. Biosynthesis of VLC-FA is carried out by the so-called elongation of very long-chain fatty acid 4 (Elovl4) proteins and, consequently, the complement and function of these enzymes determine the capacity that a given species has for satisfying the physiological demands for VLC-FA, especially during its early development. The present study aimed to characterize elovl4 genes from the marine teleosts Sparus aurata and Solea senegalensis, and determine the function of the corresponding encoded proteins. Moreover, the tissue expression pattern of elovl4 genes was determined. The results confirmed that both fish species possess two distinct Elovl4 proteins termed as Elovl4a and Elovl4b based on their homology to the zebrafish orthologs. Functional assays in yeast denoted that both Elovl4a and Elovl4b from both species had the capability to elongate C20-24 fatty acid precursors to VLC-FA products. However, Elovl4b appeared to have a higher activity than Elovl4a elongating all the polyunsaturated fatty acid substrates assayed to longer chain polyunsaturated products, especially on the n-3 series. Gene expression results indicated that, although elovl4 transcripts were detected in most tissues analyzed, elovl4 genes were more strongly expressed in both species neural tissues such as brain and eyes, which showed the highest expression levels of elovl4a and elovl4b, respectively. These results are consistent with the functions of Elovl4 from other vertebrates. Importantly, these findings contribute to a better understanding of the VLC-FA biosynthetic pathway in marine teleosts, highlighting the crucial role that Elovl4 products carry out for the correct development and maintenance of neurophysiologic functions during early stages of the fish development.

Certain long-chain(C20-24) polyunsaturated fatty acids (LC-PUFA), namely eicosapentaenoic acid (EPA; 20:5n-3), arachidonic acid (ARA; 20:4n-6) and docosahexaenoic acid (DHA; 22:6n-3), are regarded as physiologically essential for the correct development of vertebrates, including fish [1]. These compounds can be obtained through the diet or, alternatively, biosynthesized from C18 polyunsaturated fatty acids (PUFA), such as α-linolenic acid (18:3n-3) and linoleic acid (18:2n-6) via enzymatic reactions carried out by fatty acyl desaturases (Fads) and elongation of very long-chain fatty acid (Elovl) proteins [1][2]. Fads are enzymes that introduce double bonds (unsaturations) into PUFA substrates. On the other hand, Elovl are considered pivotal components of fatty acid (FA) synthetic pathways [3][4], being responsible for a condensation reaction which results in the extension of the pre-existing FA chain with two new carbon atoms [1]. The Elovl protein family contains several members (Elovl1-8) [2][3][4][5][6], but only Elovl4 catalyzes the synthesis of very long-chain (>C24) saturated (VLC-SFA) and polyunsaturated fatty acids (VLC-PUFA), which can have up to 36 or 38 carbons [1][7]. Furthermore, Elovl4 is additionally responsible for the production of very long-chain saturated fatty acids (VLC-SFA) [8].

Virtually all teleosts possess at least two Elovl4 isoforms termed as “Elovl4a” and “Elovl4b” [2][9]. However, their functions seem to vary among species, highlighting that the investigation of Elovl4 proteins in teleosts requires a species-specific approach. The gilthead seabream (Sparus aurata) and Senegalese sole (Solea senegalensis) are two commercially important species in marine finfish aquaculture. A recent study has highlighed a relationship between the expression of elovl4 genes in both species and the formation of neural tissues during early life-cycle development [10]. Indeed, Elovl4 products, i.e. VLC-SFA and VLC-PUFA, play crucial roles during early-development of vertebrates by guaranteeing the correct development and functionality of the rapidly forming nervous system where these compounds accumulate [8][10]. Thus, due to the importance of very long-chain fatty acids (VLC-FA) during early development, it is crucial to understand the capacity that a given species has for endogenous production of these essential nutrients. Such ability is itself dependent on the complement of elovl4 genes and the functions of their corresponding encoded enzymes [1]. Previous studies investigating the functions of fads- and other elovl-like genes confirmed that both fish species operate different LC-PUFA biosynthesis mechanisms [11][12][13][14], especially with regard to production of DHA. In particular, Sa operates the so-called “Sprecher pathway” [11][15] whereas Ss produces DHA via the more direct “Δ4 pathway” [14] (Figure 1). Considering that both the LC-PUFA and VLC-PUFA biosynthetic pathways are interdependent, the aim of the present study was to characterize, both molecularly and functionally, elovl4 paralogs from S. aurata (Sa) and S. senegalensis (Ss) and discuss the biosynthetic particularities of both species. Cloning of the elovl4 full-length cDNA was carried out using PCR-based methodologies and brain-eye mix (1:1) cDNA as template. The PCR fragments were then purified and sequenced at least two times. In order to obtain the full-length ORF sequences, two-round (nested) Rapid Amplification of cDNA ends (RACE) PCR were performed. Potential positive fragments were cloned into pGEM-T Easy cloning vector and ligated with T4 DNA ligase. The plasmid preparations were purified and sequenced. The putative elovl4 sequences were thus obtained and deposited in the GenBank database as gb|MK610320 (Sa elovl4a), gb|MK610321 (Sa elovl4b), gb|MN164537 (elovl4a) and gb|MN164625 (elovl4b).

The Sa and Ss putative Elovl4 elongases were functionally characterized by determining the FA profiles of Saccharomyces cerevisiae transformed with pYES2 yeast expression vector containing the putative elovl4 as inserts, and grown in the presence of potential FA substrates.

The elongation of endogenous saturated FA with 24 carbons or longer was assessed by comparison of the areas of the fatty acids of control yeast with those of yeast transformed with each of the pYES2-elovl4 plasmid constructs (n=3). In the case of VLC-PUFA, the elongation conversions of exogenously added PUFA were calculated as (area of first product and longer chain products/(area of first product and longer chain products + substrate area)) × 100.

Expression of elovl4 isoforms in each tissue from one specimen of gilthead seabream and Senegalese sole was analyzed by reverse transcriptase PCR (RT-PCR), using 18s ribosomal RNA (18s) as a reference gene. Expression of elovl4a and elovl4b in selected tissues that showed a strong signal in RT-PCR analyses (brain, eye and gonad) was analyzed by qPCR using β-actin (actb) as reference gene (n=3).

The Sa and Ss elovl4a ORF sequences have 969 base pairs (bp) and 960 bp, encoding putative proteins of 322 amino acids (aa) and 319 aa, respectively. On the other hand, Sa and Ss elovl4b ORF sequences contain 918 bp, encoding proteins of 305 aa. The phylogenetic analysis showed that both Elovl4 sequences from each species form two separate clusters that include either Elovl4a or Elovl4b sequences from a range of teleosts (Figure 2). 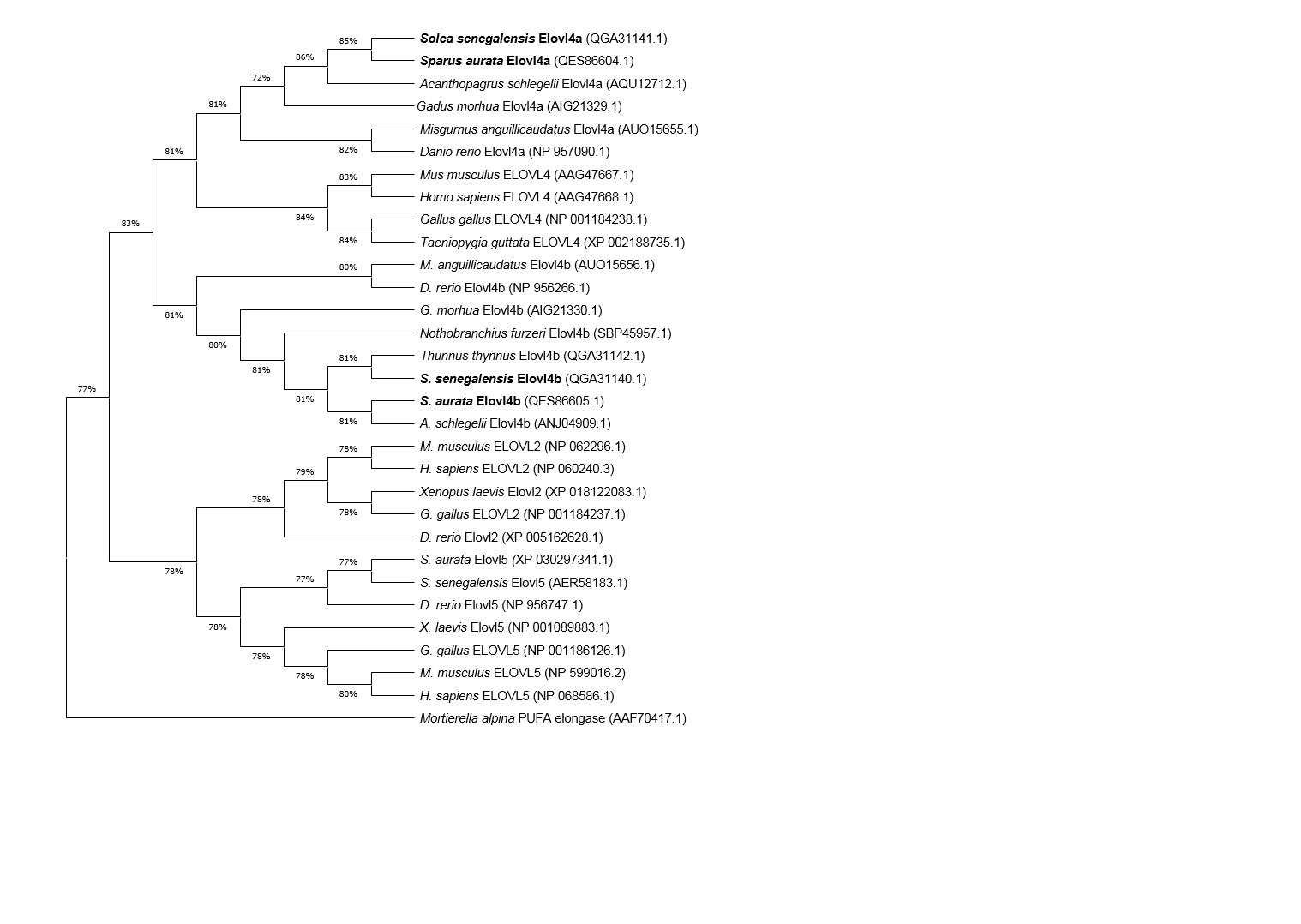 Figure 2. Phylogenetic tree comparing Sparus aurata and Solea senegalensis Elovl4a and Elovl4b proteins (highlighted in bold) with Elovl2, Elovl4 and Elovl5 proteins from other vertebrates. The tree was constructed using the Maximum Likelihood method and JTT matrix-based model. The numbers in branches represent the frequencies (%) of each node after 1000 iterations by bootstrapping. The Mortierella alpina PUFA elongase was included in the analysis as an outgroup, to construct the rooted tree.

The results confirmed that both Sa and Ss Elovl4 isoforms are involved in the biosynthesis of VLC-SFA (Table 1A-B). These results suggest that 26:0 is an important substrate for both Sa Elovl4 proteins (Table 1A). Moreover, Ss Elovl4 proteins are involved in the biosynthesis of VLC-SFA up to 26:0 for which they use <C24 fatty acids as elongation substrates (Table 1B). Furthermore, the chromatographic analyses of Elovl4-transformed yeast revealed that Sa Elovl4a elongated all n-6 PUFA substrates, as well as n-3 PUFA substrates (Table 2). Sa Elovl4b also elongated n-6 PUFA substrates, but showed particularly high affinity towards n-3 PUFA substrates, especially to elongate 22:6n-3 (DHA) substrates to 32:6n-3 (Table 2). For Senegalese sole, both Elovl4 elongases presented the capability to elongate PUFA substrates from the n-3 and n-6 series, to longer chain FA of up to C34 (Table 2). It is noteworthy that Ss Elovl4b, and to a lesser extent Elovl4a, showed high capacity to elongate 20:5n-3 (EPA) to 22:5n-3, a key step required for DHA synthesis via the Δ4 pathway.

Table 2. Functional characterization of the Sparus aurata (Sa) and Solea senegalensis (Ss) Elovl4a and Elovl4b elongases by heterologous expression in the yeast Saccharomyces cerevisiae. Data are presented as the percentage conversions of polyunsaturated fatty acid (FA) substrates (n=1). Individual conversions were calculated according to the formula (area of first product and longer chain products/(area of first product and longer chain products + substrate area)) × 100. 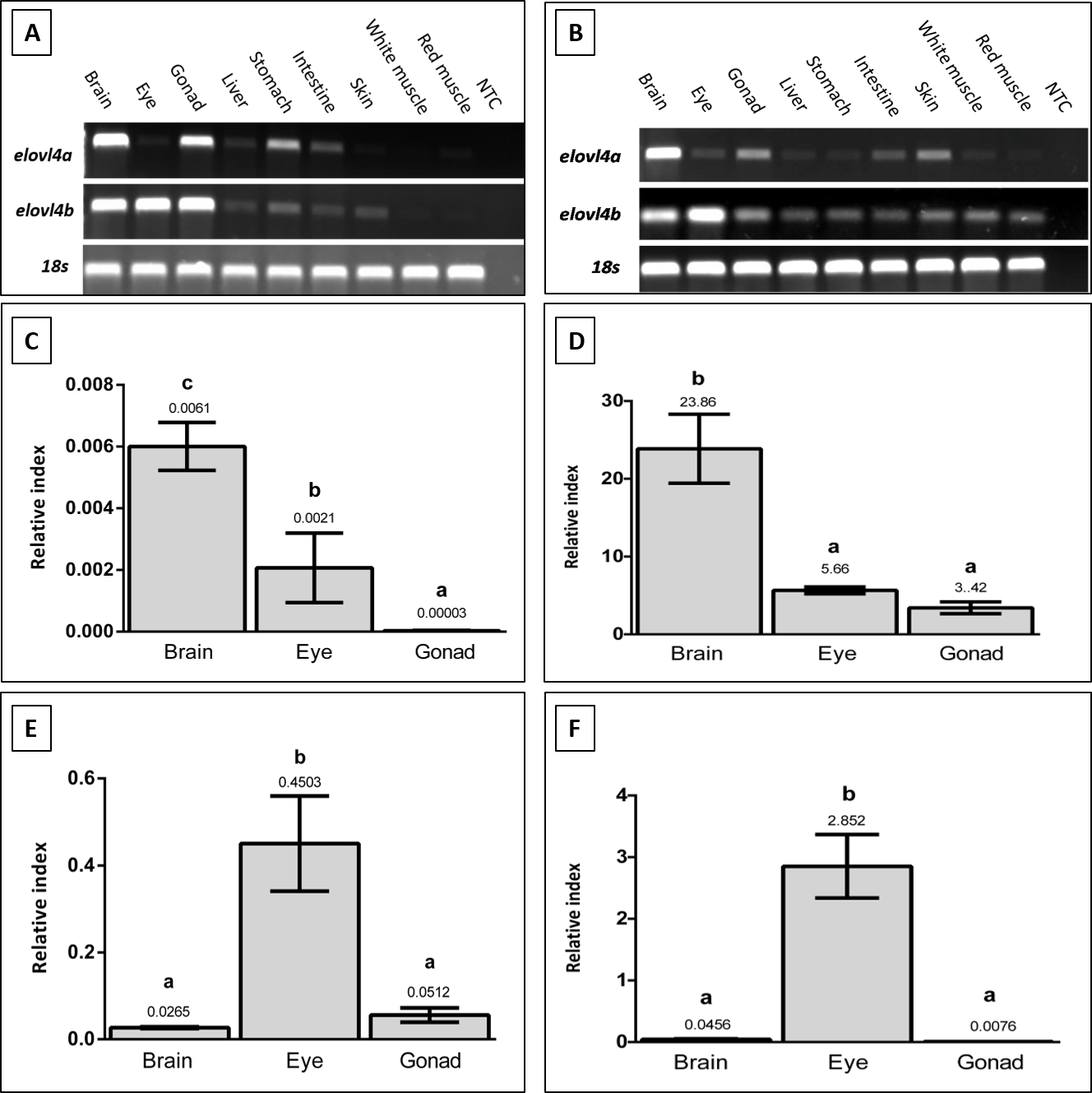 Sequence analyses revealed that the investigated predicted Elovl4 proteins contain all characteristic domains of vertebrate Elovl4 family members [16][17]. Moreover, phylogenetic analysis confirmed that the described Elovl4 isoforms are true orthologs of the Elovl4a and Elovl4b proteins present in teleosts [2]. So, the conservation of both Elovl4 isoforms in fish genomes [2][9][18][19][20][21] and their clear segregation into separate clusters points towards a likely functional specialization of these proteins in teleosts [22][23], which we aimed to further elucidate in this study by functionally characterizing the two isoforms in two new fish species with diverse life histories, dietary habits, and notably different LC-PUFA biosynthesis mechanisms [11][12][13][14].

As suggested in previous studies with other fish species, including Danio rerio [9], Clarias gariepinus [18] and Salmo salar [24], our results support the notion that both isoforms can participate in VLC-SFA elongation. Nevertheless, similarly to what was reported in D. rerio [9], Elovl4a seems to be more efficient than Elovl4b at elongating VLC-SFA. Notably, the functional characterization of Ss Elovl4 enzymes showed some differences with respect to Sa, particularly concerning the preferred fatty acid substrates. Moreover, functional analyses of Elovl4a and Elovl4b confirmed that both proteins participate actively in the biosynthesis of either n-6 or n-3 VLC-PUFA, from n-6 and n-3 PUFA substrates, in the two studied fish species. However, intra- and inter-specific differences were found in the efficiency of the different Elovl4 isoforms to biosynthesize VLC-PUFA. This differences could be related with different VLC-SFA and VLC-PUFA requirements between the two fish species [10], but further studies are necessary to clearly establish this. It is also noteworthy that, similar to what has been described in zebrafish [9], both Sa and Ss Elovl4a elongases showed low elongation activity from DHA to 24:6n-3. This could suggest that, as described in rat retinas [25], EPA and not DHA might be the preferred substrate for VLC-PUFA biosynthesis in fish. Similarly to what has been found in other teleosts [18][19][26], Elovl4b proteins in both species were able to elongate 24:6n-3 up to 32:6n-3, a VLC-PUFA found in retinal phosphatidylcholine in fish [27][28]. Thus, this specific activity of Elovl4b proteins, along with the above mentioned presence of 32:6n-3 in fish retina, is coherent with the tissue expression results obtained for both species, in which Elovl4b transcripts were mostly found in the eye suggesting that, similarly to what has been described in other teleosts like Thunnus. thynnus [26], D. rerio [9], Acanthopagrus schlegelli [19], Oncorhynchus mykiss [23], S. salar [24] or Epinephelus coioides [29], this is a major tissue for VLC-PUFA biosynthesis.

The quantitative expression results confirmed previous evidences of a differential elovl4a and elovl4b tissue-specific expression pattern [10][30], with elovl4a being mostly expressed in fish brain [9][18][19][23], and elovl4b in eye [9][19][23][24][26][29]. This results suggest a role of these enzymes in the local biosynthesis and incorporation of VLC-FA in fish neural tissues. This is in agreement with what is known in mammals [8], in which VLC-PUFA are key functional components, essential for the development and cell protection, of neural tissues such as those found in retina or brain [7][31][32]. Moreover, as previously described [10], retinogenesis in gilthead seabream and Senegalese sole larvae is clearly synchronized with an increase in expression of both elovl4 genes. Consequently, as described in mammals [33], alterations in VLC-PUFA biosynthesis could negatively impact visual acuity and disrupt brain functionality, jeopardizing the normal development of fish. This is particularly relevant in visual predators such as gilthead seabream and Senegalese sole, which previously showed a differential elovl4 expression in larvae and postlarvae according to the VLC-PUFA putative needs associated with each life-stage and LC-PUFA dietary availability [10][30]. Thus, the application of this knowledge is of special relevance during early larval development, particularly in species with high commercial interest for aquaculture production, as is the case of gilthead seabream and Senegalese sole, and should be kept in mind in feeding protocols during hatchery rearing.