Green infrastructure has a role to play in climate change adaptation strategies in cities. Alternative urban spaces should be designed considering new requirements in terms of urban microclimate and thermal comfort. Pervious pavements such as green parking lots can contribute to this goal through solar evaporative cooling. However, the cooling benefits of such systems remain under debate during dry and warm periods.

The urban heat island (UHI) phenomenon is triggered by several factors, such as the specific urban land cover, the canyon-shaped infrastructure morphology, the anthropogenic heat emissions, and the physical properties of the urban materials [1][2]. Many studies focus on identifying different patterns of urban expansion and their consequences on the urban microclimate [3][4][5][6]. Cai et al. [3] studied the influence of urbanization on the urban climate. They observed that the arrangement of urban areas in relation to water and vegetated areas affects energy fluxes. Several methods are proposed for reporting different types of land use. A major approach is the use of land cover indices [7][8], followed by the classification methods [9]. Jalan and Sharma [10] used land surface temperature (LST) to quantify the spatiotemporal changes in the UHI of Jaipur city (India). They found that urbanization affects the LST by about 3 °C.
Urbanization processes tend to increase the fraction of sealed and impervious surfaces. However, urban facets significantly influence the urban climate. Urban facets often demonstrate specific hygrothermal properties (e.g., low albedo, and reduced water absorption and retention), which lead to extreme surface temperature.
The development of sustainable and resilient cities requires alternative solutions and concepts, such as nature-based solutions (NBS) or green infrastructure (GI) [11]. Zölch et al. [12] reported that GI affects pedestrians’ thermal comfort. They conducted a study on high-density residential areas under current and future climatic conditions. GI (planting trees) demonstrates the strongest impact with an average physiological equivalent temperature (PET) reduction of 13% compared with existing vegetation. At ground level, several new pavement technologies are emerging, including pavement watering, reflective pavement, pervious pavement, and heat storage pavement [13].
Green parking lots (GPLs) are now being suggested as potential solutions for urban water management and UHI mitigation [14]. Onishi et al. [14] studied the influence of vegetation on urban parking in Nagoya city, Japan, during the warm period (spring and summer). They showed that parking with grass slightly reduced the LST (maximum LST decreased by 7.26 °C in the summer for one GPL). Park et al. [15] conducted a study of GPLs in Ulsan, Korea. They observed that the replacement of pavement materials reduces the radiant temperature of the surface. Considering the anthropogenic nature of its soil layers, a GPL can be considered as an urban soil or Technosol [16]. Pervious GPL systems included porous layers that retain water. Evaporation of stored water contributes to a cooling down perception for pedestrians and a sensible reduction of air ambient temperature [17]. In addition, GPLs could reduce surface temperature if vegetation is included [18].
Several studies show the importance of vegetation and biobased materials (e.g., wood chips) on the GPL behavior [19]. Wood chips may be locally produced and originate from sustainably managed forest. In addition, Buchanan et al. [20] argued that wood chips can be a solution adapted to the urban context because of their effectiveness in controlling soil erosion on a steeply sloping construction site.
Wang et al. [21] presented two types of driving factors for the evaporative cooling performance of pervious materials, namely the climatic parameters [22] and the hygrothermal parameters (albedo, water absorption, and water retention properties) [23]. Solar radiation has been reported to be the most significant climatic parameter, followed by air temperature, relative humidity, and wind speed [22].
Hygrothermal properties of pervious pavement are usually assessed under controlled conditions [24]. However, performance observed during laboratory experimental tests must be consolidated with summertime case studies of pervious pavement implemented at full scale. During dry and warm periods, water availability within pervious pavements may shrink dramatically. In these conditions, evaporation may be strongly reduced, and the cooling benefits of GPLs may be weakened. In the case of pervious concrete, Nemirovsky et al. [25] suggest that water stored far from the surface does not participate in the evaporation process.
Previous studies have shown that, without precipitation, pervious pavements may increase the urban overheating due to their high specific heat capacity and reduced evaporation [26]. Therefore, thermal performance of full-scale GPLs needs to be analyzed to investigate the extent to which pervious pavements can be considered as heat sinks during warm and dry periods.

2. Impact of Depth on Temperature Dynamics 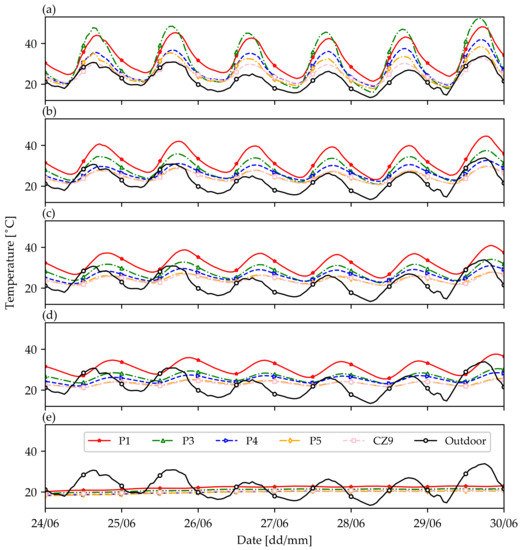 Figure 1. Temperature records at different depths: −3 cm (a); −8 cm (b); −16 cm (c); −24 cm (d); −55 cm (e) during the summer period from 24 June to 30 June 2019. P1 is represented with a red solid line with star markers. P3 is represented with a green dotted line with triangle up markers. P4 is represented with a blue dotted line with triangle right markers. P5 is represented with an orange dotted line with diamond markers. CZ9 is represented with a pink dashed line with square markers. The black continuous line with round markers represents air ambient temperature.
For the depth of −3 cm (Figure 1a), P3 was the warmest area during daytime and reached a maximum temperature of 51.0 °C. This confirms the existence of an energy storage effect, which induces an increase in the temperature. P3 also exhibited the highest daily temperature amplitude.
At a depth of −3 cm, P1 was the second warmest area during daytime and the warmest area during nighttime. For this depth, P1 was the warmest parking lot on average during the week (33.1 °C).
The temperature fluctuations of P4 (vegetation and substrate) recorded at a depth of −3 cm demonstrated a similar pattern to that of P5 (wood chips) on the first day. A difference in temperature between P4 and P5 began to occur on the third day (3–4 °C at noon). This small temperature gap may be explained by the hydrophilic properties of wood chips (considered to be an organic mulching) because wood may capture part of the morning dew.
CZ9 with grass and natural soil was the coolest area during most parts of the day. The lowest surface temperatures were recorded for CZ9 (29.6 to 32.9 °C at noon).
The depths of −8, −16, and −24 cm demonstrated similar patterns (Figure 1b–d). P1 was the warmest area at all times (day and night). P3 and P4 were cooler than P1, and P5 and CZ9 were the coolest areas. P3 tended to be warmer than P4 during daytime, but the two lots exhibited similar minimum temperatures. P5 and CZ9 showed almost identical thermal behavior. Each PLT presented a repeatable daily temperature pattern.
Measurements at a depth of 55 cm indicated similar patterns and described a plateau (between 18.2 and 22.7 °C). The amplitudes of the variations and the temporal shift, which were particularly visible on the temperature peaks, were negligible (Figure 10e).

3. Analysis of the Daily Temperature Cycle 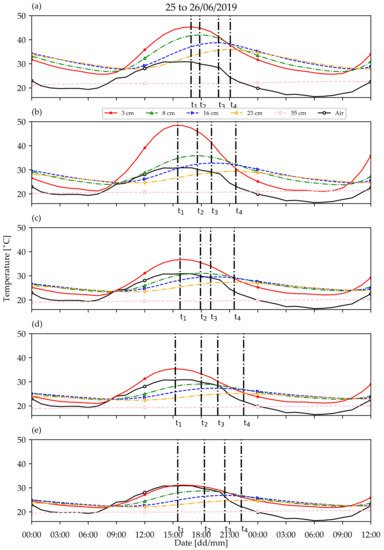 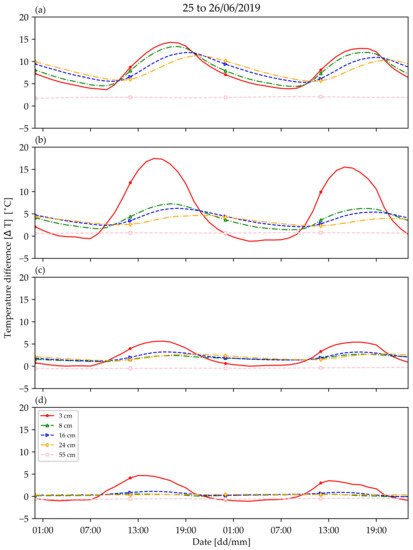 The cooling and heating rates were calculated for the −3 cm depth on 25 June and 26 June 2019 (cf. Equations (2) and (3)) (Figure 4). Two hours before and after sunrise, all RC rates tended to be similar (between 0.0 and 1.0 °C h−1). Heating started 1–2 h after sunrise (positive value of temperature rate, i.e., heating rate). The heating rates increased and reached their daily maximum around noon. The −3 cm depth layers started to cool around 5 pm (negative value of temperature rate, i.e., cooling rate). The daily minimum in the cooling rate was reached around sunset. 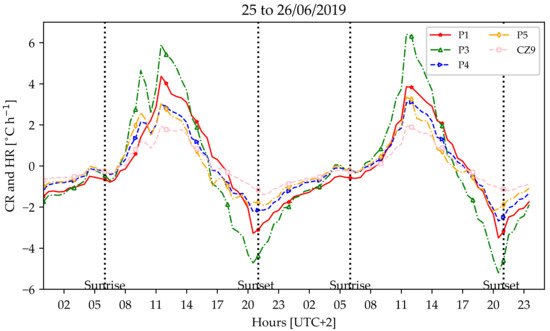