Mitochondrial Dysfunction in the Liver

The liver plays a key role in systemic metabolic processes, which include detoxification, synthesis, storage, and export of carbohydrates, lipids, and proteins. The raising trends of obesity and metabolic disorders worldwide is often associated with the nonalcoholic fatty liver disease (NAFLD), which has become the most frequent type of chronic liver disorder with risk of progression to cirrhosis and hepatocellular carcinoma. Liver mitochondria play a key role in degrading the pathways of carbohydrates, proteins, lipids, and xenobiotics, and to provide energy for the body cells. The morphological and functional integrity of mitochondria guarantee the proper functioning of β-oxidation of free fatty acids and of the tricarboxylic acid cycle.

The liver plays a key role in lipid homeostasis, with steps including the synthesis, oxidation, and transport of free fatty acids (FFA), triglycerides (TG), cholesterol, and bile acids (BA). Chronic liver diseases encompass a spectrum of conditions ranging from metabolic to viral, alcohol-related diseases, drug-related diseases, autoimmune diseases, and tumours. The hepatocyte can be damaged by various hits and intracellular organelles can be part of the dysfunctional cell, with changes including microsomal hypertrophy, mitochondrial damage by free fatty acids overload and insufficient β-oxidation and activation of peroxisomal metabolism.
Growing evidence points to dysfunctional mitochondria as key contributors in the pathogenesis of the chronic metabolic conditions (i.e., obesity, metabolic syndrome and type 2 diabetes mellitus) frequently linked to liver disease. These processes act through pathways leading to oxidative stress, chronic inflammation, and insulin resistance. Thus, diagnostic techniques able to early detect and monitor mitochondrial dysfunction have great relevance in terms of possible primary/secondary prevention measures and of therapies specifically targeting liver mitochondria [1,2,3].

2. Mitochondrial Dysfunction in the Liver

Mitochondrial dysfunction is one of the most distinctive characteristics of NAFLD [1]. In NAFLD patients, increased plasma levels of FFA are firstly associated with increased intrahepatic inflow [2] and early mitochondrial biogenesis through peroxisome proliferator-activated receptor-α (PGC1-α) activation. This step, in turn, leads to increased FFA oxidation rates and increased or unchanged mitochondrial function [3]. Coupling of FFA oxidation to ATP generation might be dysfunctional already, because of emerging ultrastructural changes and increased expression of uncoupling proteins. With progression of NAFLD, however, mitochondrial ATP generation is further impaired resulting in defective cellular energy charge [4][5][6][7]. The precise pathways governing such changes of mitochondrial performance are still unknown.
The increased accumulation of FA in the hepatocytes (neutral lipid droplets) during insulin-resistance-associated NAFLD, which is pathologically defined as hepatic steatosis, lead to a series of mitochondrial alterations ranging between mitochondrial DNA (mtDNA) damage to sirtuin alteration. The mtDNA, a circular double-stranded molecule located in the mitochondrial matrix, encodes about the 10% of mitochondrial proteins, the others being encoded by the nuclear DNA. mtDNA encodes proteins necessary for the assembly and activity of mitochondrial respiratory complexes [8]. Ongoing oxidative stress during steatosis can severely impair mtDNA function [9] with further amplification of oxidative stress, mitochondrial biogenesis, and ultimately NAFLD severity and inflammation [10][11][12][13].
Alteration of the mitochondrial function compromises also the prooxidant/antioxidant balance, with an increase in non-metabolized fatty acids (FA) in the cytosol as a consequence of the blockade of FFA β-oxidation and the resulting stimulation of ROS production [14][15]. Mitochondrial dysfunctions are often accompanied by considerable ultrastructural changes such as megamitochondria, loss of cristae, and formation of paracrystalline inclusion bodies in the organelle matrix [16].
In addition, in NAFLD, the excessive accumulation of lipotoxic lipids in the hepatocyte generates a dysfunctional electron transfer chain with generation of abnormal levels of ROS via involvement of glycerol 3-phosphate dehydrogenase (GPDH), α-ketoglutarate dehydrogenase (AKGDH), and pyruvate dehydrogenase (PDH). Besides, the excessive accumulation of FFA into mitochondria, subsequent to an increased uptake or an insulin-resistance situation, may elicit an increase of the inner mitochondrial membrane permeability. Mitochondrial cytochrome P450 2E1 (CYP2E1), a potential direct source of ROS, has been shown to have an increased activity in a rodent model of NASH as well as in NASH patients [17][18]. CYP2E1, a cytochrome responsible for long-chain fatty acid metabolism, produces oxidative radicals and could also act as a part of the “second hit” of the pathophysiological mechanism of NAFLD [19]. In addition to the pro-oxidant mechanism, a decreased activity of several detoxifying enzymes was seen using an experimental model of NASH. Glutathione peroxidase (GPx) activity is reduced likely due to GSH depletion and impaired transport of cytosolic GSH into the mitochondrial matrix [20]. The initial mitochondrial dysfunction can be further exacerbated by the production of mtDNA mutation by ROS and highly reactive aldehydes, such as malondialdehyde (MDA) and 4-hydroxy-2-nonenal (4-HNE), through lipid peroxidation following the interaction between ROS and PUFA. Cytochrome C oxidase may be directly blocked by MDA while 4-HNE may contribute to “electron leakage” uncoupling complex 2 of the ECT whose oxidative capacity may be also diminished by derivative damage by interaction between mitochondrial membranes and both MDA and 4-HNE [21].
Aquaporin-8 (AQP8), a pleiotropic aquaporin channel [22][23][24] allowing movement of hydrogen peroxide in addition to water and ammonia, localized at multiple subcellular levels in hepatocytes [25], is also present in mitochondria, where it has been suggested to facilitate the release of hydrogen peroxide across the inner mitochondrial membrane following ROS production [26].
Mitochondrial redox imbalance and high Ca2+ uptake have been shown to induce the opening of the permeability transition pore (PTP) with consequent disruption of energy-linked mitochondrial functions and triggering of cell death in many disease states including non-alcoholic fatty liver disorders [27].
In previous studies, we used the rat model of a choline-deprived diet for 30 days inducing simple liver steatosis. In particular, peroxidation of the membrane lipid components participates in mechanisms of oxygen-free radical toxicity [28]. Cardiolipin is a phospholipid localized almost exclusively within the inner mitochondrial membrane close complexes I and III of the mitochondrial respiratory chain. Notably, cardiolipin becomes an early target of oxygen-free radical attack, a step leading to deranged mitochondrial bioenergetics. In a first study, we assessed various parameters related to mitochondrial function such as complex I activity, oxygen consumption, reactive oxygen species (ROS) generation and cardiolipin content and oxidation. Complex I decreased by 35% in mitochondria isolated from steatotic livers, compared with the controls, and changes were associated with parallel changes in state 3 respiration. At the same time, hydrogen peroxide (H2O2) generation increased significantly in mitochondria. The mitochondrial content of cardiolipin, a phospholipid required for optimal activity of complex I, decreased by 38% in parallel with an increase in the level of peroxidised cardiolipin. Data confirm that dietary steatosis induces mitochondrial dysfunction revealed by deranged complex I function attributed to ROS-induced cardiolipin oxidation and function [29]. A putative scenario of damage is depicted in Figure 1. 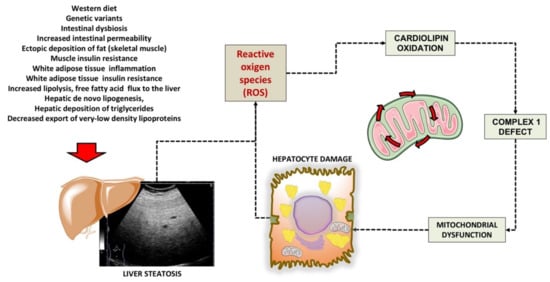