Anti-Gal are the most abundant xenoreactive natural antibodies. They are supposed to stem from immunization against the gut microbiota and have been implicated in the pathogenesis of several diseases, including multiple sclerosis.

Alzheimer’s disease (AD), the most common form of dementia, is a progressive, irreversible and incurable neurodegenerative disease, which constitutes one of the major causes of dependency, disability and mortality [1]. There are over 50 million people worldwide living with dementia in 2020. This number will almost double every 20 years, reaching 82 million in 2030 and 152 million in 2050. AD accounts for 50–75% of dementia cases [2].
Neurodegeneration is most likely caused by an abnormal accumulation of beta-amyloid peptides which produces a cascade of events, including an inflammatory process mainly mediated by microglial activation and formation of neurofibrillary tangles, which culminate in neuronal death. The triggering mechanism of this cascade is still unknown and therefore biomarkers with possible mechanistic insights into the AD pathophysiologic processes are urgently needed [3]. Recent works suggest a potential association between gut microbiota, neuroinflammation and AD, either directly owing to bacterial invasion of the brain due to leakage of the blood-brain barrier (BBB) and production of toxins and inflammation, or indirectly by modulation of the immune response [4].
The α-Gal epitope (Galα1-3Galβ1-4GlcNAc-R) is a short carbohydrate sequence terminally located in the oligosaccharide units of glycoproteins and glycolipids, commonly expressed at the cell surface of various microorganisms (protozoa, bacteria, fungi, viruses), marsupials and non-primate mammalians. This epitope is synthesized by the action of the α1,3-galactosyltransferase (α1,3GT) enzyme [5][6][7][8][9]. In humans, the expression of the GGTA1 gene, which encodes α1,3GT, is suppressed and the consequent absence of α-Gal on the surface of cells permits a massive production of anti-Gal antibodies [10]. Anti-Gal IgG, IgM and IgA, in fact, represent over 1% of all circulating immunoglobulins [11]. Their synthesis is thought to be mainly stimulated by chronic exposure to enteric bacteria, various pathogens and environmental antigens presenting the α-Gal epitope on the surface. Such induced immune response represents an evolutionary advantage for the human organism that acquires immune protection against these pathogens [12]. Furthermore, anti-Gal antibodies fulfil other important roles, besides ensuring immunity from infections originating from several micro-organisms. These include contributing to rejection in cases of xenogeneic cell, tissue and organ transplantation, as well as accelerating the process of wound healing. However, circulating anti-Gal antibodies have been also implicated in the pathogenesis of various autoimmune diseases, such as Henoch–Schönlein purpura, IgA nephropathy, rheumatoid arthritis, Crohn’s disease and Graves’ disease [8][9][10][13][14]. Variations in the levels of anti-Gal have also been described in multiple sclerosis (MS), in association with an altered microbiome, suggesting a link between anti-Gal antibodies and the disease [15][16]. 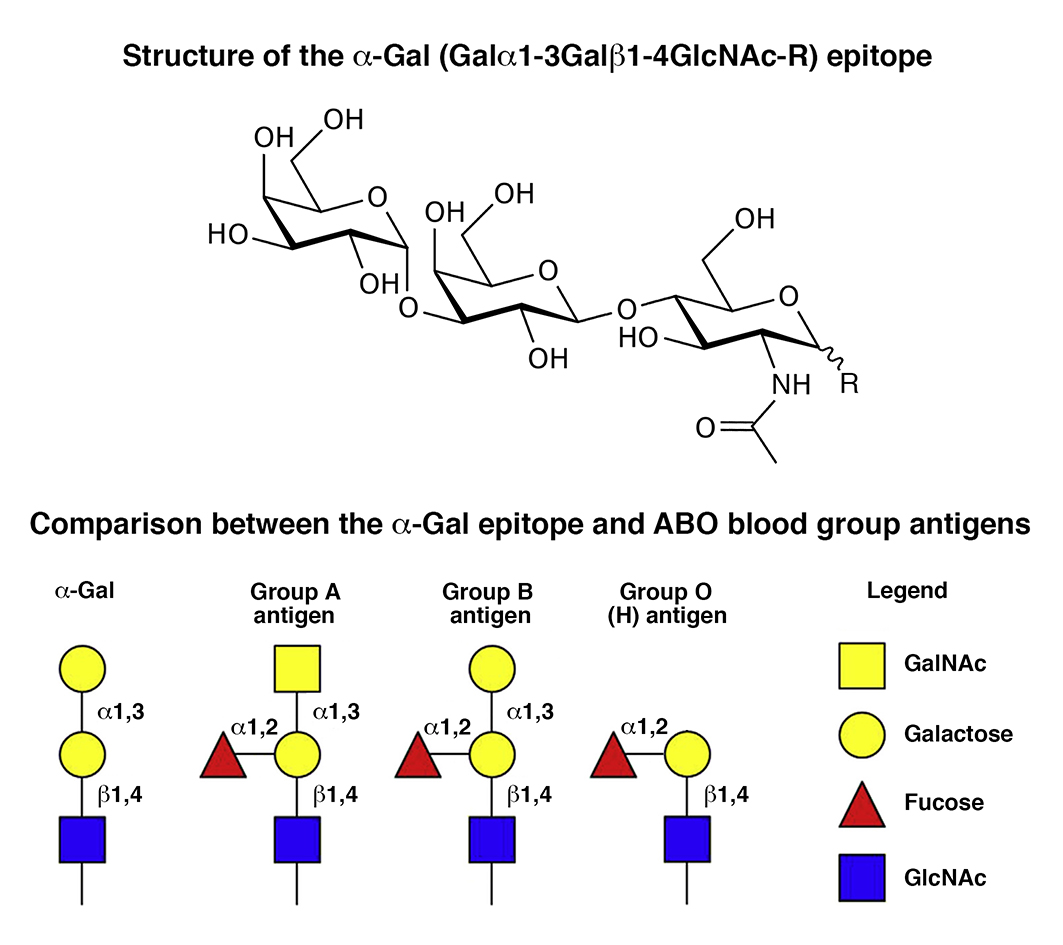 In physiological conditions, anti-Gal antibodies cannot cross the BBB, so they are not present in the cerebrospinal fluid (CSF) of healthy individuals. However, varying titers of anti-Gal Ig were found in the CSF of patients with MS, Guillain-Barré syndrome and meningitis, suggesting that inflammatory processes might alter the BBB and favour the passage of blood Ig (including anti-Gal antibodies) into the CSF [18]. Furthermore, α-Gal-like epitopes have been detected in the brain, namely in the gray matter of healthy individuals who died accidentally [19], as well as in amyloid deposits, neurofibrillary tangles and corpora amylacea of patients with dementia, including AD [20]. Together with recent literature findings demonstrating the α-Gal epitope presence in several bacteria [21] that constitute the brain microbiome [22], these observations suggest a potential relationship between anti-Gal antibodies and AD etiopathogenesis.

We recruited 30 participants, who scored < 24 on the Mini-Mental State Examination and > 0.5 on the Clinical Dementia Rating. To rule out other potential causes of cognitive impairment, all patients underwent blood testing (including full blood count, erythrocyte sedimentation rate, urea nitrogen and electrolytes, thyroid function, vitamin B12, and folate) and brain imaging. Thirty sex/age-matched cognitively healthy subjects (HS) were recruited as the control group. Since anti-Gal antibody levels can be altered in the context of different pathologies and treatments, subjects with pathologies, such as rheumatoid arthritis, interstitial cystitis, eosinophilic esophagitis [23], Henoch–Schönlein purpura, IgA nephropathy, Crohn’s disease and ulcerative colitis [24], or treated with anticancer drugs, such as Cetuximab (or Erbitux) [25], animal-derived tissue patches, cartilaginous grafts or bioprostheses, such as biological heart valves [26], were excluded.
Anti-Gal IgG and IgM serum levels were significantly decreased, and IgA serum levels significantly increased in AD patients compared to HS. No significant relationship was found between Ig levels and age, sex, blood group, severity of disease as assessed by MMSE, level of education, co-morbidity and drugs in AD patients, except for a weak positive correlation between IgA and BMI. To our knowledge, this is the first study that has investigated the serum levels of anti-Gal antibodies in AD and, therefore, studies for comparison are lacking. However, circulating anti-Gal IgG levels were reduced compared with those of age/gender-matched HS in patients with MS [15], an autoimmune, inflammatory and neurodegenerative disease [27]. The authors of the latter study speculated that a modified gut microbiota, specifically characterized by low α-Gal-producing microorganisms, might modify the inflammatory homeostasis in genetically predisposed individuals, thereby increasing the risk of developing MS [15]. The finding that the gut microbiota of MS patients was characterized by a significant decrease in microorganisms expressing the GGTA1 gene (which encodes the enzyme responsible for the synthesis of the α-Gal epitope) supports this hypothesis [16]. In patients with inflammatory bowel diseases, such as Crohn’s disease and ulcerative colitis, anti-Gal specific IgA antibodies reached higher concentrations than in HS, while total IgM were significantly decreased [28]. The authors of the latter study speculated that the increase in IgA levels was linked to the presence of a damaged intestinal barrier exposing the host’s immune system to enteric bacteria presenting α-Gal. The reduction of total IgM was interpreted as a reflection of isotype switching [28].
Even though anti-Gal antibodies do not satisfy fully the definition of natural antibodies (i.e., antibodies present in a non-immunised organism from birth), some authors place them in this category, due to some features that they have in common, especially the fact that their synthesis is thought to be mainly stimulated by chronic exposure to enteric bacteria and ubiquitous pathogenic microorganisms and environmental antigens presenting the α-Gal epitope. [8][9][10][14]. IgM and IgG are the most widely recognized classes of natural antibodies, which are implicated not only in the responses to infectious microorganisms, but also in the homeostatic control of various neurological and cardiovascular disorders, diabetes and cancer. Interestingly, lower levels of natural antibodies were generally negatively correlated with disease onset and progression, whereas high levels often correlated with protection or absence of disease [9][14]. An example is represented by the IgG antibodies against amyloid peptides, which were reported to be reduced in AD patients compared to age-matched HS [29] and to decrease with normal ageing and advancing AD, especially those binding to assemblies of amyloidogenic peptides [30]. The literature available on IgA is scant, at variance with IgM and IgG natural antibodies. IgAs function as potent pro-inflammatory agents, being rapid activators of neutrophils, and are crucial in the first line of defence against pathogens. In particular, they are considered homeostatic immunoglobulins that neutralize microbiota and food antigens to prevent interactions with the host [9][31].
We speculated that the simultaneous decreases in anti-Gal IgM and IgG levels and the increase in anti-Gal IgA level that we observed in AD patients might reflect the isotype switching of anti-α-Gal B cells from the production of “natural” IgM antibodies to an IgA-mediated adaptive response. There have been other reports of significant increases in serum IgA levels in AD patients in comparison with HS [32][33][34]. An example is the IgA antibodies directed against the N-Methyl-D-Aspartate Receptor (NMDAR), detected in 10% of AD patients as opposed to 2.8% of HS [35]. The NMDAR NR1 subunit was found to carry glycostructures recognized by antibodies raised against the Fucα1-2Gal epitope [36], a common constituent of A, B and O blood groups. Noticeably, most anti-B antibodies in the sera of A and O blood group carriers are cross-reactive anti-α-Gal antibodies recognizing both α-Gal and B [Galα1-3(Fucα1-2)Gal] epitopes [37]. It is also of note that IgM and IgA-enriched Ig preparations incited the production of higher levels of TNF-α and NO by primary rat microglial cells in vitro, compared with IgG [38], which highlights the possible role of IgA-mediated responses in the microglial activation and neuroinflammation associated with AD. We hypothesized that the phlogosis of lymphoid tissue associated with excess abdominal fat, either in association with gut microbial dysbiosis or not, might alter the normal balance between tolerance and reaction to ubiquitary antigens in the gut-associated lymphoid tissue (GALT), thus favouring the sensitization of α-Gal-specific T helper 2 cells. The positive correlation that we observed between IgA and BMI and the encouraging results of therapeutic approaches aimed at controlling metabolic imbalance and inflammation for halting the progression of AD [39] are noteworthy in this regard. B cells activated in the GALT might home into the marginal zone of the spleen [40], wherefrom IgA produced by GALT plasma cells in response to commensal or pathogenic bacteria might enter the blood and permeate the BBB, in the presence of phlogosis. The mounting of such an adaptive response to microbial α-Gal epitopes in the GALT and the concomitant permeabilization of the BBB to anti-Gal IgA antibodies may damage cells and tissues in the central nervous system as a result of antibody- and complement-mediated responses to formerly tolerated α-Gal epitopes also expressed by the brain microbiome [21][22]. Such responses could end up involving self-antigens containing identical or similar oligosaccharide moieties linked to autologous peptides, on the base of epitopic mimicry or epitope spreading.

Anti-Gal antibodies are the most abundant xenoreactive natural antibodies. These antibodies target the alpha-Gal epitope, terminally located in the oligosaccharide units of glycoproteins or glycolipids of all mammals except apes, Old World monkeys and humans. The alpha-Gal epitope is constitutively expressed in several bacteria constituting the brain microbiota, and alpha-Gal-like epitopes have been detected in the gray matter, amyloid deposits, neurofibrillary tangles and corpora amylacea in the human brain, suggesting a potential link between anti-Gal and Alzheimer’s disease etiopathogenesis.

We observed lower IgG and IgM and higher IgA levels in AD patients compared to healthy subjects. These results suggest a possible role of anti-Gal antibodies in the pathogenesis of AD and support the hypothesis of a causal association between host microbiota, systemic phlogosis incited by the lymphoid tissue associated with abdominal fat, neuroinflammation and dementia. If confirmed in a longitudinal study with a larger number of participants, these findings could open new scenarios in the knowledge of AD etiopathogenesis and the search for new biomarkers and therapeutic strategies for AD.