Home-based records are paper or electronic records retained and used by mothers or caregivers to document the health services received for maternal, newborn, and child health. Little has been studied about the roles of these records on newborn and child health outcomes.

Home-based records have been used in over 163 countries worldwide to improve maternal, newborn, and child health (MNCH) [1]. The records varied greatly in design and content across countries and regions. Home-based records are paper or electronic health records retained and used by mothers or caregivers in the household to document the health services received for MNCH [1]. They ranged from maternity case notes or vaccination-only cards to child health books or integrated maternal and child health handbooks. The record is intended to be integrated into the routine health information system and complement records maintained by health facilities [1].
Traditionally, MNCH programs have developed their own program-specific, home-based records. In many countries, the maternal health card continues to be a stand-alone record independent from child records [2]. The difference in target groups has prompted policy debates on whether home-based records should be developed and distributed separately for the mother and child [2]. The lack of integration and having no standardized format and design of home-based records might impact health reporting, health outcomes, scaling up, and evaluation between health systems worldwide [3].
The first integrated home-based record was made in Japan in 1948. The Ministry of Health, Labor and Welfare of Japan introduced the Maternal and Child Health (MCH) handbook to improve the health of both mothers and children [4]. The initial MCH handbook covered the entire spectrum of pregnancy, childbirth, postpartum, and newborn care, through childhood until six years old. In 1991, municipalities and towns/villages in Japan started distributing the MCH handbook following decentralization [4]. Local governments could add more information from the national version (consisted of 48 pages) based on their local needs [4]. Due to Japan’s success in reducing its infant mortality rate, the MCH handbook was adapted worldwide. To date, more than 50 countries used the integrated MCH handbook [4] and is particularly useful when access to health services is restricted [5].
The full integration has several advantages. It includes greater assurance of a continuum of MCH care [6][7][8][9] and sizable cost savings in the record’s operation (e.g., production and distribution) [10]. Healthcare providers can enter medical records into the handbooks and share their knowledge and information on maternal health and child growth [4]. Furthermore, parents can obtain appropriate information easily and rely on the continuous guidance of the handbook from pregnancy to childhood [4]. The MCH handbook can be a valuable tool for promoting a life-course approach to healthcare. Such an approach might help achieve Sustainable Development Goal (SDG) 3—to “ensure healthy lives and promote well-being for all at all ages” [11].
Despite substantial progress over the past two decades, in 2019 alone, the World Health Organization (WHO) reported that approximately 7.4 million children, adolescents, and youth mainly died from preventable or treatable causes [12]. Of these deaths, children under five account for 5.2 million, and the leading causes of their death include preterm birth complications, pneumonia, neonatal sepsis, diarrhea, and malaria [13]. These deaths can be prevented or treated with access to affordable and straightforward interventions, such as immunization, adequate nutrition, safe water, and quality care by a trained healthcare provider [13]. While proven and cost-effective interventions are available to reduce deaths for children under five [14][15][16][17][18], review studies that explored the roles of home-based records in promoting healthcare service delivery among this population are limited.
One study systematically reviewed the effectiveness of home-based records on MNCH [3], which was used as a basis for the WHO’s recommendations concerning home-based records. However, this review article did not comprehensively examine the roles of home-based records on newborn and child health. As defined in the WHO guideline [1], newborn and child health outcomes include newborn/child morbidity and mortality, care seeking, care practices, and health services utilization. Magwood et al. [3] included only two studies for newborn health and seven studies for child health outcomes. They reported no significant effects on newborn health outcomes (e.g., neonatal death or stillbirths, immediate breastfeeding). For child health outcomes, they reported that home-based records might positively impact immunization rates, growth, and development. However, they covered only original research articles with randomized controlled study designs and that were written in English. They might have missed valuable information derived from observational studies. Observational studies may provide more evidence on the roles of home-based records on newborn and child health. They provide information on actual adherence to home-based records, bringing evidence on real-life outcomes of records. In addition, since Japan is a proponent of the MCH handbook, it would be worthy of including Japanese articles in the analysis. By doing so, we could capture more evidence on the roles of home-based records on newborn and child health.

Of the 55 studies included in this review, there were 10 RCTs, four cohort studies, seven quasi-experimental (open, nonrandomized trial), 27 cross-sectional, five mixed-methods (pre-and post-intervention with qualitative component), and two qualitative studies. We used the World Bank income level classification to categorize the countries where the study was conducted [19]. Thirty-four studies were conducted in high-income countries (HIC): United Kingdom (n = 3), United States (n = 5), Australia (n = 3), Norway (n = 1), and Japan (n = 22). Twenty-one studies were conducted in low- and middle-income countries (LMIC): Indonesia (n = 3), Kenya (n = 3), Mongolia (n = 2), Pakistan (n = 2), and one study in Vietnam, South Africa, Brazil, Bangladesh, Palestine, Burundi, Uganda, Dominican Republic, Cambodia, Bosnia and Herzegovina, and one multi-country study.
We noted differences in the inclusion criteria of the study populations. Mothers’ enrollment period varied across the studies, from any time during pregnancy, childbirth, and the postpartum period. One study was conducted in 13 centers in eight countries and targeted both literate and illiterate mothers living in different geographical and cultural conditions and communities with low or easy access to health services [20]. In this review, most studies were conducted in health facilities, and a few were conducted in community settings.
We also noted differences in the type of interventions. Of 55 studies, 34 focused on the MCH handbook, and the remaining 21 focused on other home-based records, such as maternity case notes, road to health (RTH) booklet, personal child health record, among others. Some studies did not have a comparison group, while others were compared to standard care or non-users of home-based records. Hence, the results were reported considering home-based records as a single intervention. Overall, the studies were heterogeneous, and the sample sizes mainly varied (range: 5–5,940,204).

3. Risk of Bias in Included Studies

We noted differences in the risk of bias across the studies. Figure 2 shows the risk of bias assessment for the 10 RCTs included in this review [21]. Following the RoB 2 algorithm, all selected studies had a high overall risk of bias, mainly owing to bias from the randomization process, blinding/masking not described or not possible for the said intervention, and selective outcome reporting. We found some methodological considerations and critical potential confounding variables neither measured nor adjusted statistically. 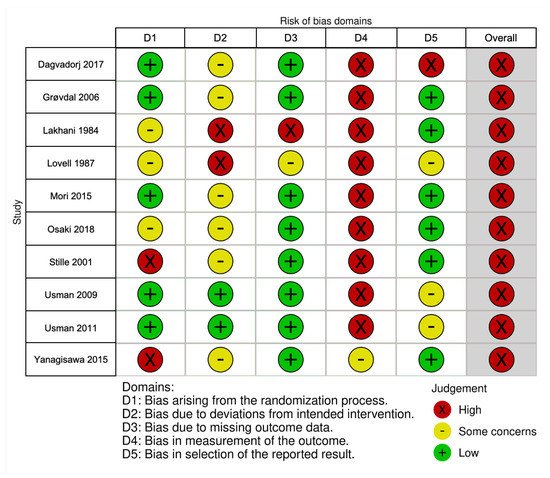 Figure 2. Risk of bias summary for randomized controlled trials based on authors’ judgments (low, some concerns, high) about each risk of bias item for each included study.