COVID-19 is pneumonia caused by a novel coronavirus which is an emerging infectious disease, and outbreaks in more than 200 countries around the world. Consequently, the spread principles and prevention and control measures of COVID-19 have become a global problem to be solved. Here, we pose a series of dynamical models to reveal the transmission mechanisms of COVID-19. Based on these mathematical models, data fitting and spread trend of COVID-19 are explored to show the propagation law between human populations. We hope that our work may provide some useful insights for effective control of the COVID-19.

COVID-19 is an emerging infectious disease caused by a novel coronavirus (SARS-CoV-2). Because its strong infectivity and little attention by people, it spread over 200 countries and infected more than 300 million people [1]. A lot of great works have been done on COVID-19 including epidemiological review, pathological characteristics, diagnostic technology, treatment and so on [2][3][4][5]. Here, we want to show the transmission dynamics of COVID-19 from the aspect of mathematical modelling. A series of dynamical models of COVID-19 transmission are constructed based on reasonable assumptions. After that, parameters estimations are carried out by data fitting. Besides that, the trend of disease spread is predicted and the effectiveness of control measures are evaluated.

We firstly present dynamical models in the form of ordinary differential equations for the transmission of COVID-19 in Wuhan, China.  We divide the total population as five groups: Susceptible (S), Exposed (E), Infected (I), Confirmed (Q) and Removed (R). Based on the real situation of Wuhan, two dynamical models are constructed to describe the transmission processes of the epidemic before and after the lockdown of the city. Dynamical model before January 23, 2020 has the following form (see Figure 1) [6]:

When Wuhan government adopted the measure of lockdown, the people can hardly leave or return Wuhan. In this case, dynamical model with lockdown after January 23, 2020 is as follows: 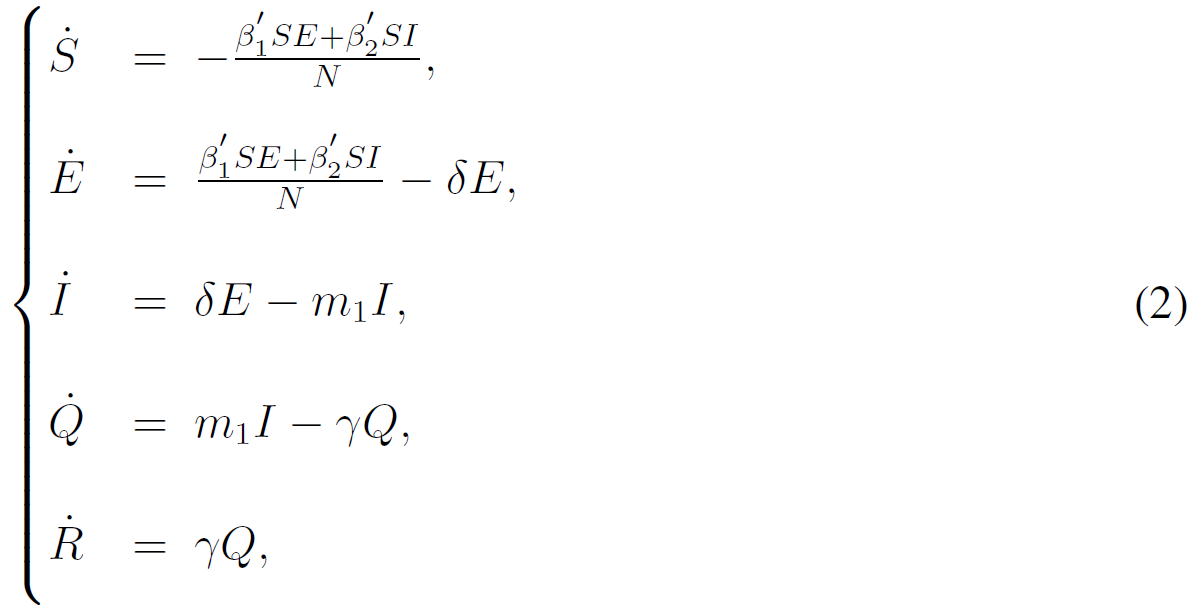 are infection coefficients under lockdown and

is the confirmation rate depends on the richness of medical resources.

On 23 January 2020, the Chinese authorities introduced the implementation of the lock-down strategy in Wuhan to shut down the movement and to control the transmission of COVID-19. And since Feb 04, Huoshenshan Hospital, Leishenshan Hospital and many cabin hospitals have been used, the medical resources become more reliable. Hence, the COVID-19 epidemic in Wuhan can be divided into three stages. The first stage is from 15 January to 23 January, there does not exist the travel restriction and the medical diagnostic tools may be less accurate and reliable. The second stage is from 23 January to 04 February, when the medical resources are not reliable and travel restriction is used. The third stage is from 04 February to 30 March, there exists the strict community control strategy and the medical resources become more reliable. The strict community control strategy means that the community is closed, which is reflected in decreasing of transmission rate. And the reliable medical resources reflect the increasing of laboratory diagnosis rate m.

Figure 2 unveils the time evolution of both infection cases and comparison with empirical record of cumulative and daily number of confirmed COVID-19 cases in Wuhan city with three stages, and which also shows the 95\% percent interval for all 10000 passing simulation trajectories and the median of these 10000 simulation outputs. It is clear that the theoretical prediction is nearly full agreement with real data, which also well validates the accuracy of proposed model. Based on these parameters set, one can predict the peak time, final scale and other features of COVID-19 in Wuhan.

We developed a SEIQR difference-equation model to describe the transmission of COVID-19 in Shanxi Province, China [7]. Human population birth and death rates were ignored, and the human host incubation period was

days. A(t) is the imported COVID-19 cases at discrete time t, which is considered as the exposed compartment by input. Infectious cases at the rate m reverted to confirmed cases and the recover rate was

. Hence, the following difference equations were considered to describe the COVID-19 transmission model:

. Figure 3(A) shows the time evolution of both infection cases and comparison with the confirmed of COVID-19 cases in Shanxi Province, which also shows the 99%, 95%, 90% and 50% percent interval for all 100000 passing simulation trajectories and the median of these 100000 simulation outputs. It is clear that the theoretical prediction is nearly full agreement with real data, which also well validates the accuracy of proposed model. Figure 3(B) shows the simulation results for cumulative number of confirmed COVID-19 cases in Shanxi Province with different lock-down strategy dates in Wuhan city. The dates of Wuhan city lock-down were crucial in producing the outbreak pattern in Shanxi Province. If the city lock-down date ahead two days, the final scale of cases will decrease one half (205, 95% CI: 187-223). And if the city lock-down date delay for two days, the mean final scale of cases will increase one half (95% CI: 520-620). It is obtained that the earlier with city lock-down, the fewer cases, and the later with city lock-down, the more cases. Hence, the travel restrictions could be instrumental to national and international agencies for public health response planning, and the earlier the better for other provinces except Hubei in mainland China.

By observing actual COVID-19 case data, it is more appropriate that the random variable of the residence time of an individual in a compartment obeys the normal, or log-normal or gamma distributions. Therefore, an integration model is established  to describe the spread of SARS-CoV-2 between infection generations.

, who are confirmed at time t with probability

. The daily number of close contacts per first-generation non-confirmed case is

is the probability of post-exposure infection. At time $\tau$, the import number of the second-generation non-confirmed cases is

. For family member and non-family member who are infected at time $\tau$, their confirmed probability at time t are

. The import number of the third-generation non-confirmed cases at time $\tau$ is

, who are confirmed at time t with probability

,  respectively. Dynamical model as the form of integral equation is as follows[9]:

are accumulation normal distribution functions of the individual residence time

For Shanxi province, there only appear two generations cases. By applying

to fit the total cumulative confirmed cases, the fitting result can be seen in Figure 4. 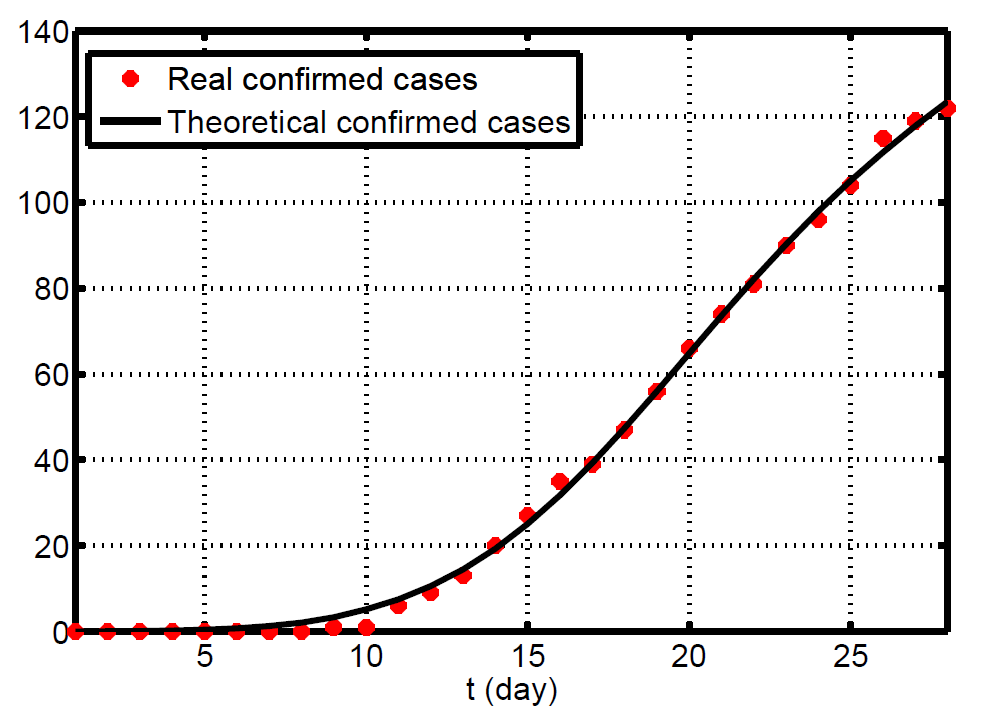 Figure 4. The fitting result of the total cumulative confirmed cases. Here, the red dots are actual reported cases from January 14 to February 10. Dynamical model is used as system (3).

The long-term prospect of the epidemic in Shanxi province can be seen in Figure 5. The inflection point (peak time) of COVID-19 has occurred in February 2. The disease will disappear in late February or the beginning of March and the mean final scale of cases will reach 175. It is inferred that there are about 20 non-confirmed family cases and about non-confirmed non-family cases that have not yet been found and confirmed, respectively. All these findings are consistent with the actual situation of Shanxi province.

Figure 5. The prediction result of the total confirmed cases in current situation. (a) New cases. (b) Cumulative cases.

In this work, dynamical models including ordinary differential equation, difference equation and integral equation for COVID-19 transmission in China are established  and interesting results are obtained. Compared the similarities and differences with China, other countries may acquire useful information for COVID-19 from the perspective of transmission and macro control. We are deeply aware of that these works are not enough for showing the whole picture of modeling for COVID-19. This work hopes to serve as a trigger or offer a good starting point for revealing the internal mechanism of COVID-19 transmission between humans.