Microsurgical free flap reconstruction in acute burn care offers the option of reconstructing even challenging defects in a single stage procedure. Due to altered rheological and hemodynamic conditions in severely burned patients, it bears the risk of a higher complication rate compared to microsurgical reconstruction in other patients. To avoid failure, appropriate indications for free flap reconstruction should be reviewed thoroughly. Several aspects concerning timing of the procedure, individual flap choice, selection and preparation of the recipient vessels, and perioperative measures must be considered.

Severe burn injuries usually involve loss of skin and soft tissue and often require extensive wound reconstructions. While most burn wounds are sufficiently reconstructed by split-thickness skin grafts (STSG) [2], some burn wounds pose complex defects with deep tissue necrosis and exposed functional structures like bone, tendon, or nerves after complete eschar removal (cp. Figure 1). These deep burns commonly result from a longer exposure time in flame burns or from contact or scald burns due to the conduction of a higher amount of thermal energy. Electrical trauma and chemical burns are less frequent but can lead to even more devastating tissue defects, even affecting muscle compartments and damage to main vessels or nerves [3]. Because of their delicate soft tissue layers with functional structures directly underneath, hands and feet are often affected and may require free flap coverage in the acute setting, but other areas with thin skin coverage overlying bony prominences like elbow, knee or tibia are also at risk. 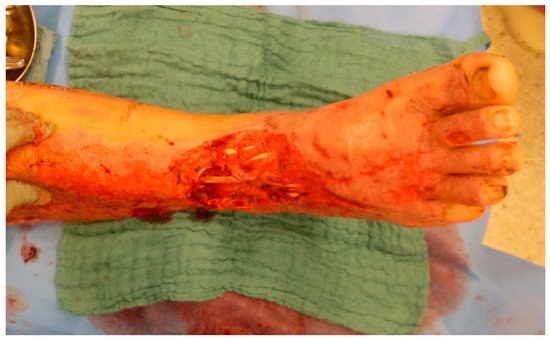 Figure 1. Full-thickness defect after failed STSG due to diminished perfusion of the wound bed in a patient suffering from high-voltage trauma.

In primary burn treatment, timing is an important factor to ensure success of the free flap procedure comparable to reconstruction of other traumatic defects [4]. Literature shows a reduced risk of flap failure when free flap reconstruction is performed early after trauma [5]. A certain hypercoagulability seems to arise 48 h after burn trauma [6], suggesting that a free flap procedure presents a lower risk if performed earlier after trauma. Hence, primary free flap reconstruction during the first days after trauma might be beneficial, at least in burn patients with only one affected extremity who are hemodynamically stable. Of note, these cases, more often associated with thermal crush injuries than with actual flame burns, are rare.
Extensive burn injuries, on the other hand, lead to characteristic burn shock due to vascular hyperpermeability and consecutive fluid shifting in the initial phase after trauma. In these cases, fluid resuscitation and sequential debridement with subsequent skin grafting should be completed to achieve a stable circulatory state prior to planning microsurgical tissue transfer. Definite defect closure can be postponed in these cases by conserving exposed bones or tendons using negative pressure wound therapy hydrogel dressings.

As in every free flap procedure, several aspects need to be considered to choose the appropriate free flap for effective defect coverage in acute and non-acute burn reconstruction. Apart from defect size, special reconstructive needs, such as a fascial layer to facilitate tendon movement or reconstruction of a blood vessel to improve local circulation, must be taken into account. In addition, many extensively burned patients offer limited donor sites providing fasciocutaneous free flaps with intact skin or an adequate pedicle length to reach undamaged recipient vessels. In patients with unburned thighs, the anterolateral thigh flap (ALT), first described by Song et al. in 1984 [7], offers a huge versatility when designed as a compound flap. While it is capable of closing even extensive defects when accepting skin grafting of its donor site, it can be raised with fascia if needed. In addition, it can be used as a flow-through flap to reconstruct damaged axial arteries of injured limbs [8]. In the absence of suitable cutaneous donor sites, free muscle flaps can be raised even in massively burned patients and in donor sites showing full-thickness burn wounds.
Severe and circumferential damage to skin of the extremities with fascial excision of the burn may lead to acute posttraumatic lymphedema due to local lymphatic vessel injury and interruption, and can be addressed with advanced microsurgical solutions such as compound flaps together with vascularized lymph node flaps (cp. Figure 2 and Figure 3) [9]. 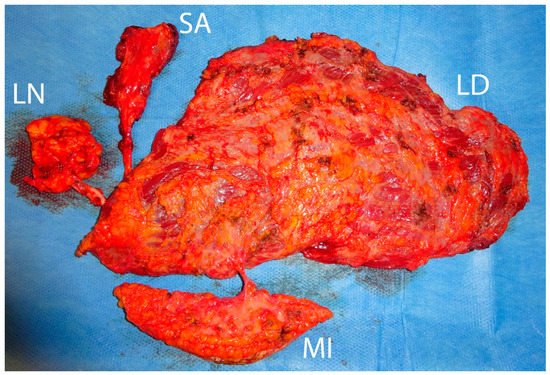 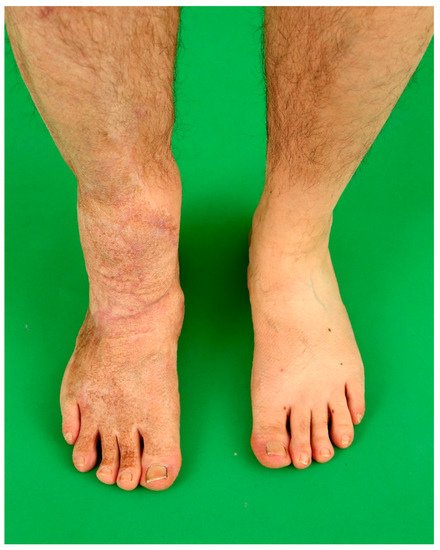 Figure 3. Postoperative outcome one year after free flap procedure. Both muscle flaps atrophied, providing a slim contour of the right ankle. Proper lymph drainage without secondary edema of the right foot is seen.
In cases of secondary burn scar reconstruction where defect closure is not urgent, a two-stage approach with pre-expansion of the planned free flap and secondary flap transfer is possible to allow large-scale replacement of contracture scars [10][11]. Figure 4, Figure 5 and Figure 6 show the reconstruction of a sternomental contracture using a pre-expanded ALT flap.

Figure 4. Ventral neck contracture one year following burns resulting from a domestic fire. Reclination of the neck is severely impaired and the patient suffers from pain due to the contracting scar. 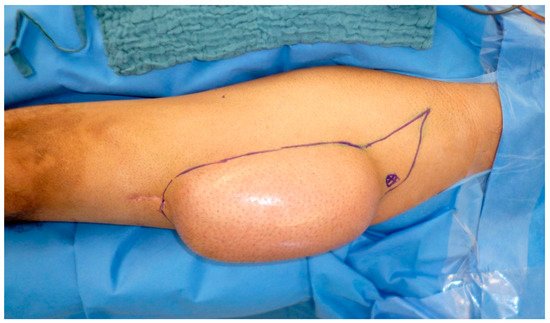 Figure 5. A rectangular expander has been implanted epifascially next to a suitable ALT perforator using intra-operative duplex ultrascan and subsequently filled with 700cc saline solution to pre-expand the planned ALT flap.

At the recipient site, radical wound debridement prior to flap transfer is necessary to reduce microbial colonization of the wound bed and to provide the best conditions for wound healing and flap integration. Thorough evaluation of the recipient vessels is crucial, especially after electrical trauma or other deep thermal trauma [12] and should include an MRA or CT angiography for the affected lower extremity and also for the upper extremity in patients with high voltage trauma. Since altered recipient vessels tremendously increase the risk of flap failure, arteriovenous loops should be used to approach the recipient vessels in uninjured areas whenever possible [13]. In contrast to defects resulting from other causes, burn wounds requiring free flap closure are often surrounded by scarred or already grafted skin areas. This lack of normal skin and subcutis often necessitates flap coverage of the flap’s pedicle and the anastomosis site to prevent potential vessel compression. In these cases, an appropriate flap design, e.g., using a “Tennis racquet-like” shape should be considered.

Microvascular free tissue transfer is often considered to bear a high risk of flap failure in patients injured by major burn trauma. Hemodynamic instability, hypercoagulability, and impaired wound healing caused by systemic inflammation and metabolic alterations can lead to an increased complication rate, particularly in primary burn reconstruction [14][15]. Hence, flap loss has been reported in literature in 12–20% of acute free flap transfers [5][16]. Of note, most flap failures were observed in patients suffering from high-voltage injuries [5]. This might be due to local damage to the recipient vessels in terms of partial obliteration, intima damage or subacute inflammation. In cases with actual electrical high voltage current flow through an extremity, these alterations might be located proximal to the actual defect [12] and might not be easily detectable when inspecting a recipient’s vessel during flap transfer. In contrast, Uslu reports eleven successful reconstructions of defects resulting from high-voltage injuries on ankle and foot by anastomosing ALT flaps in the zone of trauma or immediately adjacent thereto [17].
The ALT was used in most cases (n = 9; 64%), followed by latissimus dorsi muscle flaps (LD) (n = 3; 18%), serratus anterior muscle flap, and tensor fascia lata (TFL) flap (n = 1; 7%). The radial artery was reconstructed using ALT flaps going along with defect reconstruction in two cases. Figure 7, Figure 8 and Figure 9 show an exemplary case of this cohort. 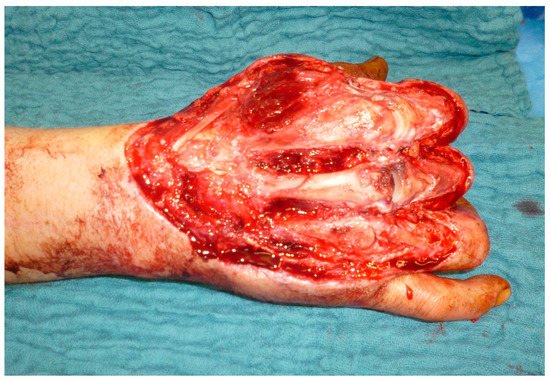 Figure 7. Defect after burn wound debridement of a full-thickness burn to the hand. Necrotic extensor tendons and necrotic capsules of metacarpal joints were resected. 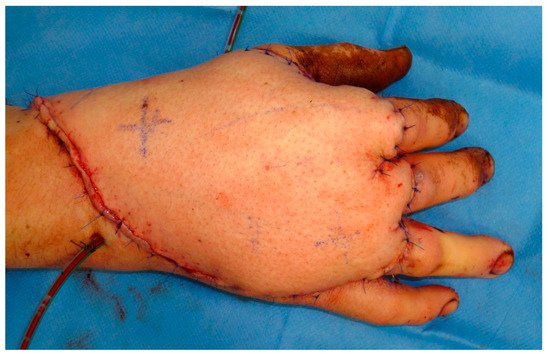 Figure 8. A bipedicular anterolateral thigh flap has been transferred for defect closure after arthrodesis to metacarpal joints 2 and 3 and extensor tendon reconstruction with autologous tendon graft. 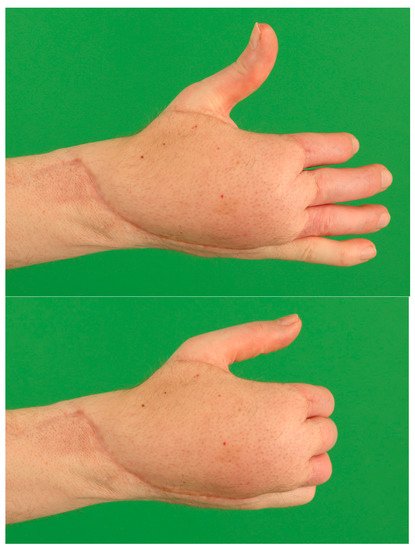