Ginseng has been reported to inhibit bacterial pathways, thereby killing bacteria indirectly. It has also been shown to protect the host from bacterial invasion.

According to MedlinePlus, lung disease is considered any problem in the lungs that prevents them from working correctly. The standard classifications of lung diseases are restrictive, obstructive, or vascular. WHO estimates that the third most comprehensive reason for death worldwide by 2030 may be chronic obstructive pulmonary disease (COPD). The majority of infections are caused by cosmopolitan agents, while geographical or tropical infections are rare. 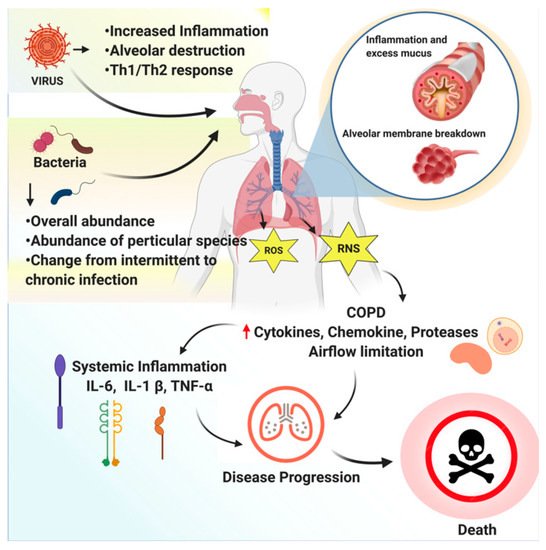 For thousands of years, herbal drugs have been used to cure numerous illnesses and to improve overall well-being. Among the commonly used herbal medicines,Panax ginsengC. A. Meyer is a recognized herb cultivated mainly in Korea, China, and the U.S.A. The principal ingredients of ginseng are amino acids, proteins, flavonoids, volatile oils, and polysaccharides [3][4]. Various forms of ginseng are available, including fresh, dried, boiled, and red ginseng, as well as extracts.

In the past 50 years, numerous clinical and preclinical research studies have been conducted on ginseng [5][6]. However, few studies have exploredP. ginsengagainst COPD and other associated disorders, such as chronic bronchitis, but these have shown encouraging results [7][8][9][10]. The key active component of ginseng was first established by Shibata et al. The active constituents’ composition and quality depend on various factors, such as the method of cultivation, harvesting season, preservation method, age, and part of the plant used [11].

Human immune cells were treated with various ginseng extracts by Lau et al. The observed anti-inflammatory role of ginseng was attributed to the combined effects of these ginsenosides targeting different immunological activity levels, thereby contributing to ginseng’s various actions in humans [12]. Studies conducted on animals have shown that ginseng provokes a robust immune response that protects against bacterial and viral infections [13][14][15]. The role of ginseng and its main active constituents in reducing the risk and continuation of flu and colds has been reported in several studies, including clinical trials [16].

Herein, we reviewed the available literature on ginseng’s active components and their role against respiratory pathogens. The present review summarized ginseng’s possible modes of action, clinical evidence, and consequences as a therapeutic agent against respiratory infections. Interventional clinical trials are needed to evaluate ginseng’s properties, including immunomodulatory, anti-inflammatory, antimicrobial, and antiviral activities.

The primary structural moiety of ginseng saponins is a hydrophobic, four trans-ring rigid steroidal skeleton [17]. Ginsenosides are saponins that are derivatives of triterpene dammarane. [18]. Most of the studies have focused on the role of ginsenosides, rather than ginseng extract, for treating diseases [4][19][20][21][22][23][24].

Microbial infections have various causes, and the resulting diseases require different antibiotics as treatment. However, the improper use of antibiotics is the cause of resistance and toxic side effects, as well as the emergence of multidrug-resistant bacteria, which is now a global health emergency [25]. In the absence of newer antibiotics, natural products are being promoted to address this issue. Ginseng has been reported to inhibit bacterial pathways, thereby killing bacteria indirectly.

Ginseng exhibits a shielding effect against the inflammation induced by a pathogen. Ginseng exerts this effect via several mechanisms, including anti-quorum sensing, inhibition of pathogen-induced hemagglutination, DNA mutagenesis, and immune-modulatory functions. An impression of ginseng’s antibacterial activity is shown in Figure 6. Ginseng and its derived components’ anti-bacterial effects are represented inTable 2. 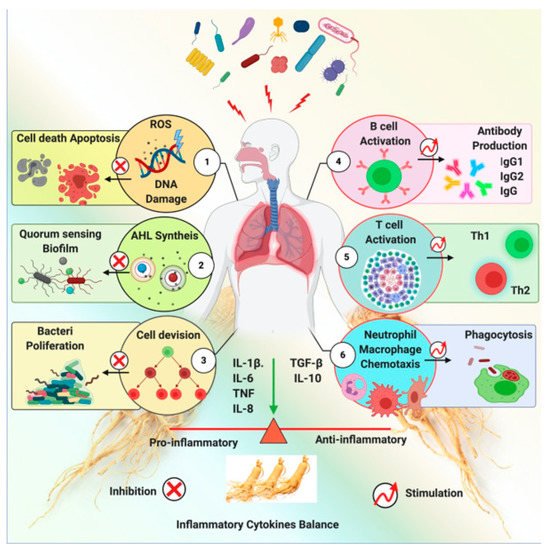 P. ginsengaqueous extract was administered by subcutaneous injection at a dose of 25 mg/kg of body weight per day, along with saline as a control. The ginseng-treated infected group showed a higher IgG2a level and lower IgG1 level than the control group. The variations in IgG1 and IgG2a subclasses imply a possible shift from a Th-2- to a Th-1 response. The findings of this study suggested that the effect ofP. ginsengcould be related to the activation of a Th-1 type of cellular immunity and down-regulation of humoral immunity [45].P. ginsengmight also be considered an add-on therapy to treat cystic fibrosis, as it can reduce bacterial infections and biofilm formation.

Ginseng is a complex mixture of several components, some of which enhance bacterial growth, while others repress it. Previous studies via animal models showed that ginseng treatment offered protection from chronic lung infection caused byP. aeruginosa. However, an aqueous extract of ginseng in concentrations of 0.5–2.0% did not inhibitP. aeruginosa, but it did significantly limit the formation ofP. aeruginosa’s biofilm. This was suggested as a possible mechanism noted in a previous study by which ginseng helped the bacterial clearance from animal lungs in vivo.

These functions deregulate the humoral immune response and lessen the formation of immune complexes [47][48]. Ginseng could play a vital role in combating microbial infections, particularly againstP. aeruginosapneumonia. PMNs are a common cause of cystic fibrosis, the leading cause of morbidity and mortality [49][50]. Thus, ginseng shows good therapeutic activity

Most of theS. pneumoniaeproduce diseases; a few of the serotypes cause most of the pneumococcal infections. The human respiratory tract has commensal Pneumococcus, which is the cause of local infections, as well as many invasive diseases, such as meningitis and sepsis, due to its virulence factors. Additionally, pre-treated mice showed lower morbidity and bacterial numbers. It thereby strengthens cell continuance against pneumococcal infection [51].

Korean red ginseng extract’s protective effect against pneumococcal infection and sepsis have been investigated. Colonization, survival rate and body weight were calculated. Mice treated with 100 mg/kg of KRG had significantly higher survival rates and body weights than those of the non-treated controls. A dosage of 100 mg/kg of KRG protected the host cells from fatal pneumococcal sepsis by inhibiting inflammation and intensifying bacterial clearance, augmenting cell survival against the pneumococcal infection [52].

Results have shown that ginseng relieves the symptoms and prevents respiratory infections. COLD-fX has been isolated from the roots of American ginseng. It is effective and safe against respiratory pathogens, as well as in reducing the viral load of patients who are prone to seasonal influenza. The immunomodulatory constituents of COLD-fX act through toll receptors and influence a rise in cell numbers and functions in innate and adaptive immune systems [53].

A randomized, double-blinded trial investigated the effectiveness of COLD-fX in acute respiratory illness (ARI). After the dosing of COLD-fX in mice in vitro, COLD-fX (CVT-E002) was reported to cause a significant increase in lymphocyte proliferation and cytokine production (IL-1, IL-6, TNF-α, and nitric oxide) from peritoneal macrophages. The extract’s ability to stimulate IL-2 and IFN-γ release could be attributed to its efficacy against respiratory infections. It was found that COLD-fX was safe and reduced the severity and incidence of upper respiratory tract infections [54].

Mono-preparations of ginseng behave as a placebo, as reported in several clinical trials. Isolated cases reported more serious adverse events, but it is difficult to provide evidence of casualty. Ginseng as an add-on therapy has shown severe adverse events and even casualties; however, after reviewing all the cases, it is difficult to conclude thatP. ginsengcould cause the problems. Combination therapy does appear to be more closely associated with adverse events [10][56].

A pilot study of a randomized, controlled trial was conducted to evaluate the efficacy of GINST and GS-3K8 modified ginseng extracts in acute respiratory illness. ginseng(G115) dose of 100 mg twice daily for 12 weeks improved the pulmonary function test of respiratory endurance in 92 patients with COPD [57]. In two groups of patients [(n = 37) (n = 38)], the first group was given 875 mg amoxicillin and 125 mg clavulanic acid, while the second group was given an anti-bacterial treatment with 100 mg standardized ginseng extract G115 twice daily for nine days. Those patients who have complicated bacterial clearance may receive benefit from ginseng [9].

They studied the role of ginseng extract in improving the quality of life and providing symptomatic relief. The trial also suggested that ginseng treatment was safe and had remedial value, as it provided symptomatic relief in patients with COPD [58]. As a remedial treatment in respiratory infections, ginseng shows potential for the development of new herbal medicines. More effective clinical trials are still needed to prove the potency and effectiveness of ginseng against respiratory infections.