Fluidized gasification reactors can be used to produce hydrogen. They are operated in three modes including bubbling, circulating, and dual beds, as depicted inC. In a bubbling fluidized bed (BFB), the fuel is introduced from the bottom or side of the bed. The bed starts bubbling when the velocity of gasification agent is beyond the minimum fluidization velocity.

The United Nations (UN) has promoted climate neutrality to produce no net greenhouse gas (GHG) emissions for years, as GHG emission has been considered one of the major causes of global warming [1]. GHG emissions in the atmosphere from fossil fuels, generated either by power plants or automobiles, have also risen and become a tremendous threat to environmental sustainability [2][3]. In recent years, a series of efforts shas been made, including using renewable resources or clean energy such as hydrogen fuels to mitigate the situation, reducing carbon dioxide emissions and in realizing sustainable development [4][5][6][7]. However, the conventional generation techniques of hydrogen are adopted from fossil fuels, including steam methane reforming (SMR) and derivations from natural gas, also known as “gray hydrogen” [8]. On a related note, hydrogen production using renewable resources is called “blue hydrogen” or biohydrogen (such as by the means of electrolysis, nuclear, solar photovoltaic-PV, wind, hydro or geothermal technologies), which is regarded as more environmentally friendly [3][5][6][9][10][11][12][13]. The current hydrogen generation technologies from different feedstocks are summarized in Figure 1. Apparently, the balance of feedstock between deploying fossil fuel and renewable resources for hydrogen generation has become lopsided, and this trend will become more prominent in the foreseeable future.
While a large number of techniques are available for hydrogen generation, the employment of those techniques faces great challenges when it comes to considering the more complex factors (e.g., cost-effectiveness, reliability and efficiency). For example, electrolysis is considered to be not cost-effective, and bioprocessing through dark fermentation using biomass as the feedstock is not efficient due to its intrinsic, slow biological processing feature [14]. Recently, biomass gasification by fluidized bed reactors (FBRs) has been found to significantly enhance the efficiency of hydrogen production, but its obvious drawbacks, such as complex reaction mechanisms and catalyst usage, somehow limit its application [15][16]. For fluidized bed operation, many operational parameters (such as the carbon content, residence time, lower heating values and particle size) play vital roles in determining the expected outcomes (e.g., conversions and yield) [17], and there are very few examples in the literature that try to systematically correlate these critical operational parameters with the corresponding performances. Therefore, this initiates our interest in using our developed artificial neural networks, coupled with a response surface methodology (ANNs-RSM) algorithm, to assess the statistical significance of the investigated operational parameters upon the performances of FBRs during hydrogen generation. 2. Statistical Analysis of Parameter upon Output

In this review, among the different operational parameters, we choose seven parameters (temperature, residence time, equivalent ratio, steam-to-biomass ratio, carbon content, lower heating value and particle size) due to availability in reported literatures. Taking the feedstock sources for an example, different sources of feedstock may own various calorific values, carbon content, or moisture content that can significantly affect the conversion rate to hydrogen. The results are summarized in Table 1 and Table 2 (Table 1 for different types of FBGs and Table 2 for general FBGs that the types were not specified in the literatures). Using the collected references as training data set via ANNs-RSM algorithm, the predictions were made against the actual reported values from references. The results are shown in Figure 2. Apart from some values possessing relative higher uncertainties over ±20%, the majority of calculated data fall into the reasonable range, indicating that our constructed network can generate reliable predictions. 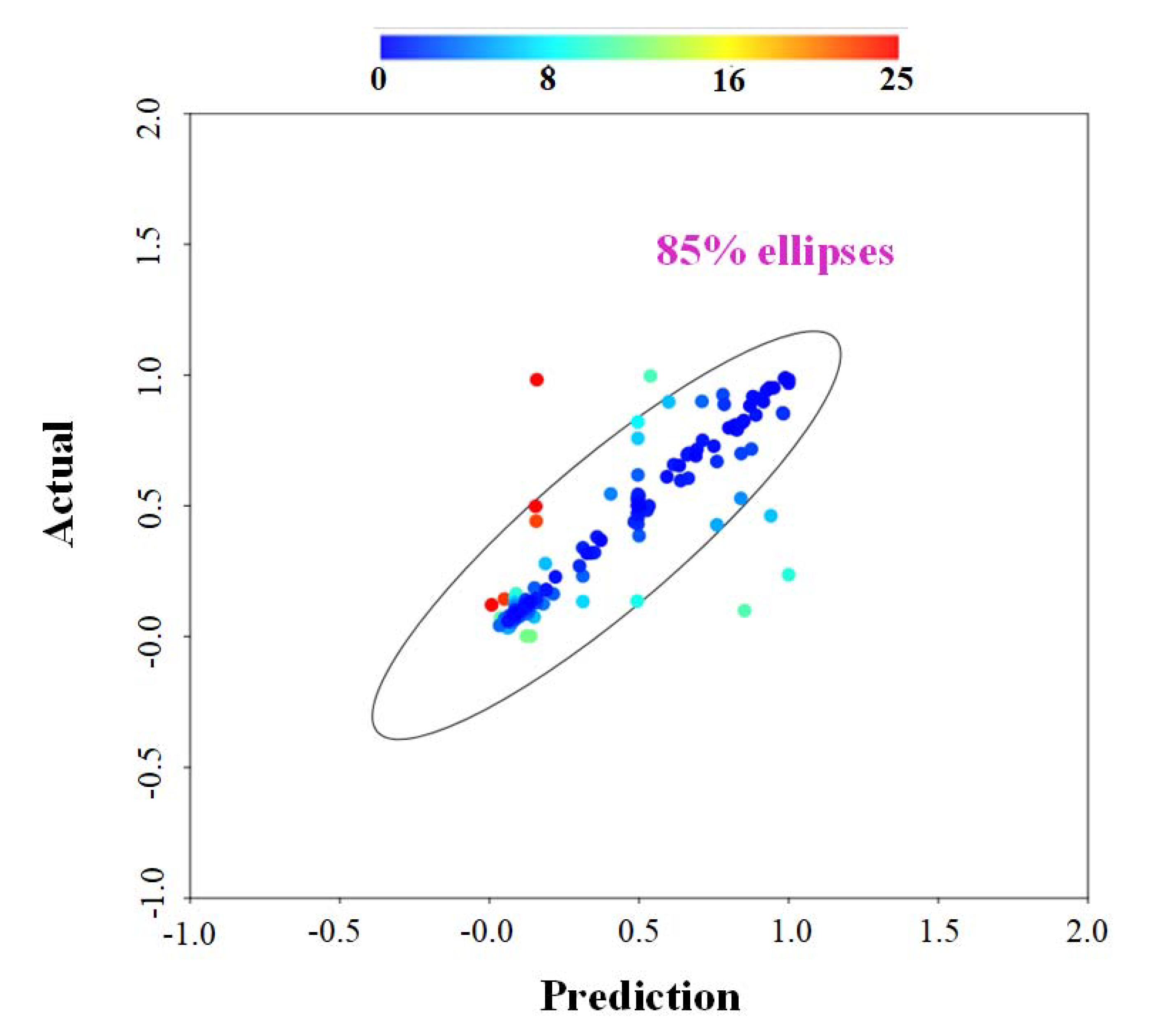 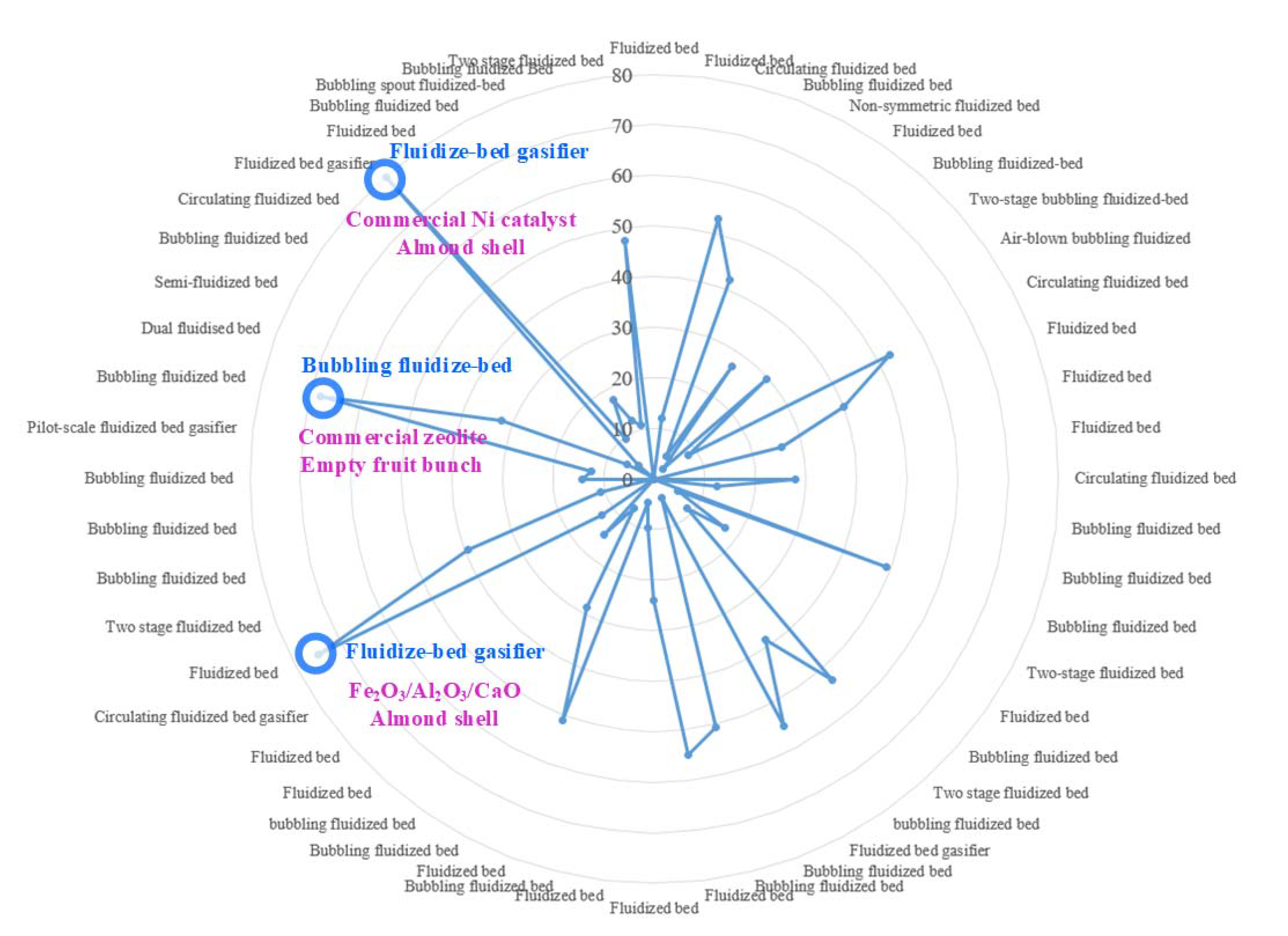 We compared the commonly used hydrogen production technologies including steam methane reforming, electrolysis, and biomass gasification. Among the technologies, biomass gasification using fluidized bed reactor was thoroughly reviewed, including the types and operating conditions. Biomass gasification can be considered as a promising alternative technology for hydrogen production owing to the renewable, abundant, carbon neutral, and cost-effective nature of the feedstock. Subsequently, biomass gasifiers including entrained flow gasifier, fixed bed and fluidized bed reactor (FBR) were compared. Due to the inherent advantage of enhanced mass and heat transfer, the FBR was identified as the most promising biomass gasification technique for hydrogen production. In addition, to quantitatively assess the pivotal operational parameters of FBR, seven key inputs and three outputs were extracted from the reported literatures as a training data set. These inputs are SBR, ER, temperature, PS of feedstock, residence time, LHV, and CC. The three outputs are HY, HC, and CCE. The results of the statistical analysis indicate that six binary parameters are statistically significant to the outputs. In terms of high HY, SBR, and ER, relatively low values were suggested for efficient reaction and economic considerations. A high HC was proposed based on a shorter reaction time within 180 min under 850 °C for biomass that contained high LHV and fine particle sizes. The optimal CCE values could be obtained within an ER range of 0.15 to 0.35, operating temperature of 700 to 850 °C, reaction time within 180 min, and with CC values beyond 8%, as inputs. This analysis may provide a revealing insight for users who wish to realize high working efficiency using biomass gasification technology for hydrogen production.