HUWE1 is postulated as a therapeutic response modulator, affecting the collision between platinum-DNA adducts and the replication fork, the primary cytotoxic action of platins.

HUWE1 is a ubiquitin (Ub) E3 ligase that functions as a terminating enzyme in the process of protein ubiquitination. Following the consecutive actions of Ub-activating (E1) and -conjugating (E2) enzymes, HUWE1 post-translationally modifies other proteins by adding different types of Ub chains. A well-known function of HUWE1 is that it targets other proteins for degradation in the Ub-proteasome system (UPS) via K48-linked poly-Ub chains [1]. In contrast to being a facilitator of protein degradation, HUWE1 regulates processes such as protein activation and cellular signal transduction via K63-linked polyubiquination [1][2]. HUWE1-mediated monoubiquitination and less well understood K6-linked polyubiquitination further indicate its multifaceted cellular regulatory effects [3][4][5][6]. Deubiquitinating enzymes on the other hand counteract the post-translational actions of HUWE1. In addition to the catalytic HECT domain, HUWE1 contains a Ub-associated (UBA) domain, a Ub-binding motif (UBM1) domain, and a Bcl-2 homology region 3 (BH3) domain [7][8]. While the functions of the UBM1- and UBA domains are still obscure, evidence indicates that the BH3 domain allows HUWE1 to specifically interact with the induced myeloid leukemia cell differentiation protein (Mcl-1), an anti-apoptotic member of the B-cell lymphoma 2 (Bcl-2) family [9]. This interaction implies a modulatory role for HUWE1 in apoptosis. Many other HUWE1 targets with roles in the DDR have already been identified [10].
HUWE1-mediated ubiquitination is a highly coordinated process and deregulation has been linked to tumorigenesis as well as tumor suppression [7][8]. Given its modulatory role on mediators such as Mcl-1, the breast cancer type 1 susceptibility protein (BRCA1) and p53, HUWE1 is linked to DNA damage repair pathways and apoptosis [9][11][12]. These processes are not only hallmarks of cancer, but also influence cellular sensitivity to platins and other genotoxins [13][14].

A severely threatened genome shifts the DDR from a reparative state towards controlled cell death [15]. Apoptotic signaling follows interconnected patterns that ultimately converge on caspase-executioners for cellular decay. Genotoxins including platins rely on the intrinsic, mitochondrial, pathway to induce cell death. Intrinsic apoptosis is regulated by a delicate balance between pro- and anti-apoptotic members of the Bcl-2 family. These control the release of cytochrome c (cyt c) into the cytoplasm [16][17]. In response to genotoxic stress, pro-apoptotic Bcl-2 induction destabilizes the mitochondrial membrane, thereby facilitating the cytoplasmatic release of cyt c and caspase activation [17]. The tumor suppressor p53 is a principal pro-apoptotic non-Bcl-2 protein and DDR effector that promotes this process [18]. Post-translational activation of p53 in response to cellular stress triggers an apoptotic cascade [19].
The intrinsic apoptotic pathway is influenced by the effects of HUWE1. Considering this process, HUWE1 directly regulates p53 and Mcl-1, an anti-apoptotic member of the Bcl-2 family. In addition, HUWE1 impairs the post-translational activation of p53 via regulation of ATM and histone deacetylase 2 (HDAC2) (Figure 1). HUWE1-mediated effects on the cellular ability to induce apoptosis in response to platins might be considered as a potent driver of therapy sensitivity. 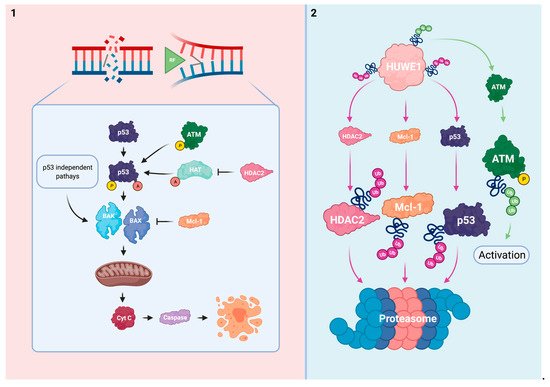