Different geophysical methods provide information about various physical properties of rock formations and mineralization. In many cases, this information is mutually complementary. At the same time, inversion of the data for a particular survey is subject to considerable uncertainty and ambiguity as to causative body geometry and intrinsic physical property contrast. One productive approach to reducing uncertainty is to jointly invert several types of data. Non-uniqueness can also be reduced by incorporating additional information derived from available geological and/or geophysical data in the survey area to reduce the searching space for the solution. This additional information can be incorporated in the form of a joint inversion of multiphysics data.

Information from different surveys is mutually complementary, which makes it natural to consider a joint inversion of the data to a shared model, a process which can be implemented using several different physical and mathematical approaches. Integration of multiphysics data also helps reduce ambiguity, which is typical for geophysical inversions. Over the last decades, several approaches were introduced to joint inversion of geophysical data. The traditional technique is based on using the known petrophysical relationships between different physical properties of the rocks within the framework of the inversion process [1][2][3][4][5][6][7][8][9]. The joint inversion can use these relationships or can indicate and characterize the existence of this correlation, yielding an improved final model.

Another approach to joint inversion uses a clustering concept from statistics, which assumes that the subsurface geology can be described by the models with petrophysical parameters forming a specific number of the known clusters in the space of the models (e.g., [10][11][12]). This approach requires a priori knowledge of the parameters of these clusters, which is related to the lithology of the rocks.

In the cases where the model parameters are not correlated but nevertheless have similar geometrical features, joint inversion can be based on structure-coupled constraints. For example, these constraints can be implemented by the cross-gradient method, which enforces the gradients of the model parameters to be parallel [13][14][15][16][17].
There still exist many challenges in incorporating typical geological complexity in joint inversion. For example, analytic, empirical, or statistical correlations between different physical properties may exist for only part of the shared earth model, and their specific form may be unknown. Features or structures that are present in the data of one geophysical method may not be present in the data generated by another geophysical method or may not be equally resolvable.

Let us consider forward geophysical problems for multiple geophysical data sets. These problems can be described by the following operator relationships:

Joint inversion of multiphysics data can be reduced to minimization of the following parametric functional,

where (⋅,⋅) stands for the inner product in the corresponding Hilbert space of model parameters [7].
In a general case of n model parameters, the Gramian is computed as the determinant of the Gram matrix as follows: 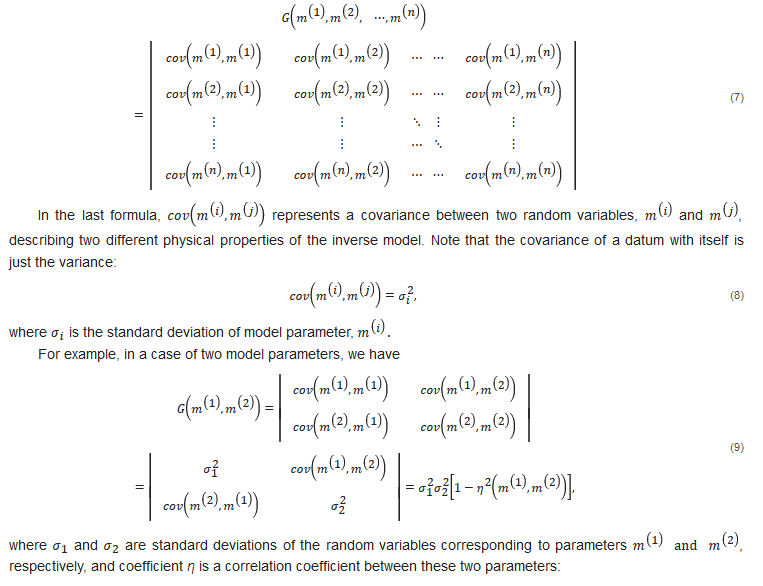 One of the most widely used approaches to imposing the structural constraints on the results of the joint inversion is based on the method of cross gradients [13][14][15][16][17]. The basic idea behind this method is that the gradients of the model parameters should be parallel in order to enforce the geometrical similarities between the interfaces of the models. Within the framework of the cross-gradient method, this requirement can be achieved by minimizing the norm square of the cross product of the gradients of these functions:

In the framework of the Gramian approach, the same requirement for the gradients of the model parameters being parallel is achieved by minimizing the structural Gramian functional, G ∇ , which, in a case of two physical properties, can be written using matrix notations, as follows:

By minimizing the Gramian functional, G ∇ , we enforce the linear correlation between the gradients of the model parameters, making these vectors parallel to each other. The method can also be naturally expanded for any number, n, of the model parameters, by considering the corresponding Gramian matrices between the gradients of the different parameters. The practical advantage is, again, in the quadratic nature of this functional, which was demonstrated in [6][7]. This property was proved based on the concept of the Gramian space which was shown to be a Hilbert space with all related useful properties.
For example, we can introduce a stabilizing term in the parametric functional shown in Equation (2) as a superposition of the structural Gramians between the first and all other physical model parameters:

The constraints based on minimization of the Gramian of the model parameters, Equations (5) and (6), or of their gradients, Equations (12) and (13), can be treated as the global constraints, because they enforce similar correlation conditions over the entire inversion domain. In practical applications, however, the specific form of the correlations may vary within the area of investigation. To address this situation, we can subdivide the inversion domain, D, into N subdomains, D k , with potentially different types of relationships between the different model parameters, and define the Gramians, G k , for each of these subdomains separately:

In this case, the localized Gramian constraints will be based on using the following stabilizing functional:

For example, in a case of two model parameters, localized Gramian (16) takes the form:

and the corresponding stabilizing functional is written as follows:

The structural similarities between various petrophysical models of the subsurface can be enforced by using the joint total variation or focusing stabilizers [21][22]. For the solution of a nonlinear inverse problem shown in Equation (1), following [21][22], we introduce the following parametric functional with focusing stabilizers,

is proportional to the combined volume, or support, occupied by domains with anomalous physical parameters for small e.
Indeed, we can rewrite Equation (20) as follows: 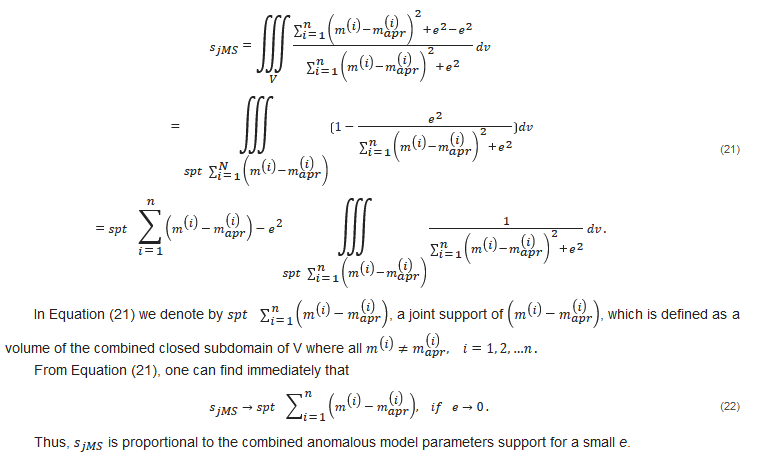 It can be easily established by a simple geometrical analysis that the combined anomalous model parameters support reaches the minimum when the volumes occupied by anomalous domains representing various physical properties coincide. Indeed, if the anomalous properties are in different locations, their combined support is larger in comparison to cases when the locations are the same.
A joint minimum gradient support functional (JMGS) is defined as follows:

Repeating the algebraic transformation presented in expression (21), one can demonstrate that: