The inhibitors of β-lactamases (BLI) have gained a prominent role in the safeguard of beta-lactams. In the last years, new β-lactam–BLI combinations have been registered or are still under clinical evaluation, demonstrating their effectiveness to treat complicated infections. It is also noteworthy that the pharmacokinetics of BLIs partly matches that of β-lactams companions, meaning that some clinical situations, as well as renal impairment and renal replacement therapies, may alter the disposition of both drugs. Common pharmacokinetic characteristics, linear pharmacokinetics across a wide range of doses, and known pharmacokinetic/pharmacodynamic parameters may guide modifications of dosing regimens for both β-lactams and BLIs. However, comorbidities (i.e., burns, diabetes, cancer) and severe changes in individual pathological conditions (i.e., acute renal impairment, sepsis) could make dose adaptation difficult, because the impact of those factors on BLI pharmacokinetics is partly known. Therapeutic drug monitoring protocols may overcome those issues and offer strategies to personalize drug doses in the intensive care setting. Further prospective clinical trials are warranted to improve the use of BLIs and their β-lactam companions in severe and complicated infections.

For several decades, the surge of resistant bacterial strains and the severity of their infections have represented the most compelling emergences in antimicrobial chemotherapy. Indeed, the efficacy of drugs may last for a limited time due to the progressive selection of resistant strains by several causes (i.e., excessive prescription and misuse of drugs). Among β-lactams, what happened to methicillin is still a paradigmatic example of drug inactivation by β-lactamase (BL) enzymes. Overall, BLs can inactivate β-lactams and have a pivotal role in treatment failures, reduction of therapeutic options, and the emergence of resistance [1][2]. Therefore, preclinical research and many clinical trials are evaluating new bactericidal β-lactams and β-lactamase inhibitors (BLI).
Different clones of the same bacterial species may display unrelated expression patterns of BLs inactivating enzymes; thus, some authors have postulated that the dose of BLI would be based on the turnover of the BLs to bring the strain susceptibility below the established breakpoints for the β-lactams alone [3]. However, it could be difficult to optimize the dose of BLIs based on BL expression, because the latter is not always associated with the antibacterial efficacy of the β-lactam [4].
It is worth noting that the PK/PD characteristics of BLIs resemble that of their β-lactam companions. It is widely accepted that prolonged or continuous intravenous (IV) infusions of β-lactams may maximally exploit their bactericidal effect owing to their time-dependent killing [5][6]. Therefore, the bactericidal effect is better predicted by the percentage of time between two consecutive administrations during which plasma concentrations are higher than MIC value (%T > MIC). Several studies have demonstrated that for some BLIs a threshold concentration (Ct) higher than a critical value or a free-drug area under the curve (fAUC) over MIC ratio (fAUC/MIC) could represent the PK/PD parameters that predict the BLI efficacy and may guide the choice of the most appropriate dosing regimen. In other words, the efficacy of a β-lactam–BLI combination may depend on the relationships among the pharmacokinetics of the BLI, its dosing regimen, and the type/expression of BLs against which the BLI has a variable substrate affinity [7]. Consequently, BLI threshold values are “isolate/enzyme dependent” [8].
The possibilities of optimizing chemotherapeutic regimens may be limited and rapid changes in patient’s clinical conditions may require frequent dose adjustments. However, β-lactams and BLIs have similar PK characteristics that may help treatment optimization. Indeed, the hydrophilic structure of both β-lactams and BLIs limits absorption and tissue distribution, while renal excretion represents the main excretory pathway. Consequently, those factors that may alter drug disposition, as well as “third space”, renal impairment and renal replacement therapies (RRT), affect both β-lactams and BLIs [9]. Due to common pharmacokinetic characteristics (i.e., similar plasma half-lives) shared by β-lactams and BLIs, dose optimization of BLI may mirror the changes in dosing regimens of β-lactams. Finally, the activity spectrum of some β-lactam–BLI combinations may be effective in difficult-to-treat infections, owing to a synergic interaction between the two drugs. For example, aztreonam (ATM), in combination with ceftazidime (CAZ)–avibactam (AVI), is effective against Gram-negative Enterobacterales, producing metallo-BLs (MBLs) [10].
In origin, the former molecules as clavulanic acid, sulbactam, and tazobactam, share the same chemical core as penicillin (Figure 1). 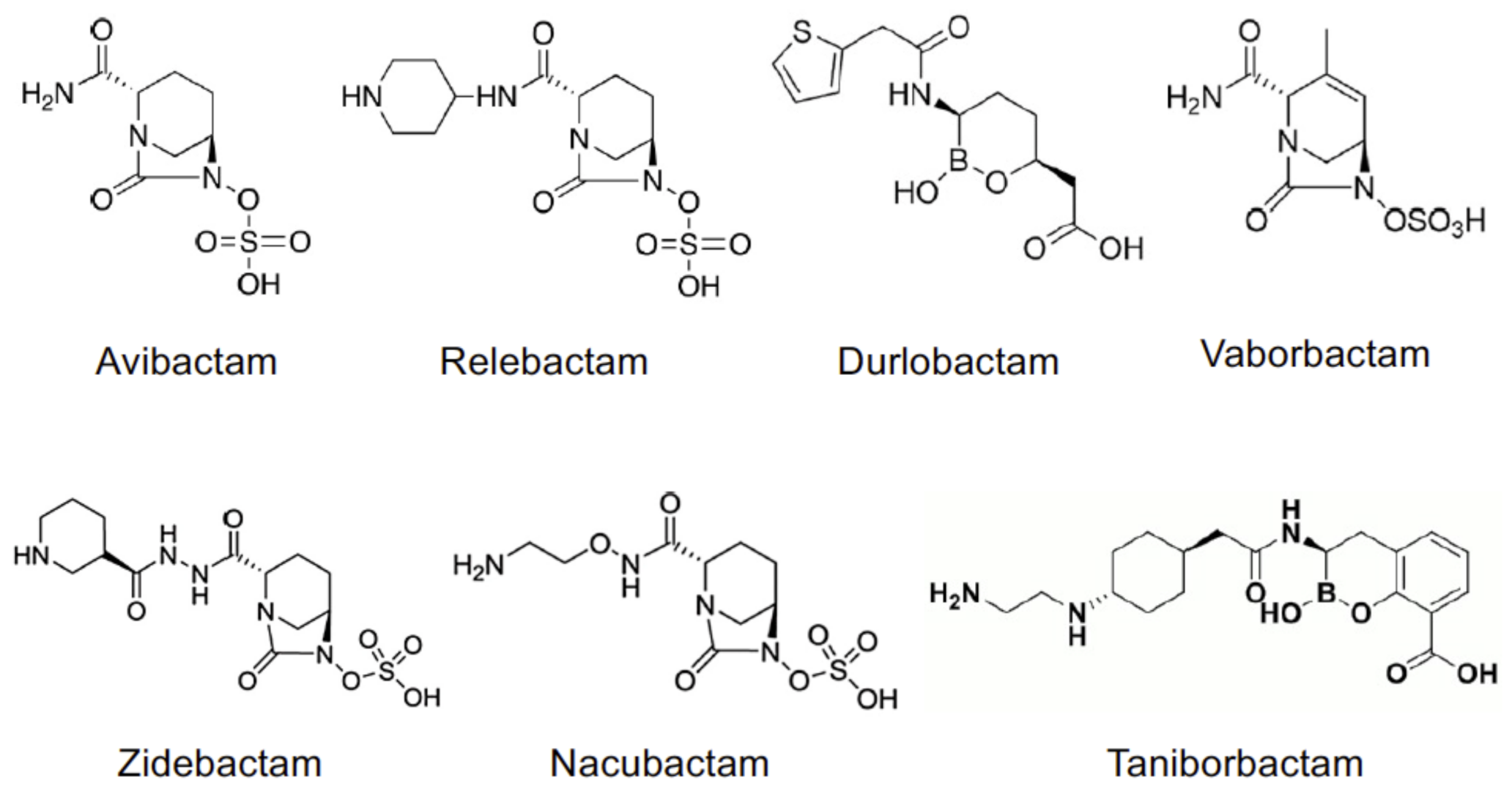 BLIs have a hydrophilic structure that may influence their pharmacokinetics as that of β-lactam companions. Except for CLA, BLIs have a low oral bioavailability that requires an IV administration, a volume of distribution (Vd) limited to the extracellular space, and reduced plasma protein binding. Overall, the maximum interindividual variability in drug pharmacokinetics accounts for 35%. The relative hydrophilicity allows the renal excretion of BLIs with a negligible hepatic metabolism so that the change in renal function is the first cause of dose adjustment. Among the non-β-lactam BLIs, AVI is a reference because of its larger mass of data with respect to other molecules (Table 1).
Table 1. Main pharmacokinetic characteristics of BLIs and their beta-lactam companion for comparison.
1 Abbreviations: ATM, aztreonam; AVI, avibactam; AZT, aztreonam; CAZ, ceftazidime; CEF, ceftaroline fosamil; DUR, durlobactam; IMI, imipenem; MER, meropenem; NAC, nacubactam; REL, relebactam; SUL, sulbactam; TAN; taniborbactam; VAB, vaborbactam; ZID, zidebactam; CL, clearance; Vd, volume of distribution; t1/2, terminal elimination half-life; PPB, plasma protein binding.
The most recent BLIs represent appropriate options for the therapy of severe and difficult-to-treat infections caused by multiresistant bacterial strains. However, both pharmacodynamics and pharmacokinetics could be highly variable among patients depending on the expression of BLs and the individual’s clinical conditions.
The presence of multiple enzymes, their abundance, and mutational status certainly influence the outcome of chemotherapy [26], and appropriate preclinical models may evaluate PK/PD characteristics of BLIs in the presence of the β-lactam [27]. The time above a threshold concentration (%fT > Ct) and the fAUC over Ct or MIC values confer a time dependency to the activity of BLIs in restoring the efficacy of β-lactams against resistant strains. Therefore, every factor that may alter the pharmacokinetics of BLIs could reduce the attainment of desired PK/PD targets. In other words, the pharmacokinetic variability of drugs depends on the physical and chemical properties of BLIs in association with both clinical conditions of the patients and eventual additional medical interventions (i.e., hemodialysis, continuous venovenous hemodialysis, etc.). The pharmacokinetic studies demonstrated that CrCl is capable of significantly influencing the CL of BLIs, even if other concomitant factors (i.e., obesity, comorbidities, age, race) may contribute to the alteration of drug pharmacokinetics [28][29][30].
Therefore, the knowledge about the disposition and excretion of BLIs guides the discussion of some key points. Pharmacokinetic and pharmacometrics studies demonstrate that CrCl significantly affects the renal excretion of the BLI, and that relationship is linear or is approaching linearity [31][32]. Furthermore, a threshold value of GFR (40 or 50 mL/min) represents a pragmatic index to adjust the dosing regimen β-lactams–BLI combinations [11][17]. As a matter of fact, changes in renal excretion of BLIs (also including the intervention of the HD) may mirror those affecting the pharmacokinetics of β-lactam companions. For example, REL and imipenem changes according to renal impairment had the same magnitude (1.38–3.05-fold and 1.22–2.01-fold, respectively) [33], while the t1/2 values of both CAZ and AVI (2.3 and 2.2 h, respectively) increased to the same extent (5.17 and 5.92 h, respectively) in a patient with acute renal failure receiving CVVHDF [34]. Furthermore, β-lactams and their BLIs may also feature alterations in Vd [35][36]. Therefore, the dose adjustment can simultaneously involve both β-lactam and BLI, guaranteeing a dose modification of the same extent for both drugs across a wide interval of doses due to linear pharmacokinetics [29]. Some peculiar characteristics (for example, different plasma protein binding of drugs) could limit that approach.
The dosing regimen (Table 2) may be adjusted according to the severity of renal impairment, but comorbidities may contribute to utmost pharmacokinetic alterations that decrease the probability of PK/PD target attainment. In comorbid patients with severe renal impairment (i.e., eGFR, 15–30 mL/min), the registered dosing regimen is CAZ-AVI 0.75/0.1875 g q12h. However, high doses (i.e., CAZ-AVI 1/0.25 g q12h) may achieve a 90% probability of target attainment when CAZ MIC = 1 mg/L in the presence of AVI [29].
Table 2. β-lactam plus BLI combinations registered for clinical use in Europe or in clinical evaluation for the treatment of several infections.
1 Abbreviations: AVI, avibactam; AZT, aztreonam; CAZ, ceftazidime; CEF, cefepime; DUR, durlobactam; IMI, imipenem; IMI / CIL, imipenem/cilastatin; MER, meropenem; REL, relebactam; SUL, sulbactam; VAB, vaborbactam; cIAI, complicated intra-abdominal infection; cUTI, complicated urinary tract infection; HAP, hospital-acquired pneumonia; VAP, ventilator-associated pneumonia; HV, healthy volunteers; IV; intravenous.
The relationship between renal impairment, comorbidities, and achievement of PK/PD targets is partially predictable a priori, such that a fine-tuning optimization of dosing regimen may be pursued by therapeutic drug monitoring (TDM) [42]. Chromatographic techniques are widely available to measure plasma concentrations of drugs [43][44][45], with turn-around time values that allow rapid changes in dosing regimen even in intensive care settings [46]. Furthermore, blood withdrawal at prespecified time points, as well as immediately before the next dose (to obtain the Cmin value) or at midpoints (to evaluate whether the plasma concentration does exceed the target Ct value), can allow a quick check of predicted clinical outcome. In addition to this, population pharmacokinetic models may anticipate treatment efficacy in every patient, simulate different dosing regimens, and calculate PK/PD parameters (i.e., fAUC) from a sparse blood sampling scheme or based on TDM protocols [47][48].
In conclusion, the non-β-lactam BLIs available, in combination with β-lactam companions, represent effective therapeutic options to treat severe infections caused by BL-producing strains (Table 3). In the presence of renal impairment, the main factor influencing BLI disposition, the linear pharmacokinetics of these agents allow dose adjustments. However, other variables are possible causes of the large interindividual variability among critically ill patients; hence, future clinical studies will increase the knowledge about pharmacokinetics and PK/PD of β-lactam–BLI combinations. Finally, TDM protocols, modelling and simulation may help the timely optimization of dosing regimens, bringing personalized medicine in intensive care setting, and reducing the risk of resistance emergence.