Buildings contribute to greenhouse gas emissions that cause environmental impacts on climate change. Net Zero Energy (NZ) buildings would reduce greenhouse gases. The current definition of NZ lacks consensus and has created uncertainties, which cause delays in the adoption of NZ. There is a need to re-evaluate the existing definitions, standards, and requirements to advance the use of renewable technologies, improved energy efficiency, and electrification. This approach will help to speed up achieving the NZ targets.

In 2015, the Paris Agreement [1] raised an international effort toward climate mitigations, where 197 countries, including the three largest emitters of the world, China, the United States (US), and the European Union (EU) have released climate action targets to become carbon neutral [2][3][4][5][6][7]. A variety of technologies, standards, and strategies have been published for buildings to achieve NZ, including improved energy efficiency, fuel source shift, and on-site power generation [8][9][10][11][12][13][14][15][16]. The European Climate Foundation [17] presented that, despite “the urgency to decarbonize Europe’s buildings, the sector is not currently on a trajectory to zero greenhouse gas emissions by 2050,” and emphasized that the current policies are inadequate to meet the target [17]. It was reported that “under current policies, annual emissions from residential buildings will decrease by only 30% by 2050” [18].

To achieve these goals, the current NZ regulations need to be clarified. Competing definitions from worldwide organizations with various calculation methods created uncertainties in defining a project NZ. The authors stated that “despite, or possibly because of, a continuing debate over definitions, aspiration has not been met by reality” [19]. [20] were concerned that “there is no common definition for NZEBs”, and stated that “the definition depends completely on the purpose intended by the designer [20].”

[21] categorized the main variations in NZ into four definitions: NZ source energy, NZ site energy, NZ energy emissions, and NZ energy costs. The definitions were influenced by the national energy concerns on primary energy sources, designers’ interest in site energy regarding the energy code requirements, climate concerns on CO2emission reductions, and stakeholders’ desires on cost savings [21]. NZ concepts were analyzed to address the need for a common and clear definition, and its impact on achieving the targets [21]. The result from applying each definition to a set of selected low-energy buildings highlighted (1) the impact of each NZ definition on the design, and (2) the large variations in NZ definitions [21].

This review reports the current variations in the NZ concept as the main cause of uncertainty, thus a barrier for achieving the targets. Current NZ literature underlined the necessity of clarifying the NZ concept and energy analysis strategies, before further implementation, shown in Table 1.

Studying the current comprehensive NZ literature, this paper proposes a Process for Clarification to Accelerate Net Zero (PC-A-NZ) through three steps: variations, strategies, and requirements. Clarifying the ambiguity of the current concept, and thus the existing calculated methodologies before further development of the NZ is highlighted. We expand on the existing NZ literature to address the variations in definition and strategy from the commonly used NZ developments and the potential requirements to clarity the NZ and enhance its acceptance. The PC-A-NZ is a process to re-evaluate how to improve or modify what has been done on NZ by presenting three flowcharts.

In 2015, 197 countries adopted the Paris Agreement [1] to reduce their GHG emissions and "limit the global temperature rise to well below 2 °C from pre-industrial levels and pursuing efforst to limit the temperature increase to 1.5 °C above pre-industrial levels [32]." The Intergovernmental Panel on Climate Change (IPCC) Special Report on Global Warming of 1.5 °C [33] simplified the required actions to take by the governments to achieve their emission reduction pledge. IPCC’s timescale provides a 50% chance of keeping global warming below 1.5 °C [34]. Currently, 121 countries released climate action targets to become NZ or carbon neutral along with 509 cities, and 2163 companies [35].

[36] requires all new buildings from 2021 to become nearly NZ, defined it as “Nearly Zero-Energy Building (NZEB)—a building that has a very high energy performance, as determined in accordance with ‘Annex I’.” EPBD stated that “the nearly zero or very low amount of energy required should be covered to a very significant extent from renewable sources, including sources produced on-site or nearby” [36]. The Federation of European Heating, Ventilation and Air-conditioning Associations (REHVA) [37] defined nearly NZBs as “nZEB—a grid connected building with very high energy performance”, where nZEB “balances its primary energy use so that the primary energy feed-in to the grid or other energy network equals to the primary energy delivered to nZEB from energy networks.” According to REHVA [37], “annual balance of 0 kWh/(m2a) primary energy use typically leads to the situation where significant amount of the on-site energy generation will be exchanged with the grid.”

The US Department of Energy (DOE) [26] released a standard definition for NZBs as “Zero Energy Building (ZEB)—an energy-efficient building where, on a source energy basis, the actual annual delivered energy is less than or equal to the onsite renewable exported energy.” A list of key terms defined by the DOE is shown in Table 2.

According to the International Living Future Institute (ILFI) [38], NZB is defined as “NZEB—one hundred percent of the building’s energy needs on a net annual basis must be supplied by on-site renewable energy. The US Environmental Protection Agency (EPA) [39] defined NZB as “Net Zero Energy (NZE)—producing, from renewable resources, as much energy on-site as is used over the course of a year.” The New Buildings Institute (NBI) [40] defined NZB as “Zero Energy (ZE)—buildings, or groups of buildings, with greatly reduced energy loads such that, totaled over a year, 100% or more of the energy use can be met with renewable energy generation.” The Department of General Services (DGS) in California [41] issued NZ definition for buildings as “Zero Net Energy Building (ZNEB)—an energy-efficient building where, on a source energy basis, the actual annual consumed energy is less than or equal to the on-site renewable generated energy.”

The existing definitions declared variations, mainly in supply and source requirements. According to ASHRAE [42], a single definition is necessary to determine “if a building can be universally considered as being an NZEB.” Due to the complexity of assessing coefficients, ASHRAE along with the US Green Building Council (USGBC), the American Institute of Architects (AIA), and the Illumination Engineering Society of North America (IESNA) agreed to adapt site energy measures in defining their NZB [42]. ASHRAE defined NZB as “NZEB—as much energy collect from renewable sources as the building uses on an annual basis while maintaining an acceptable level of service and functionality,” where “buildings can exchange energy with the power grid as long as the net energy balance is zero on an annual basis [42].”

NREL [43] introduced electrification as an emerging movement in energy markets globally, and defined it as “the shift from any non-electric source of energy to electricity at the point of final consumption” [44]. EIA [45] presented that most end-uses are electrified with the main exceptions in water heating, space heating, and cooktop, which account for 46% of the total energy use [46]. NREL stated that electrification promotes power production economic enhancements besides mitigating fossil fuel use [43]. The Energy and Environmental Economics [47] evaluated the GHG savings, economics, and gird impacts of electrification in six residential homes in six different climate zones in California and stated that “electrification is found to reduce total greenhouse gas emissions in single-family homes by ~30–60% in 2020, relative to a natural gas-fueled home.”

[48] calculated a detailed model to evaluate the emission impact of electrifying end-uses on the GHG emission reductions in two cases: (1) decarbonizing power production, and (2) Dennis [49] assessed decarbonized electricity supply and recommended incentivizing end-use electrification policies in supporting heat pump technology; promoting the use of renewable sources; and balancing on-site energy demand with supply to minimize CO2emissions. The authors recommended renewable energy for an extra 80% reduction in electricity-related emissions [50]. [51] noted that the long-term cost stability for electrification reduces investment risk compared to the volatile oil and gas prices, shown in Figure 1. 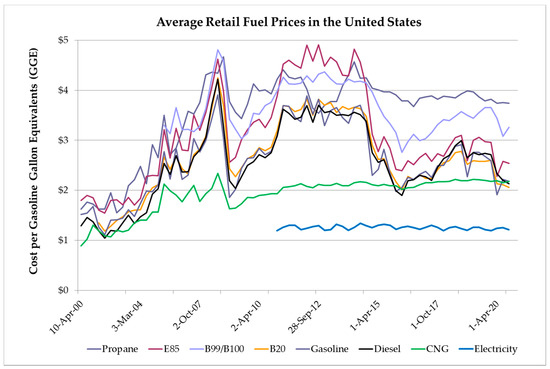 Current debates identify electrifications as the major step in reaching NZ and GHG reduction targets, where building code accounts as a requirement to accomplish this goal [54][55][56][57]. NBI [58] identified pathways to get to NZ goals, including: Zero Energy Construction Code, where projects are required to assure that the submitted building plans are designed to meet the NZ outcome; Zero Carbon Code or Policy, where carbon is considered as the metric and covers two aspects of the policy such as combustion removal at the building level and shift from energy (cost/site/source) to GHG metrics.

The literature on efficient strategies showed a significant impact of electrification and renewables on GHG emission reductions. NBI recommended that building codes need to be upgraded at the national level to include electrification and mandate all new construction to be electric and carbon neutral by local code [54][55][56][57]. The main end-use sectors that have not yet been fully electrified were summarized as space heating, water heating, and cooktop, which are required to be further investigated.