The tongue is able to quickly reflect the state of health or disease of the human body. Tongue inspection is an important diagnostic approach. It is a unique method that allows to explore the pathogenesis of diseases based on the guiding principles of the holistic concept that involves the observation of changes in the lining of the tongue in order to understand the physiological functions and pathological changes of the body. It is a potential method of screening and early detection of cancer.

For thousands of years, doctors have diagnosed a patient’s health by inspecting the tongue, especially the back of the tongue. Inspection of the tongue as a method of clinical diagnosis is a unique feature of Traditional Chinese Medicine (TCM).
The tongue inspection is a procedure that has been reported from the Shang Dynasty (from 1600 BC to 1000 BC) that should be performed by the clinical observation the tongue body to evaluate its morphological and color homogeneity. In accordance to the Traditional Chinese Medicine, the tongue is able to absolve a key role of a biosensor, while the different tongue regions are able to provide information to check the diagnosis the organ systems health [1][2].
In accordance to Traditional Chinese Medicine, “A pathology arises associated to a tongue surface coating appearance. The surface coating represents the exterior manifestation, which corresponds to the sustaining disease, and is the primary indication for the diagnosis making”. In this way, the appropriate knowledge of the molecular aspects of tongue response is a key factor to comprehend this semeiotic medical practice [1][3][4]. Several studies on the microbiology of the healthy human tongue, through the sequencing of 16S rRNA, which is applied for the detection, categorization, and evaluation of the microbic charge within the biological mixtures, have shown that the most abundant phyla are Fusobacteria, Actinobacteria, Firmicutes, Proteobacteria, and Bacteroidetes [1][4][5]. The variation in the microbiota of the tongue lining recorded by metagenomic sequencing identifies potential biomarkers for several diseases, including the precancerous cascade [1][6][7]. The thin white or reddish tongue coating with 0/1 patina is a symbol of good health (Figure 1 and Figure 2), while the “white-fat” and “yellow-dense” coating (Figure 3 and Figure 4) may be an indication of inflammation, infection, and stress, as well as of immune and endocrine disorders (Figure 5) [8][9]. Thick coat and tongue moisture are increased in tumors. The relationships between tongue diagnosis and diseases, including rheumatoid arthritis, gastritis and precancerous lesions, liver, pancreatic, and lung cancer, were explored [1][10][11][12][13][14][15]. Tongue-lining microbiota biomarkers could provide a complement for the diagnosis of several diseases from the noninvasive, individualized, and long-term monitoring aspects [1][16]. Tongue diagnosis is a simple, noninvasive method of assessing physiological conditions by observing the thickness and color of the coating [6]. The tongue coating is categorized into three different classes in accordance to their color typologies: white coating (W), yellow coating (Y), and black and gray coating (Table 1). A yellow coat is considered an indication of water retention and heat [3]. The most common syndromes are the following four: external cold syndrome, internal cold syndrome, external heat syndrome, and internal heat syndrome, and are associated with thin white, thick white, thin yellow, and thick yellow tongue coatings [1]. Cold and hot syndromes are two contrary but internally related conditions [8]. According to the TCM theory, the tongue is an external extension of the spleen and stomach [17][18]. Western medicine refers to the indexes of the thickness of the coat on the back of the tongue, classifying it in four degrees [19] (Table 2). 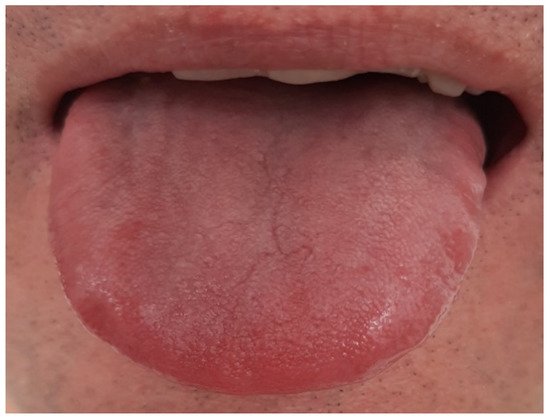 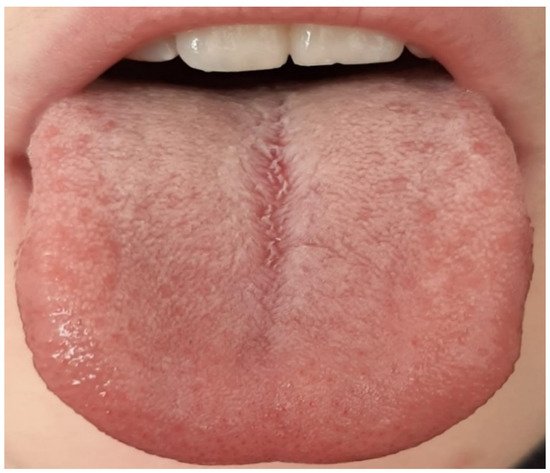 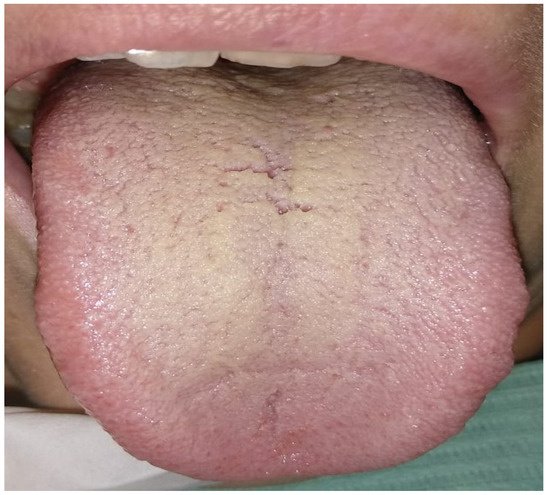 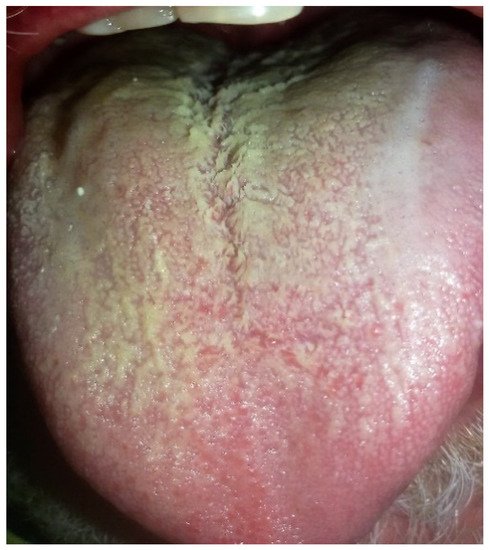 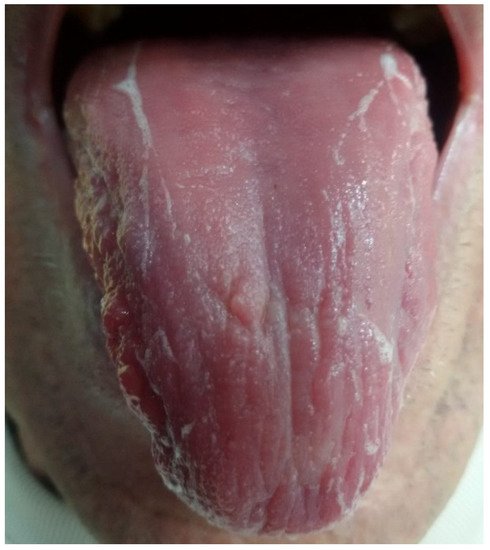 Figure 5. Desquamated coat of tongue related to severe hypovitaminosis.
Table 1. Classification of the lingual patina according to the TCM standard.
standard.
Table 2. Classification of the lingual patina according to the Miyazaki standard.
Several studies have shown that Lautropia was significantly increased in patients with gingivitis, oral lichen planus, and chronic periodontitis [20][21][22][23][24]. The level of Capnocytophaga was higher in the saliva of patients with oral cancer [25][26]. These results indicated that the tongue thin coating (W) is an important reference of the oral microbiota. The salivary Megasphaera was observed more abundant in lung cancer patients, associated to an increased rate of white coated tongue [5], fecal Selenomonas was increased in colon cancer patients, and the data suggested that (W) thick coat may be correlated with the risk of intestinal tumors [1][27][28]. Prevotella has been implicated with periodontal infection [29]. Peri-implant prevotella maculosa was increased in patients with smoking mucositis but decreased in patients with nonsmoking mucositis, indicating that thick coating (W) is associated with periodontal disease [28][29]. As for the yellow tongue coating, few potential microbiota have been observed, particularly opportunistic bacteria [20]. Researchers have shown that the oral microbiota is associated with many diseases, such as pancreatic disease, pediatric inflammatory bowel disease, obesity, coronary heart disease, rheumatoid arthritis, gastrointestinal cancer, liver cirrhosis, cardiovascular disease, and pneumonia. The relationship between the tongue lining microbiome and diagnosis was also reported to be relevant for the differentiation of these syndromes [3][9][10][16][17][30]. The mouth environment represents one of the widest microbial reservoirs, and a large quantity of bacterial species are able to provide a complex and stable community. Mutans streptococci and red complex bacterial group, including Porphyromonas gingivalis, Tannerella forsythia, and Treponema denticola, represent species strongly correlated to a high clinical risk for tooth decay and periodontal pathologies [7][31][32]. In addition, the existence of specific oral bacterial species related to systemic diseases has been reported in recent years [33]. For this reason, oral dysbiosis has attracted attention as an etiology of oral and systemic diseases [34].
After the birth, the oral environment is exposed to a wide variety of microbes, while the human microbiome develops with the organism growth. In this phase, the facultative anaerobic bacterial species such as streptococcus and actinomycetes are considered the pioneering colonizers of the mouth environment, while the Streptococcus salivarius is considered the predominant colonizer species [35]. Although the Firmicutes phylum predominates in both the oral microbiota and the gut, the genus Streptococcus within the Firmicutes phylum is rarely detected in the gut microbiota [36]. Initially, a Streptococcus species predominance is primarily associated to the first phases of the consolidation of the mouth microbiome. It has also been reported that the formation of the oral indigenous microbiota begins within the first 6 weeks of life, and Streptococcus rapidly dominates the oral cavity during this phase [37]. The microbiome quality of the tongue tissues during the transition phase, between 80 and 120 weeks, is more similar to the adults’ microbiota composition. Colonies corresponding to Streptococcus peroris and Streptococcus lactarius decrease exponentially immediately after 30–49 weeks, while Granulicatella Adjacens, Actinomyces odontolyticus, and Fusobacterium periodonticum increase over the same period [38]. A drastic compositional change of the language microbiota occurs before the age of 1 year, so diversity and overall bacterial composition reach levels comparable to those of adults by age 2 [7].
The posterior part of the tongue has a large surface with papillary structures [39], which can retain numerous aerobic and anaerobic microorganisms [40], fungi, metabolites in the blood, saliva, and exfoliated keratinized epithelium. Filiform papillae are a specific structure that involves the formation of the lining of the tongue. This structure causes many cracks and folds that increase the surface of the tongue, and the warm, moist, and nourishing environment provides a suitable medium for colonization, growth, and proliferation of microorganisms [36][41][42][43][44][45][46][47]. The mucous membrane of the tongue accumulates more microbes than other parts of the oral cavity do, boasting a relatively complete and independent microecosystem that can be easily harvested from saliva [48][49]. These features imply that more attention should be paid to the tongue microbiota in older adults susceptible to swallowing problems [50]. An increase in tongue lining in edentulous older adults has been associated with aspiration pneumonia and fever [51][52]. Usually, the detached microbes ingested with the salivary fluids move through the esophagus tract to the stomach region, where they go to be inactivated by the action of the gastric acid and proteolytic enzymes. However, alterations in swallowing with aging allow for aspiration into the lower respiratory tract and subsequent lung infection [53]. Older adults with fewer teeth, poor oral hygiene, and more dental caries consistently experience dysbiosis, with a greater relative abundance of Prevotella, Veillonella, and Streptococcus species and a greater number of fungal species. Particular attention should be paid to the state of the tongue by implementing correct oral hygiene habits with particular attention to the back of the tongue. Specifically, mechanical oral hygiene to lower the oral microbial load is recognized as an effective approach to reduce the death rate from aspiration pneumonia, so much so that in some countries, the figure of the oral health professional is guaranteed as standard assistance for the treatment of the oral cavity hygiene in frail elderly in hospitals and nursing homes [54]. Although aspirated saliva contains microorganisms that colonize various oral sites, the bacterial composition indicates that the dominant source is the tongue microbiota [36][41][55].
Some studies have shown that bacteria implicated in periodontal disease, such as porphyromonas gingivalis, tannerella forsythia, and treponema denticola, are a risk factor for atherosclerotic vascular disease, type 2 diabetes, and nonalcoholic fatty liver disease (Figure 6) [56][57][58]. Furthermore, a repeated oral ingestion of Porphyromonas gingivalis promotes systemic inflammation [59]. 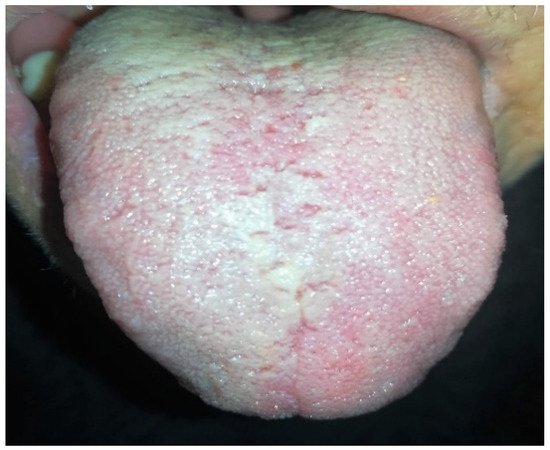 Figure 6. Thick white fatty coat of tongue related to type 2 diabetes, hypertension, and nonalcoholic fatty liver disease.
Since we ingest approximately 600 mL of saliva per day containing up to 109 bacteria/10 mL, it is reasonable to suspect that some oral bacteria induce intestinal microbiota disturbances [60].

The oral cavity represents a key ecosystem for microbial proliferation, while in healthy subjects, the mouth could present over ten billion bacteria. Bacteria are localized in tongue crypts and they could invade into the vascular system through the rich vascularized tissue components of this region [18].
Several studies have suggested a link between the development of the human microbiome and rheumatoid arthritis (RA). Porphyromonas gingivalis appears to be involved in the initiation and progression of RA, supported by the high presence of periodontitis [61][62]. In a case-control study, Ceccarelli F., Orrù G., and Pilloni A. et al. analyzed the presence and quantification of P. gingivalis in a large healthy cohort, and there was a significant association between the percentage of P. gingivalis on the total tongue biofilm and disease activity in patients with RA, suggesting that the microbiological status of the oral cavity could play a role in the mechanisms of inflammation. In this study, the percentage of P. gingivalis on the total language biofilm was analyzed for the first time; using this new measurement, an association was identified between this value and disease activity, new information on the bacterium’s influence on RA. The authors hypothesized that the presence of P. gingivalis can chronically stimulate the immune system, regardless of the presence of periodontitis, leading to a state of chronic systemic inflammation [63].

A small organ such as the tongue can be a very effective visual detector of apparently nonvisible pathologies and can be considered as a potential method of rapid cancer screening and diagnosis.
Many cancers are diagnosed at an advanced stage, mainly because most patients are asymptomatic in the early stage. Diagnose in the early stage could increase the number of curable cancers and improve survival. Evidently, it is necessary to develop new strategies in oral medicine for the early diagnosis of diseases, and the diagnosis of the tongue as a minimally invasive method is certainly one of them.