Gut microbiota derived metabolites can act as a mediator of microbial influence through circulation on various target organs, including the cardiovascular systems. Thus far, scientists have proposed several mechanisms by which dysbiotic gut microbiota contributes to CVD, such as alterations of microbiota-derived metabolite short-chain fatty acids (SCFA), increases of trimethylamine-N-oxide (TMAO), inhibition of nitric oxide (NO), and aberrant activation of the renin-angiotensin system (RAS). A meta-analysis study summarized 19 studies with 19,256 participants and found that individuals with high concentrations of TMAO and its precursors were associated with increased risks of major adverse cardiovascular events and all-cause mortality.

Cardiovascular diseases (CVDs), a cluster of disorders of the heart and blood vessels, are the leading cause of death worldwide [1]. The developmental origins of health and disease (DOHaD) theory posits that exposure to various insults during critical periods in fetal development leads to structural changes and functional adaption, resulting in increased risk of adult diseases, including CVDs [2]. Important support for the DOHaD concept came from epidemiological reports following birth cohorts in severe famines, which demonstrated that malnutrition during gestation induced a cluster of CVD risk factors, such as hypertension, dyslipidemia, obesity, kidney disease, type 2 diabetes, and cardiovascular morbidity in adult offspring [3][4]. –child dyads reported that a better gestational CV health score in the mothers was associated with better CV health in the offspring from ages 10 to 14 years [5].

Emerging evidence supports that gut microbiota may indirectly or directly influence cardiovascular risk [6][7][8]. A meta-analysis study summarized 19 studies with 19,256 participants and found that individuals with high concentrations of TMAO and its precursors were associated with increased risks of major adverse cardiovascular events and all-cause mortality [9]. Maternal nutritional insults have been shown to alter gut microbiota balance, resulting in an increased risk of adult diseases [10]. However, relatively little is known about whether (and how) various early life insults could affect gut microbiota, resulting in CVDs in adult offspring.

Nevertheless, developmental programming, besides determining the risk for CVDs in adulthood, also offers an innovative approach to prevent CVDs by so-called reprogramming [11]. By switching therapy from adulthood to early life before disease occurs, we have the potential to postpone or reduce undesirable programming processes that would lead to CVDs. Over the year, the gut microbiota has gained more attention because, unlike non-modifiable CV risk factors, it can be modified through agents that modulate the intestinal bacterial flora, including prebiotics, probiotics, synbiotics, etc. Accordingly, one may assume that early gut microbiota-targeted therapy may serve as a reprogramming strategy to prevent the developmental origins of CVD.

We searched the PubMed/MEDLINE databases for studies published in English between January 1980 and May 2021, using the following search terms: “cardiovascular disease”, “developmental programming”, “DOHaD”, “reprogramming”, “gut microbiota”, “probiotics”, “prebiotics”, “synbiotics”, “postbiotics”, “mother”, “pregnancy”, “gestation”, “offspring”, “progeny”, “atherosclerosis”, “heart”, “vascular”, “endothelial dysfunction”, “stroke”, “thrombosis”, “aryl hydrocarbon receptor” and “hypertension”. Additional studies were then selected and assessed based on fitting references in eligible papers. However, only approximately 10% belong to the research of DOHaD. Among them, hypertension accounts for nearly 80% of searchable publications.

Additionally, extensive evidence indicates that other early life adverse influences contribute to CVD in later life, including maternal illness, pregnancy complications, medication use in pregnancy, and in utero exposure to environmental pollutants [12][13][14]. Prior research also suggested an association between medication use in pregnant women, such as glucocorticoid [15] and non-steroidal anti-inflammatory drugs [16], and adverse cardiovascular renal outcomes in their progeny. Several other risk factors in early life affecting cardiovascular outcomes in offspring have been reported, such as vitamin D deficiency [17], gestational hypertension [18], short-term breastfeeding [19], and excessively rapid weight gain postnatally [20]. Moreover, early life toxic environmental exposure, such as endocrine-disrupting chemicals, is linked to cardiometabolic traits in childhood [21].

However, epidemiological studies often do not provide information in which a direct cause–effect relationship can be established. Instead, the results from animal models can help one understand which developmental stage is critical for cardiovascular programming, to discover molecular mechanisms underlying the developmental origins of CVD, and to develop novel reprogramming strategies.

3. Implications of Gut Microbiota in the Developmental Origins of CVD

The most common cardiovascular outcome being studied in altered gut microbiota-related animal models is hypertension [22][23][24][25][26][27][28][29][30][33][34][35][36][38][39], followed by endothelial dysfunction [32] and ventricular hypertrophy [39]. Abnormalities in gut microbiota were also related CV risks, such as obesity [31][32][37][39], insulin resistance [31][33], increased lipid profile [33][38], and nonalcoholic fatty liver disease [32][36]. Abnormalities in gut microbial richness and diversity have been linked to a higher risk of developing other CVDs, such as coronary artery disease, cardiomyopathy, and heart failure [40]. However, little information exists regarding the role of gut microbiota in the developmental origins of those CVDs.

AsTable 1illustrates, the rat is the most common species used. The possible reason might be that rat models provide a low-cost option with a short life cycle that is easy to handle [41][42]. Although other species, such as rabbits, sheep, and pigs, are used in DOHaD research [41][42], limited information is provided on using large animals to study gut microbiota and the developmental origins of CVD.

In adulthood, every one month of the rat is equivalent to three human years [ the timing of cardiovascular outcomes determined from 12 weeks to 4 months of age in rats, which corresponds to humans from childhood to early adulthood. Accordingly, knowledge gaps about long-term adverse effects of early life insults on CVD and gut microbiota in older adult offspring remain large. 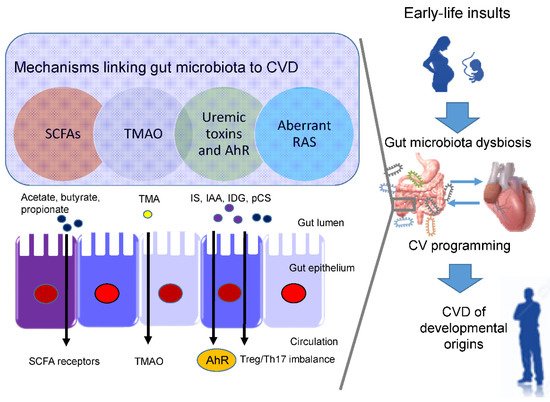 Short chain fatty acids (SCFAs) are formed during bacterial fermentation of carbohydrates in the gut. SCFAs have one to six carbon atoms (C1-C6), mainly consisting of acetate (C2), propionate (C3), and butyrate (C4) [45]. SCFAs are generally known to induce vasodilatation, in favor of antihypertension [45].

In spontaneously hypertensive rats (SHRs), hypertension is related to decreased abundance of acetate- and butyrate-producing bacteria [46]. SCFAs exert their regulation on BP mainly by activating their SCFA receptors, including G protein-coupled receptor 41 (GPR41), 43 (GPR43), 109A (GRP109A), and olfactory receptor 78 (Olfr78) [45]. The Olfr78 is expressed in the renal juxtaglomerular apparatus, where it mediates renin secretion in response to SCFAs to elevate BP [47]. In addition to hypertension, the metabolism of SCFAs is also a factor contributing to obesity [48].

In a maternal minocycline exposure model, minocycline-induced hypertension is associated with decreased plasma levels of acetate and butyrate [27]. Another report demonstrated that maternal garlic oil therapy protects against increases in blood pressure induced by high-fat diets in adult male rat offspring, which coincided with increases of acetate, butyrate, and propionate levels, as well as their producing microorganisms [49]. Additionally, SCFA supplementation in pregnancy and lactation have shown positive benefits on hypertension of developmental origins [23][50]. These findings support the notion that SCFAs and their receptors might be a key mechanism underlying developmental programming of hypertension.

Maternal TMAO administration can induce hypertension in adult male offspring [28]. Conversely, 3,3-dimethyl-1-butanol (DMB, a TMA inhibitor) treatment during pregnancy and lactation protected adult offspring against hypertension programmed by a maternal high-fructose diet, which was associated with the reduction of TMA and TMAO levels [23]. Moreover, perinatal resveratrol therapy prevented maternal CKD-induced hypertension in adult male rat offspring and was associated with a decreased TMAO-to-TMA ratio [26]. These observations suggest a pathogenic association between the TMA-TMAO pathway and the developmental origins of CVD.

One example is TMAO, a cardiovascular risk factor and uremic toxins. Additionally, several tryptophan metabolites are known as gut microbiota-derived uremic toxins, such as indoxyl sulfate Among them, IS and IAA were related to the risk for cardiovascular morbidity and mortality in uremic patients [53]. In CKD, IS can activate monocytes, intensify inflammatory process, augment oxidative stress and impair hemostatic system, all of which are major contributors to the development of CVD [54][55].

Moreover, IAA and several microbial tryptophan catabolites are ligands for aryl AhR [56]. (TH17) axis and triggers inflammation, by which activation of AhR by its ligands is closely associated with the development of CVD [57][58]. An imbalance of T regulatory cells (Treg) and TH17 cells is involved in the development of hypertension [59]. In patients with CKD, Treg/Th17 imbalance has been associated with the pathogenesis of cardiovascular complications [60].

In a maternal CKD-induced hypertension model, maternal tryptophan therapy preventing offspring hypertension was associated with mediation of the AhR signaling pathway [61]. On the other hand, antagonizing AhR signaling by resveratrol has been reported to protect adult offspring against hypertension in several hypertension models of developmental origins [24][62][63]. Prior research demonstrated that IS and AhR both can promote thrombosis [64][65]. As thrombus formation, secondary to atherosclerotic plaque disruption, plays a major role in the development of several CVDs [66], attention will need to be paid to better understand the interplay between AhR and uremic toxins underlying developmental programming of thrombotic-related CVDs.

Within the RAS, regulation is achieved through a cascade of proteases that generate several bioactive peptides [69]. Activation of the classical RAS triggers vasoconstriction and inflammation under pathophysiological conditions, thus promoting hypertension and cardiovascular damage [70]. Emerging evidence suggests that aberrant RAS plays a key role in cardiovascular programming and RAS-based interventions can be used as a reprogramming strategy to prevent DOHaD-related disorders [69]. Treating young offspring with renin inhibitor aliskiren [71], ACE inhibitor captopril [72], or angiotensin receptor blocker (ARB) losartan [73] between 2 and 4 weeks of age was shown to protect against hypertension programmed by various maternal insults in adulthood.

Angiotensin-converting enzyme 2 (ACE2), a homologue of ACE, converts ANG II to ANG-(1–7) Via regulation of intestinal amino acid transport, previous research showed that ACE2 plays a crucial non-catalytic role in gut biology and modulation of gut microbiota [74]. One previous study reported that administration with the ACE2 activator or with ANG-(1–7) during pregnancy could alleviate cardiovascular dysfunction in adult SHR offspring [75]. Another report showed that the antihypertensive effect of probiotics might be due to their ability to produce ACE inhibitory peptides [76].

Since gut microbiome dysbiosis has been connected to CVD by modulating the gut RAS [77], these findings support the notion that the interplay between gut microbiota and the RAS implicates the pathogenesis of cardiovascular programming, although this remains speculative.