The studied mineral was a commercially available natural zeolite, which is named clinoptilolite. This mineral is widely used as desiccant in agriculture and in food preservation because of the low cost, in addition it is used as ion exchanger in aquariology, and as a purifying food supplement in intensive animal farming.

The substance was purchased by T.I.P. (Technische Industrie Produkte GmbH, Germany) and, as shown in Figure 1 (above), it had the aspect of a grey stone with large grain size (the average size was 3cmx5cm). The morphological characterization was carried out by scanning electron microscopy (SEM) on both the as received and powdered materials (see Figure 1, below). 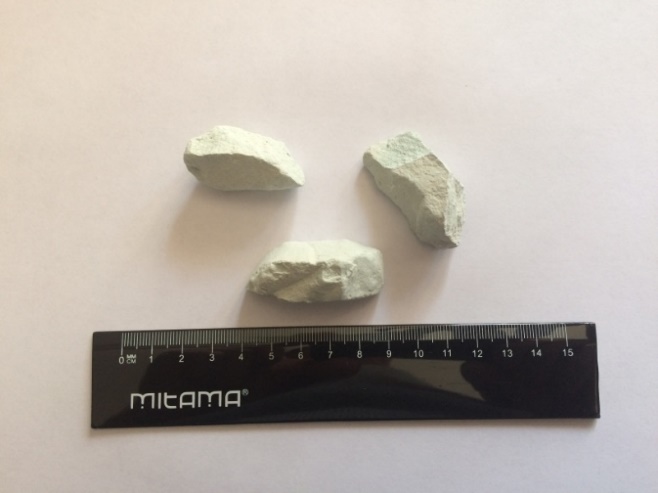 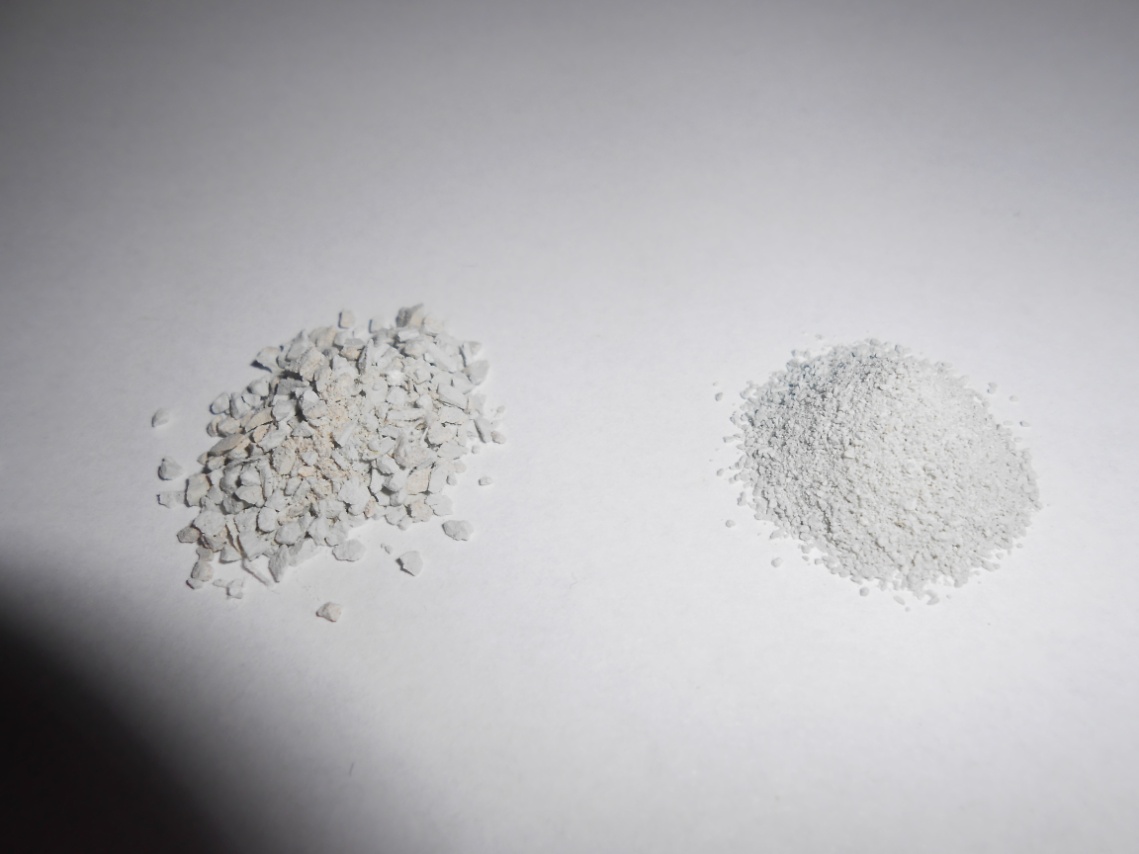 Fig. 1 – Natural zeolite in as received (above) and powered (below) forms.

The mineral was cut in form of thin slabs (1cmx1cmx0.5cm), by using a diamond saw (Electric Mini-Drill, Dremel), and the obtained slab surfaces were first coarsely grinded by sandpaper (n.1) and then polished by the saw diamond tip. Figure 2 shows the type of diamond tips used for cutting and finishing the natural zeolite surface. 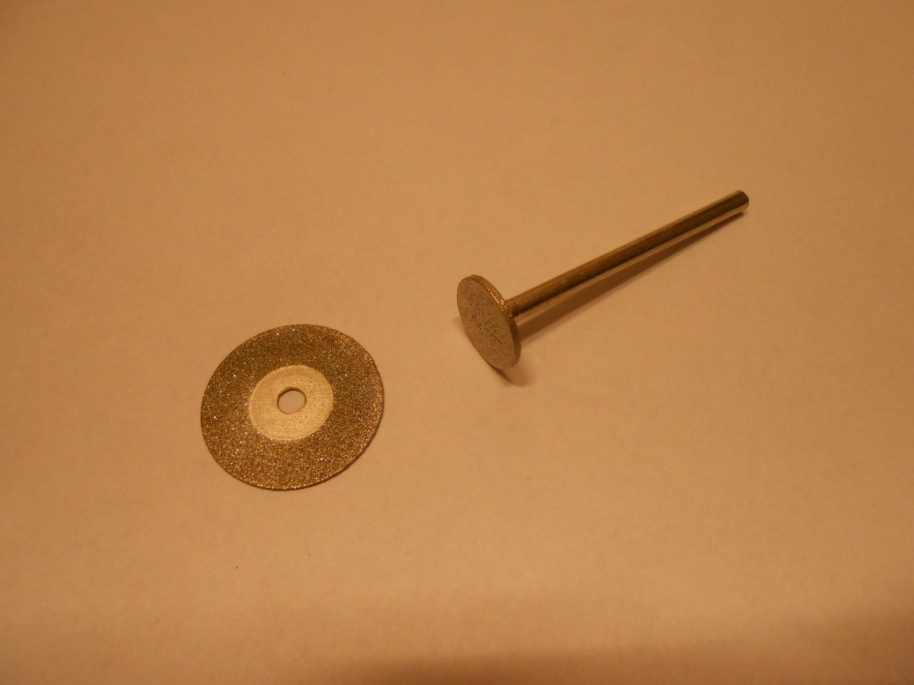 Fig. 2 - Detail of the diamond tips used for cutting and polishing the surface of clinoptilolite slabs.

The clinoptilolite microstructure was investigated by using a scanning electron microscope (SEM, FEI Quanta 200 FEG). Before SEM observation, the clinoptilolite samples were sputtered with Au/Pd alloy by using a high-resolution sputter coater (Emitech, mod. K575X). This surface treatment was required in order to avoid the electrical surface charging of samples during the SEM observation.

Since clinoptilolite samples did not show any chromatic phase contrast (all crystalline phases present in the mineral had the same color), to investigate their surface microstructure, specimens were observed by a Scanning Electron Microscope (SEM). As visible in the SEM-micrograph of Figure 3, the mineral sample showed a quite compact structure, in which occasionally macro-pores (average diameter of 10µm) appeared. 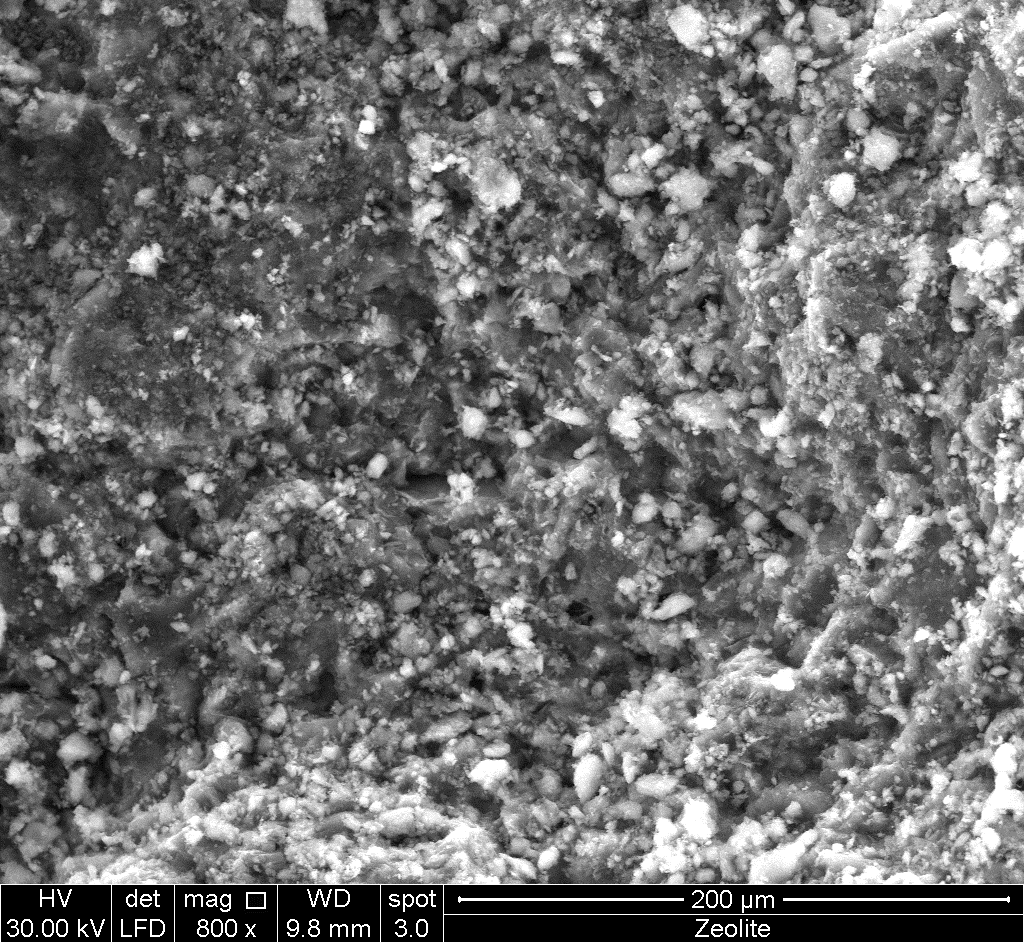 Fig. 3 – SEM-micrograph of the cut and polished surface of the clinoptilolite sample.

Such simplified mineral preparation technique, based on the cutting/polishing of the sample surface, did not allow to clearly visualize the real mineral texture and to evidence the presence of a meso-porosity (i.e., the presence of pores with a diameter ranging between 2 and 50nm[1] ). Therefore, to evidence the mineral texture, clinoptilolite sample was conveniently powdered before SEM observation. In particular, the mineral was mechanically broken by applying a compressive impact stress (a hammer of 300g was used) until a coarse powder was achieved. In order to isolate the thinnest fraction of the powder, which corresponds to the most delaminated mineral fraction, the powder was sieved by a fine-mesh grid (0.7mm). The obtained powder was placed on the surface of an electrically conductive carbon tape, located on an aluminum stub for SEM, and after, Au/Pd sputtering, observed by the SEM microscope. The SEM-micrographs of the mineral, carried out at high magnification (X30,000) are shown in Figure 4. As visible, the clinoptilolite particles have a very finely-grained polycrystalline structure, corresponding to a texture of lamellar type.

In particular, perfectly distinct lamellas (single lamellar crystals) with smooth edges, rich of defects (fractures, etc.), are visible. Lamellas have a nanoscopic thickness (all lamellas have the same thickness, corresponding to ca. 40nm) and the other two sizes of ca. 0.3-1µm (see Table I). Specifically, it is possible to identify a larger dimension (defined as ‘length’), generally falling in the 300nm-1µm range, and a smaller dimension (defined as ‘width’) falling in the 300nm-700nm range. For these lamellas it is possible to define an average stereological diameter corresponding to about 860nm. These single lamellar crystals are stacked in the mineral, face-to-face, giving compact aggregates, with more or less extent inter-granular fractures, originated at the lamellas contact points (largest mineral meso-pores). In particular, the dimensions of the meso-pores present between the lamellas in the form of fractures are ca. 25-50nm. However, the pores can occasionally have a size of ca. 100nm and macro-pores of ca. 500nm could be present among the lamellas blocks.

Tab. I – Average size of the lamellar clinoptilolite crystals. 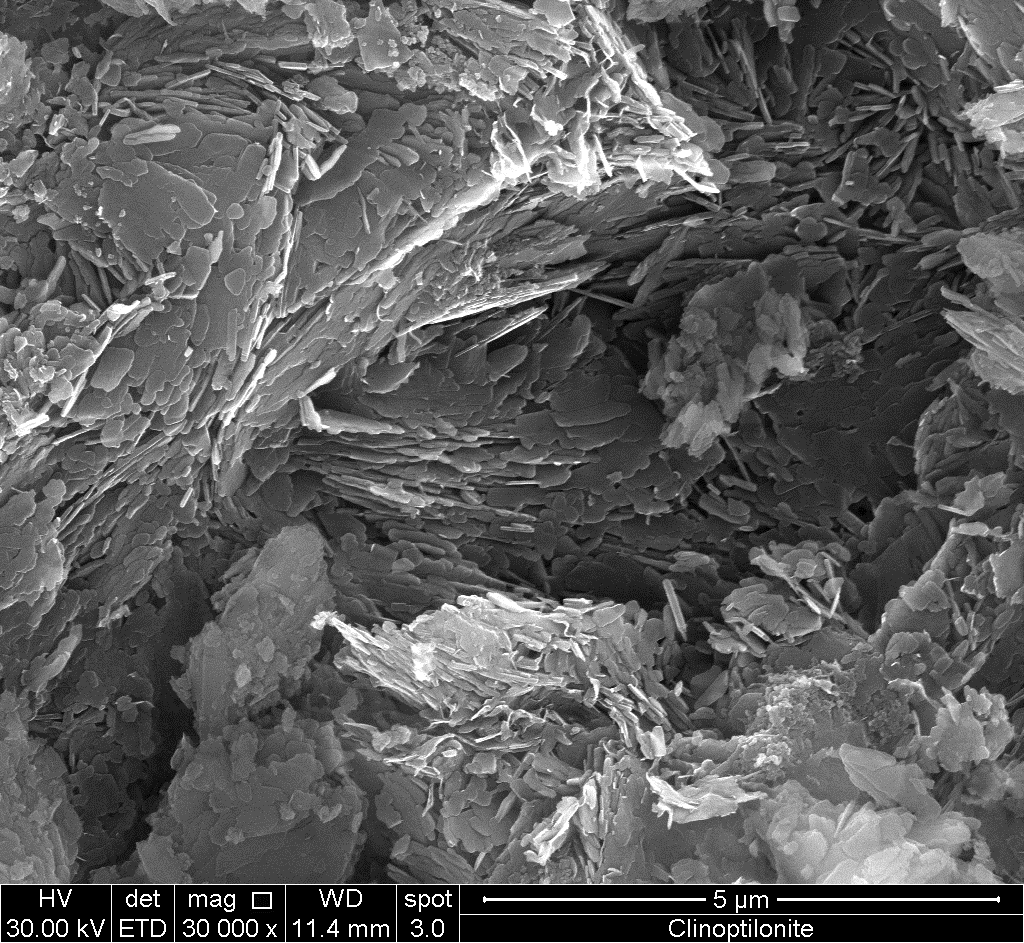 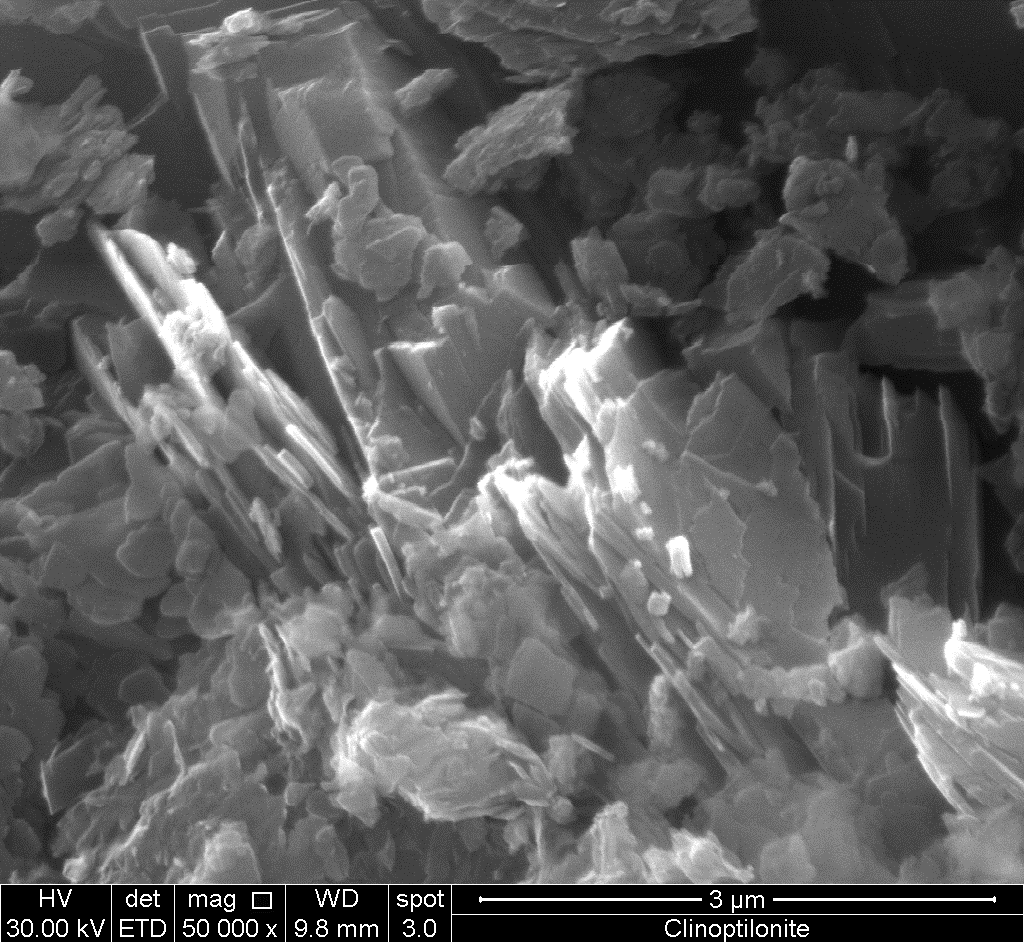 The morphology of the crystalline lamellas, observed by SEM, corresponds exactly to that known for this mineral[2][3][4]. In particular, the planar crystalline grains of the mineral extent in the (010) crystallographic direction and therefore, as shown in Figure 5, the basal planes of the lamella can be indicated by this Miller indices. 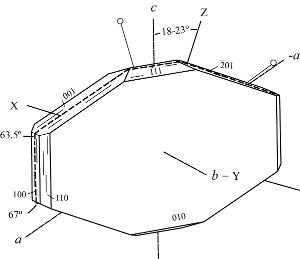 Fig. 5 - Clinoptilolite crystal with indication of the Miller indices for the various faces (left) and detail of the lamellar structure (right).

In conclusion, SEM represents a very powerful morphological investigation tool for a suitably prepared mineral sample. In fact, SEM has an adequate resolution for observing the microstructural features of the material, however the sample must be mechanically grinded in order for allowing to clearly evidence the texture of the mineral, which is a polycrystal with a very thin grain size. This special structure determines the presence of a meso-porosity, corresponding to inter-lamellar space (i.e., space between the adjacent basal and lateral lamella faces). The planar crystals of clinoptilolite, with a basal plane (010), have an average size of 40x500x700nm and the inter-grain fractures, which correspond to the mineral meso-porosity, have an average size of about 25-50nm. This meso-porosity defines most of the mineral physical properties like, for example, its ability to rapidly absorb liquid water by capillarity and water vapor by adsorption in the inter-granular regions.