Insulin in Health and Disease

Insulin is a polypeptide hormone mainly secreted by β cells in the islets of Langerhans of the pancreas. The hormone potentially coordinates with glucagon to modulate blood glucose levels; insulin acts via an anabolic pathway, while glucagon performs catabolic functions. Insulin regulates glucose levels in the bloodstream and induces glucose storage in the liver, muscles, and adipose tissue, resulting in overall weight gain. The modulation of a wide range of physiological processes by insulin makes its synthesis and levels critical in the onset and progression of several chronic diseases. Although clinical and basic research has made significant progress in understanding the role of insulin in several pathophysiological processes, many aspects of these functions have yet to be elucidated. This review provides an update on insulin secretion and regulation, and its physiological roles and functions in different organs and cells, and implications to overall health. We cast light on recent advances in insulin-signaling targeted therapies, the protective effects of insulin signaling activators against disease, and recommendations and directions for future research.

Although the biosynthesis and secretion of insulin are controlled by circulating glucose levels, the concentrations required to initiate the two processes differ [1][2]. While glucose concentrations above 5 mM are required to initiate insulin secretion, fluctuations within 2 mM to 4 mM stimulate its biosynthesis [1]. The metabolism of glucose is triggered by food intake, leading to simultaneously increased β cell insulin production and decreased α cell glucagon secretion to bring serum glucose levels back to normal [2]. Skeletal muscle cells and adipocytes, the other major targets of circulating insulin, also take up glucose, thereby reducing the blood glucose concentration to baseline [3].

To date, the main focus of research has been to investigate the role of insulin in the onset and progression of pathological conditions and chronic diseases, such as diabetes. The literature shows that insulin deficiency makes it impossible for cells to use glucose as an energy source [3]; consequently, high-glucose concentrations in the bloodstream lead to a condition known as hyperglycemia [3]. Prolonged hyperglycemia leads to diabetes mellitus and can cause health complications such as nervous system damage and dysfunction of the eyes and kidneys. Similarly, a cell’s inability to use glucose as an energy source that results from the lack of insulin can trigger reliance on fat stores as the only energy supply.

Recent advances in insulin research have led to insulin-signaling targeted therapies and insulin-signaling activators being used as protective measures against several diseases. Similarly, sulfonylurea, through its activities on enhanced insulin secretion via their actions on pancreatic β cells, augmented insulin secretion [1]. Currently available forms of insulin include insulin mixtures, concentrated insulins, and insulins with alternate routes of administration, providing several options for people living with diabetes. This article provides an updated review of insulin secretion and regulation, its physiological roles in body organs, the health consequences of insulin deficiency, and recent advances in insulin-signaling targeted therapies.

The phosphorylation of glucose by the enzyme glucokinase (GCK) is the first step in glucose metabolism. Glucose phosphorylation by GCK is related to insulin secretion; therefore, GCK gene dysfunction or aberration leads to decreased glucose-mediated insulin release and glucose intolerance or diabetes [8]. A major understanding of insulin secretion is derived from the research using rodent models, whereas few studies have been described in humans [9].

In nondiabetic donors, an increase in glucose concentration from 1 mM to 6 mM raises the rate of glucose oxidation threefold (as determined by measuring the levels of C14O2produced from uniformly C14-labeled glucose), and an approximately 25% acceleration takes place when the concentration of glucose is increased to >12 mM [10]. About one-tenth of the ingested glucose enters into glycolysis, which occurs through mitochondrial oxidation in human islets [10], but the ultimate destination of the rest of the ingested glucose needs to be further elucidated.

largely promote nutrient-induced insulin secretion, and they are highly crucial in the overall physiology of insulin secretion [9][11]. Research has indicated that incretins are capable of binding to G-protein-coupled receptors on β cell membranes and increase cellular 3′,5′-cyclic adenosine monophosphate (cAMP) levels and glucose-stimulated insulin secretion (GSIS) in the presence of higher glucose levels. As a consequence, cAMP induces an upsurge in the size/amount of readily releasable pools in a glucose concentration-dependent manner within insulin granule dynamics. It is worth noting that incretin peaks the activity of the β cells in the presence of active glucose concentrations in a Ca2+-independent manner, even in Ca2+

After being secreted from pancreatic β cells and circulating through the body, insulin binds to insulin receptors (IRs) on target cell membranes. This results in the phosphorylation of insulin receptor substrate (IRS) and the subsequent activation of two primary signaling pathways, viz. the phosphoinositide3-kinase (PI3K)/protein kinase B (Akt) pathway and the mitogen-activated protein kinase (MAPK) pathway (Figure 1). 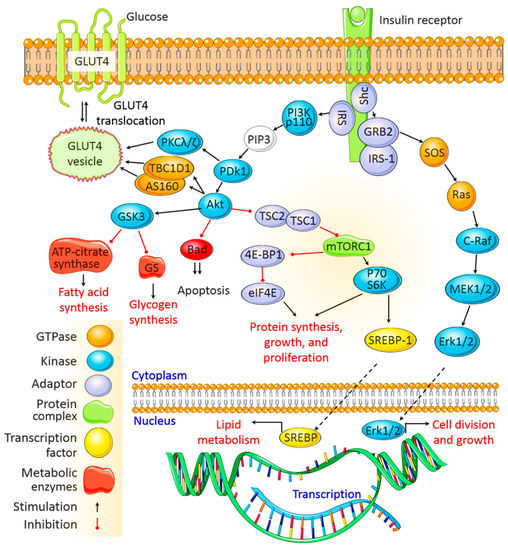 The MAPK pathway is activated when IRS-1 binds to growth factor receptor-bound protein 2 (Grb2). SOS binds to Grb2 and then to Ras, causing GDP –GTP exchange and the activation of Ras.

The major purpose of insulin is to regulate the body’s energy supply by balancing micronutrient levels during the fed state [14]. Insulin is critical for transporting intracellular glucose to insulin-dependent cells/tissues, such as liver, muscle, and adipose tissue. Any imbalance in exogenous energy supplies results in the breakdown of fats stored in adipose tissue and eventually accelerates insulin secretion. In the following sections, we discuss the major role of insulin in regulating several insulin-dependent tissue/organ functions.

Among the many important functions of insulin, nutrient homeostasis, i.e., synthesizing glycogen from glucose and the conversion of excess glucose into fatty acids and precursor triglyceride (TAG), are the most crucial [15]. A search of the literature indicates that insulin upregulates glucose-utilizing activity via accelerated hepatic glucose utilization, glycolysis, and glycogenesis, and it downregulates glucose production by suppressing net glucose production, gluconeogenesis, and glycogenolysis [16]. Directly, it can bind with hepatic insulin receptors and subsequently activates insulin signaling pathways in the liver, which has been demonstrated both in vitro and in vivo experimental models [17][18][19][20]. On the other hand, indirect insulin action is mostly regulated by the reduction in pancreatic glucagon secretion [21], the inhibition of fat lipolysis [22], and the influence of overall hypothalamic insulin signaling [23], which subsequently affects hepatic glucose production.

Insulin performs several important functions in all body parts, and skeletal muscle is no exception. Approximately 70% of the glucose is used by skeletal muscle from the whole-body glucose uptake [24], and the rest is used by the liver through an insulin-dependent mechanism. Postprandial hyperglycemia encourages the pancreas to secrete insulin, and an increase in plasma insulin concentration triggers the uptake and use of glucose by skeletal muscle [25][26][27]. Given that skeletal muscle is a major site for glucose disposal, quantitative declines in muscle volume in patients with type 2 diabetes might adversely affect overall glucose metabolism; thus, insulin therapy could improve optimal glucose targets [28].

Like other parts of the body, the muscle needs a continuous source of energy to work efficiently, and carbohydrates and fats are the main energy sources used by muscle cells to produce ATP [29]. At the same time, insulin stimulates skeletal muscle to take up glucose by activating several enzymes [27] In skeletal muscle control, glucose uptake and energy metabolism increase GLUT4 Insulin also controls the amount of branched-chain amino acids, non-esterified fatty acids, plasma glucose, and muscle mitochondrial ATP production [30].

In some organisms, specialized cells store extra energy in the form of lipids, and in multicellular organisms, adipose tissue is responsible for the lipid storage [31]. Therefore, the biological features of adipose tissue from different sites could play a significant role in the onset and progression of metabolic derangements, particularly in obese individuals. It has been reported that insulin regulates several aspects of adipose cells’ functional development and differentiation [32]. However, further studies are needed to understand the molecular basis of adipose tissue response to insulin as it is highly relevant to the pharmacotherapy of diabetes and weight gain.

The endothelium, which forms the inner layer of blood and lymph vessels, is considered a highly active part of the body involved in several pathophysiological processes, such as leukocyte adhesion, the control of vasomotor tone, inflammation, and barrier function [33]. Insulin is thought to be important for several functions relating to the endothelium, among which endothelium dysfunction is the most discussed [34]. Generally, endothelial dysfunction indicates events such as reduced nitric oxide (NO) bioavailability, increased oxidative stress mediated by elevated reactive oxygen species (ROS) production, the expression of pro-inflammatory and pro-thrombotic factors, and abnormal vasoreactivity [34]. Indeed, an in-depth understanding of insulin’s role in both the physiology and physiology of endothelial cells is essential for developing novel approaches for treating and preventing cardiovascular complications [35].

Initially, the brain was considered insulin insensitive because glucose uptake in this organ is unaffected by insulin [36][37]. However, growing evidence suggested that insulin can increase glucose uptake in the spinal cord tissues and some brain regions, such as the choroid plexus, the pineal gland, and the pituitary [38][39][40]. In addition to glucose metabolism and the energy balance in the brain, insulin is reported to control other vital physiological functions, such as neuronal plasticity, memory processing, and cognition [41][42][43]. Therefore, depending on the evidence described above, insulin plays a very important role in brain function and might be an excellent therapeutic compound for treating both obesity and Alzheimer’s disease, as suggested by other contemporaries [44][45][46].

The initial evidence of insulin actions in the kidney has been suggested in the 1950s [47]. Insulin involves various metabolic processes, including kidney homeostasis [48]. Hyperglycemia is responsible for the development of diabetic kidney diseases (DKDs). Therefore, the progression of kidney diseases, including DKD, could be slowed or reversed by controlling hyperglycemia with insulin therapy [49].

Another important physiological role of insulin is that it promotes bone development [50]. Bone formation may be regulated by insulin signaling through osteoblast development and bone resorption by osteoclasts [50]. In another in vitro study, it has been reported that insulin is an anabolic agent capable of increasing the rate of osteoblast proliferation, collagen synthesis, and alkaline phosphatase production, and it facilitates glucose uptake and subsequently inhibits the activities of osteoclasts [51]. Additionally, insulin-deficient models displayed a decline in mineralized and osteoid surface areas due to altered mineral apposition rates and osteoblast activity [51], and epidemiological investigations have further reinforced this finding.

Therefore, chronic decreases in oxygen and nutrient supplies due to hyperglycemic conditions may lead to follicular damage, which results in the alteration of regular hair growth (e.g., thinning, fragility, sparseness of hair, and decline in hair growth) The corresponding relationship between insulin action and the hair follicle is not fully understood. However, certain skin conditions, such as acrochordon and acne, have been linked with insulin action [52][53]. Another skin disease, psoriasis, is connected to other metabolic diseases, including obesity and metabolic syndrome, and there is a link between psoriasis and IR through the common factor of adipose tissue [54][55].