Ceramide is a bioactive sphingolipid involved in numerous cellular processes. In addition to being the precursor of complex sphingolipids, ceramides can act as second messengers, especially when they are generated at the plasma membrane of cells. Its metabolic dysfunction may lead to or be a consequence of an underlying disease. Recent reports on transcriptomics and electrospray ionization mass spectrometry analysis have demonstrated the variation of specific levels of sphingolipids and enzymes involved in their metabolism in different neurodegenerative diseases. In the present review, we highlight the most relevant discoveries related to ceramide and neurodegeneration, with a special focus on Parkinson's disease.

Parkinson’s Disease (PD) is the second most common neurodegenerative disease [1]. PD affects 1% of the population over 60 years of age, with a higher risk of developing the disease in males [2][3]. The annual economic burden of PD in the European healthcare system per patient ranges from €2600 to €10,000 [4]. The disease presents with symptoms of motor impairment such as bradykinesia, rigidity, tremor, postural instability, and difficulty in speaking and swallowing. As for non-motor symptoms, patients present sleep disturbance, depression, cognitive impairment, sensory abnormalities, or autonomic dysfunction [1][2].
PD is characterized by the accumulation of misfolded α-synuclein (α-syn) in inclusions called Lewy bodies located in the substantia nigra of the central nervous system, resulting in the loss of dopaminergic neurons in substantia nigra pars compacta and striatal dopamine, which are responsible for the motor symptoms of the disease. Lewy bodies have also been found in other areas of the brain such as raphe nuclei, locus coeruleus, brainstem reticular formation, the dorsal motor nucleus of the vagus nerve, amygdala, hippocampus and nucleus basalis of Meynert, to which non-motor symptomatology is attributed [1][2].
As for the mechanisms responsible for PD, neuronal death and neurodegeneration have been linked to oxidative stress, vascular disfunction, tumor progression, altered mitochondrial, autophagy and proteolysis functions, inflammation, excitotoxicity and lysosomal storage disorders (LSD) [2][5]. In addition, it was reported that alterations in sphingolipid metabolism in the early stages of the disease may be linked to an increased risk of developing PD with dementia, while regulating the levels of certain sphingolipids by enzymatic regulation can slow the development of the disease [6].
Sphingolipids are widely distributed in the organism, including the central and peripheral nervous system [7][8]. The closest association of sphingolipids with neurodegenerative diseases was related to their structural function, especially the glycosphingolipids, as the main component of the plasma membrane of oligodendrocytes and myelin [9]. However, several studies have demonstrated the implication of sphingolipids in several key biological processes such as cellular proliferation and migration, differentiation, autophagy, apoptosis, senescence, and inflammation [8][10][11][12][13][14]. Recent works on transcriptomics and electrospray ionization mass spectrometry analysis (sphingolipidomics) have demonstrated the variation of specific levels of sphingolipids and enzymes involved in their metabolism in different neurodegenerative diseases [15][16][17].
Ceramides (Cers) have a dual role in cell biology since they are precursors of complex sphingolipids and second messengers to regulate cell homeostasis [7][8]. Ceramide (Cer) is highly expressed in neurons and modulates neuronal signaling, synaptic transmission, cell metabolism, neuron-glia interaction and cell survival [18][19][20]. The intracellular accumulation of Cer has been noticed as a critical step to neurodegeneration [21]. Neurodegenerative diseases and aging have a direct connection with oxidative stress. The increase in oxidative stress induces stimulation of the sphingomyelinase (SMase) activity and the consequent elevation of intracellular Cer concentration in neurons and oligodendrocytes [21][22]. Furthermore, mutations in different enzymes involved in the metabolism of Cer have been implicated in the development of neurodegenerative diseases. It should be noted that part of lipid metabolism takes place in lysosomal compartments. Thus, it is important to discriminate between lysosomal enzyme alterations, which would be part of LSD and non-lysosomal enzymes [23].

Cers are considered the central hub of sphingolipid metabolism and can regulate key metabolic functions. In particular, Cers are potent inducers of cell cycle arrest and apoptotic cell death [13][24], and are implicated in inflammatory responses related to microbial infection, asthma, cardiovascular diseases or chronic obstructive pulmonary disease (COPD) [25][26]. Moreover, an unbalance of intracellular Cer levels can lead to neurological and neuroinflammatory diseases. Cers are synthesized mainly by three major pathways. Furthermore, Cer can be synthesized by the dephosphorylation of ceramide 1-phosphate (C1P) by ceramide 1-phosphate phosphatase (CPP). In addition to producing Cer, the metabolites of complex sphingolipid catabolism lead to the production of another bioactive molecules, such as sphingosine 1-phosphate (Figure 1). 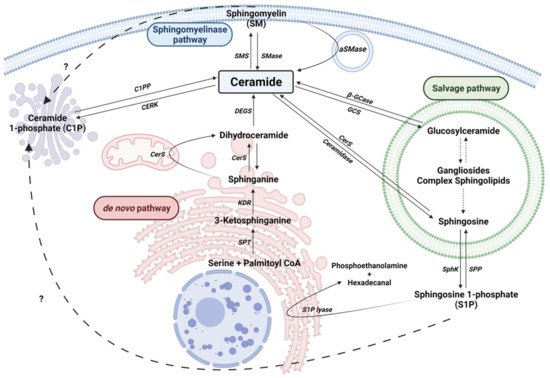 This pathway takes place in the endoplasmic reticulum (ER) where serine palmitoyltransferase (SPT) catalyzes the condensation of palmitate and serine to form 3-ketosphinganine (also called 3-ketodehydrosphingosine). Recent structural studies on SPT revealed a symmetrical dimer protein anchored to the ER membrane by six α-helices. The complex is formed by a single molecule of SPTLC1, SPTLC2, ssSPTa/b (two small subunits that enhance enzyme activity and also specify acyl-CoA substrate) and four regulatory subunits, ORMDLs (homologs of the yeast and plant Orms) [27]. Then, 3-keto-dihydrosphingosine reductase (KDR) produces sphinganine. Ceramide synthase (CerS) can then catalyze the formation of dihydroceramide (dhCer) through the incorporation of acyl-CoA of different chain lengths to sphinganine. There are six different isoforms of CerS (CerS1-6) identified in mammals and plants [28]. Specifically, CerS1 is highly expressed in the nervous system and skeletal muscles, but is almost undetectable in other types of tissue. CerS1 mainly generates 18 carbon chain Cer (C18-Cer), whereas CerS2 produces C22/24-Cer, CerS3 produces C26-Cer, CerS4 generates C18/20-Cer, CerS5 synthesizes C14/16-Cer and CerS6 forms C14/16-Cer. Cers with different acyl chain lengths have been detected in the mitochondria of the brain [29][30]. Furthermore, in brain tissue, CerS1, CerS2 and CerS6 enzymes were localized to the inner and outer mitochondrial membrane, and can induce the synthesis of C18-Cer, C22-Cer and C16-Cer, respectively [31]. Interestingly, mitochondrial CerS was associated with mitochondrial injury in cerebral ischemia/reperfusion with increased production of Cer [31]. The last step of this pathway is catalyzed by a dihydroceramide desaturase (DEGS), which introduces a double bond in position 4-5 trans of dhCer. DEGS is localized to the cytosolic leaflet of the ER membrane. In particular, genetic manipulation of the DEGS gene by tissue-specific deletion reduced hepatic steatosis and attenuated insulin resistance [32]. DEGS polymorphisms have been associated with the develop of cognitive impairment in schizophrenia [33]. Recently, DEGS mutation has been described to produce hypomyelination and degeneration of both central and peripheral nervous systems [34].

SMases are enzymes that hydrolyze sphingomyelin (SM) at the plasma membrane of cells to generate Cer and phosphocholine. SM hydrolysis is considered a fast mechanism for the production of Cer. There are five different types of SMases [35], and these have been classified according to their ion dependence, location and optimal pH. These include lysosomal and plasma membrane acid SMase (aSMase) [36], endoplasmic reticulum/nucleus and plasma membrane neutral Mg2+-dependent and neutral Mg2+-independent SMase (nSMase) [37], alkaline SMase (alkSMase), which is present in the intestinal tract and human bile [35][38], and a Zn2+-dependent secreted form of aSMase [39]. Meanwhile, aSMase and nSMase are implicated in cellular signaling, whereas alkSMase is implicated in the degradation of SM incorporated in the diet. It should be noted that aSMase and nSMase increase their activity by the action of pro-inflammatory stimuli, such as Tumor Necrosis Factor α (TNF-α), Interleukin-1β (IL-1β) or cytosolic phospholipase A2 (cPLA2), and it leads to elevation of intracellular Cer concentrations [40][41][42][43]. In addition, these enzymes are activated by some anticancer drugs, and by irradiation of cells with ultraviolet (UV) or ionizing radiation [44]. Mutations in the aSMase (SMPD1) gene results in disfunction of cholesterol and lipids metabolism, leading to Niemann-Pick’s disease [45][46].
There are different nSMase isoforms that have been characterized under different experimental settings [47]. The nSMase1 isoform (SPMD2 gene) is expressed in all cell types and highly enriched in the kidney. The nSMase2 isoform (SPMD3 gene) has a different domain structure than nSMase1. Contrary to nSMase 2, nSMase1 has two transmembrane domains, and instead has one collagen-like domain and two hydrophobic domains [48]. Of interest, nSMase2 is highly expressed in brain tissue [49]. Lastly, nSMase3 (SMPD4 gene) is ubiquitously expressed in all cell types. All of these SMase isoforms are Mg2+-dependent for expression of their activity. Dysregulation or stimulation of nSMase activity has been related to PD, Alzheimer’s disease, cognitive dysfunction or cerebral ischemia recovery [47][48][50][51][52].

This pathway involves a series of catabolic reactions that result in degradation of complex sphingolipids in acidic compartments, such as lysosomes. Complex sphingolipids, such as gangliosides (GM1, GM2 or GM3) or globosides, can be degraded to Lactosyl-ceramide (LacCer) by different reactions. Then, LacCer can be converted to Glucosyl-Ceramide (GlcCer) by LacCer hydrolase. Acid β-glucosidase 1 (β-GCase), encoded by GBA1 gene, converts GlcCer to lysosomal Cer. Deficiencies or dysfunction of this enzyme can lead to the accumulation of GlcCer and the development of the lysosomal storage disease known as Gaucher’s disease. Moreover, mutations in the GBA1 gene with loss of function have been linked to PD [53][54]. Contrarily, glucosylceramide synthase (GCS) transforms Cer into GlcCer. Once generated, Cer can be converted to sphingosine (Sph) by ceramidases. These enzymes differ in their optimal pH. There are three alkaline ceramidases (ACER1, ACER2 and ACER3), an acidic ceramidase (ASAH1) and a neutral ceramidase (ASAH2) [55][56]. ASAH1 is ubiquitously expressed in lysosomal compartments while ASAH2 is localized in plasma membranes, and mainly expressed in the small intestine and colon [55]. Sph is released to the cytosol and transformed to Cer by the activity of CerS in ER.

Another relevant enzyme is Ceramide kinase (CerK), which phosphorylates Cer to produce Ceramide 1-phosphate (C1P). C1P is a key regulator of cell proliferation, survival and inflammation. The signaling pathways involved in C1P actions include mitogen-activated protein kinase kinase (MEK)/extracellularly regulated kinases (ERKs) 1/2, the mammalian target of rapamycin (mTOR), phosphatidylinositol 3-kinase (PI3K)/Akt, or protein kinase C-α [57][58][59], c-Jun N-terminal kinase (JNK) [60], or stimulation of vascular endothelial cell growth factor (VEGF) secretion [61]. Additionally, C1P-promoted cell survival implicates upregulation of inducible nitric oxide synthase (iNOS) expression [62], direct inhibition of aSMase [63][64] or SPT [65] and activation of the PI3K/Akt pathway [66]. It should be noted that C1P is implicated in the regulation of autophagy [67].
Sph that is released from the lysosomes to the cytosol in the Salvage pathway can be phosphorylated by sphingosine kinase (SK) to form S1P. It is one of the most studied sphingolipids. S1P has been described as a potent regulator of inflammatory processes through its union with specific membrane receptors. Thus far, five S1P receptors (S1PR1-5) have been described [68]. It is worth highlighting its involvement in glia activation processes, ischemic stroke and inflammatory processes in the vascular endothelium [69][70][71].
Dephosphorylation of S1P to Sph is due to the activity of S1P phosphatase (SPP) or by lipid phosphate phosphatase (LPP) activity [13]. However, S1P can be catalyzed by S1P lyase to produce hexadecenal and phosphoethanolamine in ER [72]. Of interest, it was observed, in both in vitro and in vivo models with a lack of S1P lyase an accumulation of β-amyloid and α-syn, promoting dysfunction of neuronal autophagy. In addition, the treatment with phosphoethanolamine restored autophagy, decreasing the deposits of β-amyloid and α-syn [73].