Subjects: Others
View times: 26
Submitted by:

The Life Cycle Assessment (LCA) as an environmental-impact assessment method is gaining increasing attention all over the world due to the urgent need for the preservation and sustainability of the environment. The systematic analysis of the different impacts along the entire life cycle makes possible the identification of potential environmental tradeoffs between stages [1]. This makes the LCA approach different from other assessment methods, such as the water footprint (WF) and the carbon footprint (CF), whose focus is only on a single environmental aspect.

Korea has a humid continental and subtropical climate, comprising four different seasons (spring, summer, autumn and winter) with heavy precipitation and hot and humid temperatures (exceeding 30 °C) in the summer months, and extremely cold temperatures (dropping as low as −20 °C) in the winter months. South Korea also produced more than 553 terawatt hours (TWh) of gross electricity in 2017, based on estimations by the Korea Energy Economics Institute [2].Two-thirds of this electricity generation is accounted for by fossil fuel sources, with almost one-third being accounted for by nuclear sources. As environmental concerns increase, the need for environmental data management also increases. Hence, in an effort to curtail environmental challenges, the Korean government over time has encouraged sustainable environmental and economic research in all scientific fields through the increased funding of Research and Development (R&D) projects (Figure 2).

Several reviews exist which assess the availability of LCA studies in different countries, e.g., New Zealand [3], Sweden [4], Austria [5], Portugal [6], Brazil [7], Ghana, Ivory Coast and Nigeria [8]; and continent, e.g., Africa [9]. These studies primarily focused on the quantification of available life cycle studies, in order to determine the state of sustainability reporting and identify possible research gaps. While it is known that environmental research in Korea has developed over the years, and researchers in Korea have applied the LCA techniques in several sectors since the mid-1990s [10], the extent of reporting of such Korea-related LCA information is not evident. Hence, this paper focused on a bibliometric review of LCAs conducted in South Korea in the last 20 years, with a view to quantitatively summarizing and comparing the development process of LCA research in the country, as well as identifying possible future research areas.

The methodology of [3] was employed with slight modifications in the search and classification of studies. A typical non-academic search was initially performed via Google and Google scholar search engines. This was followed by an academic search via the Scopus and Web of Science (WOS) bibliographic databases. These two search strategies were employed with the assumption that all literatures available will be incorporated. Since South Korea is a non-English speaking country, it was expected that Korean-language published documents might have been available. Nonetheless, these documents were not included in this review, as LCA practitioners from the international scene may not have access to them and as such may not reliably represent a measure of LCA information from the country. In addition, the study included reports specific to activities within South Korea only.

Furthermore, this study focused on the availability of environmental Life Cycle Assessments. Other assessment studies, such as Social Life Cycle Assessments (S-LCA), which involve assessing the social and sociological aspect of a product with respect to its positive and negative impact along the life cycle, as well as life cycle costing (LCC), involving the estimation of how much money is spent on an asset in the course of its useful life, were out of the scope of this study and were thus not included. The authors would also point out that in the course of the search, reports treating only carbon and water footprints were discovered but were not included in this study; they are attached as Supplementary Materials Tables S1 and S2. The Global Reporting Initiative (GRI) sustainability report (year 2017) for South Korea (available at: [11]) was also taken into consideration. This was to ascertain the level of sectorial environmental assessment reporting from the country.

The analysis conducted yielded 91 Life Cycle Assessment studies for South Korea. This is the highest number recorded, when compared with available related studies from other countries, implying a high level of LCA awareness in the country (Table 1). It was observed that the quality of search results reduced after the first three pages of google search after which the likelihood of having repeated studies presented by different web platforms increased. Based on search results, four articles were discovered for years between 2000 and 2004, sixteen were discovered between 2005 and 2009, twenty between 2010 and 2014, and fifty-one between 2015 and 2019. It can be observed that, even though the number of studies has not followed a constant pace over the years, LCA studies have received significant recognition and have been on the rise (Figure 1). This is evident from the fact that a majority of the research studies were conducted by Korean researchers in Korean research institutions within the country. 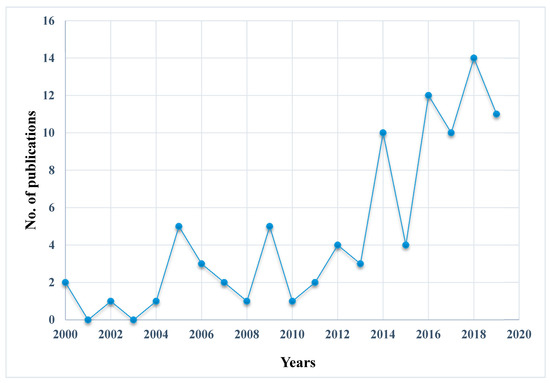 Based on the sectorial contribution to LCA research, the construction sector, with the third-highest contribution to the GDP, had the most LCAs available with forty-three studies. This is understandable, since Korea has mechanized several of its public works over the years, thereby consuming about 40% of total industrial energy consumption and generating large amounts of environmental emissions especially from construction sites and equipment [12], which have led to strong demands for studies on environmentally friendly construction procedures and materials. In addition, a majority of the contributions were from academic sources, especially from Hanyang University, Konkuk University, and Seoul National University; there were some contributions also from industrial sources, such as LG Electronics, Samsung Electronics, Kia Motors Corp., and Super-Tall Building Global R and BD Centre. While Table 2 provides a summary of South Korea’s Sustainability GRI reports, Table 3 provides a brief description of each LCA study. Important information concerning each research article such as the product, sector, impact categories, important findings (results), and references is provided.

Based on GRI sustainability reporting, the database search produced 67 reports from a number of diverse industries within South Korea (Table 2). The search included all reporting criteria of GRI-1, GRI-2, GRI-3, GRI-4, non-GRI, GRI-standards, and GRI-cited [11]. Fifty-eight of these reports were GRI-G4, five were GRI-standards, three were non-GRI, and one was GRI-cited. With respect to sector, the financial industry recorded the highest number with 11 reports. This was followed by the construction industry, with eight; the energy and automotive industries with five each; the chemicals, equipment, non-profit/services, other, and technology hardware industries with four each; the telecommunications industry with three; the conglomerates, healthcare products, and household and personal products industries with two each; and the aviation, construction materials, consumer durables, food and beverage products, logistics, public agency, railroad, textiles and apparel, and tourism/leisure industries each having only one report. The GRI report indicates the significant existence of similar environmental analysis on several sectors of the Korean economy.

This study sought to assess the status of life-cycle assessment studies pertaining to South Korea. The LCA is a rapidly developing technique of quantitative environmental assessment in South Korea, with an increasing number of reports published especially in English language over the years, as observed from the study. Korea as a major world GHG emitter has been a major campaigner for environmental sustainability research, explaining the increasing number of studies over time in the areas of LCA, carbon, water, and ecological footprints. While there is a possibility of missing some studies due to language or search restrictions applied, the study has revealed, through the GRI report, that there exists a large number of environmental sustainability reports in the country, and gives an insight into the areas of concentration as far as Korean LCA studies are concerned.