Pancreatic cancer is an aggressive malignancy and the seventh leading cause of global cancer deaths in industrialised countries. More than 80% of patients suffer from significant weight loss at diagnosis and over time tend to develop severe cachexia. A major cause of weight loss is malnutrition. Patients may experience pancreatic exocrine insufficiency (PEI) before diagnosis, during nonsurgical treatment, and/or following surgery. PEI is difficult to diagnose because testing is cumbersome. Consequently, PEI is often detected clinically, especially in non-specialised centres, and treated empirically.

Pancreatic cancer (PC) is an aggressive malignancy and the seventh leading cause of global cancer deaths in industrialised countries [1], the third most common cause of cancer death in the United States [2], and the fourth most common cancer death in Italy [3]. It is expected to become the second most common cancer death by 2030 [4]. The five-year survival rate remains at a mere 9%, as patients with pancreatic cancer seldom exhibit symptoms until reaching an advanced stage of the disease [1]. Despite advancements in disease detection and management, more than 80% of patients receive a diagnosis in the advanced stage of the disease [5]. A similar number of patients suffer from significant weight loss at diagnosis, which can result in severe cachexia [6]. A major cause of weight loss is malnutrition. As shown in Figure 1, both intrinsic (tumour cell-triggered) and extrinsic (host-triggered) factors contribute to malnutrition in PC patients. Tumour cell-triggered factors include: (i) The Warburg effect, characterised by an increased lactate production as a consequence of glycolysis rather than oxidative phosphorylation of glucose, which results in acidosis. This, in turn, leads to an acid-mediated tumour invasion and the impairment of mitochondrial functions in cancer cells, (ii) the production of tumour-specific factors such as islet amyloid polypeptide (IAPP), which contributes to cachexia and the loss of appetite, and (iii) the location of the tumour itself, most often in the head of the pancreas, resulting in the reduction of the secretion of pancreatic enzymes during meals [6]. The latter is referred to as pancreatic exocrine insufficiency (PEI), leading to maldigestion and secondary malnutrition. PEI can also be a consequence of surgery, for instance due to the reduction of glandular tissue following pancreatic resection [7]. Hence, patients may experience PEI before diagnosis, during nonsurgical treatment, and/or following surgery [8]. 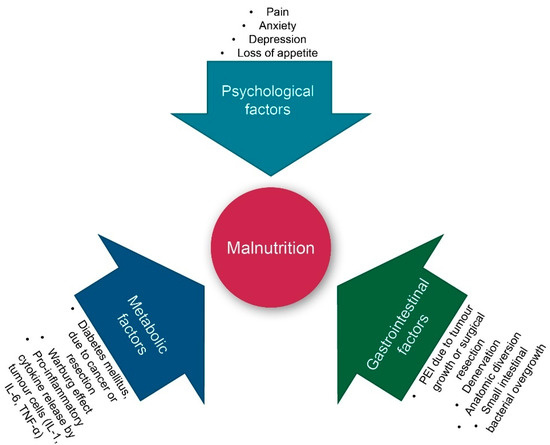 Figure 1. Factors contributing to malnutrition in pancreatic cancer patients. IL: interleukin; PEI: pancreatic exocrine insufficiency; and TNF-α: tumour necrosis factor alpha. Warburg effect: See the text for an explanation.
The impact of PEI and malnutrition cannot be underestimated. Malnutrition can lead to skeletal muscle wasting and fat degradation, longer hospital stays, and increased risk for complications. It reduces the response to the treatment and the patient’s well-being, while increasing the risk of morbidity and mortality in operated and non-operated patients [9][10]. Hence, it is clear that nutritional support is important in patients suffering from PC. The standard treatment for PEI is oral pancreatic enzyme replacement therapy (PERT). Despite the importance of treating PEI and malnutrition in PC patients, studies suggest that treatment is sub-optimal in more than half of patients [11]. One of the reasons for this might be that the nutritional support differs depending on the type of patient: Patients with unresectable pancreatic cancer who undergo the best supportive care may need different nutritional support than patients with locally advanced/borderline resectable (LA/BR) pancreatic cancer during neoadjuvant therapy, while resected patients may have their own specific needs [12].

A considerable number of resected cancer patients develop PEI. The severity of post-surgical PEI depends on the underlying disease, the preoperative pancreatic function, and the extent of the resection [13]. The management of PC relies on a combination of surgery and CT. The latter can be given before (neoadjuvant) and/or after (adjuvant) surgery. According to the location and extent of the disease, pancreaticoduodenectomy (PD) and distal pancreatectomy (DP) are the most frequently performed surgical procedures. Patients undergoing PD for PC developed PEI in 64–100% of cases, whereas this percentage decreased to 0–42% after DP [14][15][16][17]. Total pancreatectomy (TP) is a less frequent procedure, mainly performed in the presence of advanced PC (especially when requiring arterial resection) [18] or in the presence of PC associated with a intraductal papillary mucinous neoplasm. As expected, 100% of patients submitted to TP developed a severe endocrine and exocrine pancreatic insufficiency.
The presence of PEI should be evaluated at the time of diagnosis, particularly in those patients with borderline resectable pancreatic cancer who are candidates for NACT. PERT is helpful to improve their nutritional and general health status, thus enabling these patients to undergo NACT and subsequently major surgery [19][20]. The pancreatic exocrine function should also be evaluated after surgery and eventually supplemented with PERT to ensure proper postoperative recovery, allowing the patient to undergo adjuvant CT.
Objective diagnosis of PEI after pancreatic resection is difficult as the available pancreatic function tests are not accurate or need further validation in this particular setting. FE-1, which is the most common test used in clinical practice, appeared to be unreliable in these patients [15]. The validity of another test, the 13C-labeled mixed triglyceride breath test, is still a matter of debate, as it needs further validation [21]. Hence, a straightforward approach for PEI diagnosis after pancreatic surgery is lacking. Therefore, PERT treatment should not only start when a test diagnoses PEI, but also when there is clinical suspicion of PEI (steatorrhea, weight loss and maldigestion-related symptoms). In this case, the improvement of symptoms and nutritional markers after an empiric therapeutic trial with PERT can be a substitute for an official diagnosis of PEI [20]. Asymptomatic patients with an abnormally high daily faecal fat excretion are also candidates for PERT, as they are at high risk of developing nutritional deficits [22]. Finally, all the patients who are candidates for PD should be considered at high risk for PEI, regardless of the underlying disease. Patients with PC should be regarded as patients with an even higher risk, as this malignancy is frequently associated with obstructive chronic pancreatitis and fibrosis/atrophy of the parenchyma, which are risk factors for PEI development by themselves. Therefore, it has been suggested to give PERT to all patients submitted to PD for PC, especially those who will undergo adjuvant CT [23][13].
The difficulty to diagnose PEI in resected patients can have severe consequences: PEI can remain unnoticed or is under-diagnosed, with patients not receiving the right dosage of PERT [11]. In the end, this will result in weight loss, frailty, and the inability to recover from major surgery or to tolerate CT [19]. Dose titration and monitoring should be considered on an individual basis in the long term. Dose optimisation of PERT is necessary for effective management of PEI, in addition to the regular evaluation of nutritional status, appropriate patient education, and reassessment whenever symptoms return [24].
PERT with pancrelipase in the form of delayed-release capsules containing enteric-coated minimicrospheres is the cornerstone in the treatment of PEI following pancreatic surgery [25][26]. PERT has been reported to be associated with a significant improvement of fat and protein digestion compared to the placebo in patients submitted to pancreatic resection. Moreover, PERT also improved the clinical manifestations of PEI and QoL [14][27].
Recently, a possible role of PEI in survival has been reported in the setting of major pancreatic surgery followed by adjuvant CT [19]. This is not surprising, as untreated PEI, resulting in malnutrition and frailty, may lead to decreased survival [20]. Finally, PERT is generally well-tolerated at the high doses administered, it has a relatively low cost, and it can be delivered by non-specialists in the community.

The available formulations contain pancreatic enzymes encapsulated in microgranules or minimicrospheres with a pH sensitive coating. This coating prevents the release and the subsequent inactivation of the enzymes by gastric acid and promotes the release of the enzymes into the intestinal lumen where the pH is higher and optimal for the digestion and absorption of food [13].
The initial recommended dose of pancreatic extract is 40,000–50,000 U.Ph.Eur of lipase per meal and 25,000 U.Ph.Eur per snack. The dose should be increased until the steatorrhea is sufficiently reduced [28][29]. When this is achieved, the dosage should be maintained. The patients should be educated to modify the quantity of pancreatic extracts themselves to resolve the steatorrhea, as a third–half of patients will require individualised treatment [30]. In the case of an unsatisfactory response, the amount of lipase can be increased by ±20,000 U.Ph.Eur during meals, even though the data do not show that an increased dose is associated with an increased effectiveness of pancreatic extracts [30].

Food intake should be distributed, if possible, between three main meals per day (breakfast, lunch, and dinner), and two or three snacks. The pancreatic extracts should be ingested during the meals, rather than before or after the meal. The caloric intake should not be restricted [13].
A diet rich in fibre is contraindicated, as the fibrous material can interfere with proteolytic and amylolytic enzyme activity; lipolytic activity is affected the most [31]. Enzymes contained in gastroprotected minimicrospheres can be consumed with food, having a pH < 5.5. Acid-suppressing agents should only be taken by patients who continue to experience symptoms of maldigestion despite the adequate administration of PERT [32] or in the presence of other upper gastrointestinal symptoms [33].

Steatorrhea in severe pancreatic insufficiency is very difficult to resolve completely. Only a 60–70% reduction is usually achieved using PERT [34] because of the numerous interactions between pancreatic maldigestion, intestinal ecology, and intestinal inflammation. Fat-soluble vitamins and micronutrients, such as zinc and selenium, should be routinely assessed and administered whenever necessary [35].

Crushing, chewing or holding the pancreatic extract capsules in the mouth may cause local irritation. The extracts should only be administered without gelatinous capsule to patients with gastrectomy [13].

PEI is a hallmark of PC, although its prevalence and severity depends on a number of factors, such as the location of the tumour (tumours in the head of the pancreas are associated with a higher prevalence of PEI than tumours in the body/tail) and the type of surgery the patient undergoes in the case of resectable PC (patients undergoing PD for PC develop PEI in 64–100% of cases, whereas this percentage decreases to 0–42% after DP) [16]. However, in common clinical practice, PEI is frequently not detected and appropriate PERT is underused (21.7% in a UK population-based study [19]).
With this position paper, we aimed to increase the awareness on the importance of PEI and malnutrition in all groups of PC patients, ranging from unresectable and metastatic patients, to locally advanced and borderline patients, and to resectable patients. As a consequence of PEI, these patients often face severe weight loss and cachexia, resulting in frailty that excludes them from undergoing surgery or CT, a decreased QoL and even a shorter OS. Therefore, we recommend that every physician treating PC patients, being an oncologist, surgeon, or gastroenterologist, should look for signs of malnutrition, and in the case of suspicion, refer the patient to a clinical nutrition specialist to implement prophylactic nutritional monitoring and/or counselling. During counselling, patients should be guided into self-management of PERT, in order to learn how to optimise PERT to their needs and their diet.
In addition to creating awareness, we wanted to provide practical information on malnutrition, PEI and PERT. A pragmatic approach to test and treat patients with pancreatic cancer is provided in Figure 2. In Table 1, we summarise the major key points of each chapter.