Regular exercise is associated with pronounced health benefits. The molecular processes involved in physiological adaptations to exercise are best understood in skeletal muscle. Enhanced mitochondrial functions in muscle are central to exercise-induced adaptations. However, regular exercise also benefits the brain and is a major protective factor against neurodegenerative diseases, such as the most common age-related form of dementia, Alzheimer’s disease, or the most common neurodegenerative motor disorder, Parkinson’s disease.

Currently no treatment strategies that modify the disease course of AD or PD exist, and symptomatic treatments are limited, in particular for AD. Lifestyle factors, notably including physical activity and exercise, however, are major factors in modulating the risk of developing these neurodegenerative diseases [1][2][3]. Exercise is defined as planned, structured, and repetitive physical activity that is performed with the objective to improve or maintain physical fitness [4]. An important aspect of both general physical activity and exercise is the activation and training of skeletal muscles, which is associated with enhanced mitochondrial function. Regular endurance exercise improves cardiorespiratory fitness and skeletal muscle function and has well-documented health effects, including reduced all-cause mortality [5]. It furthermore importantly influences mitochondrial health [6][7].

The brain has high energy requirements for which it mostly relies on oxidative energy metabolism [8]. It therefore critically depends on continuous adequate oxygen and substrate supplies. Mitochondrial oxidative phosphorylation (OXPHOS) is the most important energy-providing process in the brain. OXPHOS consists of the electron transport system (mitochondrial complexes I–IV) that establishes a proton gradient across the inner mitochondrial membrane. The resulting mitochondrial membrane potential is used by the second OXPHOS component, the phosphorylation system, to generate and transport ATP. Dysfunction of distinct complexes of the respiratory chain traditionally have been linked to different neurodegenerative diseases. Thus, for example complex I dysfunction has been attributed a prominent role in PD pathogenesis [9], complex IV in AD [9], and complex II in Huntington’s disease [10][11].

Supraphysiological high mitochondrial ROS levels result in the oxidative damage of multiple biomolecules, such as DNA, lipids, and proteins. This impairs cellular processes, such as the maintenance of membrane potential, trans-membrane transport, proteostasis, and enzyme activities, and is also implicated in the pathogenesis of many diseases [12][13]. Oxidative stress is a core mechanism in neurodegenerative disease pathogenesis [14]. This is reflected, for example, by increased levels of oxidative modifications in the substantia nigra of PD patients [15] and oxidative stress as an early pathological process in AD [16].

Mitochondria are integrally involved in the control of cellular survival. One important mechanism mediating this control is the mitochondrial membrane potential that regulates mitochondrial import and export and, upon deterioration, can trigger mitochondrial cell death signalling [25] and induce mitophagy, apoptosis, or necrosis. While the clearance of damaged or senescent cells is important to maintain a healthy cellular environment and to limit mitochondrial damage signalling, too much cell death is obviously detrimental. Neurons are in general vulnerable to imbalances in cell death signalling based on their postmitotic nature that renders them difficult to replace; this vulnerability increases with age, and certain neuronal populations are more vulnerable than others [26], which is likely an important factor in the pathogenesis of neurodegenerative diseases.

The prominent health effects of regular exercise are well established and include reduced all-cause morbidity and mortality [5]. With regard to mitochondria, exercise benefits are best understood in skeletal muscle. While muscle mitochondria regulate skeletal muscle mass and function [27], they are in turn regulated by exercise. Exercise induces mitochondrial plasticity [17][28][29] and improves mitochondrial biogenesis and respiration. It also enhances antioxidant capacities and the affinity of mitochondria for oxygen [17][30][31][32][33][34], improving fatty acid oxidation, aerobic performance, health [35][36][37][38], and healthy aging [39]. These mechanisms crucially depend on the mitochondrial integrity and quality control, as well as on the mitochondria’s capacity to adequately change their morphology, increase their numbers, and enhance their mobility and distribution throughout cells.

Hormetic adaptations are thought to be important mediators of exercise-induced mitochondrial benefits [40]. “Hormesis” is a biphasic response to a stimulus (here exercise), which results in protective adaptations at low levels but that can be detrimental at high doses. It is termed “mitohormesis” if mitochondrial adaptations are concerned. Hormesis following exercise has been suggested to promote healthy brain aging [41].

Muscle mitochondrial ATP production has been shown to decrease by around 8% per 10 years of higher age in a population of 146 healthy men and women of ages between 18 and 89 years [42]. This deterioration of mitochondrial function was attributed mainly to physical inactivity [43], suggesting that regular exercise may at least partially prevent the aging-related decline of mitochondrial function. While acute exercise induces the formation of ROS, with oxidative damage occurring more frequently during high intensity bouts [44], regular moderate exercise reduces oxidative stress by bolstering the antioxidant defences of muscle tissue [12][45][46][47]. Accordingly, aging-related deficiencies in antioxidant capacities can be mitigated by life-long regular exercise [45].

In summary, regular exercise has the capacity to improve both mitochondrial structure and function in skeletal muscle: the main effects are summarized in Figure 1. 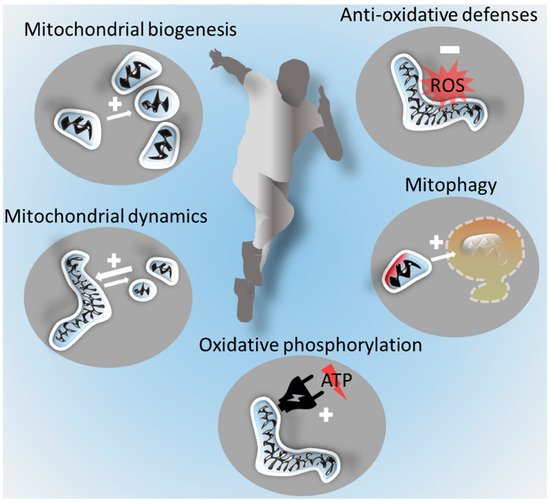 4. Exercise Effects on the Brain: A Focus on Mitochondria and Oxidative Stress

The brain is well known to be responsive to regular exercise. Pronounced structural changes have recently been confirmed by the demonstration of differential brain volumes depending on exercise levels [48]. The associated aerobic fitness is further correlated with reduced brain tissue loss [49][50] and with cognitive benefits [51] during the aging process. Accordingly, exercise has emerged as an important protective factor for neurodegenerative diseases, such as AD [1] and PD [2][52].

The vulnerability of the brain to energy deficits, oxidative stress, and dysregulated cell-death signalling becomes even more pronounced with advancing age, when the occurrence of mitochondrial dysfunction, oxidative damage, and impaired molecular waste disposal increases [53]. Unsurprisingly, age is thus a central risk factor for the development of sporadic neurodegenerative diseases [54]. While potentially attenuated at a higher age [17], the beneficial effects of mitochondrial adaptations to exercise occur throughout life [55].
An obvious benefit of physical activity and exercise with respect to neurodegenerative diseases is the reduction of cardiovascular risk factors [56]. However, the brain can also benefit from exercise and improved muscle function in ways that suggest a direct muscle–brain crosstalk [57][58], and we hypothesize that mitochondria are central in this crosstalk.

Although many open questions remain on the mechanistic details of the exercise-induced benefits on brain mitochondria, the potential of exercise to prevent neurodegeneration is immense. Regular exercise improves brain function, including the cognitive function [59] and hormonal activity [60] of the brain. A direct outcome of exercise—improved cardiorespiratory fitness—has been shown to protect from neurodegeneration risk factors by enhancing, for example, resilience against disruptions of CBF [61]. High cardiorespiratory fitness is also associated with reduced cognitive dysfunction in older individuals [62]. A challenge for the clinical application of exercise as a medicine is the selection of the appropriate exercise regimen, depending both on the capacities of the patients or at-risk populations and the aim. Training plans to this end should be designed with the assistance of sports science specialists [63] in order to both maximize health-promoting effects (selection of adequate exercise parameters) and exclude any risks arising, e.g., from pre-existing morbidities or exercise loads that are too high for an individual.

The WHO guidelines “Global Recommendations on Physical Activity for Health” and the recommendations from the American College of Sport Medicine (ACSM) both propose at least 150 min per week of moderate intensity (endurance) or 75 min of vigorous physical exercise (e.g., intense interval exercise) or an equivalent combination for health benefits in older adults [64][65]. Strength and balance exercise on three or more days per week is recommended for people to maintain force and to prevent falls.

Taken together, performing different types of exercises exerts specific effects on skeletal muscle mitochondria and affects performance differentially. Although this is an important characteristic to harness physical exercise as a treatment for neurological diseases, the effects of specific exercise parameters on brain and brain mitochondria are still poorly understood. Increasing the complexity of the field, the contributions of mitochondria in different brain cell types (neurons, glial cells, endothelial cells, etc.) to the beneficial effects of different exercise modalities remain to be better explored.