Escherichia coli (EHEC) and Shigella dysenteriae serotype 1 are enterohemorrhagic bacteria that induce hemorrhagic colitis. This, in turn, may result in potentially lethal complications, such as hemolytic uremic syndrome (HUS), which is characterized by thrombocytopenia, acute renal failure, and neurological abnormalities. Both species of bacteria produce Shiga toxins (Stxs), a phage-encoded exotoxin inhibiting protein synthesis in host cells that are primarily responsible for bacterial virulence.

Numerous supportive public health measures have led people to erroneously believe that epidemics of many bacterial infectious diseases are no longer a serious health risk. However, Shiga-toxin-producing Escherichia coli (STEC) still poses a threat to public health. Shiga toxin (Stx) is prototypically synthesized by the bacterium Shigella dysenteriae serotype 1, with genetically and structurally related toxin variants produced by certain serotypes of E. coli, including enterohaemorrhagic strains of E. coli (EHEC) [1]. Bacillary dysentery due to infection by Stx-producing bacteria, characterized by acute infectious diarrhea, primarily affects children aged <5 years [2]. Endemic bacillary dysentery occurs globally, including in portions of Africa, Southeast Asia, and the Indian subcontinent, with an estimated 2–7 per 1000 children per year requiring clinical care and 164,300 deaths per year attributable to shigellosis [3]. By contrast, STEC-associated illnesses in young children are more prevalent in developed countries, in which residents consume higher levels of beef and beef products [4][5]. Major outbreaks of diarrheal diseases caused by EHEC may be due to the ingestion of foods such as uncooked meat, unpasteurized milk, water contaminated with these bacteria, and by the contamination of foods used in the preparation of fast-food [6]. Perhaps the largest outbreak of hemorrhagic colitis was caused by an O157 infection in and around Sakai City, Japan, in 1996, which resulted in approximately 1000 hospitalizations among 7000 infected cases [7]. Many non-O157 STEC serotypes have been increasingly reported, and a massive outbreak caused by the hybrid STEC/enteroaggregative E. coli (EAEC) O104:H4 strain occurred in northern Germany from May to June 2011 [8]. More recently, 439 outbreaks and 5 deaths caused by EHEC-contaminated romaine lettuce were reported in multiple states of the United States in 2018 [9].
Stx-producing bacteria have received substantial attention as emergent pathogens due to the dangerous toxins they produce. These exotoxins are the principal virulence factors associated with the pathogenesis of bloody diarrheal diseases, bacillary dysentery, and hemorrhagic colitis progressing to acute renal failure in infected patients, primarily in children. This phenomenon, collectively referred to as hemolytic uremic syndrome (HUS), is the leading cause of pediatric acute renal failure in many countries, including countries in the European Union and the United States [10][11]. Both Stxs and the inflammatory innate immune cells activated by these toxins contribute to the pathogenesis of HUS by rendering blood vessels in the colon, kidney, and central nervous system (CNS) more sensitive to the detrimental action of Stxs. Studies in animals found that treatment with purified Stxs induces intestinal and renal epithelial and endothelial cells to express neutrophil and monocyte chemoattractants. This, in turn, induces the infiltration of peripheral blood mononuclear cells (PBMCs) into the lamina propria and kidneys [12][13]. These findings suggest that the infiltration of inflammatory cells into sites of toxin-induced damage causes the localized expression of cytokines, which in turn facilitate vascular damage via immunopathological reactions.
Studies on Stxs-induced host signaling pathways have indicated that these toxins, which act as multifunctional bacterial proteins, promote ribotoxic stress, apoptosis, endoplasmic reticulum (ER) stress, inflammatory responses, and autophagy in host cells [14]. In addition to the toxigenic and immunopathological potential of Stxs in patients, these toxins interact with multiple cell types in vitro and are responsible for the pathogenic characteristics of HUS in animal models. Although the Stxs-mediated pathogenesis of HUS is not fully understood, comprehensive knowledge of the role of Stxs in altering the composition (also referred to as ‘dysbiosis’) of the intestinal microbiota in a host infected with EHEC compared with a healthy control must be used to help identify the host factors or the commensal microbial-derived products that exacerbate tissue damage or protect against intoxication caused by toxin-producing bacteria. Studies have evaluated the precise correlations between Stx-mediated pathogenesis and intestinal indigenous commensal microbes.

2. Effects of Probiotics on STEC and Stxs in the Gut

E. coli is mainly found in the intestinal cecum and colon of mammals and resides in the mucosal layer, from which it moves into the intestinal lumen and is excreted into the feces. Pathogenic E. coli-mediated diseases, such as food poisoning, intestinal tissue damage, and particularly bloody diarrhea in young children, are major concerns in public health and medical expense-related economic problems worldwide. More importantly, certain strains of STEC in the gut may cause severe extraintestinal or extrarenal illnesses in humans. Certain Gb3-expressing cell types in the gut, such as Paneth cells, may serve as portals for ingress of Stxs. Several epidemiological studies have shown that infection with STEC isolates expressing Stx2a is more pathogenic than infection with strains producing Stx1a or Stx1a+Stx2a [4][15][16]. Infection with strains producing Stx2a may lead to extraintestinal complications, although the cause of the latter is likely to be multi-factorial and can include the constitutive regulation of stx gene expression; antibiotic usage during the prodromal diarrheal phase, inducing the phage-mediated lytic cycle; the presence or absence of additional E. coli virulence factors; and variations in host responses to toxins, which all contribute to the outcome of infection. Moreover, stx genes are carried in the genomes of temperate phages [17][18], located in the late gene region downstream of the late promoters and upstream of the lysis cassette, highly expressed upon activation of phage-mediated lytic cycle and the toxin subunits assembled in the periplasm are secreted by the lytic cycle [19]. Therefore, antibiotics are not recommended for patients with HUS because they activate the phage-mediated lytic cycle in STEC [20] that lyses bacterial host cells to release Stxs and free phage particles that can infect other bacteria and transduce stx genes [21][22][23][24][25][26]. Given that antibiotic therapy is not indicated for these reasons, besides numerous therapeutic approaches utilizing Stxs-specific neutralizing antibodies, toxin receptor analogs, and vaccinations [27], studies have attempted to increase the population of intestinal microbiota that can inhibit STEC colonization and/or Stx expression (Table 1, Figure 1), thereby limiting HUS development. 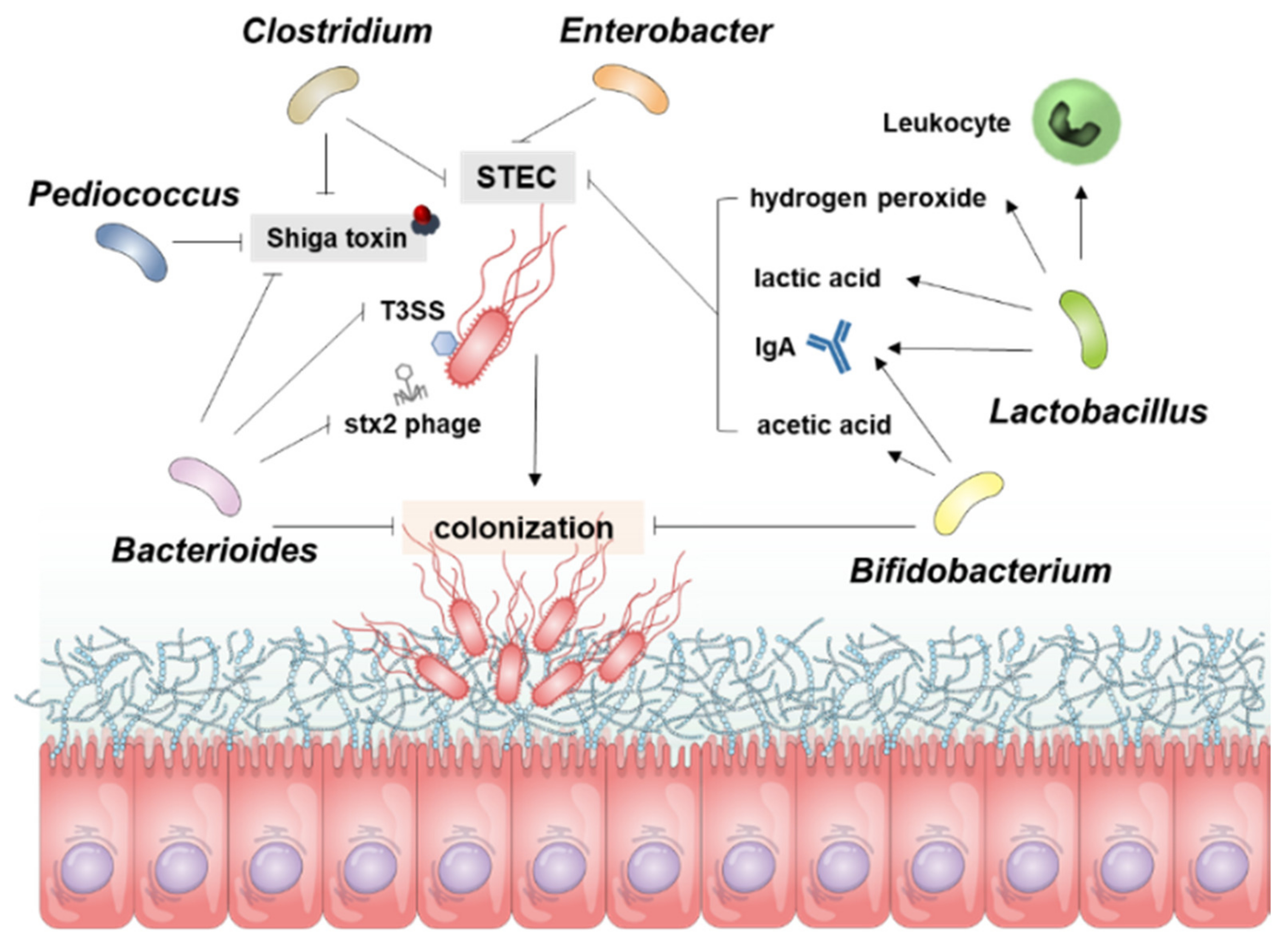 Figure 1. Overview for the Resistance Mechanism of gut microbiota to STEC Infection. The resistance of microbial guns to control STEC works in several ways, and the diagram shows the role of each bacterium in STEC. Bacterioides inhibit Stx production, control direct bacteria and inhibit the colonization of STEC. Bifidobacterium also inhibits STEC colonization and controls STEC proliferation through acetic acid and IgA. Lactobacillus is involved in inhibiting STEC proliferation through the production of hydrogen peroxide, lactic acid, IgA, and leukocyte activity. Pediococcus, Clostridium, and Enterobacter are involved in inhibiting STEC proliferation or controlling Stx production.
Table 1. Abilities of probiotics to regulate Stx production and STEC virulence.

Attempts to identify Stxs-induced risk factors in host cellular responses have revealed that these toxins have a wide range of novel properties that are associated with pathogenesis. Although studies have described Stx-induced signaling pathways that are associated with tissue damage, inflammation, and complement activation resulting from the immunopathological responses to these bacterial toxins, many details on the interfaces between STEC and commensal microbiota (Figure 1) remain to be determined. In particular, no coherent mechanism to date has defined the targets for intervention in HUS disease progression that might explain the dynamic immune modulation, or the mediators of inflammation associated with Stxs interacting with commensal gut microbiota. Additional studies are needed to better understand the intricate pathophysiology involving Stxs-associated bacterial communities in the gut. The precise mechanism by which changes of intestinal microbiota in response to EHEC Stxs may enhance host defense or exacerbate multi-organ damage warrants further investigation. These studies may help to identify potential targets for the disruption of innate immune responses or the protection of primary organs from damage induced by Stx1a and Stx2a.