There are reported types of hearing loss includes noise-induced, genetic, sudden, ototoxicity, and age-related hearing loss. The application of exosomes for prevention or treatment can be classified according to the type of hearing loss, suggesting that they may help restore abnormalities in chemical and biological mechanism. The fundamental recovery of inner hair cells by exosome is difficult, because both noise-induced and sudden hearing loss occur due to physical stimulation of hair cell death.

To allow overexpression of useful candidate factors with usually low expression levels in exosomes, a transporter capable of transferring the factors to MVB is required; furthermore, a technology for developing differentiated exosomes, in which the expressed stem cell exosomes can directly target specific receptor cells is being developed [1][2]. Biocompatibility of these exosomes can be demonstrated by mimicking molecular biological signaling mechanisms [3], and through the discovery of additional biomarkers, stem cell-derived exosomes can be applied not only for differentiation, antioxidation, and immunity, but also to regenerative medicine [1][2]. The fundamental recovery of inner hair cells by exosome is difficult, because both noise-induced and sudden hearing loss occur due to physical stimulation of hair cell death. In addition, the application of exosomes for prevention and treatment for hearing restoration is difficult because genetic hearing loss is caused by developmental disorders in the embryonic period.

Numerous researchers have reported applied studies using exosomes extracted from cultured media [4][5][6]. From a biological point of view, most studies have attempted to repair damaged tissues by exosomes treatment, which can be obtained from cell cultures and biofluids (blood, urine, etc.) [7][8][9]. In addition, the extracted exosomes can decrease inflammatory molecules in the infected cells, thereby increasing cell viability [10][11].

Various exosome isolation methods have been proposed to introduce exosomes directly into the cells or injured tissues (Figure 1b(i)). 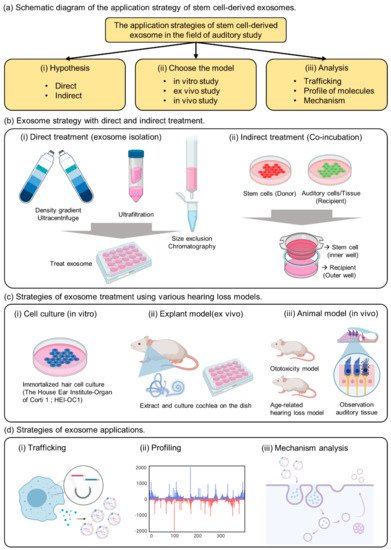 The most common method includes fractionation of the sample with an ultracentrifuge and purification using a sucrose or iodixanol gradient [5][9][12]. Several studies have reported ultrafiltration methods to remove the impurities other than exosomes, to enrich the exosomes [4][7][11]. In addition, to maintain the function of exosomes after isolation, the exosomes must be resuspended in phosphate-buffered saline for use in cell or animal experiments. Exosomes obtained from cell culture fluids or biological samples have low stability and must be stored frozen at -80 °C or used immediately.

As previously reported, exosomes are vesicles composed of lipid membranes that are 100 to 200 nm in size; therefore, they have the property of being able to penetrate small-sized membranes [13][1][14]. Known to play an important role in cell-to-cell communication, useful factors can be divided into donor and recipient cells, and can be used to confirm delivery to the recipient cells [15][16][17]. As a strategy to confirm the effect of indirect exosomes, we propose a co-culture method (Figure 1b(ii)). This method can be used to determine the indirect effects of exosomes while delivering useful elements to the interior of the recipient cell.

The important point of this strategy is the composition of membranes and pore size when choosing the trans-well. If the pore size is 3 µm above the cell size, it would be impossible to move several cells at the same time; therefore, one should select a pore size below 0.4 µm [15][16]. When donor cells are attached to the insertion well, the recipient cells are cultured in the outer well, and when the insertion well is cultured together after 24 h, communication between the cells through exosomes is activated in the medium. Therefore, choosing co-culture as a method of confirming indirect effects without extracting exosomes from donor cells can be an important strategy to elucidate evidence for exosome transport.

There are not many known auditory cells, but House Ear Institute-Organ of Corti 1 (HEI-OC1) has been mainly reported in in vitro experiments (Figure 1c(i)) Although it is possible to analyze the properties of a specific drug according to the purpose of the experiment, caution must be exercised because the physiological properties of these cells are different from those of conventional primary cells or cancer cells. Although ion channels located on the surface of auditory cells can be analyzed, hearing cannot be determined [18][19]. Therefore, we suggest that HEI-OC1 may be a useful model for investigating biological responses related to auditory cells, including auditory sensory cells, but we believe that a careful approach is needed when evaluating drug effects.

Although many researchers have attempted to study hearing in vitro, analytical techniques have been developed only for short-term biological analysis [20][21]. Ex vivo models include extraction of the animal’s auditory organ, the cochlea, and culturing it in a medium similar to that of in vitro experiments.

The human cochlea is difficult to obtain, but the use of mouse cochlea has been reported in previous studies [22]. In a previous study, we conducted experiments to confirm the viability of cochlear hair cells and to evaluate the activity of the special markers Myo7a and phalloidin [23]. The technique of extracting explants can be observed with immunofluorescence, and changes in the surface morphology of the tissue can be observed with transmission electron microscopy. Therefore, cochlear explants are a good tool to quickly screen for toxicity rates based on drug concentration and can be used prior to in vivo testing.

The most important aspect of auditory clinical studies is that animal testing is indispensable, and it is necessary to confirm the phenotype by measuring auditory brainstem response (ABR) to reliably prove hearing loss The type of animal model can represent an age-related or ototoxic hearing loss model [10][24][25][26]. Physiological analysis of auditory cells is possible through in vitro experiments (Figure 1c(iii)), but it is difficult to find a treatment for hearing loss or clearly analyze the efficacy of the drug. Demonstrating the phenotype of toxic substances in vitro and in vivo, we can confirm that hearing loss is a systemic action of the drug in animals.

To observe the anatomical phenotype of hearing loss, the morphology can be observed either through immune fluorescence staining (Figure 2a) or electron microscopy (Figure 2b). The observation of changes in hair cells in the organ of Cotri is evidence of direct damage to the auditory organ, and the Myo7a staining, a representative hair cell marker, may prove a physical phenomenon of hearing abnormalities. In addition, in chemical hearing, it can be confirmed that there is an abnormality in electrochemical transmission by comparing the dB reduction trend through ABR measurement (Figure 2c). 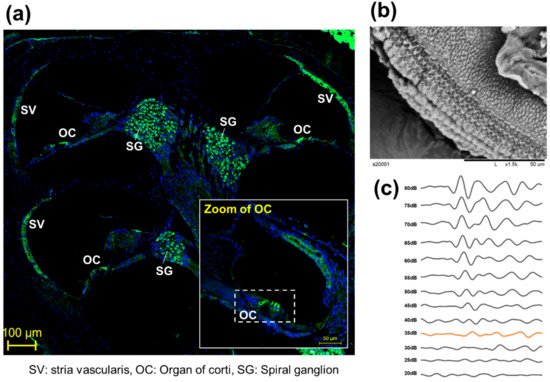 Figure 2. Representative anatomical analysis strategy for in vivo experiments. (a) Analysis of whole auditory organ by immune fluorescence staining using Myosin 7a (Myo7a). (Myo7a: green, DAPI: blue), (b) Observation of organ of corti (OC) by transmission electron microscopy [8], (c) Comparison of hearing kinetics depending on 80 db to 20 dB on 8000 kHz.

EV studies reported over the past decade have demonstrated that EVs retain their activity and carry several types of macromolecules as they are transferred from parent cells to recipient cells [13][27][28]. Previous studies have confirmed that stem cells with embedded nanoparticles can increase exosome production [29]. This demonstrates the possibility of using tube particles to transport specialized proteins to nanoparticles that could influence exosome development. In addition, a previous study reported direct engineering of a fluorescent substance into exosomes to confirm trafficking in human cells (Figure 1d(i))

Therefore, understanding the pathways leading to exosome development and internalization within target cells is an important goal in the current field of EV research. In addition, studies that uncover the unique biomolecules of exosomes are related to disease states and treatments; therefore, the discovery of new EV biomarkers is also a potential research topic.

Next, the presence of DNA molecules in EVs has been widely reported [30][31]. Mitochondria and genomic DNA were found in EVs derived from double-stranded DNA, and those isolated from cell culture media and biological fluids (human and mouse) were found inside EVs (Figure 1d(ii)).

Finally, there is increasing interest in miRNA studies, which are known to be the main causes of gene and protein expression, and there are reports that the miRNA profile of the released exosomes cannot be randomly generated under certain immune response conditions. Proteins inherent in EVs include a complex set of proteins derived from parent cells (cytoplasmic, nuclear, mitochondrial, and membrane-bound proteins). Several proteomic studies have determined EV activity by defining unique EV properties associated with parent cells. Vesicle-specific proteins are often used as markers for specific heat shock proteins, tetraspanins (CD9, CD63, and CD81), major histocompatibility complex molecules, and proteins in the endosomal sorting complex required for transport (ESCRT) complex (Alix and TSG101)

Exosome viability is regulated by the MVB, which redirects endocytosis proteins to their destinations (such as cells or organs) (Figure 1d(iii)). Substances are internalized by endocytosis on the cell surface and transported through early and late endosomes. They are surrounded by lipids that form a plasma membrane, which protects the contents of the vesicle and promotes its migration to the target cells.

However, clinically, the study of exosome endocytosis is of great importance [32][33]. The response at the receptor carries a risk of toxicity or side effects of exosomes; however, to date, this has not been confirmed when using exosomes in auditory cells [34][35][36]. In the case of cancer cell-derived exosomes, a factor that promotes the proliferation of cancer cells can metastasize [17]. Therefore, we believe that when using exosomes to be inserted into the auditory organs, we should test for toxicity and analyze which substances in the surrounding cells are stimulated.