Multiple biologically active components of human milk support infant growth, health and development. Milk provides a wide spectrum of mammary epithelial cell-derived extracellular vesicles (MEVs) for the infant. Although the whole spectrum of MEVs appears to be of functional importance for the growing infant, the majority of recent studies report on the MEV subfraction of milk exosomes (MEX) and their miRNA cargo, which are in the focus of this entry.

Recently, attention has been paid to the wide spectrum of lipid bilayer-enclosed milk extracellular vesicles (MEVs), especially the subfraction of milk exosomes (MEX) that contain proteins, lipids, Our perception that milk is not “just food” for the growing infant but represents a complex metabolic and endocrine signaling system for postnatal growth and programming via transfer of mTORC1-activating amino acids and gene-regulatory miRNAs [5][6][7] has been substantiated in recent years. MEX, a most important subfamily of MEVs, are biomolecular nanostructures released from mammary gland epithelial cells (MGECs), carrying specific biomolecular information. MEX are found in the milk of all mammals including HM and have received increasing scientific attention in recent years

miRNA-148a is also the most abundant miRNA of triacylglycerol-rich milk fat globules (MFGs) of HM [8]. Remarkably, the abundantly expressed miRNAs of human MEX exhibit striking nucleotide sequence homologies with the corresponding milk miRNAs of other mammals [9][10]. It has recently been demonstrated that the top 10 highly expressed MEX-derived miRNAs are evolutionarily conserved across the milk of various mammalian species, including humans [11]. Notably, the immune-related miRNAs enriched in MEX are resistant to harsh environmental conditions [12].

It is the intention of this review to provide up-to-date information on the impact of MEX and MEX-derived miRNAs on intestinal maturation and their systemic effects in human and animal tissues, which are important to understand the eminent role of MEX in infant health and development.

Cells take up exosomes by a variety of endocytic pathways, including clathrin-dependent endocytosis, and clathrin-independent pathways such as caveolin-mediated uptake, macropinocytosis, phagocytosis and lipid raft-mediated internalization [13][14][15]. Bovine MEX uptake in human and rat intestinal epithelial cells (IECs) is mediated by endocytosis and depends on cell and exosome surface glycoproteins [16]. [9] demonstrated that incubation of human MEX with normal colon cells (CRL1831) significantly increased cellular levels of miRNA-148a and decreased the expression of DNMT1. Furthermore, the addition of human MEX to normal fetal colon epithelial cells increased cell proliferation in an miRNA-dependent manner [17].

Of note, knockdown of miRNA-148a inhibits IEC proliferation associated with an increase in the expression of DNMT1 [17]. It has been demonstrated in cultured human colonic LS174T cells that exposure to bovine MEX enhances the expression of glucose-regulated protein 94 (GRP94) Furthermore, GRP94 plays a crucial role in gut homeostasis via chaperoning crucial components of the canonical WNT pathway [18]. Notably, mouse models harboring intestinal knockout of GRP94 led to WNT signaling defects through loss of the WNT co-receptor LRP6, resulting in early postnatal death with loss of intestinal barrier function, decreased number of villi and significant reduction in crypts [18].

IGF-1 plays an important role in intestinal growth [19] and is a bioactive hormone of HM [20]. The IGF system proteins are located in the gastric glands and epithelium and in the apical portion of the villous epithelium of the duodenum. Treatment with porcine MEX promoted IPEC-J2 cell proliferation, raised mice’ villus height, crypt depth and the ratio of villus length to crypt depth of intestinal tissues. MEX also increased CDX2, PCNA and IGF1R and inhibited p53 expression [21].

IGF-1 not only promotes growth of the GI tract [19][22], but protects IECs from oxidative stress, hypoxia, thermal stress and apoptosis in the setting of intestinal injury [23][24][25][26]. Moreover, IGF-1 exerts anti-inflammatory properties [27], promotes the development and cytotoxic activity of human NK cells [28], improves intestinal barrier function [29][30] and decreases bacterial translocation [31]. IGF-1 has thus been suggested to play a promising role in the treatment or prevention of necrotizing enterocolitis (NEC) [19][32][33].

The intestinal epithelium establishes a selectively permeable barrier that supports nutrient absorption and waste secretion while preventing intrusion by luminal materials. The appropriate maturation of the intestinal permeability barrier is of critical importance for the neonate and is often immature in preterm infants, who are at increased risk for developing NEC associated with disrupted tight junctions (TJs) [45][46]. Formation of functional TJs is critical for the maintenance of gut permeability and intestinal barrier function [47][48]. zonula occludens 1 (ZO-1) are considered crucial for creating the seal and thus regulate intestinal permeability [47][49][50].

Remarkably, bovine MEX derived from the 100,000×gultracentrifugation fraction of commercial cow milk restored the expression of ZO-1, which was diminished by dextran sodium sulfate (DSS) in a DSS-induced murine model of colitis [51]. It has recently been demonstrated that porcine MEX attenuated deoxynivalenol (DON)-induced damage of IECs. OCLN mRNA and protein in IPEC-J2 cells and the small intestinal tissues during continuous DON exposures could be significantly rescued by porcine MEX [52]. In accordance, human MEX administration 6 h prior to induction of experimental NEC, showed milder intestinal tissue injury than controls and had lower levels of pro-inflammatory cytokines and higher levels of epithelial TJ proteins ZO-1, claudin and occludin [53].

The IECs are covered by a thick layer of mucus, which is produced by goblet cells. Secreted/gel-forming mucins such as MUC2 are responsible for the formation of the mucus layer over the epithelium, whereas the transmembrane mucins such as MUC1 are poorly understood [54][55]. Mucus in the small intestine forms a diffusion barrier where anti-microbial substances keep the epithelium free from microorganisms [56]. Thus, goblet cells and their secreted mucins play a critical role in intestinal barrier function and immune homeostasis.

Among the factors influencing the mucus barrier, the microbiome plays a major role in driving mucus changes [55]. Mucus forms large pores and is penetrable to bacteria and other components, but despite this, in normal situations, the contact between bacteria and the epithelium is limited [58][59]. The continuous secretion of mucus and its flow towards the intestinal lumen donates anti-bacterial agents including lysozyme, deleted in malignant brain tumors 1 (DMBT1), immunoglobulin A (IgA), defensins, regenerating islet-derived 3γ (RegIIIγ) and phospholipase A2-IIA, which all keep bacteria away from the epithelial surface [55][60][61][62].

mice was coupled to increased bacterial colonization of the intestinal epithelial surface and enhanced activation of intestinal adaptive immune responses by the microbiota [63]. Thus, RegIIIγ is a fundamental mechanism of innate immunity that promotes host-bacterial mutualism by regulating the spatial relationships between microbiota and host [64]. RegIIIγ expression depends on MyD88-mediated signaling downstream of toll-like receptors and the IL-1 receptor family, which is critically involved in the induction of protective host responses upon infections [65]. Functional expression of MyD88 in IECs protected mice during intestinal infection, which was associated with enhanced epithelial barrier integrity and increased expression of the RegIIIγ [65].

Intestinal Treg cells are crucial to maintain immune tolerance to dietary antigens and gut microbiota [71]. The differentiation, migration and maintenance of intestinal Treg (iTreg) cells are controlled by specific signals from the local environment [72]. Intestinal tolerance requires gut homing and expansion of FOXP3+Treg cells in the lamina propria [73]. Antigen can be acquired directly by intestinal phagocytes, or pass through enterocytes or goblet cell-associated passages prior to capture by DCs in the lamina propria.

Exosomes play a pivotal role in important aspects of immune regulation and signaling between various cells of the immune system [81][82], especially in inflammatory bowel diseases [83][84]. [85] observed increased numbers of FOXP3+CD4+CD25+Treg cells in peripheral blood mononuclear cells (PBMC) incubated with human MEX. In accordance, rat pups exposed to β-lactoglobulin (BLG), one of the main allergenic proteins in cow milk, in the presence of maternal rat milk developed an immune response profile similar to that of unchallenged dam-reared rats associated with a greater FOXP3 expression and increased numbers of FOXP3+CD4+T cells [86]. Treg cells via exosome release transfer miRNAs, including let-7d, let-7b and miRNA-155, to conventional T cells.

Remarkably, increased Treg cell numbers are associated with raw farm milk exposure and lower atopic sensitization and asthma in childhood [87]. Of note, the protective effect of farm milk consumption on childhood asthma and atopy was lost when boiled farm milk was consumed instead of raw cow milk, pointing to a heat-labile protective factor in milk [88][89]. There is evidence that vigorous heat-treatment such as ultraheat-treatment (UHT: 135 °C, > 1 s) and boiling (100 °C) of commercial cow milk destroys MEVs and MEX and their miRNA cargo, including miRNA-148a [90][91], whereas pasteurization (72–78 °C, >15 s) of commercial milk did not affect total MEV numbers and preserved nearly 25–40% of milk´s total small RNAs, including miRNA-148a [90]. In comparison to high pressure processing of HM, HoP of HM (62.5 °C, 30 min) resulted in a significant decrease in MEX numbers [92].

Recent evidence indicates that the expression of uncoupling protein 3 (UCP3) is involved in the regulation of Treg cells [105]. When compared to UCP3+/+mice, CD4+T cells from UCP3-/-mice had increased FOXP3 expression under iTreg cell conditions [105]. Notably, UCP3 is a direct target of miRNA-148a. MEX via transfer of miRNA-148a, miRNA-155 and TGF-

In phagocytes, changes in cytosolic Ca2+regulate receptor-mediated endocytosis, phagosome-lysosome fusion and antigen processing. There is recent evidence that miRNAs are critically involved in the regulation of DC differentiation and function [115]. CaMKII inhibitors blocked the antigen-induced increase in total cellular MHC class molecules as well as their trafficking to the plasma membrane, which was associated with decreased presentation of particulate and soluble MHC class II-restricted antigen [116][117]. CaMKII has been identified as an activator of IκB kinase (IKK) specifically in response to TCR stimulation [118].

Furthermore, miRNA-148a was found to be a direct repressor of IκB kinase β (IKKβ) encoded onIKBKB[119]. IKKβ via phosphorylation of IκB results in dissociation of IκB from NF-κB allowing NF-κB translocation to the nucleus, which induces the synthesis of pro-inflammatory cytokines [120]. Apparently, MEX-derived miRNA-148a, miRNA-146a, miRNA-155, miRNA-125b and miRNA-21 in a synergistic fashion negatively regulate the activation of immune cells and prevent over-activation of immune responses. signaling may play a key role in the regulation of immune homeostasis and intestinal inflammation [121]. 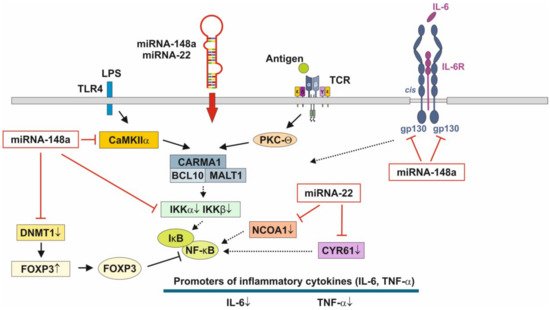 The pathway with the most significant enrichment in miRNA targets from preterm HM is glycosphingolipid biosynthesis [129], which is important for neurodevelopment, membrane function and signal transduction of lipid rafts [129]. [130] demonstrated significant differences in MEX miRNA composition between the HM of mothers delivering preterm infants compared to the HM produced for term infants. The abundant miRNAs in preterm MEX are similar to those from term MEX, whereas 21 low abundance miRNAs are specifically expressed in preterm MEX compared to early term MEX [130]. Notably, miRNA-22 is highly expressed in extremely preterm MEX followed by miRNA-148a [130].

miRNA-22 exerts strong anti-inflammatory activities via targeting the mRNA of cysteine-rich protein 61 [134], a component of the extracellular matrix, which is produced and secreted by several cell types including endothelial cells, fibroblasts and smooth muscle cells. CYR61 was mainly up-regulated in intestinal mucosa after intestinal ischemia/reperfusion injury in pigs [135]. In addition, miRNA-22 attenuates myocardial ischemia-reperfusion injury via an anti-inflammatory mechanism in rats [136] and via targeting CREB binding protein (CBP) protects against myocardial ischemia-reperfusion injury through anti-apoptosis in rats [137].

Taken together, the physiological adaptations of colostrum and MEX RNAs in the milk of mothers, who delivered preterm infants, may accelerate intestinal maturation, barrier function and innate immunity, critical factors for the prevention of NEC.

There is recent interest to use MEX and their miRNA cargo for the treatment and prevention of NEC [143] and to supplement MEX-deficient artificial formula [144]. Whereas UHT (135 °C, >1 s) and boiling (100 °C) of commercial cow milk destroys MEVs and MEX and their miRNA cargo [90][91], pasteurization (72–78 °C, >15 s) of commercial cow milk did not affect MEV numbers and preserved nearly 25–40% of milk’s total small RNAs [90]. However, the effects of UV-C irradiation on MEX structure and bioavailbilty have not yet been studied. Notably, lyophilization of exosomes without the cryoprotectant trehalose results in exosome aggregation, while the addition of trehalose prevents aggregation during lyophilization [145][146].