A cyclic nonapeptide Cyclolinopeptide A (CLA) was isolated from linen seeds oil [1]. The structure of CLA, cyclo-(Leu1-Ile2-Ile3-Leu4-Val5-Pro6-Pro7-Phe8-Phe9-), is presented in Figure 1. 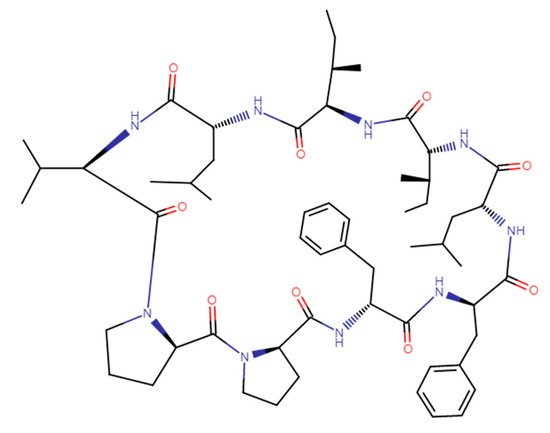 CLA belongs to the plant Orbitides family and was recently more closely characterized [2][3]. Although flaxseed extracts contain a variety of pharmacologically active compounds [2][3], the biological properties of CLA and its analogs have been investigated most extensively. In these studies, the native peptide was subjected to several modifications in order to improve its immunosuppressive efficacy and solubility, and to identify its key sequences in the structure. The modifications included, among others, truncation of peptide chain for both cyclic and linear analogs, as well as substitution of particular amino acid residues. The modifications paralleled evaluation of their immunosuppressive activities and mechanism of action.

2. The Effects of CLA on the Humoral and Cellular Immune Responses

Immunosuppressive properties of CLA were described in several models 30 years ago [4]. The peptide suppressed the humoral and cellular immune response to sheep erythrocytes (SRBC), mitogen induced proliferation of human peripheral blood mononuclear cells (PBMC) and activity of IL-1 and IL-2. Other activities of CLA included suppression of graft-versus host reaction, allogeneic graft rejection, post adjuvant polyarthritis in rats and retard of hemolytic anemia in New Zealand Black mice. CLA was effective when administered by various routs, i.e., intravenously, intraperitoneally or per os, and showed the suppressive potency comparable to that of cyclosporine A (CsA). The authors underline that efficacy of the peptide by oral administration may have potential therapeutic value. In a series of CLA linear analogs the peptides were successively truncated from the N-terminus and their immunosuppressive activity were evaluated [5]. The immunosuppressive potency of the peptides gradually decreased with shortening the peptide chain. Interestingly, the octapeptide with the sequence H-Ile-Ile-Leu-Val-Pro-Pro-Phe-Phe-OH appeared to be most suppressive in the models of humoral and cellular immune response, and inhibition of lipopolysaccharide (LPS) induced interleukin 1 and 6 and tumor necrosis alpha (TNF α) production played a major role in its activity.

3. Role of Single Amino Acids in the Activity of CLA Analogs

In subsequent investigations the importance of single amino acid residue on the activity of the peptide was determined by replacements with another amino acid residue. In five linear and five cyclic peptides, leucine, isoleucine and valine residues were consecutively replaced by threonine and their immunosuppressive activities were tested for the suppression of the humoral and cellular response to SRBC [6]. It appeared that the inhibitory actions of the peptides in the humoral response, comparable to that of CsA, were observed with linear peptides bearing the sequences H-Leu-Ile-Thr3-Leu-Val-Pro-Pro-Phe-Phe-OH and H-Leu-Ile-Ile-Leu-Thr5-Pro-Pro-Phe-Phe-OH. On the other hand, the suppression stronger than that exerted by CsA was registered for the peptide H-Thr1-Ile-Ile-Leu-Thr5-Pro-Pro-Phe-Phe-OH. In another study, a significant suppression of both types of the immune response was achieved by substitution of one or both phenylalanine residues with tyrosine [7]. The replacement of both phenylalanine residues with tyrosine was most effective, particularly in the cyclic form of the peptide c (Leu-Ile-Ile-Leu-Val-Pro-Pro-Tyr-Tyr-) and exceeded the activities of CsA and parent CLA. On the other hand, the consecutive substitution of each following amino acid residue with alanine residue (so called “alanine scan”) did not reveal any particular peptide of a special immunosuppressive potency [8].
All these analogs with single alanine residue were less effective in the humoral immune response, as compared with parent CLA, but showed a comparable efficacy with CLA in the suppression of the cellular response. Interestingly, the suppressive property of linear peptide H-Gly-Ile-Ile-Leu-Val-Pro-Pro-Phe-Phe-OH [9] could be further increased by additional glycine residues from both termini of the peptide.

4. Effects of Modified Amino Acids on Activity and Establishment of a Key Pro-Pro-Phe-Phe Sequence in CLA Analogs

A study on immunosuppressive activity of linear and cyclic analogs of the peptides, in which one or both phenylalanine residues were substituted by their sulfonated derivatives [10], revealed no differences between the actions of CsA and these compounds in the model of the humoral immune response to SRBC. However, in the model of the cellular immune response to SRBC, a linear peptide with sulfonated phenylalanine in position nine was more suppressive than CsA. Another modification involved the synthesis of linear and cyclic analogues of CLA with two dipeptide segments, Val5-Pro6 and Pro6-Pro7, replaced by their tetrazole derivatives [11] and the evaluation of their immunosuppressive activities in the humoral response test. The results showed that, even at low doses, the immunosuppressive activity of the cyclic analogs was equal to the activity exhibited by CsA and native CLA. The conformational data, in association with biological results, indicate that the Pro-Pro-Phe-Phe sequence and the preservation of the CLA backbone conformation are very important for the immunosuppressive activity. In another study linear and cyclic CLA analogues containing α-hydroxymethylleucine (HmL) in position 1 or 4, or α-hydroxymethylvaline (HmV) in position five were synthesized and subjected to cyclization [12]. Although the peptide containing HmL in position 4 was by 25% less suppressive in the lymphocyte proliferation assay than parent CLA, a clear advantage of such modification was that its solubility in water surpassed four times that of CLA.

5. Activity of c(Pro-Pro-β3hPhe-Phe-), the Cyclic Tetrapeptide

Perhaps a most advanced modification of CLA structure was received through cyclization of analogs of its tetrapeptide fragment Pro-Pro-Phe-Phe containing unnatural amino acid β3-homophenylalanine (β3hPhe) [13]. The structure of the tetrapeptide, termed 4B8M, is presented in Figure 2. 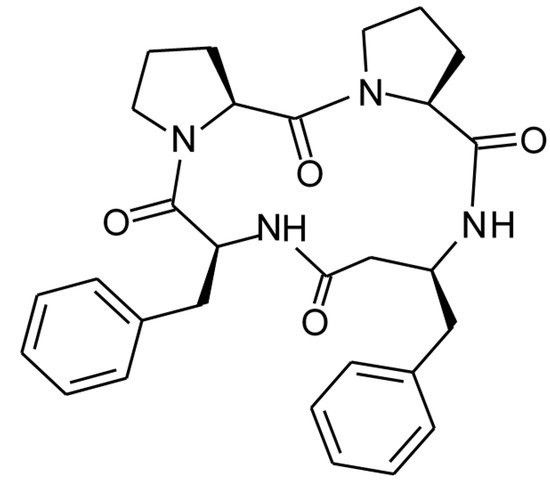 The tetrapeptide c(Pro-Pro-β3hPhe-Phe-) was investigated in several in vitro and in vivo experimental models using intraperitoneal, per os and topical routs of administration. It appeared that its toxic action towards mouse splenocytes was much lower when compared to parent CLA and cyclosporine (CsA). The peptide exhibited strong inhibitory action in the model of in vitro secondary immune response to SRBC. However, its ability to inhibit mitogen-induced lymphocyte proliferation and LPS-elicited TNF-α production was low. On the other hand, the peptide demonstrated remarkably strong anti-inflammatory actions in comparison with reference drugs in the models of contact sensitivity to oxazolone and toluene diisocyanate, nonspecific skin irritations, carrageenan inflammation in air pouch, ovalbumin induced pleurisy and dextran sulfate-induced colitis. The mechanism of action of the cyclic tetrapeptide is described below.