A cumulative number of MAVs are being discovered in hematophagous arthropods all over the world. There is a potential impact on the fitness and competence of the vector. Therefore, more research is needed to expand the knowledge about their prevalence, distribution, and diversity. The trend of MAVs reported in the literature enlightens how researches about MAVs are on the increase. The past decades have shown a dramatic surge in the literature recounting novel MSVs and classical arboviruses. The increase in research interest has provided new understanding about viral diversity and evolution. Finally, the new viruses discovered have created curiosity in their use as potential biological control agents.

Flaviviruses are enveloped, spherical, and about 50 nm in diameter. The surface proteins of the viral capsid are arranged in an icosahedral-like symmetry. They have a monopartite, linear, ssRNA(+) genome of about 9.7–12 kb [1]. These viruses can be divided into three main groups: those that are maintained in an arthropod–vertebrate cycle and strictly depend on each other are called dual-host flaviviruses [2]; those that are limited to vertebrates with an unknown arthropod relationship are known as vertebrate-specific flavivirus [3]; and those that replicate only in insect cell lines are termed insect-specific flaviviruses [2][4][5]. Flaviviruses and flavivirus-specific antibodies detected in West Africa are shown in Figure 1. 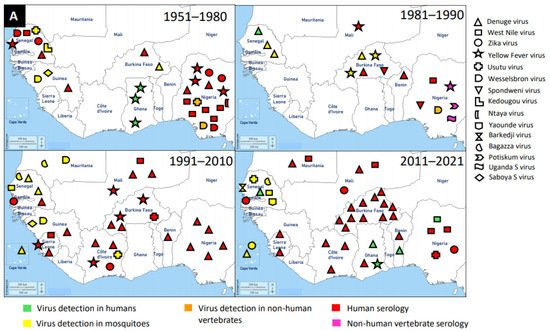 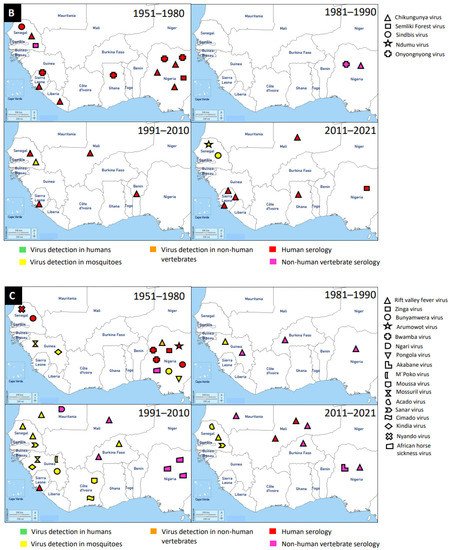 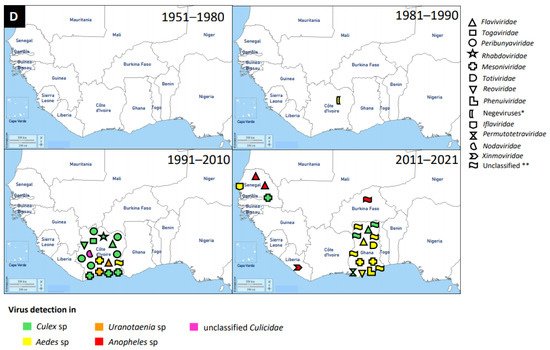 Figure 1. Distribution of MAVs in West Africa. A–C Mosquito-borne viruses (A) Flaviviridae; (B) Togaviridae; (C) Peribunyaviridae, Rhabdoviridae and Reoviridae; (D) Mosquito-specific viruses. Location of the signs in the country was chosen randomly and does not refer to the location where the study was performed; * = Proposed taxon; ** = Unclassified viruses.

The application of next generation sequencing (NGS) techniques in virus discovery has led to the identification and isolation of numerous MSVs [6]. West Africa is not left out in this discovery, and MAVs known to cause outbreaks and those which are not associated with human infections are outlined in Table 1. The first mosquito-specific flavivirus isolated was cell fusing agent virus (CFAV) in 1975 [7], but this virus was never identified in West Africa until 2016 in Ghana [8]. CFAV was isolated from mosquitoes collected via a mosquito surveillance field work from 2015 to 2016 in Ghana. Examples of other MSVs identified in West Africa include: Nounane virus and Nienokoue virus (Côte d’Ivoire); Anopheles flavivirus-like virus and Barkedji virus (Senegal); and Culex flavivirus (Ghana) [9][10][8][11][12]. Nounane and Nienokoue viruses were identified in Tai National Park, a tropical rainforest zone, from the Culex and Uranotaenia mosquitoes respectively [11][12].

The presence of flaviviruses in West Africa is not limited to MSVs, but also medically important MBVs, such as DENV, WNV, ZIKV, YFV, and Usutu virus (USUV). McNamara et al. seem to provide the first report on mosquito-borne flaviviruses, including YFV, WNV, ZIKV, and Uganda S virus in the 1950s [116]. West Africa has experienced several outbreaks of DENV and it is the main MBV circulating in the human population and posed a major public health threat. It is likely that the first detection of DENV in West Africa was in Ibadan, Nigeria in 1964 from febrile patients [132]. However, the most recent outbreak of DENV was reported in Ouagadougou, Burkina Faso in 2017 [133]. In addition to DENV outbreaks in Burkina Faso, there were reports in other countries, such as Nigeria, Côte d’Ivoire, Senegal, Sierra Leone, Benin, Mali, Cape Verde, Ghana, Mauritania, and Guinea in a decreasing order of incidence. Therefore, Burkina Faso had several DENV reports unlike other West African countries. The main vectors for DENV are Aedes mosquitoes (mainly Aedes aegypti) through which DENV is transmitted to humans (amplifying host). DENV was mainly detected via serological investigations in humans, although Ae. aegypti mosquitoes were also documented as a source of detection.

Members of this family are enveloped, spherical, icosahedral, and 65–70 nm in diameter. They have a capsid with icosahedral symmetry made of 240 monomers. Additionally, they have a monopartite, linear, ssRNA(+) genome of 9.7–11.8 kb [134]. Alphaviruses are mostly transmitted by mosquito vectors and they have amplifying vertebrate hosts. Acute infections in vertebrates are characterised by a high titer of the virus making it possible for mosquitoes to be infected in the course of blood feeding [135].

Tai Forest alphavirus (TFAV), Eilat virus (EILV), Agua Salud alphavirus (ASALV), and Mwinilunga alphavirus (MWAV) are the main mosquito-specific members of this family [136][137]. However, only TFAV was identified and isolated in West Africa. TFAV was isolated from Culex decens mosquitoes collected in 2004 in Côte d’Ivoire [136]. TFAV has a relationship with western equine encephalitis virus complex through phylogenetic analyses [136].

Medically important mosquito-borne alphaviruses that are emerging public health threats include Venezuelan (VEEV) and eastern (EEEV) equine encephalitis viruses, and CHIKV. These viruses can cause outbreaks of severe meningoencephalitis with frequent lethal consequences, or polyarthritis with agonizing and chronic joint pain [135]. Likely, the first epidemic of CHIKV in West Africa occurred in 1969 in Ibadan, Nigeria [138]. It is probable that the virus was first isolated from Aedes mosquitoes (Ae. aegypti, Ae. grahami, and Ae. taylori) collected in 1963 in Lagos, Nigeria, and serological survey revealed antibodies in the sera of study participants [139]. The recent detection of CHIKV in West Africa occurred between 2016 and 2017 in Sierra Leone and this was via Ion Torrent semiconductor sequencing to profile pathogen spectrum in archived human yellow fever virus-negative sera [140]. A broader spectrum of pathogens was suggested by the distribution of sequencing reads and must be considered in clinical diagnostics and epidemiological surveillance [140]. Until now, a greater number of cases of CHIKV were reported in Sierra Leone, Nigeria, and Senegal, compared to the very few cases in Ghana, Benin, Mali, and Liberia. In general, CHIKV was mainly detected by serology in humans, although there were a few Aedes mosquito detections.

These viruses are enveloped, spherical, or pleomorphic virions 80–120 nm in diameter. They have a segmented, linear ssRNA(-) genome, with L segment between 6.8 and 12 kb, M segment between 3.2 and 4.9, and S segment between 1 and 3 kb [141]. This is a newly established family which includes four genera for globally distributed viruses: Orthobunyavirus, Herbevirus, Pacuvirus, and Shangavirus. Mostly, peribunyaviruses are maintained in a vertebrate–arthropod transmission cycle [142].

The mosquito-specific members of the family include Ferak virus, Jonchet virus, Herbert virus, and Tai virus. Interestingly, all these MSVs were identified in Côte d’Ivoire [143][144][145]. These viruses were identified via a mosquito surveillance study, where mosquitoes were trapped from February to June 2004 in Taï National Park, Côte d’Ivoire [146]. The mosquito samples were further analysed to identify and isolate these viruses [143][144][145]. However, the viruses were mainly isolated from Culex mosquitoes.

An increasing number of MAVs, especially the mosquito-specific ones, are distributed globally. MAVs were also classified under the following virus families: Rhabdoviridae, Mesoniviridae, Totiviridae, Reoviridae, Phenuiviridae, Permutotetraviridae, Iflaviridae, Xinmoviridae, Nodaviridae, and Negeviruses (proposed taxon). The latest mosquito-specific mesonivirus is Dianke virus, which was isolated from mosquitoes in Eastern Senegal [151]. Interestingly, Dianke virus was identified in different species of mosquitoes, including Aedes sp, Culex sp, Mansonia sp, and Uranotaenia sp. This explains why mesoniviruses are said to have a broad host range and geographical distribution. Another recent and novel mosquito-specific iflavirus isolated from Aedes vexans mosquitoes in Senegal is Aedes vexans iflavirus [3]. Ae. vexans mosquito is a competent vector of numerous MBVs, such as RVFV and ZIKV. Therefore, it is possible that Aedes vexans iflavirus could interfere with the replication and transmission potentials of RVFV and ZIKV. This review therefore suggests studies involving the interaction of MSVs with MBVs to answer the search for a probable biological vector control tool against arboviruses.

The medically important mosquito-borne member of the family Phenuiviridae, with several reports, is the RVFV. RVFV was reported in Burkina Faso, Sierra Leone, Guinea, Mali, Nigeria, Senegal, and Mauritania. It is likely that the first report of RVFV was in 1959 in Nigeria [13]. However, the latest RVFV case was detected in 2016 in Mali, Niger, and Nigeria [14][15][16], and this is the first occurrence of RVFV in Niger. RVFV was detected in culicine mosquitoes and serological investigations in humans, bats, livestock, horses, and camels.