Thiols (RSH) and disulfides (RSSR) are components of many proteins, biopolymers, and biomolecules.  Many can be interconverted by simple oxidation and reduction reactions that change drastically their properties and those of host molecules of which they are a part.

Thiols (RSH) and disulfides (RSSR) are components of many proteins, biopolymers, and biomolecules. In nature, thiol and disulfide functional groups contribute to key biological functions related to cell signaling, protein conformation and folding processes, redox homeostasis, and biopolymer secondary structure development. Thiol groups and/or disulfide linkages can be incorporated into polymers to produce stimulus-responsive and/or self-healing materials. They owe their stimulus-responsiveness to covalent disulfide bonds, which can be broken and re-formed under mild conditions. The extent of reactivity, and, thus, the stimulus-responsive behavior depends on the nature of the groups flanking the disulfide bond, as well as interactions with stimuli such as light, heat, mechanical force, and changes in the pH or redox state [1]. The ease with which thiols can be converted to disulfides, and vice versa, renders thiol-containing polymers (thiomers) similarly dynamic.

2. Some Important Reactions of Thiols and Disulfides 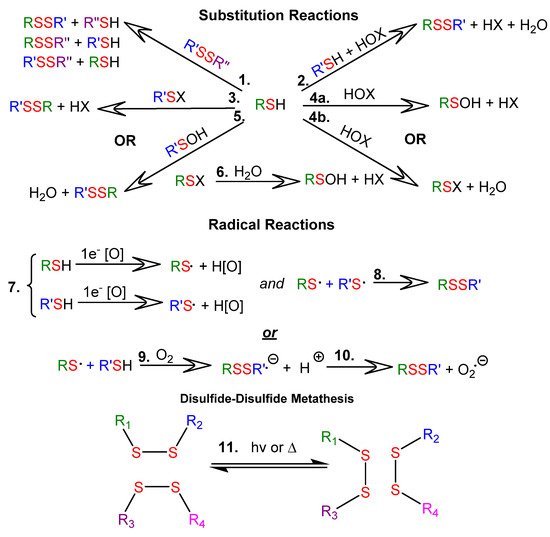 Figure 1. Reactions of thiols (RSH) and disulfides (RSSR): 1.1 SN2-mediated thiol-disulfide exchange; 1.2–1.6. Thiol oxidation with two-electron oxidants, where RSX is a sulfenyl halide, RSOH is a sulfenic acid, HOX is a halohydrin, and HOx is the reduced oxidizing agent; 1.7–1.10 Thiol oxidation with one-electron oxidizing agents; 1.11 disulfide-disulfide metathesis.

3. Biological Relavance of Thiols and Disulfides

Some molecules of biological relevance that exploit the disulfide bond are shown in Figure 2. For example, processes involving cystine (Cys2) and cysteine (Cys) interconversions have structural and functional consequences on the macroscopic and microscopic scale. On a macroscopic level, disulfide bonds in Cys2 stabilize the secondary structure of keratin-based materials, such as hair, wool, and nails. The cleavage of disulfide bonds in keratin results in a dramatic decrease of strength and elasticity of these materials. In that regard, the redox states and pH of intracellular and extracellular environments control the reversible oxidation of Cys to Cys2 in polypeptides. As such, disulfide bonds are keys to the protein folding process, and thus strongly dictate protein conformation.

Figure 2. Structures of some biologically important thiols and disulfides.

4. Thiols and Disulfides in Materials Science

Nature has shown that thiol-disulfide exchange and redox reactions can be used to interconvert thiols and disulfides reversibly in response to changes in pH or redox state. The dynamic nature of the disulfide bond has been extended to materials science to produce a wide range of stimulus-responsive materials. The reviews of Seidi [3] and Zhang [4] include recent examples of controlled drug release, with an emphasis on stimulus-responsive and redox-triggered drug release. These reviews include several examples of thiol- and disulfide-based materials.
Thiol-disulfide exchange is often used to bind thiomers to disulfide-containing substrates, and to trigger the release of disulfide bound “cargo,” such as drugs or dyes, from a polymer upon exposure to high concentrations of thiols and/or changes in pH. Thiol oxidation and disulfide reduction are commonly used to form and break covalent disulfide crosslinks in polymeric networks, respectively. The scission and reformation of disulfide crosslinks in situ via reduction and oxidation, respectively, is often reported as a means for reversible sol-gel transitions. Commonly, dramatic rheological changes are observed over several reversible sol-gel redox cycles. Self-healing behavior has been widely reported for a variety of disulfide-containing polymers, due to disulfide-disulfide shuffling reactions, which occur after breakage.

Drug delivery is among the most common biomedical applications of thiomers and disulfide-containing polymers. The prototypical drug delivery system releases a conjugated drug molecule after being exposed to a cellular trigger. For example, solid tumors have higher levels of GSH and lower pH levels than healthy tissues. Chemotherapy employing a drug delivery system can be tuned to release the drug when exposed to the unique chemical environment of a cancer cell; more targeted drug delivery results in fewer side effects [5]. Figure 3 demonstrates the wide variety of drug delivery systems that rely on disulfide bonds for controlled delivery of nucleic acid therapeutics [6]. 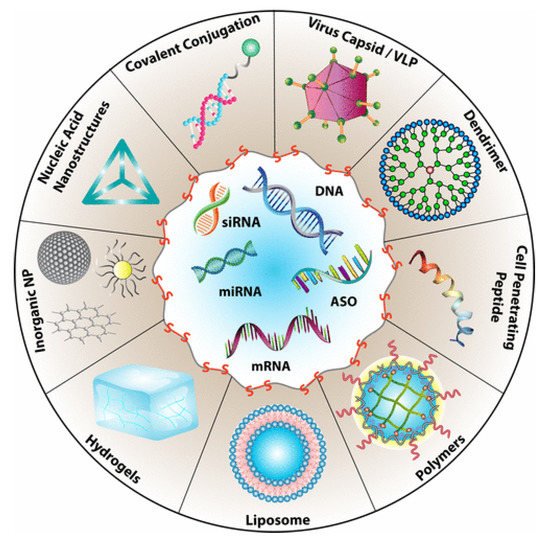