Stress is defined as a state of threatened or perceived as threatened homeostasis. Emerging evidence suggests that life-stress experiences can alter the epigenetic landscape and impact the function of genes involved in the regulation of stress response. More importantly, epigenetic changes induced by stressors persist over time, leading to increased susceptibility for a number of stress-related disorders.

Stress is defined as a state of threatened or perceived as threatened homeostasis. A broad spectrum of extrinsic or intrinsic, real or perceived stressful stimuli, called ‘stressors’, activates a highly conserved system, the ‘stress system’, which adjusts homeostasis through central and peripheral neuroendocrine responses. The stress response depends on highly complex and tightly-regulated processes and involves the cross-talk of molecular, neuronal and hormonal circuits [1]. The well-tuned coordination of these systems is indispensable for an organism in order to adapt to stressors and re-establish homeostasis (adaptive stress response)

In mammals, glucocorticoid hormones are the main central effectors of the stress response, playing a crucial role in the effort of an organism to maintain its homeostasis during periods of stress [1]. Aberrant glucocorticoid signaling in response to stressors can lead to sub-optimal adaptation of an organism to stress events, a state that has been defined as cacostasis or allostasis [2]. When an organism falls into cacostasis, it strives to find ways to survive and maintain its stability outside of the normal homeostatic range, and the cost that it has to pay for this purpose is termed allostatic or cacostatic load [2].

Emerging evidence suggests that exposure to early-life stress events may alter the epigenomic landscape, which is defined as changes in the regulation of gene expression without changes to the DNA sequences [3]. The long-lasting nature of epigenetic changes led the scientific community to propose that glucocorticoid secretion in response to stress, as well as genes involved in the glucocorticoid signaling pathway, play a fundamental role in shaping a form of epigenetic memory through which stressful experiences become biologically embedded [3]. Critically, transcriptional dysregulation caused by aberrant epigenetic changes in glucocorticoid-related genes has been pathophysiologically linked with the emergence of a host of stress-related disorders [4].

2. Glucocorticoid Signaling via GRs and MRs upon Stress Response

The stress response is primarily mediated by the hypothalamic–pituitary–adrenal (HPA) axis-, as well as by effectors acting on peripheral organs [2][5][6][7]. Upon stress-induced activation, the HPA axis stimulates the release of adrenocorticotropic hormone (ACTH) that drives the adrenal secretion of glucocorticoids in the blood circulation [8] (Figure 1). Glucocorticoids exert their effects on target organs mainly through binding and activation of two types of receptors, the mineralocorticoid (MR) and the glucocorticoid (GR) receptor [1]. 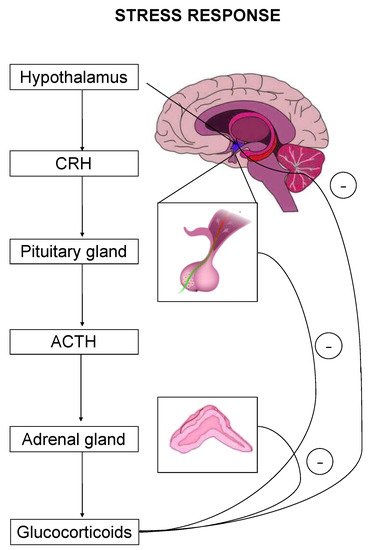 Figure 1. The hypothalamic–pituitary–adrenal (HPA) axis is the primary effector of a stress response. Critical hormones and organs are shown, whereas cycles with the negative symbol indicate negative feedback mechanisms.

MRs and GRs interact with each other throughout the stress response, mediating distinct but complementary roles, and their synergistic action is considered essential for the maintenance and/or restoration of homeostasis.

On the other hand, GRs are indispensable for the termination of stress response, the energy mobilization, the recovery, and the memory storage of stressful experiences for future purposes. It has been suggested that the stress response could be divided into four phases, based on spatiotemporal features of nongenomic and genomic GCs actions [9][10][11] (Figure 2).

Figure 2. The stress response can be divided into four phases: (1) Basal: intracellular MRs are occupied with low concentrations of glucocorticoids (GCs). (2) Onset: GCs secretion from the adrenal cortex in response to a stressful event. GCs bind to MRs, which are progressively activated as the concentrations of GCs increase (3) Termination: GRs are activated and mediate the termination of stress response by exerting negative feedback at the hypothalamic and anterior pituitary level (4) Priming: Stressful experiences will be stored through GRs action in hippocampus and prefrontal context for future use.

MRs and GRs form a tightly co-regulated network that coordinates stress response and this observation led to the genesis of MR/GR balance hypothesis [11]. According to this hypothesis, an imbalance between the effects of GRs and MRs during the stress response may lead to dysregulation of the HPA axis and an inability to adapt to stressors and restore homeostasis, thereby conferring an increased vulnerability to a number of stress-related disorders [12].

4. Epigenetic Alterations as a Cause of Dysregulation of the Stress Response

An important mechanism that has been implicated in the development of MR/GR imbalance and HPA axis dysfunction pertains to the epigenetic alterations induced by major life stressors [13]. It has been proposed that epigenetic modifications can be a part of a memory system that stores and transmits information about past stressful experiences to progeny cells, thus shaping cellular responses to subsequent stressor stimuli [13].

The GR activation by GCs instigates not only changes in gene transcription upon stress, but also alterations in DNA methylation patterns, with the most preeminent change being the DNA demethylation at or near the GRE elements [3].

Specifically, glucocorticoids can shape the epigenome through four major mechanisms, which primarily involve GR signaling (Figure 3) [14][15]: (a) GCs can rapidly and dynamically evoke demethylation of cytosine-guanidine dinucleotides (CpGs) at or near GREs [3]. The mechanism behind this action implicates GC-dependent transcriptional upregulation of enzymes that catalyze active demethylation (ex. TET family of 5-methylcytosine dioxygenases), as well as downregulation of DNA methyltransferases (ex. DNA methyltransferase 1, DNMT1) [16]. Although GR signaling during stress has been generally associated with demethylation processes, the action of GRs has also been linked with methylation of a number of genes [17]; (b) GCs can induce histone modifications, such as methylation and acetylation of histone proteins, via direct GR binding or via interaction of GRs with other transcription factors (TFs) that recruit histone acetyltransferases [3]. For instance, the TF RelB/p52 has been shown to recruit CBP binding protein and HDAC deacetylase that promote acetylation and deacetylation of histone 3 Lys in the promoter regions of CRH and COX-2 genes [18]; (c) GCs can regulate expression patterns of several miRNAs, such as miR-218, miR-124, miR-29a, possibly through GR action, given that the genes encoding the altered miRNAs are enriched in predicted as GRE sites [19]; and (d) GCs can lead to chromatin remodeling via GR-activation, changing the accessibility of genomic regions to TFs [20]. 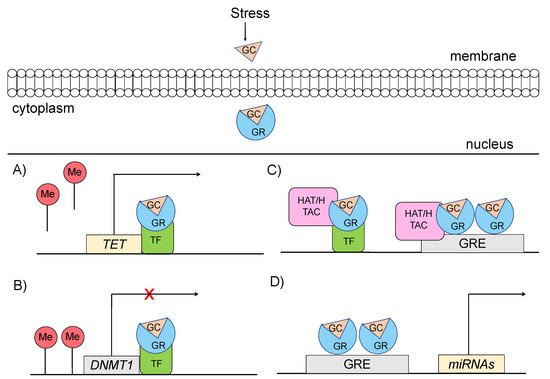 Epigenetic alterations induced by GCs can appear at specific genomic loci but also at the genome-wide level [3].

Epigenetic changes in response to exposure to stress in early life have also been documented in the human serotonin transporter (5-HTT), which is encoded by SLC6A4 gene and is considered to be a key regulator of the serotoninergic system that regulates the stress response [21]. In particular, early life adversities, such as childhood abuse, have been associated with increased methylation status of SLC6A4 at exon 1 [22][23].

Interestingly, epigenetic studies have demonstrated sex-dimorphic long-lasting methylation changes in various CpG sites of the oxytocin receptor gene (OXTR) following early-life adverse events [24]. Specifically, exposure to adverse events during childhood and adolescence has been associated with higher methylation levels of CpG sites in OXTR gene only in females but not in males [24]. Summary of the most recent findings about epigenetic modifications upon stress exposure are shown in Table 1.

Table 1. Summary of the most recent findings about epigenetic modifications upon stress exposure.

Epigenetic modifications constitute part of a mechanism through which stressful life experiences are embedded in an individual’s biology, shaping the response to future threats [13]. More importantly, epigenetic changes have the intrinsic feature to persist over time, with a growing number of studies suggesting that they may predispose an individual to the development of stress-related phenotypes and diseases [13].

The interplay between genetic background-epigenetic environment seems to be more relevant during critical developmental periods where the epigenome shows heightened plasticity, such as in childhood, adolescence, or later life, since no association among them has been reported during adulthood [40].

Studies exploring methylation changes inNR3C1, have investigated the effect of life-stress experiences occurring at different time periods, from as early as prenatal life to childhood and adulthood [41]. The majority of these studies reported significant hypermethylation at the exon 1F promoter ofNR3C1, which was also positively associated with the severity and the duration of an adverse event [42]. It has been proposed thatNR3C1hypermethylation act as a mediator of the association between early life adversity and stress-related disorders [42]. In particular, prenatal stress due to maternal depression and early prenatal loss has been associated with hypermethylation of CpG sites from 35 to 37, at hGR 1F promoter, triggering the development of depression, bipolar disorder and suicidal behavior later in life [43].

Recent studies in animal models of stress and depression revealed a decrease in Bdnf hippocampal mRNA levels, mediated by long-lasting methylation and acetylation changes in the promoter regions ofBdnfthat were induced from perinatal exposure to methylmercury [44] or chronic social defeat stress conditions [45][46]. Moreover, in patients with depression, there was a significant decrease in BNDF protein levels compared to controls [47], while administration of antidepressants, such as selective serotonin reuptake inhibitors, stimulatedBDNFexpression and reversed the symptoms of depression [48].

Major depressive disorder has also been associated with increased methylation levels ofSLC6A2[49] in subjects with a history of exposure to stress early in life, such as childhood maltreatment (CM) [23] or low socioeconomic status (SES) during adolescence [50]. In particular, greater methylation levels of CpG sites 11 and 12 of SLC6A2 gene were reported in individuals with a CM history [23] and greater methylation levels ofSLC6A2promoter were reported in individuals with a history of low SES during adolescence [50]. Both methylation patterns were associated with the emergence of depressive symptoms later in life [23][50].

The OXTR protein plays an important role in the regulation of social cognition (feelings of attachment and social recognition), as well as in the regulation of anxiety-related and social behaviors [51]. In female subjects, adverse events in adulthood (financial pressure, high crime neighborhood) may induce methylation pattern changes inOXTRand may increase vulnerability to depression [52]. Furthermore, early traumatic events in childhood have been associated with altered methylation status ofOXTRthat may mediate the development of mood disorders in adulthood More specifically, hypomethylation of CpGs located in the promoter region ofOXTRexon 1 and hypermethylation of sites located inOXTRintron 3 have been associated with depression and anxiety disorders in subjects with a history of childhood abuse [53].

Compelling evidence suggests that epigenetic modifications in stress-related genes involved in glucocorticoid signaling represent a mechanism through which stress-related experiences are embedded in an individual’s biology. Epigenetic changes can influence the subsequent coping strategies [54] to stressors and, when accumulated, can contribute to the development of stress-related disorders [13]. A number of studies, claimed that epigenetic changes can actually be inherited to the next generation and as such parent’s stressful experiences could influence offspring’s vulnerability to many pathological conditions [55][56][57][58]. However, many researchers are sceptical about the potential of trauma inheritance through epigenome [59] and also highlight the need to perform epigenetic studies taking into account an individual’s genetic background [60][61].

The imperfect fit of different epigenetic studies that follow a traditional reductionist paradigm, suggests that the interaction of stressors with the epigenome and its implication in the emergence of stress-related disorders is a much more complex network than previously thought, and demands our investigation in a context-specific and time-dependent manner. We hope that this article will help future studies, to build upon existing and novel findings their design, taking into account confounders that may bias study results, in order to delineate the mechanism linking stress exposure to epigenome and stress-related disorders development via the action of GCs.