1. The ECM, Focal Adhesions and Adherens Junctions in Periodontal Health and Disease

The periodontium is a complex composite tissue consisting of the gingiva, the periodontal ligament (PDL), cementum, and the alveolar bone. Beneath harboring various cell types, amongst others, gingival keratinocytes (GKs), gingival fibroblasts (GFs), periodontal ligament fibroblasts (PDLFs), cementoblasts and osteoblasts, the ECMs of the different periodontal cell and tissue entities are considerably different [1].
The cementum and the alveolar bone consist of an inorganic hydroxyapatite matrix and collagen type I as the major organic compound [2]. Additionally, the glycosaminoglycans (GAGs) decorin and biglycan as well as the glycoproteins (GPs) osteonectin, osteopontin, fibronectin, and osteocalcin can be found in the ECM of both tissues [3][4]. The PDL harbors the fibrous collagen types I and III, and small amounts of collagen V and VI [5]. Above, the basement membrane collagen types IV and VII and collagen type XII, which is important for fibrillar organization, are expressed in the PDL [6]. Elastin, fibronectin (FN) and chondroitin-/dermatan-/keratin-sulfate, containing GAGs, also support PDL function [7].
The gingiva contributes to periodontal integrity via epithelium and connective tissue. While the GKs form a stratified squamous epithelial layer, GFs are embedded in a lamina propria with collagen type I, III, elastin and many other macromolecules [8].
Physical ECM properties are key determinants of cell behavior in vitro and in vivo. The stiffness of the ECM, quantified by the Young’s modulus, as well as viscoelastic properties, spatial arrangement of adhesion points, and other geometric constraints, influence cellular responses through MT and other signaling hubs [9][10][11]. This means that ECM composition, homeostasis and MT are tightly coupled and are, therefore, highly interdependent [12]. Cell morphology, migration, proliferation, differentiation, and apoptosis are consequently not only influenced by biochemical signals, but also by the direct mechanical properties of the respective ECM environment [13]. Interestingly, cellular responses, namely the actomyosin-derived cell-inherent contraction forces, as discussed below, seem to directly reflect ECM stiffness, meaning that the Young’s modulus of the ECM is encoded within the cell’s response to that specific microenvironment [14].
Mechanistically, the above-mentioned ECM constituents directly or indirectly, i.e., mediated through adaptor proteins, interact with neighboring cells via surface receptors. Regarding MT, the family of integrin proteins is especially important as they are the core linking hub between the ECM and the cytosol. Within the plasma membrane, integrins form heterodimers, which are composed of an α- and a β-subunit. Various combinations of heterodimers have been described in different experimental systems and they proved to have different ligand specificity. Table 1 summarizes the most important integrin heterodimers and their corresponding ligands relevant to periodontal MT [15][16][17][18][19][20][21]. As can be seen, one heterodimer can sometimes bind more than one ligand (e.g., α1β1-integrin) and one ligand, such as fibronectin, is recognized by multiple heterodimers. Therefore, the tissue- or cell-specific expression pattern of integrins determines its interaction with the ECM. Periodontal cell populations foremostly harbor α2β1, α3β1 and α5β1 integrins. Of interest, the expression pattern of periodontal integrins changes in response to damage or during wound healing or carcinogenesis [22].
Table 1. Selected integrin heterodimers and their corresponding ligands.
Upon mechanical loading, such as during mastication, occlusion or orthodontic treatment, the ECM of the periodontal tissues is deformed. Exemplarily, occlusion forces that exert compressive load onto a tooth are transmitted to the PDL, which serves as a push-pull transducer [23]. This means that the ECM components within the PDL, such as the collagen fibers, are stretched. As they are either directly or indirectly connected to the integrin receptors and these proteins undergo a conformational change, which is herewith the consequence of the initial mechanical stimulus. Therefore, these surface receptors are considered mechanoreceptors, as they transmit the ECM’s physical state into the cell’s interior.
Intracellularly, integrins are linked to various signaling proteins, which function as a molecular clutch that couples integrin–ECM interaction to intracellular biochemical signaling, the centerpiece of MT. Histologically, these integrin-dependent cell-to-matrix connection structures are called FAs [24].
Next to the plasma membrane, a plethora of proteins form the “integrin signaling layer”, where focal adhesion kinase (FAK), the head domain of talin and paxillin interact with the cytoplasmic integrin domain. Vinculin and the tail of talin are designated as the “force transduction layer” [25]. Finally, these proteins are linked to the actin cytoskeleton through an “actin binding layer”, which consists of α-actinin, vasodilator-simulated phosphoprotein (VASP), and zyxin [26]. Beneath the listed proteins, many other cellular key players, such as sarcoma (Src)-family kinases or the extracellular signal-regulated kinases 1/2 (ERK1/2) have been shown to directly interact with FAs and regulate the activity and assembly status of its components (Figure 1A) [24][27][28]. 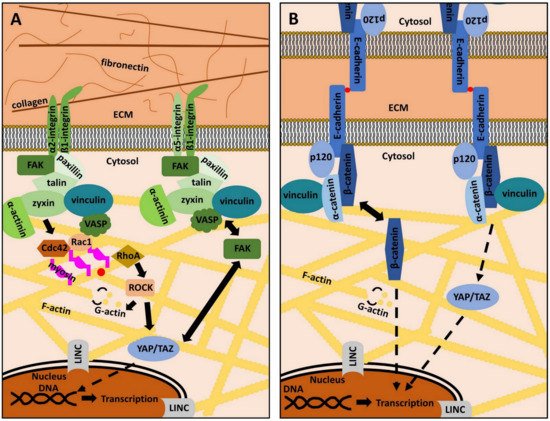 MT-immanent mechanobiological signals are key determinants of cell behavior and tissue adaptation to the external cell and tissue environment. The interplay of molecular mechanosensors and mechanotransducers is complex and represents the tight interrelationship between different cellular compartments and signaling hubs. FAs, AJs, YAP/TAZ, the cytoskeleton, LINC, and the nucleoskeleton only represent a small subset of cellular players involved in MT and NMT but reveal important principles of how the cell percepts and integrates biophysical mechanical information. Periodontal tissues are of special interest to MT research and are a paradigm of how the above-discussed signaling networks, cascades, and molecules govern tissue development, homeostasis and regeneration, cell proliferation, differentiation, and pathologic processes, such as periodontitis or OSCC. By further elucidating the cell-type specific and spatiotemporal fine-tuning of mechanobiological processes, the future translation of these principles into clinical applications will prove to be a strong tool in the field of oral regenerative medicine.