2.1. Features of the Studies Selected for Analysis

2.2. Specific Contents of the Pediatric Inpatient Fall Prevention Programs in the Selected Studies

Table 2 provides details of the fall prevention programs investigated in the nine selected studies. Four out of nine studies divided the patients into a high-risk fall group and a low-or medium-risk fall group to apply the corresponding protocol. Using the high-risk sign/sticker was a common protocol guideline in all studies concerning the high-risk fall group. Cooper and Nolt, Hill-Rodriguez et al., Kim et al., Neiman et al., Rouse et al., and Stubbs and Sikes [7][8][9][12][14][15] recommended the signs to be shown on the bed and outside the ward, while Lee et al. [11] recommended that patients wear a green tag on the wrist or ankle. The next guideline was close observation. Neiman et al., and Murray et al. [9][13] stressed the importance of hourly rounding and one-to-one observation, while Cooper and Nolt, Hill-Rodriguez et al., and Rouse et al. [7][8][12] suggested placing patients close to the registered nurse (RN) station and leaving the room door open. The next important guideline was to assist with patients’ ambulation. The guidelines suggested frequently checking and safely supporting the patients. The general protocol applied to the low-and moderate-risk group included educating patients and their families, using low beds, always leaving the bed rails up with locked breaks, and never leaving the child alone.
Table 2. The detailed contents of the inpatient fall prevention programs.
The detailed contents of the inpatient fall prevention programs. 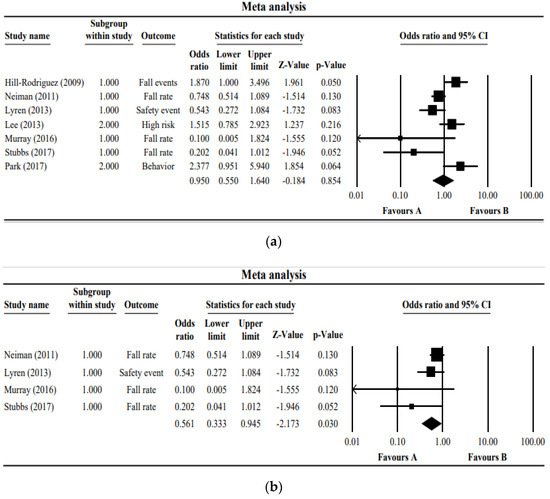 Figure 2. (a) Forest plot of the studies included in the meta-analysis. (b) Forest plot of the studies measuring the number or the rate of inpatient falls as an outcome. The boxes in the graphs show the effect estimates from the single studies, while the diamond symbol shows the pooled result.
In other words, the fall-prevention programs for inpatients have been effective in reducing the fall rate. It was confirmed that there was no publication bias because the corrected effect size and the original effect size were the same by adding a study to be symmetrical through funnel plot, Duval and Tweedie’s trim and fill method (Figure 3). 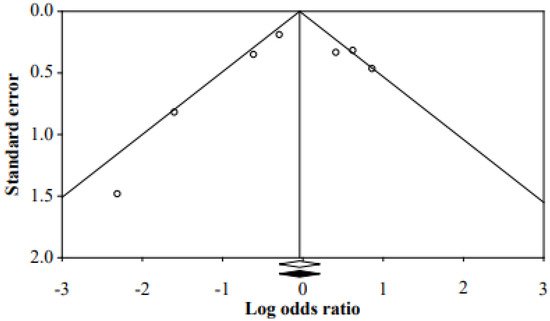 Figure 3. Funnel plot of the studies.