Microstructural phase evolution during melting and casting depends on the rate of cooling, the collective mobility of constituent elements, and binary constituent pairs. Parameters used in mechanical alloying and spark plasma sintering, the initial structure of binary alloy pairs, are some of the factors that influence phase evolution in powder-metallurgy-produced HEAs. Factors such as powder flowability, laser power, powder thickness and shape, scan spacing, and volumetric energy density (VED) all play important roles in determining the resulting microstructure in additive manufacturing technology. Large lattice distortion could hinder dislocation motion in HEAs, and this could influence the microstructure, especially at high temperatures, leading to improved mechanical properties in some HEAs. Mechanical properties of some HEAs can be influenced through solid solution hardening, precipitation hardening, grain boundary strengthening, and dislocation hardening. Despite the HEA system showing reliable potential engineering properties if commercialized, there is a need to examine the effects that processing routes have on the microstructure in relation to mechanical properties.

The discovery and application of alloying and composite technology have made possible the achievement of various categories of materials that exhibit a wide range of properties. An example is a novel alloy system known as high-entropy alloys (HEAs). [1] defined HEAs, by composition, as alloys having at least five principal elements, wherein each has a concentration between 5 and 35 at.%. [2] also categorized HEAs based on elemental composition and configurational entropy.

Some categories of the HEAs studied are lanthanide HEAs [3][4], refractory HEAs (RHEAs) [5], and lightweight HEAs (LWHEAs) [6]. RHEAs are primarily developed for exceptionally high-temperature applications (up to 1400 °C), but with a disadvantage of high density. PGM-HEAs consist of precious elements (Au, Ag, Pt, Ir, Os, and Re), while LWHEAs are composed of low-density elements such as Li, Mg, Be, and Al.

Over the past decade, material scientists have used several techniques in synthesizing HEAs, such as the melting and casting route, the powder metallurgy (PM) route, and additive manufacturing (AM) processing techniques. The PM process involving mechanical alloying (MA) and consolidation by spark plasma sintering (SPS) is usually used in attempts of achieving homogeneous microstructures in HEAs. In contrast, the AM fabrication route in recent years has received more attention in circumventing the flaws of other synthesis processes. The AM process is a flexible manufacturing technique with the capability of producing parts with complex geometries, finer microstructures, mass customization, and efficient material usage [7].

They are the high-entropy effect, sluggish diffusion effect, lattice distortion effect, and cocktail effect. Moreover, a fine precipitate and a controlled grain structure are usually formed as a result of the sluggish diffusion effect. The effect suggests that the pair distribution function directly relates to the distribution of the interatomic spacing on a local atomic level [8]. The properties of HEAs are known to be a result of the overall contributions of the constituent phases influenced by phase shape, phase distribution, and boundaries, as well as the properties of each phase [9].

There is no doubt that the basis of HEA design revolves around these so-called core effects. Hence, most HEAs studied have been derived from these basic principles [10][11][12]. Nevertheless, the validity of these core effects has been doubted by some researchers recently.

This makes the prediction of processing–structure relationships quite a challenge. The design approach adopted by most researchers does not follow a specific logic; rather, a number of these alloys are a result of a trial-and-error approach. Although attempts have been made to categorize these alloys according to the intended application, there still exists a multitude of alloys exhibiting a wide range of properties. This paper will also try to establish a structure–property relationship and link it to the processing route used.

2. Microstructural Evolution of HEAs Synthesized through the Melting and Casting Route 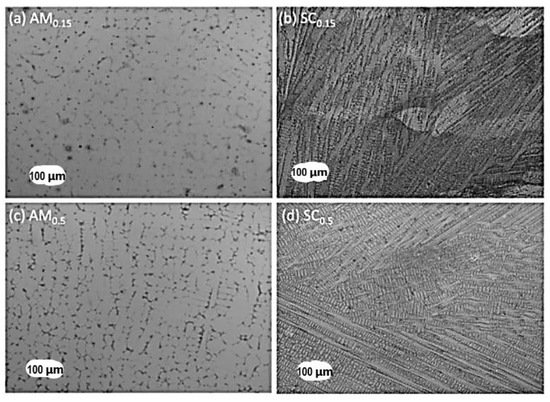 Figure 1. OM micrographs of arc-melting (AMx) and suction-casting (SCx) alloys (x = 0.15 and 0.5). (a) Columnar cellular structure and (c) non-equiaxed columnar dendrite by arc-melting; (b) and (d) columnar dendrite grains by suction casting [19].
Table 1. Phase evolution of HEAs fabricated using the melting and casting route.
From another perspective, HEA phase formation during fabrication via the melting and casting route is suggested to hinge on binary constituent pairs rather than individual constituent elements [66][67]. An HEA system such as the AlCoCrFeNi alloy forms a BCC structure after processing; although among the constituent elements, only Cr and Fe have BCC crystal structures. The AlNi pair, from the possible binaries in the AlCoCrFeNi system, serves as the primary crystal structure in the AlCoCrFeNi HEA. This is due to the similar lattice parameter between AlNi (0.28810 nm) and AlCoCrFeNi (0.289675 nm) [68][69]. In addition, AlNi has the largest negative enthalpy of formation among all the binary pairs in AlCoCrFeNi [70][71][72]. The AlNi binary pair stabilizes over a wide composition field from 1638 °C down to room temperature and can dissolve other constituent elements [73][74]. The other elements, therefore, dissolve into the primary lattice due to their chemical compatibility and mixing entropy effect [75]. During solidification, Cr having the highest melting point is the first element to solidify. Cr remains segregated from the liquid mixture up to 1350 °C at the equiatomic composition [76][77]. In contrast, Al has the lowest melting temperature and thus has the highest diffusivity during solidification. The effect of Al addition on 3d transition metal-based HEAs such as AlCoCrFeNi been studied [78][79][80]. The increasing quantity of Al promotes the formation of the BCC phase [80][81][82]. Moreover, Wang et al. [83] and Rogström et al. [84] observed that the AlCoCrFeNi HEA exhibits a spinodal microstructure of an A2 ((Cr, Fe)-rich) disordered solid solution and a modulated B2 ((Al, Ni)-rich) ordered solid solution. The A2 phase forms at temperatures below 600 °C, while the B2 phase forms at higher temperatures [83].
Some examples of HEAs that exhibit a single-phase FCC structure after melting and casting are the CoCrFeMnNi HEA structure [85][86], the AlxCoCrCuFeNi alloy system [87][88], the CoCrCuFeNi HEA [89][90], the FeCoNiCrCuO0.5Alx HEA [40], and the AlxCoCrFeNiTiy HEA [42][91]. The binary constituents in these HEAs encourage the formation of the FCC phase. In addition, the addition of elements such as Cu and Ti stabilizes the FCC phase [92][93]. In the AlxCoCrFeNi alloy system, the addition of Ti promotes phase evolution from the BCC to an FCC phase [72]. Furthermore, when Al in AlCoCrFeNi is replaced with Cu to form the CoCrCuFeNi alloy, the FCC phase forms instead of an A2 + B2 structure associated with AlCoCrFeNi. CuCo, CuNi, CoNi, FeNi, and CoFe, which make up the binary constituents in the CoCrCuFeNi alloy, all have an FCC structure and promote the FCC phase. In addition, the use of Mn to form CoCrFeMnNi also leads to a single-phase FCC structure [94].

3. Microstructural Evolution of HEAs Fabricated by Additive Manufacturing (AM)

AM has become a mainstream manufacturing process because of its flexible design optimization and processing advantages. The production of customized parts and the ability to control the microstructure in a specific site are possible in this processing route. The higher heating and cooling rates associated with AM promote chemical homogeneity in alloys by restricting diffusion to avoid undesired multiple phase transformations during cooling [95]. Solidification mainly takes place along the building direction and is predominantly epitaxial. The successive building process in thin layers by local heat input characterizes the microstructures as a result of rapid and directional solidification. Factors such as powder flowability, laser power, powder thickness and shape, scan spacing, and volumetric energy density (VED) all play an important role in determining the resulting microstructure in AM technology. Figure 2 below shows the schematic representation of additive manufacturing techniques. 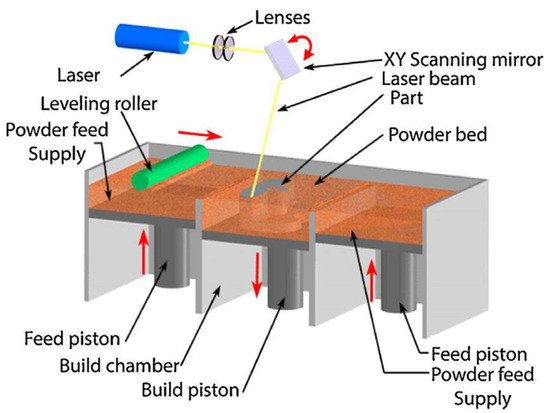 Figure 2. Schematic representation of additive manufacturing techniques [96].
Table 2 presents some HEAs fabricated using the AM route. The AlCrFeCoNi HEA system has also been synthesized by Kuwabara et al. [97] and Fujieda et al. [98] using the selective electron beam melting (SEBM) AM technique. The microstructure of the SEBM HEA exhibited a BCC and a B2 phase, same as that reported when processed through the melting and casting route, despite the rapid solidification of the SEBM process [99][18]. In addition to the BCC microstructure, an FCC phase was observed at the bottom of the SEBM-fabricated HEA. The precipitation of the FCC phase could have resulted from the BCC or B2 phase in a lower temperature range during building. Moreover, the phase evolution could have also occurred during the preheating process, which is associated with the SEBM AM technology. The coexistence of BCC and FCC phases in AlCrFeCoNi was confirmed when Ji et al. [100] fabricated the same HEA using the powder metallurgy (MA + SPS) approach.
Table 2. Phase evolution of HEAs fabricated using different additive manufacturing routes.

Large differences in the melting temperatures of the constituent elements due to compositional complexity result in elemental segregation, dendritic structure, and residual stress in HEAs fabricated using the melting and casting route. To address these discrepancies, the rate of cooling, differences in the local atomic arrangement, and the varying elemental diffusivity must be taken into consideration in future studies. Faster cooling routes such as suction casting, injection casting, melt spinning, or splat cooling suppress the precipitation of the secondary phase and thereby form a predominantly stable single-phase structure. Hence, induction remelting can reduce microsegregation, reduce the inhomogeneity challenge, and refine the grain size.

Most of the studies on HEAs fabricated by MA are focused on varying the milling duration in achieving a homogeneous solid solution of the elements. However, since the parameters of the MA process are not independent of each other, it is imperative to know that other parameters such as milling speed, the BPR, grinding media, and the milling environment are given some attention in future studies. These other parameters also significantly influence the heat generated during milling and the diffusion of elements in the solid solution process. A lower sintering temperature (depends on the melting temperatures of constituent elements) should also be considered.

There is no adequate information to better understand how, where, and why voids and porosity were formed in most AM-fabricated materials. More attention is needed in this area as controlling their distribution or avoiding them is crucial and requires a better understanding; hence, these defects are undesirable in certain engineering applications. Therefore, there is a need for the development and standardization of economically viable and printable materials for engineering applications in the AM fabrication technique spectrum to complement its processing advantages. Urgent attention is needed in developing computer-aided design tools and predictive models of both the printing process and the post-printing material properties in future studies.

[128], and more researchers have used the combinatorial approach in processing multicomponent alloys, more attention is still needed on this method owing to the possibility of exploring composition space. Thus, observations suggest that proper selection of the chemical composition and an appropriate processing route combined with appropriate thermomechanical treatment may offer an opportunity to manipulate the strengthening mechanism to enhance HEAs’ mechanical properties. An optimal composition with required properties could be more efficient. Therefore, more research with modeling and simulations is required, in addition to computational tools and integrated computational material engineering available.