Cardiovascular disease is the leading cause of death worldwide, and its prevalence is increasing due to the aging of societies. Atherosclerosis, a type of chronic inflammatory disease that occurs in arteries, is considered to be the main cause of cardiovascular diseases such as ischemic heart disease or stroke. In addition, the inflammatory response caused by atherosclerosis confers a significant effect on chronic inflammatory diseases such as psoriasis and rheumatic arthritis.

Cardiovascular disease is the leading cause of death worldwide, and its prevalence is increasing due to the aging of societies. Atherosclerosis, a type of chronic inflammatory disease that occurs in arteries, is considered to be the main cause of cardiovascular diseases such as ischemic heart disease or stroke. In addition, the inflammatory response caused by atherosclerosis confers a significant effect on chronic inflammatory diseases such as psoriasis and rheumatic arthritis. Here, we review the mechanism of action of the main causes of atherosclerosis such as plasma LDL level and inflammation; furthermore, we review the recent findings on the preclinical and clinical effects of antibodies that reduce the LDL level and those that neutralize the cytokines involved in inflammation. The apolipoprotein B autoantibody and anti-PCSK9 antibody reduced the level of LDL and plaques in animal studies, but failed to significantly reduce carotid inflammation plaques in clinical trials. The monoclonal antibodies against PCSK9 (alirocumab, evolocumab), which are used as a treatment for hyperlipidemia, lowered cholesterol levels and the incidence of cardiovascular diseases. Antibodies that neutralize inflammatory cytokines (TNF-α, IL-1β, IL-6, IL-17, and IL-12/23) have shown promising but contradictory results and thus warrant further research.

Cardiovascular disease is the leading cause of death in populations worldwide, and the prevalence of aging-related chronic diseases is increasing every year. According to a survey by the World Health Organization (WHO), 17.9 million people died due to cardiovascular disease in 2016, accounting for 31% of total deaths worldwide [1]. Of the cardiovascular disease-related deaths, 85% are caused by heart attacks and strokes, and the most significant cause of the two diseases is the blockage of blood vessels. Atherosclerotic lipid-laden plaques are the major etiology factors for blood vessel blockage, and as these plaques are stacked inside the sub-endothelial space (i.e., the intima), the walls of the vessel become narrow and physically interfere with the blood flow [2][3]. Since atherosclerosis is asymptomatic until the occurrence of remarkable phenomena, early detection is difficult. As such, the prognosis is poor in most cases, which directly links to the high mortality rates [2].
Yet, the currently available modes of treatment for atherosclerosis are limited to statin, ACE inhibitor, and β-blocker, among which statin is the most studied and used as first-line therapy [4]. Statin, which is used as a treatment for hyperlipidemia, functions by lowering the LDL levels; importantly, a meta-analysis of several randomized controlled studies on statin reported that statin reduced both the mortality from all causes and the incidence rates of atherosclerotic cardiovascular diseases [5]. This suggests that lipid is a critical factor in atherosclerosis.
Atherosclerosis has been considered to be caused by increases in cholesterol. The complexity of atherosclerosis and the involvement of various risk factors call for further research, but it is well-known that increases in cholesterol mark the beginning of atherosclerosis [6][7][8][9]. Increase in the concentration of LDL-C (low-density lipoprotein cholesterol) above the physiological need leads to the accumulation of LDL in the intima of the arteries and the development of atherosclerosis [10]. The lipid infiltrated into the intima becomes oxidized LDL (oxLDL) through oxidative modification and is engulfed by macrophages derived from monocytes to generate foam cells [11]. The form cells are held in the intima and their migration is inhibited, and thereby build up the lipid-rich center (necrotic core) of atherosclerotic plaques by being combined with cholesterol and apoptotic, necrotic cells (Figure 1) [12][13]. 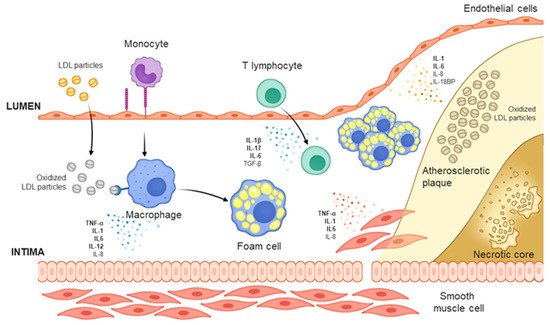 Figure 1. Mechanism of atherosclerosis formation.The development of atherosclerosis begins when low-density lipoprotein (LDL) particles infiltrate the intima layer and accumulate. Within the intima, LDLs form oxidized LDL (oxLDL) through myeloperoxidase and lipoxygenase, bind to the scavenger receptor of macrophage-derived foam cells, and activate the foam cells. Activated foam cells induce inflammation by secreting cytokines through several downstream signals. Concurrently, smooth muscle cells in the media layer migrate to the intima and are transdifferentiated into macrophage-like cells, and under the influence of the cytokines secreted from foam cells, secrete cytokines such as IL-6 to promote inflammation. In the intima, oxLDL increases the expression of adhesion molecules at the endothelial cell surface, leading to the recruitment of monocytes and other immune cells, and promote synergy with the aforementioned phenomena to induce the formation of atherosclerotic plaques.
Another key mechanism that drives the development of atherosclerosis is immune/inflammation [14]. Endothelial cells at the site of the accumulation of the modified lipoprotein express VCAM-1 (vascular cell adhesion protein 1), which functions as an adhesion molecule to recruit circulating monocytes and other immune cells [15]. All cells that contribute to the development of atherosclerosis—macrophages differentiated from monocytes, recruited leukocytes, and smooth muscle cells that migrated from the media to the intima—produce and secrete various cytokines, such as tumor necrosis factor (TNF)-α, interleukin (IL)-1β, and IL-6 to promote plaque growth [16]. Through the effects of several pro-inflammatory cytokines, atherosclerosis develops and the plaques are destabilized. Accordingly, a number of antibodies have been developed to specifically target and neutralize the pro-inflammatory cytokines that are involved in the development of atherosclerotic plaques (Figure 2). 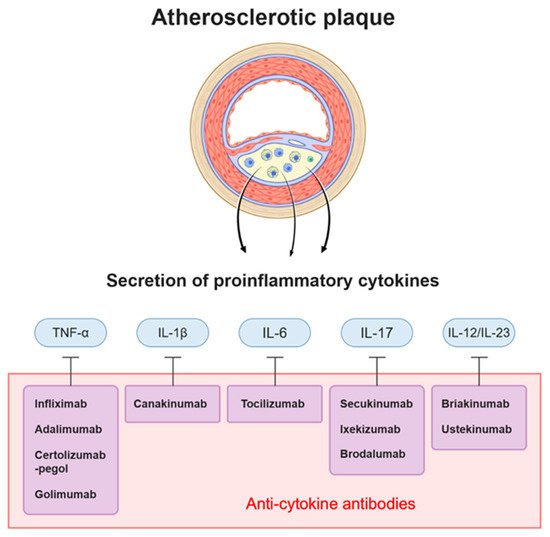 Figure 2. Antibodies targeting cytokines and cytokines acting on atherosclerotic plaque. Atherosclerotic plaque consists of lipid, apoptotic cells, immune cells, smooth muscle cells, and endothelial cells. These cells induce inflammation by secreting specific cytokines. Among them, IL-1β, TNF-α, IL-17, IL-6, and IL-12/23 are under investigation as therapeutic targets for atherosclerosis, and a number of antibodies have been developed to target each cytokine.
Along with the aforementioned pathogenesis studies on atherosclerosis, many pharmacological and clinical studies have been carried out [17]. This review will focus on the studies of antibody-based treatments targeting LDL and pro-inflammatory cytokines (Table 1). Therapeutic antibodies are stable molecules to be used as targeting reagents. They have an ability to bind to target proteins with high specificity and affinity. Despite of several limitations including unclear mode of action, inefficient tissue penetration and impaired immune reactions, current technological advances in antibody engineering have enabled the successful translation of antibody drugs to the clinic [18][19]. Currently, more than 79 antibody drugs are approved by the United States Food and Drug Administration (US FDA), and more than 570 antibody therapies around the world are under study [20]. Development of antibody drugs against pro-atherosclerotic factors also will play a major role in the treatment of cardiovascular diseases and inflammation.
Table 1. Summary of antibody based clinical trials.

This review summarized the mechanisms of action of antibody-based treatments targeting LDL and cytokines, which are the major causes of cardiovascular disease and atherosclerosis, and their results in recent clinical trials. The results of antibody therapy are ambivalent, with some cases showing significant alleviation of symptoms and others experiencing adverse events such as the aggravation of cardiovascular diseases. Antibodies targeting IL-17a and IL-12/23 also acted as pathogens in some cases, and briakinumab was withdrawn from the market due to increases in MACE. Therefore, it is important to monitor the side effects of new antibody therapies in terms of cardiovascular disease. Delineating the exact mechanism of action of the target molecules would be very helpful in overcoming the side effects or applying the appropriate treatment according to the situation and environment of each patient. In addition to the antibodies mentioned in the text, development and clinical trials of antibodies that inhibit a variety of molecules continue, such as ANGPTL family, CD47, CD31 [24][25][26][27]. Through these efforts, more targets will be found in the future, and mediators such as specific antibodies will be developed and eventually lead to the conquering of many diseases.