Efficient water remediation methods towards the extraction of 137Cs are being studied. Prussian blue (PB) and its analogs have shown very high efficiencies in the capture of 137Cs+ ions.

Prussian blue (PB) is a dark blue pigment synthesized by ferrous ferrocyanide salts with chemical formula Fe7(CN)18. It has a porous structure with the capacity to adsorb the 137Cs+ ions into its pores and store them there. It is a metal organic framework (MOF) where the inorganic vertices, which donate electrons in the structure, are linked to each other via organic compounds. The complete chemical formula is FeIII4[FeII(CN)6]3·xH2O. The compound has a face-centered cubic structure (FCC) structure (Figure 1) belonging to the Fm3̅m space group with a lattice parameter of 10.166 Å. Fe exists in two oxidation states within the structure: Fe3+ and Fe2+. These ions form two different FCC lattices displaced by half a lattice parameter with respect to each other. However, the bi and tri-valent Fe are coordinated differently. Furthermore, they are linked to each other via cyanide groups (C ≡ N) i.e., C groups are linked to Fe2+ and N groups to Fe3+ with high and low spins respectively, in octahedral configurations. The Fe2+ and Fe3+ ratio of 3:4 implies that in order to obtain a charge neutrality within the structure a 25% vacancy of [Fe+2(CN)6]4− molecules is necessary [1]. Coordinated water molecules occupy the resulting octahedral cavities created by such vacancies; six water molecules are linked to Fe2+. The other interstitial water molecules occupy the eight corners of the unit cell (¼, ¼, ¼) and are essential for the insertion of the 137Cs+ ions in the structure.

Fe+2 can be replaced by other transition metals with the same +2 oxidation states such as Ni, Mn, Cu and Co, coordinated exactly like Fe+2 in the structure and are called PB analogs. However, there are reports of Cd and Zn with slightly larger atomic radii also being incorporated into the structure owing to their +2 oxidation state [3]. The aim in including different species into the structure is to provoke a distortion of the PB lattice by producing vacancies of the high spin state molecule along with distortions in the vacant cages, in order to facilitate the capture and sequestration of the 137Cs+ [4].

The compound is insoluble in water and the basic mechanism consists of ion exchange of 137Cs+ and H+ with the former occupying hydrophilic vacancies [5]. PB analogs have very different mechanisms of ion exchange or capture depending upon the anionic and alkali metal cation concentrations. Since PB and its analogs contain large amounts of interstitial and coordinated water, 137Cs+ is captured by a defect created by a [Fe+2(CN)6] vacancy, which creates a spherical cavity whose size is equivalent to the hydration radius of 137Cs+. Nevertheless, recent calculations have demonstrated that a completely dehydrated 137Cs+ ion can be incorporated into the structure with the release of a water molecule from the interstitial sites [6]. This is similar to certain clays, where on dehydrating the interlayers the 137Cs+ selectivity increases [7]. On the other hand, water soluble analogs such as metal hexacyanoferrates (HCF) consisting of a alkali metal cation with a [Fe+2(CN)6] anion, used for the extraction of 137Cs+ have shown less efficiency. In such compounds Na+ or K+ are incorporated during the synthesis of the MOF in order to render them water-soluble [8]. In addition to 137Cs+ capture mechanisms for non-soluble analogs; the water-soluble analogs mainly depend on the Na+ or K+ ion exchanges with Cs+. Takahashi et al., have studied the 137Cs+ uptake in KCuHCF PB analog in order to understand their lower adsorption capacity [8]. Three main mechanisms governed the 137Cs+ ion exchange according to them, with the 137Cs+-K+ ion exchanges being predominant, as also stipulated by other research groups. In case of low anionic vacancies, the percolation of 137Cs+ through the vacancies was prevalent. Finally, for low K+ incorporation in the structure, proton exchange between 137Cs+ and K+ ions was evidenced. Ayrault et al., report a degradation in the crystal structure of the KCuHF soluble compound after 137Cs+ adsorption which was not observed in the non-soluble counterpart [9].

137Cs+ adsorption in PB crystals is a very slow process. Fujita et al., have demonstrated that after two weeks of adsorption experiments, the depth of 137Cs+ adsorption was at most between 1–2 nm, irrespective of the crystal size [10]. This implies that most of the adsorption occurs on the surface of the crystallites. This low diffusion depth is mainly attributed to the blocking of the vacancies by captured 137Cs+ ions, which in turn hinders further 137Cs+ diffusion. Since the diffusion depth appears to be a constant, increasing the specific surface would therefore be a solution to increasing the 137Cs+ uptake. One way of augmenting the specific surface is by synthesizing nanoparticles of PB. The surface to volume ratio of crystallites increases as their size decreases; therefore nanoparticles have an extremely large surface to volume ratio. For example, a 3 nm nanoparticle will have 50% of its atoms on its surface. This would also imply that in the case of PB nanocrystals most of the vacancies and sites responsible for 137Cs+ adsorption would be available on the surface, thus enhancing its specific surface. To this end, different research groups have produced various PB analogs of type Metal(M)-Co, where the nature of M defines the efficiency of the uptake. Liu et al., have demonstrated that Zn assisted Fe-Co PB analogs present high 137Cs+ uptake efficiency [11]. They also observed that the size of the PB analog particle reduced with the reduction of Fe in the structure; for pure Zn-Co analogs, a crystallite size of ~73 nm was calculated, displaying the highest 137Cs+ adsorption as depicted in Figure 2. 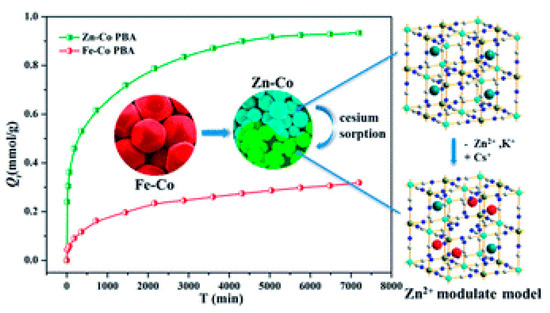 Figure 2. Adsorption efficiency of Fe-Co and Zn-Co prussian blue (PB) analogs as a function of time. The Zn-Co PB analog exhibits a higher Qt (Qt is the adsorption capacity per unit gram of the sorbent at a given time t) owing to the reduction in size of the nanoparticles. Adapted from [11] under the Creative Commons agreement from RSC, 2017.

Considering that the 137Cs+ adsorption depth is only about 1–2 nm, hollow PB nanoparticles may offer many more advantages. They not only have a very active surface area due to their large surface to volume ratio but their hollow interior is also capable of capturing and storing 137Cs+ [12]. A surfactant polyvinylpyrrolidone (PVP) was used to stabilize the nanoparticle and increase their dispersion in aqueous solutions. Figure 3 compares the efficiency of solid and hollow PB cubes of ~200 nm, in the capture of 137Cs+. The elemental mapping of Figure 3B depicts a higher concentration of captured 137Cs+ ions within the hollow structures than the filled ones in Figure 3A. Nevertheless, 137Cs+ diffusion depth greater than 2 nm would require higher activation energy at room temperature. Other methods are required to determine the exact diffusion depth in such structures, as these results are mainly qualitative. Besides, it is well known that the use of a surfactant shields the active sites and prevents the capture of 137Cs+. In order to avoid such shielding effects, PB could be coated onto support materials instead through hydroxyl bonds that anchor the PB to the support material. Carboxylic groups also tend to immobilize the PB particles in a sturdier manner. Wi et al., used a polyvinyl support surface functionalized with acrylic acid. This allowed converting the OH groups to COOH and providing a better adhesion of the PB [13]. The PB nanoparticles were immobilized on the PVP sponge and an increase in 137Cs+ uptake efficiency by five times was reported, compared to the hydroxyl bond functionalization.

There are reports of photo-induced magnetism where an electromagnetic radiation induces a residual magnetization even after the excitation is turned off, [14] due to low and high spin combinations of the transition metals in PB analogs. On their own, PB and its analogs exhibit ferromagnetism at a Curie temperature of 11 K with a saturation magnetization of 3.4 emu/g as obtained by Tokoro et al., for Mn-Rb-Fe PB analogs [15]. The presence of Mn in the structure creates a Jahn-Teller distortion [16] by changing the M–CN–M bond angle and deviating it from 180°, whereupon inducing ferromagnetism. Among the various PB analogs, Mn based ones have shown the highest saturation magnetization [17]. One method of decreasing the Curie temperature of PB is by synthesizing nanoparticles of PB. Uemura et al., have demonstrated a decrease in Tc from 5.5 K in bulk PB to 4 K for PB nanoparticles protected by PVP [18]. Nevertheless, finding practical applications involving magnetic extraction would require having a Tc at around room temperature. Also, humidity increases the Curie temperature for Co-Cr PB analogs, [15] thus making it difficult for their direct application in aqueous media. This implies that most methods using PB for 137Cs+ extraction, do not prescribe any efficient approach to recover the exhausted adsorbent.

Core-shell structures with the magnetite constituting the core and the PB active layer constituting the shell have been employed. Jang et al., have reported that the poly(diallyldimethylammoniumchloride) (PDDA)@Iron oxide nanoparticles can act as nucleation sites for the precipitated PB, resulting in the coating of a negatively charged PB on the PDDA@Iron oxide nanoparticle surface [20]. Furthermore, they have also studied the magnetic properties of Fe3O4 and have observed a decrease in the saturation magnetization from 56 emu/g for pure Fe3O4 to 12 emu/g for the PB-Fe3O4 nanocomposite. The reduction was mostly due to the shielding of the superparamagnetism of Fe3O4 by the PB capping. Nevertheless, successful magnetic extraction was achieved with the nanocomposite [21]. PB analog compounds tend to show degradation in various applications after successive cycles of reuse. Chang et al., Figure 4A, have synthesized Fe3O4 (shell)-PB (core) nanocomposites with sizes between 20–40 nm; [22] two different concentrations of FeCl3 were used during the synthesis. The higher Fe concentrations produced Fe3O4 cores with a higher magnetic saturation moment (Figure 4B), which conversely had an adverse effect on the 137Cs+ adsorption due to the higher shielding of the active sites in the PB core as depicted in Figure 4C.

Some researchers have also used different ferrimagnetic nanoparticles like CoFe2O4 combined with PB for the extraction of cesium and have indicated very high efficiencies compared to pure CoFe2O4, which has some interesting 137Cs+ adsorption capacity by itself [23]. CoFe2O4 possesses the spinel structure and tends to be physically more robust but is a hard magnetic compound compared to Fe3O4. The latter is a soft magnet with a very small residual magnetization and can therefore be used in successive cycles of extraction.