Cellular cancer vaccines are among the first types of cancer vaccines to be tested [1]. They use a straightforward approach based on the well-known principle of vaccination: vaccinate with what you want to develop protection against. Cancer cells are typically irradiated, combined with an immunostimulatory adjuvant, and then administered to the patient, usually from whom the tumor cells were isolated [2][3][4][5]. Such vaccines have undergone extensive scientific research and have been widely tested in various cancers, including lung cancer [5][6][7], colorectal cancer [3][8][9][10], melanoma [11][12][13], renal cell cancer [14][15][16], and prostate cancer [2]. The significant possibilities of such vaccines have been described, but none have yet passed the clinical trial stage. It can be argued that antigenic essence technology is the revitalization of cellular vaccination, as antigenic essence exhibits all the identifying properties of cancer cells while also allowing for control of composition, purification from ballast substances ("cellular noise"), and evasion of MHC restrictions. Therefore, antigenic essence technology allows for the application of already discovered cellular compositions, while overcoming their limitations.

The first assumption of antigenic essence is that only antigens presented on the surface of the cell are targets for vaccination, while those presented inside the cell can and should be neglected. This is based on the fact that only antigens on the cell surface are available to the immune system; the plasma membrane of living cells is impermeable to cytotoxic elements of the immune system that recognize antigens, be they antibodies or T lymphocytes. This does not contradict the fact that some intracellular antigens can be presented by MHC on the cell surface and offer suitable targets for vaccination; indeed, some such antigens are currently undergoing clinical trials. On the other hand, extracellular antigens are produced inside cells and can therefore always be found there as well. The point is not where the antigens can be found, but that they function as targets for the immune system only when presented on the cell surface. That is, the target pool of antigens is located precisely on the cell surface, and they form an actual profile of the antigenic properties of living cells.

Given that the target pool of antigens is presented on the cell surface and the cell wall is impermeable to macromolecules, the second assumption of antigenic essence is that the target pool of antigens can be collected by treating living cells with protease (Figure 1). Despite the apparent simplicity of this approach, this is not a trivial process, and the implementation in mammalian cells became possible only with advances in proteomics. When a highly purified protease is used, cytolytic activity is low [17], thus allowing the treatment of live cells without violating the permeability of their membranes. The use of proteomics-grade protease makes it possible to obtain just the pool of antigens from the cell surface without contamination by intracellular content. Furthermore, the obtained antigens are not overridden by impurities or autolytic fragments of the protease itself [17]. Last but not least, the obtained antigens can be analyzed by mass spectrometry to establish essence composition, and this information can be used to fine-tune the design of cancer vaccines and validate their quality.

Figure 1. Concept of antigenic essence. The actual antigenic properties of live cells are defined by a pool of antigens presented on the cell surface. Intracellular content is considered noise to be excluded from the antigenic essence. After washing away traces of the culture medium, cells are treated with a purified protease. Released fragments of the cell surface proteins are collected, analyzed by mass spectrometry, and used for vaccination instead of whole cells.

To confirm that antigenic essence retains the antigenic properties of live cells, its cytotoxic properties were compared with those of whole cells. In cytotoxicity assays, target human adenocarcinoma cells (MCF-7) were incubated with human cytotoxic T lymphocytes (CTLs) stimulated with antigen-presenting cells (APCs) loaded with either essence or whole cancer cell lysate. The essence was 10–40% more effective at killing target cells than the whole-cell lysate. This was accomplished using less than 1% of the total amount of protein (2 μg/mL of essence vs. 270 μg/mL of whole-cell lysate) [18]. The complete retention of cytotoxicity combined with a dramatic reduction in protein used indicates that the essence is free from superfluous intracellular content and preserves all the antigenic properties required for targeting by the immune response. These results, together with a similar result reported for non-cancer cells in another study [19], confirmed the conceptual assumption that proteolytic treatment of living cells allows the collection of a complete set of antigenic targets; that is, the antigenic essence of cells.

Antigenic essence is a product of cell culture technology, which involves a high probability of misidentification and cross-contamination between cells [21][22][23][24]. Moreover, cultured mammalian cells have a finite lifespan [25][26] and are subject to progressive degeneration, which is manifested in part by changes in the molecular composition of the cell surface [27][28]. Accordingly, cultivated cells intended for therapy must be authenticated and the composition of their antigenic essence validated to exclude unwanted changes in their composition.

The proven method for analysis and control of essence composition is mass spectrometry. This method is known as a proteomic footprint and represents a proteomics method for both the authentication and characterization of cells at the subtype level [29] as well as analysis of essence composition. By comparing the mass spectrum of the essence with that of the reference cells, the origin of the essence can be easily authenticated and its composition verified for vaccination (Figure 2). Moreover, discrepancies in this comparison would reveal any changes in antigen composition that may have occurred. 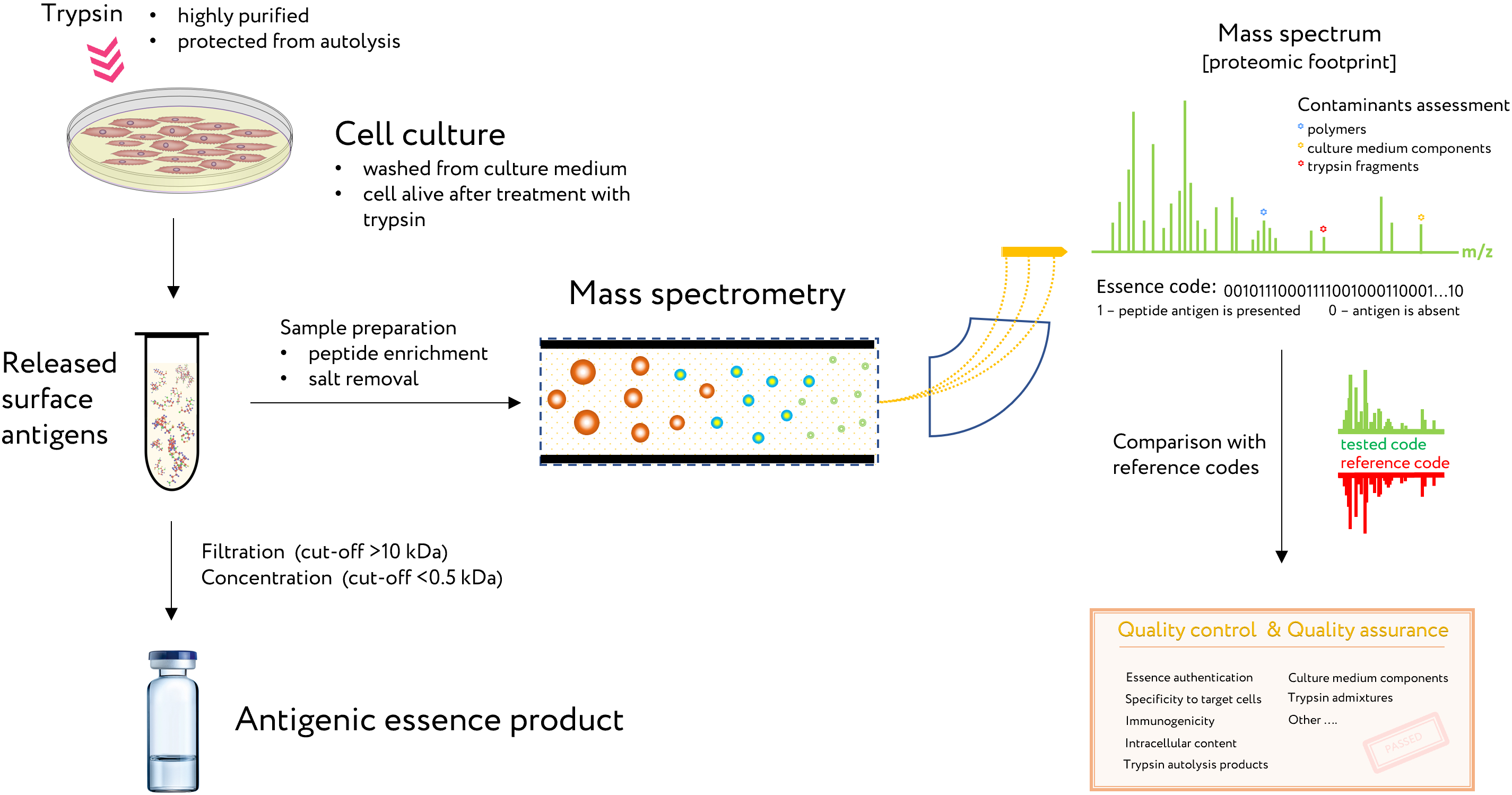 Figure 2. The use of proteomic footprinting in the antigenic essence production. After washing away traces of the culture medium, adherent cell culture is treated with a protease. Released fragments of cell surface proteins are collected and analyzed by mass spectrometry. The set of obtained peptide molecular weights represents the essence code. Comparison of this code with mass spectra of the reference cells not only allows for authentication of the essence but also reveals any changes in its composition. This proteomic footprinting method was developed as a part of R&D for antigenic essence products and cell authentication at the subtype level.

CTLs are specialized and effective elements of the anti-tumor immune response. CTLs directly lyse target cells and also secrete cytokines (e.g., granulocyte-macrophage colony-stimulating factor, tumor necrosis factor, and interferon-gamma), which further amplify immune reactivity against target cells [30][31][32]. It is well established that CTLs recognize antigens in the form of small peptides. Native whole antigens are internalized and proteolyzed by APCs, and then short peptides are presented to CTLs on the APC surface with MHC (8–12 amino acid residues in length for MHC class I, and 11–30 residues in length for MHC class II) [33].

From this point, the antigenic essence compositions are ideally suited for presentation to CTLs by MHC. While MHC class I peptides contain on average 10 residues, proteins have in their sequence an average of one trypsin cleavage site per 10 residues. This coincidence is not accidental: antigenic essence arose from proteomics technologies, in which protein cleavage with trypsin is used to produce specific peptide fragments for protein identification (known as peptide fingerprinting). Smaller fragment sizes (i.e., less than 10 residues) result in less specificity. MHC class I likely presents peptides of a similar size because they are optimal for identification. These common fundamentals of proteomics and immunology have supported the design and production of antigenic essence products, in which protein cleavage with trypsin plays a central role. Notably, partial cleavage of proteins by trypsin produces larger peptides, which are also included in the antigenic essence and well-suited for presentation by MHC class II.

To date, tumor antigens successfully presented to CTLs have been identified by various methods  [34][35][36][37][38][39]. In most cases, CTLs derived from cancer patients were used to screen either expression gene libraries or peptides eluted from tumor cell MHC molecules. Most of these CTLs were derived from patients with a particular tumor, and as a result, the majority of defined antigens were restricted to this tumor indication. Later, an alternative approach was developed that did not require the use of patient CTLs, but instead relied on the identification of MHC-binding peptides and on novel in vitro priming protocols [40][41][42]. Specifically, peptides selected for their binding capacity to MHC molecules were tested for their ability to elicit tumor-reactive CTLs in vitro using lymphocyte cultures from normal individuals. Following this approach, several TAAs presented to CTLs were identified for melanoma tumors [43][44]. Furthermore, this approach was successfully used to identify antigens expressed in solid adenocarcinomas (including MAGE2, MAGE3, carcinoembryonic antigen (CEA), and HER-2/neu) [45][46][47]. These results are relevant for the development of epitope-based immunotherapy of high-incidence tumors such as breast, lung, colon, and gastric carcinomas [48]. In vitro priming of CTLs from normal individuals is a useful tool for the development of dendritic cell vaccines. Such an approach has been used in an in vitro study of dendritic cells (DCs) ability to present antigens to CTLs, a process in which MHC is directly involved.

In this equation, N is the number of total viable target cells in cytotoxicity assays (representing the inverse of CTL cytotoxicity), k and b represent a contribution to the immune response independent of essence/target similarity (i.e., r value). This contribution is referred to as antigenic essence immunogenicity influenced by MHC restriction. In the final antigenic essence compositions, these parameters should be fine-tuned to strike a balance in essence/target similarity and essence immunogenicity.

Developed to date classical cancer vaccines, which operate on the principle that you should vaccinate with what you want to develop protection against, include whole-cell formulations. Such vaccines have been widely tested in various cancers and their advantages are described but such vaccines have not passed clinical trials due to lack of effectiveness. Antigenic essence technology offers the possibility to revitalize the field of whole-cell-based vaccination. In such vaccines, whole cells just may be replaced by antigenic essence obtained from the same cancer cells.

In addition to all the advantages described above that antigenic essence gives during vaccination, some other advantages of such upgrade of vaccines should be mentioned. Since antigenic essence is acellular formulation, such upgraded vaccines will have undeniable advantages concerning safety. They are free of any cells and supramolecular formations. The production process excludes the presence of bacteria, viruses, protozoa, as well as prions and other foreign proteins (e.g., bovine proteins from the culture medium). Thus, they are less likely to cause infection or allergic reactions. This aligns with current guidance regarding the development of new cancer vaccines with enhanced safety and tolerability profiles [55] and simplifies the implementation of Food and Drug Administration (FDA) requirements [56]. The absence of side effects will significantly reduce the door-to-needle time, which is extremely important for mass vaccination and has been a significant limiting and price-forming factor of cellular vaccines.

A significant simplification in the transportation and storage of upgraded vaccines is expected in comparison with their cellular analogs. Storage and transportation of cell preparations are usually carried out in liquid nitrogen with cryoprotectant, which is labor-intensive, and the defrosting of cells is typically associated with massive cell lysis. Antigenic essence, being a peptide preparation, requires ultra-low temperatures only during long-term storage [57], and in general, can be frozen normally or, as a lyophilizate, stored at low temperatures (+4–8 °C) and transported at room temperature.

Radical simplification in transportation and storage, increased safety, and decreased door-to-needle time will undoubtedly lead to a radical reduction in the cost of upgraded vaccines. The cost of upgraded vaccines will also be affected by the near-absence of cellular material consumption during their production. A single set of cells can be reused to generate multiple batches of antigenic essence due to the regeneration of cells after treatment with protease [58]. Thus, virtually any dose can be generated without wasting cellular material, which is important for the mass production of affordable cancer vaccines. A notable exception to this is perhaps in upgraded vaccines obtained from primary cultures where long-term cultivation of cells without degeneration of their molecular phenotype is impossible.