Prostate cancer (PCa) represents a major cause of cancer mortality among men in developed countries. Patients with recurrent disease initially respond to androgen-deprivation therapy, but the tumor eventually progresses into castration-resistant PCa; in this condition, tumor cells acquire the ability to escape cell death and develop resistance to current therapies. Thus, new therapeutic approaches for PCa management are urgently needed. In this setting, natural products have been extensively studied for their anti-PCa activities, such as tumor growth suppression, cell death induction, and inhibition of metastasis and angiogenesis.

Globally, prostate cancer (PCa) is the most frequently diagnosed tumor in men, being particularly common in Western countries [1]. In about 90% of cases, PCa is still organ-confined or only locally advanced at diagnosis, which makes it effectively treatable with prostatectomy or local radiotherapy. However, 30–40% of patients usually experience progression of disease [2]; at this stage, where tumor growth depends on androgens, the most effective treatment is represented by androgen-deprivation therapy, aimed at blocking hormone secretion and/or activity. This therapy is based on pharmacological castration, obtained by administration of GnRH agonists, alone or in combination with antiandrogens [3][4]; more recently, two major clinical trials, CHAARTED and STAMPEDE, have also demonstrated benefits of early initiation of chemotherapy concomitantly with hormonal therapy [5][6]. However, despite a good initial response, relapse occurs in the majority of patients within 2–3 years, and the tumor progresses towards a condition of resistance to castration [7]. Improved therapeutic options for castration-resistant patients are needed, since taxane-based (i.e., docetaxel) treatment and immunotherapy, as well as the novel therapies with enzalutamide and abiraterone, generally offer a progression-free survival of a few months [8][9]. Parallelly, bone metastases, occurring in 80% of advanced PCas and usually treated with radiation therapy and chemotherapy, are associated with considerable morbidity, adversely affect quality of life and several skeletal-related events [4][10]. Therefore, in the last years natural compounds have gained a lot of interest, due to their various anti-cancer effects. In fact, accumulating evidence has highlighted that nutraceuticals can exert growth-suppressing, pro-death, anti-metastatic, and anti-angiogenic activity in PCa cell lines and xenografts, while sparing normal prostate epithelial cells [11]. In particular, several mechanisms are involved in the anti-PCa actions of these molecules, including inhibition of androgen receptor (AR) axis and targeting of cancer stemness [12][13].

Data from literature have pointed out that several natural products can selectively target numerous molecules and signaling pathways implicated in tumor development and progression [11][12][13]. Many of them have been tested in in vitro and in vivo studies, while some clinical trials have been conducted or are currently ongoing [11][12][13]. Among these naturally occurring molecules, quercetin, fisetin, luteolin, apigenin, curcumin, resveratrol, genistein, silibinin, kaempferol, epigallocatechin-3-gallate (EGCG), tocotrienols, sulforaphane, ginsenosides, ursolic acid, berberine, honokiol, xanthoumol, oridonin, and tannic acid have shown outstanding potential as anti-PCa agents in in vitro and preclinical experiments (Figure 1). 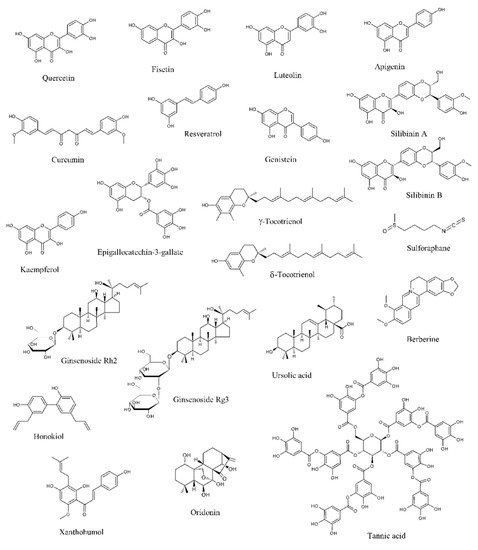 Numerous natural compounds have been reported to exert growth-suppressive and anti-proliferative activities in PCa cells and xenografts.
Epidermal growth factor receptor (EGFR) is a receptor tyrosine kinase whose activation is associated with an increase in cell growth and survival, which explains why EGFR is commonly overexpressed/overactivated in tumors of epithelial origin, including PCa. In particular, after binding to its specific ligands, such as EGF and transforming growth factor α (TGFα), it triggers several downstream signaling pathways, including PI3K/Akt/mTOR, mitogen-activated protein kinases (MAPKs), Hedgehog (Hh) signaling, and NF-κB [76]. Many phytochemicals, including quercetin, luteolin, resveratrol, genistein, and berberine, have been shown to reduce EGFR levels, as well as to suppress its intrinsic tyrosine kinase activity and its ligand-induced activation, in different PCa cell lines and in vivo models [77][78][79][80][81].
The IGF axis is a complex signaling network implicated in different tumorigenic processes, particularly in cancer proliferation, survival, and metabolism. It involves the interaction between the peptide-ligands IGF1 and IGF2 and the receptors IGF1R and IGF2R, and its activation elicits downstream signals, such as the PI3K/AKT and the MAPK pathways [82]. Interestingly, the IGF axis represents a major target for the anti-PCa action of silibinin, a flavonoid endowed with antioxidant properties commonly found in the milk thistle (Silybum marianum) [83][84]. Indeed, it decreased IGF1 expression and increased IGFBP-3 levels in transgenic adenocarcinoma of the mouse prostate (TRAMP) models, thus inhibiting tumor growth and progression [85][86][87]. Similar results were also obtained after treatment of PCa-bearing mice with luteolin [88].
Emerging evidence has highlighted the key role played by the PI3K/AKT pathway in the development of castration resistant PCa. This cascade, which is activated in most of advanced PCas, acts as a fundamental driver for tumor cell proliferation, thereby allowing cancer cells to survive to the androgen deprivation-related cytotoxicity. Moreover, preclinical studies have highlighted a strict correlation between the PI3K/AKT and AR axes, evidencing a dynamic cross-talk between these cascades in the acquisition of androgen-deprivation therapy resistance. Therefore, there is an evident rationale for the development of novel PI3K inhibitors, which may be able to block castration-resistant PCa growth and survival [89]. In this setting, the interest in natural products has recently increased, due to their ability to specifically target the PI3K/AKT cascade. In particular, quercetin, apigenin, curcumin, genistein, sulforaphane, and EGCG have been demonstrated to attenuate PCa cell growth by downregulating this signaling pathway [90][91][92][93][94][95][96][97][98].
During PCa progression, both tumor invasion and chemoresistance are promoted by NF-κB. Indeed, constitutive activation of this protein has been commonly found in primary PCas and it is associated with AR loss and castration-resistant features. Thus, NF-κB is an important target for PCa management, owing to its role in tumorigenesis and therapy resistance [99]. Notably, downregulation of this protein and of its target genes has been highlighted after resveratrol, genistein, sulforaphane, ursolic acid, tocotrienol, and celastrol treatment [100][101][102][103][104][105].
Hh pathway activation is implicated in the development of different types of tumors, including PCa. In particular, many studies have pointed out that this signaling plays a crucial role in the progression of PCa to more aggressive and chemoresistant states [106]. Slusarz et al. demonstrated that seven common nutraceuticals, (i.e., genistein, curcumin, EGCG, resveratrol, apigenin, baicalein, and quercetin) can suppress the Hh pathway both in vitro and in vivo, with four of them (i.e., genistein, curcumin, resveratrol, and EGCG) decreasing not only Hh effector Gli1 expression but also Gli1 reporter activity [107].
Genome sequencing and gene expression analyses have evidenced the importance of the Wnt pathway in the development of castration resistant PCa [108]. Wnt signaling is also implicated in the cross-talk with the PCa microenvironment, where this protein is secreted by the tumor stroma and promotes therapy resistance, as well as in PCa stem cell self-renewal or expansion [109]. Preclinical studies have illustrated the potential of Wnt inhibitors in preventing PCa progression. Some of them have already been tested in phase I trials, although they have not been administered to PCa patients yet [108][109]. Interestingly, treatment of PCa cells with quercetin, curcumin, genistein, and silibinin resulted in growth suppression through Wnt cascade modulation [110][111][112][113].
MicroRNAs (miRNAs) are endogenous, ≈22 nucleotides, non-coding RNAs able to induce both transcriptional and translational arrest, thus functioning as either oncogenes or oncosuppressors, depending on the specific tumor type [114]. Concerning PCa, genistein has shown promise in modulating the levels of different oncogenic (i.e., miR221, miR222, miR151, and miR1260b) and oncosuppressor (i.e., miR-574-3p and miR34a) miRNAs, thus affecting cancer cell proliferation [115][116][117][118][119][120]. Similar encouraging data were also obtained from in vitro studies with luteolin, curcumin, resveratrol, ginsenoside Rh2, and celastrol [121][122][123][124][125][126].

Apoptosis is commonly induced in PCa cells and xenografts treated with phytochemicals. In particular, many natural products have been found to trigger both the extrinsic and intrinsic apoptotic pathways, by activating cell surface death receptors, altering Bax/Bcl-2 ratio, increasing p21 levels and triggering caspase-8, -9, -3, and poly (ADP-ribose) polymerase (PARP) cleavage [127][128][129][130][131][132][133][134][135][136][137][138][139][140][141][142][143][144][145][146][147][148][149][150][151][152][153]. In this setting, proteostasis disruption appears to play a key role in the modulation of the nutraceutical-related apoptotic cell death. Indeed, while apigenin, luteolin, genistein, and celastrol inhibited the proteasomal activity and caused ubiquitinated protein accumulation in different PCa cell lines [154][155][156], quercetin, curcumin, silibinin, and tannic acid induced endoplasmic reticulum (ER) stress [157][158][159][160], a condition where unfolded/misfolded proteins accumulate in the ER lumen and promote the activation of distinct pro-death cascades, including the double-stranded RNA-dependent protein kinase PKR-like ER kinase (PERK)/eukaryotic initiation factor 2α (eIF2α)/activating transcription factor 4 (ATF4)/C/EBP homologous protein (CHOP) pathway and the inositol-requiring enzyme 1α (IRE1)/c-Jun N-terminal kinase (JNK)/p38 MAPK cascade [161]. Notably, curcumin- and silibinin-mediated ER stress was associated with generation of reactive oxygen species (ROS) and redox homeostasis alteration [159][162], which were also observed in resveratrol- and sulforaphane-treated PCa cells [163][164][165][166].
Interestingly, apoptotic cell death is not the only death mode triggered by natural compounds.
Berberine is a benzylisoquinoline alkaloid commonly found in the plants of the genus Berberis [167][168]. In a recent study by Zhang et al., it was shown to induce programmed necrosis in LNCaP and PC-82 PCa cell lines. In particular, mitochondrial protein cyclophilin-D (Cyp-D) was observed to be crucially involved in the modulation of berberine-related necrotic cell death. Indeed, berberine treatment resulted in ROS production, which promoted p53 translocation to mitochondria and its interaction with Cyp-D to open the mitochondrial permeability transition pore (mPTP), ultimately leading to necrosis induction [169]. Pro-necrotic effects were also exerted by curcumin in DU145 cells [170].
Paraptosis is a programmed cell death mode characterized by cytoplasmic vacuolation, particularly by ER dilatation and mitochondrial swelling [171][172]. Recently, we have demonstrated that δ-tocotrienol, a vitamin E derivative particularly abundant in annatto seeds, rice bran, and palm oil [173][174], can trigger both apoptosis and paraptosis in PC3 and DU145 cell lines. The mechanisms underlying its pro-paraptotic effects were found to correlate with activation of JNK and p38, as well as with proteotoxicity, since not only the protein synthesis inhibitor cycloheximide but also the ER stress inhibitor salubrinal successfully prevented the cytoplasmic vacuolation evoked by the treatment with this natural compound [175]. Similarly, paraptosis-like cytoplasmic vacuolation was also observed in celastrol-treated PC3 cells [176].
Autophagy is an evolutionarily conserved catabolic process generally used by the cell to eliminate cytoplasmic material, including misfolded proteins and damaged organelles, via lysosomal degradation: it involves the formation of double-membrane vesicles, the autophagosomes, that promote cytoplasmic cargo recycling after fusion with lysosomes, and it is regulated by different proteins, particularly by microtubule-associated proteins 1A/1B light chain 3B, commonly called LC3 [177]. It is now well known that autophagy can act as both tumor promoter and suppressor. The dual role of this mechanism in cancer cells apparently depends on tumor type, stage, and genetic context. Indeed, while on one hand the autophagic flux clearly suppresses tumorigenesis, on the other hand it acts as a key survival mechanism in response to stress, thus promoting cancer cell proliferation. In the context of PCa, curcumin, sulforaphane, silibinin, ursolic acid, honokiol, and oridonin triggered cytoprotective autophagy [178][179][180][181][182][183][184]; on the contrary, fisetin, resveratrol, and celastrol treatment resulted in autophagic cell death [185][186][187]. In particular, the fisetin- and resveratrol-mediated autophagic flux was associated with Akt/mTOR signaling pathway downregulation and AMP-activated protein kinase (AMPK) activation [185][186]. The autophagy induced by celastrol, a pentacyclic triterpenoid extracted from Tripterygium Wilfordi roots [188], was instead correlated to suppression of AR/miR-101 cascade [187].