2.1. Generic Structure of Inflammasome and Mechanisms of Pyroptosis

The inflammasome consists of an NLR (as a sensor protein), an ASC (apoptosis-associated speck-like protein containing a caspase recruitment domain (CARD), also known as pycard or the target of methylation-induced silencing-1 (TMS-1) as an adaptor protein), and pro-Casp1 (an inflammatory caspase) [16][17]. Inflammasome-forming NLRs have an N-terminal effector domain (i.e., pyrin domain (PYD) or CARD) that binds to ASC, a central fish-specific NACHT-associated domain and NACHT domain, and a C-terminal LRR motif that recognizes PAMPs, DAMPs, or environmental factors as ligands [6][9]. Several NLRs recruit the adaptor protein ASC (containing PYD and CARD) and pro-Casp1 to form a multiple-protein complex [16][17][18][19]. After recruitment of ASC and pro-Casp1, pro-Casp1 is self-proteolyzed into its active-form, Casp1 [13]. Casp1 is one of the proteases that cleaves the precursor inflammatory cytokines (i.e., pro-IL-1β and pro-IL-18) into their activated forms IL-1β and IL-18 [13][14][20]. Casp1 also cleaves gasdermin (GSDM) family proteins (i.e., GSDMA, -C, -D, and -E) at the N-terminus of GSDM, which then forms a pore in the cell membrane. Extracellular water then flows into the cell through the GSDM pore; thus, the cell expands. Eventually, the cell membrane is broken, leading to lytic cell death, known as pyroptosis [21][22]; moreover, at this point, cytosolic inflammatory molecules (including IL-1β, IL-18, HMGB1, and ATP) are released into the extracellular space [10][23][24][25]. In mammals, GSDMD induces pyroptosis in a Casp1-dependent manner [26]; however, there is no gsdmd in the fish genome. Current reports demonstrate that GSDME plays a key role in fish pyroptosis, as GSDMD does in mammals [27][28][29]. In zebrafish, CaspA (also known as CaspyA and Caspy) and CaspB (also known as CaspyB and Caspy2) [30], which are orthologs of Casp1, cleave the proinflammatory cytokines and two GSDMEs [27][29].

NLRs are components of the inflammasome, and they play a crucial role in recognizing PAMPs, DAMPs, and environmental factors [9]. In mammals, NLRs containing PYD (NLRP1), NLRP3, NLRP12, and CARD (NLRC4) are key sensory molecules in inflammasomes [13][31][32][33][34]. However, in teleosts, only NLRP1 and NLRP3 in zebrafish and NLRP3 in the Japanese flounder have been identified as inflammasome-forming NLRs [27][35][36]. Interestingly, Japanese medaka and zebrafish have many NLRs that belong to NLRC3 and NLRP12 families (67 in Japanese medaka and 43 in zebrafish) in the genome database, although most lack PYD or CARD, which are important in inflammasome formation [37] (Figure 1). In the phylogenetic analysis, Japanese medaka NLRP12 (NLRP12 -3), zebrafish NLRP3, and three zebrafish NLRC3-like (i.e., NLRC3-like 1, NLRC3-4, and NLRC3-7) have PYD, which is divergent from the teleost NLRC3 group (Figure 1). Furthermore, in mammals, NLRC3 consists of only NACHT and LRR. However, mammals also have PYD, DD, FISNA, RING, PRY, and SPRY, in addition to the NACHT and LRR found in the Japanese medaka and NLRC3 and NLRP12 families found in zebrafish, which have branched from the mammalian NLRC3 group. 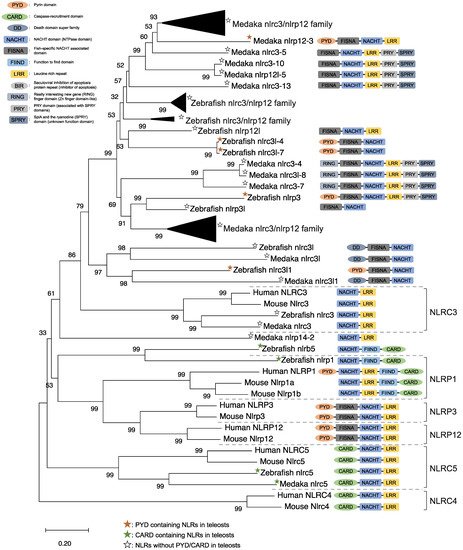 Figure 1. Phylogenetic relationship of the nucleotide-binding oligomerization domain-leucine-rich repeat-containing receptor family in mammals (human and mouse) and fish (Japanese medaka and zebrafish). The tree was constructed using the MEGAX and a neighbor-joining method with 1000 bootstrap replications. The black triangle shapes show the collection of the clusters.

In mice, NLRC3 inhibits TLR signaling by suppressing the signaling adaptor of TRAF6 alongside the transcription factor NF-κB [38]. However, NLRP3, which is clustered with both the zebrafish and Japanese medaka NLRC3 and NLRP12 families (Figure 1), activates the inflammatory response as an inflammasome in zebrafish. Additionally, the Japanese flounder NLRC3 involved extracellular ATP-mediated inflammatory responses [39], while Nile tilapia NLRC3 induced NF-κB activity in mammalian cells [40]. Therefore, both the NLRC3 and NLRP12 families in teleosts, which have branched from mammalian NLRC3 (Figure 1), may undergo a variety of unique evolutionary paths and have different functions from mammalian NLRCs. Furthermore, some NLRC3, NLRP12, and NLRP3 in the Japanese medaka and zebrafish conserve PRY and SPRY domains (also known as B30.2 domain), whereas these domains are not conserved in mammalian NLRs [37] (Figure 1). In zebrafish NLRP3, the B30.2 domain did not influence CaspA or CaspB activities; however, both PYD and NACHT influenced CaspA or CaspB activities [27]. According to the domain structures and phylogenetic analysis, there could be uniquely evolved inflammasome-forming NLRs with similar functions in mammals.

ASC is an adaptor protein of the inflammasome, which is recruited after NLRs recognize ligands (Figure 2). The ASC has two functional domains, PYD and CARD, and has been identified in many fish species, including zebrafish and Japanese medaka [41][42][43][44][45][46][47]. ASC binds to NLRPs via PYD–PYD interactions in mammals [48]. Moreover, in zebrafish and Japanese flounder, NLRP3 and ASC are co-localized in the cytosol, and they are detected as small spot signals under a microscope [27][36]. Furthermore, deletion of PYD in the ASC is not co-localized with NLRP3, and CARD deletion does not influence co-localization in either zebrafish or Japanese flounder [27][36]. Therefore, NLRP3 may bind to ASC through PYD–PYD interactions in teleosts and mammals. NLRP1 has two functional domains in humans: the N-terminal PYD and C-terminal CARD domains, which are important in inflammasome formation (Figure 2). However, zebrafish NLRP1 only has a C-terminal CARD, similar to mice [31][35] (Figure 1). The N-terminal PYD of NLRP1 has autolytic activity in function to find domain (FIIND), and it inhibits the formation of the NLRP1 inflammasome in humans [31][32]. As a result, the important inflammasome-forming domain in humans, like in mice, is CARD. In mammals, NLRP1 can recruit ASC pro-Casp1 via CARD–CARD interactions [31] (Figure 2). In contrast, zebrafish NLRP1 recruits only ASC via the CARD–CARD interaction; subsequently, the ASC recruits pro-CaspA or pro-CaspB [35] (Figure 2). The difference in the NLRP1 recruitment molecules between mammals and zebrafish is thought to be related to the structure of Casp1. The differences in the structure of the aforementioned Casp1 proteins are described in the following section. In zebrafish, NLRP1 is co-localized with ASC during spot formation in the cytosol. However, the PYD-deleted ASC is not entirely co-localized with NLRP3 and oligomerizes during filament formation. In contrast, the CARD-deleted ASC does not show any co-localization with NLRP1 in zebrafish [35]. Consequently, zebrafish NLRP1 may bind to ASC via a CARD–CARD interaction (Figure 2). In a recent study, there were three replicated ASCs in Japanese medaka, all of which had PYD and CARD [42]. It is unclear whether these ASCs also bind to NLRP family members, which needs to be investigated in the future.

Figure 2. Differences between the cyprinids and other fish species in their inflammasome activation and pyroptosis pathways. In most fish, the nucleotide-binding oligomerization domain-leucine-rich repeat-containing receptor (NLR) family recognizes the ligands, and bind to apoptosis-associated speck-like protein containing a caspase recruitment domain (ASC) and pro-Caspase1 (Casp1) via pyrin domain (PYD)-PYD and caspase recruitment domain (CARD)-CARD interactions, thus forming the inflammasome. However, in cyprinids, ligands recognize the NLR family and construct two types of inflammasomes: in the first, the NLR family binds to ASC and pro-CaspA/B via CARD–CARD and PYD–PYD interactions, respectively. The NLR family interacts with ASC via the PYD–PYD interaction, and the ASC oligomerization occurs via CARD–CARD (called ASC core). Then, the pro-CaspA/B binds to the ASC core via the PYD–PYD interaction. After activation, the Casp1/A/B undergoes self-proteolysis, and the Casp1 matures interleukin-1β, inducing pyroptosis through gasdermin-E cleavage in all fish, including cyprinids. In addition, the cyprinid’s CaspB works as a non-canonical inflammasome activator, similar to mammalian Casp4/5/11. The pro-CaspB directly recognizes liposaccharides and thus activates by itself.

After the interaction between NLRs and ASC, ASC then recruits pro-Casp1, and together, they form the inflammasome (Figure 2). In all vertebrates, excluding cyprinid fish, pro-Casp1 has two functional domains, CARD and caspase consensus (CASc) (Table 1). Pro-Casp1 is self-proteolyzed into the active-form Casp1 after it binds with ASC, mutually catalyzing other pro-Casp1s [49][50]. Japanese flounder pro-Casp1 was also activated by NLRP3 [36]. In contrast, cyprinids pro-CaspA and pro-CaspyB possess PYD and CASc domains instead of CARD; moreover, zebrafish pro-CaspA and B are co-localized with NLRP1, NLRP3, and ASC in the spot formation [27][35]. Therefore, in teleosts, pro-Casp1 is activated via NLRP1 or NLRP3 inflammasome formation.

Table 1. Structures of typical and cyprinid-types pro-Caspase 1 in vertebrates.

ASC is not only an inflammasome adaptor molecule; it also forms a speck, called ASC speck (also known as ASC pyroptosome), which is an oligomerized ASC that can also activate Casp1 [51][52][53][54]. In mammals, LPS or monosodium urete (MSU) induces ASC speck formation, then the ASC speck recruits and activates Casp1, induces IL-1β maturation, and triggers pyroptosis [52]. In zebrafish, ASC speck formation was induced by ASC overexpression or via the induction of inflammation with CuSO4 stimulation in vivo, after which the endogenous ASC recruits to the overexpressing ASC to form the speck [55]. Moreover, ASC overexpression induced speck formation in goldfish and turbot [43][47]. During overexpression of ASC, the PYD-deleted ASC demonstrated filament formation, and the CARD-deleted ASC diffused (not co-localized) into the cytosol of zebrafish and turbot [41][47]. In accordance with these results, the PYD domain of ASC could be the key to ASC speck formation in teleosts. The zebrafish ASC speck was co-localized with CaspA [41], suggesting that PYD-ASC interacts with PYD-CaspA (Figure 2).