Fe and P deficiency responses, which enable plants to improve their ability to acquire these nutrients, show many similarities.

Iron (Fe) and phosphorus (P) are two essential elements for plant growth whose nutrition is closely related. Both elements are abundant in soils but with poor availability for plants, which favor their acquisition by developing root morphological and physiological responses. Ethylene (ET) and nitric oxide (NO) have been involved in the regulation of both Fe and P related acquisition genes. The common involvement of ET and NO suggests that they must act in conjunction with other specific signals, more closely related to each deficiency, to avoid the induction of the specific responses when ET/NO increase due to other nutrient deficiencies or stresses. Besides the specificity conferred by these signals, ET itself could confer specificity to the responses to Fe- or P-deficiency by acting through different signaling pathways in each case.

To acquire Fe, dicotyledonous plants use Strategy I [1], which is characterized by the necessity of reducing Fe3+, the most abundant form in soil, to Fe2+, prior to its absorption. This reduction is mediated by a ferric reductase located in the plasma membrane of the epidermal root cells and encoded by FRO2 in Arabidopsis [2]. Once Fe3+ has been reduced, it is transported into the cells by a Fe2+ transporter encoded by IRT1 in Arabidopsis  [3].

Under Fe deficiency conditions, dicotyledonous plants induce physiological and morphological changes in their roots, known as “Fe deficiency responses”, aimed to improve its mobilization and uptake. The main physiological responses are: enhanced ferric reductase activity, enhanced Fe2+ transport, and rhizosphere acidification, due to the upregulation of FERRIC REDUCTATE OXIDASE (FRO), IRON-REGULATED TRANSPORTER (IRT) and H+-ATPase (HA) genes[4][5][6][7]. Other relevant physiological responses are the increased synthesis and/or release of organic acids; phenolic compounds, such as coumarins; and flavins, which can act as chelating and reducing Fe agents, improving its solubility for plants [8][9][10][11][12].

The master regulator of most Fe deficiency responses in Arabidopsis is FIT, a basic helix-loop-helix (bHLH) transcription factor (TF) which is induced in Fe-deficient roots [15][16][17].

Plants acquire P from the soil as inorganic phosphate (Pi) through phosphate transporters, encoded by PHOSPHATE TRANSPORTER 1 (PHT1)-like genes, which are induced by P deficiency [18]. In Arabidopsis, the main Pi transporters implicated in its acquisition from the medium are PHT1;1 and PHT1;4, also named PT1 and PT2 [19][20][21][22][23]. Both transporters are located in subapical root hairs [24][25].

When plants grow under P deficiency conditions, they induce several physiological and morphological responses, mainly in their roots, to improve its acquisition. The main physiological responses are the increase of phosphate transporters; the acidification of the rhizosphere; and the exudation to the rhizosphere of phosphatases, encoded by genes like PAP17 in Arabidopsis (also named ACP5, “Acid Phosphatase”), and organic acids [26][22][23][27].

The regulation of phosphate transporter genes, like PHT1;1 and PHT1;4, is mediated by several TFs, such as the PHOSPHATE RESPONSE (PHR1) and the PHOSPHATE TRANSPORTER TRAFFIC FACILITATOR1 (PHF1) [36]. PHR1 regulates the expression of about 60% of the P deficiency related genes  [37]. Several P deficiency related genes not regulated by PHR1 are regulated by PHL (PHR1-like) TFs  [37].

Finally, another important response to P deficiency is the internal phosphate remobilization, which includes Pi vacuolar release and membrane phospholipids change by sulpholipids and galactolipids  [37].

Fe/P interactions are, therefore, numerous and varied, and can determine the efficiency of Fe and P nutrition in plants. The control of the Fe/P interactions could be a new and effective way to improve the P and Fe nutrition of crops [38]. However, it is necessary to deeply know the mechanisms underpinning their interactions to ensure the success and to obtain more efficient genotypes in the acquisition of both nutrients.

2. Role of ET and NO in the Regulation of Fe and P Deficiency Responses. Similarities and Differences

Fe and P deficiency responses, which enable plants to improve their ability to acquire these nutrients, show many similarities [39][40][41]. Several responses to both deficiencies are similar, like rhizosphere acidification, enhanced synthesis of organic acids and coumarins, and development of subapical root hairs and proteoid roots. Furthermore, both kinds of responses share common regulators, such as ET and nitric oxide (NO), which increase their production in Fe-deficient roots as well as in P-deficient roots [33][42][43][44][45][46][47][48][49][50].

2.1. ET and NO Involvement in the Regulation of Physiological and Morphological Responses to Fe Deficiency

ET/NO have been involved in the activation of physiological responses to Fe deficiency and in most of the Fe-related genes associated with them [22][51][52][53][54][55][56]. ET/NO have also been involved, along with auxin and other signaling substances, in the development of most of the Fe deficiency morphological responses [reviewed in 33 and 81]. ET/NO interactions in such a regulation was studied by Romera’s group [57][58][59]. Furthermore, this group, along with Dr. Yeh’s group, has also paved the way to study the relationship between NO and S-nitrosoglutathione (GSNO) in the regulation of Fe deficiency responses  [60][61][62]. NO can react with glutathione (GSH) to produce GSNO, the main NO reservoir in plants [63]. GSNO levels are regulated by the GSNOR enzyme [62]. The GSNOR1 gene, encoding this enzyme in Arabidopsis, is upregulated under Fe deficiency [62]. GSNO and NO have been found to play key roles in the regulation of Fe deficiency responses and other abiotic and biotic stress responses  [34][64][57][58][60][61][62][65][66][67].

ET and NO have also been involved in the regulation of the cell wall composition and in the dynamic of the endodermal cells suberization, respectively. Fe deficiency increases the synthesis of putrescine, a natural polyamine that triggers a NO burst, which acts as a positive regulator of the solubilization of cell wall-bound Fe [68].

2.2. ET and NO Involvement in the Regulation of Physiological and Morphological Responses to P Deficiency

For decades, the ET involvement in the regulation of P deficiency responses has been limited to its role in the inhibition of the primary root growth and in the development of lateral roots and root hairs [69][70][71][72]. Nowadays, there are experimental results showing that ET also plays an important role in the regulation of physiological responses to P deficiency [73][74][75][76][77]. Lei et al. [75] showed that the ET insensitive Arabidopsis mutants etr1 and ein2-5 present a lower expression of the genes encoding the P transporters PT1(PHT1;1) and PT2(PHT1;4). On the contrary, Arabidopsis hps2 (ctr1 homolog), a constitutive ET signaling mutant [78], displays enhanced responses to P deficiency [75]. ET has also been involved in PHT1;5 regulation [73][79]. Finally, very recently it has been shown that PHR1 expression is induced by ACC (ET precursor) [80].

In other plant species, such as Medicago falcata, results also support a role for ET in the regulation of P deficiency responses [81]. The expression of MfPT1 and MfPT5, encoding P transporters, and of MfPAP1, encoding an acid phosphatase, was clearly inhibited by the ET synthesis inhibitors aminoethoxyvinyl glycine (AVG) and cobalt (Co2+). On the other hand, the treatment with the ET precursor ACC produced an increase of the expression of those genes in plants grown under P-sufficient conditions[81].

To date, the role of NO, GSNO and GSNOR in the regulation of physiological responses to P deficiency has been poorly studied [82]. However, in a recent work [83] it has been shown that NO induces the expression of the P transporter OsPT2. On the other hand, and as occurs under Fe deficiency, the GSNOR1 gene is also upregulated under P deficiency [62].

For many years, ET has been involved in the regulation of morphological responses to Fe and P deficiency, like subapical roots hairs, proteoid roots and transfer cells [reviewed in [33][84][85]. For example, Zaid et al. [86] found that proteoid root formation in Casuarina glauca, induced by Fe deficiency, was inhibited by treatments with several ET synthesis and action inhibitors, like aminooxyacetic acid (AOA), cobalt and silver thiosulfate (STS), while the ET precursor ACC induced the development of proteoid roots in Fe-sufficient plants. These results clearly show a role for ET in this typical morphological response to either Fe or P deficiency.

3. Mechanisms for the induction of Fe- and P-related genes by ET and NO

The mechanisms by which ET and NO regulate the responses to both deficiencies are not completely known although some advances have been achieved in the last years. For ET, it has been found that EIN3/EIL1 are common key TFs involved in the regulation of physiological and morphological responses to Fe and P deficiency (Figure 1). 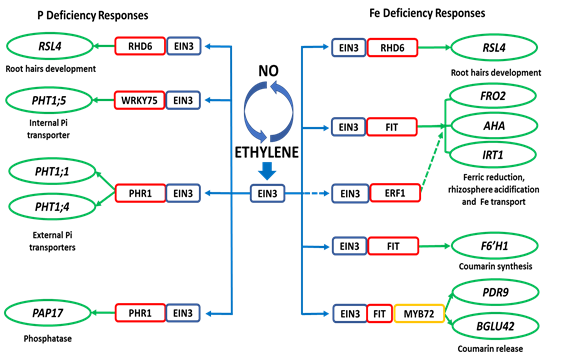 Besides ET synthesis, GSNO (NO) could also affect ET signaling. Very recently, it has been found that the ERF72 TF (also named RAP2.3) participates in the regulation of Fe deficiency responses in Arabidopsis [107]. ERF72 belongs to the group VII ERFs [108], which are sensors of NO and can be targeted for proteolysis degradation by the N-end rule in the presence of NO [109]. Curiously, ERF72 interacts with DELLA proteins [108], also involved in the regulation of Fe deficiency responses [79].

GSNO/NO levels can be regulated by ET. In a recent work, García et al. [40] showed that ET (ACC) induces GSNOR1 expression (Figure 2). ET (ACC) can also increase NO content by activating enzymes involved in its synthesis, such as nitrate reductase and nitric oxide synthase-like [101]. This would imply that ET could simultaneously increase NO accumulation and decrease GSNO content [Figure 2; [40].

Figure 2. Model to summarize the relationship between ET, NO and GSNO in Fe- and P-deficient roots. Fe and P deficiency conditions induce several enzymes related to NO and ET synthesis, like NR, SAMS, ACS and ACO. Each one (NO, ET) mutually influences the synthesis of each other. Fe and P deficiency can also induce the GSNOR enzyme, which leads to a decrease in GSNO levels. GSNO, formed from NO and GSH, can limit ET synthesis through SAMS nitrosylation. On the other hand, ET can promote GSNO degradation by inducing the GSNOR enzyme. Finally, ET, through EIN3 and other ERF TFs, would activate Fe and P deficiency responses.