Plants produce numerous secondary metabolites and rich in phytochemicals, which are potential bioresources for synthesizing Cu and CuO Nanoparticles (NPs). This green synthesis approach is environmentally friendly and more advantageous over commercial synthesis using physical and chemical methods. The green synthesized Cu and CuO NPs can be used as anticancer, antibacterial, antifungal and anti-inflammatory agents in biomedical applications. We discuss about the green synthesis of Cu and CuO NPs using various plants, factors affecting the synthesis, biomedical applications, and toxicity evaluation of the NPs. In addition, the mechanisms of the NPs entry into biological entities were also discussed.

Green synthesis of Cu and CuO NPs is more advantageous than chemical and physical synthesis as it is a clean, nontoxic, cost-effective, and environmentally friendly approach. It bypasses the use of harsh, toxic, and expensive chemicals [1] and, instead, utilizes biological entities like bacteria [2], yeasts [3], fungi [4], algae [5], and plants [6]. Among all these natural organisms used in the green synthesis of Cu and CuO NPs, plants rich in bioactive compounds can serve as a reducing, stabilizing, and capping agent during NP synthesis; this makes them the best choice. They are nonpathogenic to humans, and the downstream processing steps are simple [7]. Unlike some bacterial and fungal strains that produce the NPs intracellularly, plant-mediated NP synthesis yields the NPs in the mixture solution, which can be easily obtained by filtering, rinsing, and drying [8][9]. The size, morphology, and stability of NPs can also be easily optimized for medicinal and pharmaceutical usage using this green method [10][11][12].

The most important phytochemicals in plants are phenols and flavonoids, found in different parts of the plants, such as shoots, leaves, stems, flowers, roots, and fruits. These phenolic compounds possess hydroxyl and ketone groups, contributing to the iron chelation and subsequently demonstrating a strong antioxidant property [13]. NPs synthesized through this green method increased in stability, prevented the agglomeration and deformation of the NPs and allowed adsorption of phytochemicals on the surface of the NPs, which enhance the reaction rate of NPs [14]. One of the common techniques in synthesizing Cu and CuO NPs is mixing a known concentration of plant extract to a known concentration of precursor and heating the mixture to a fixed temperature, with continuous stirring at a given time (Figure 1). 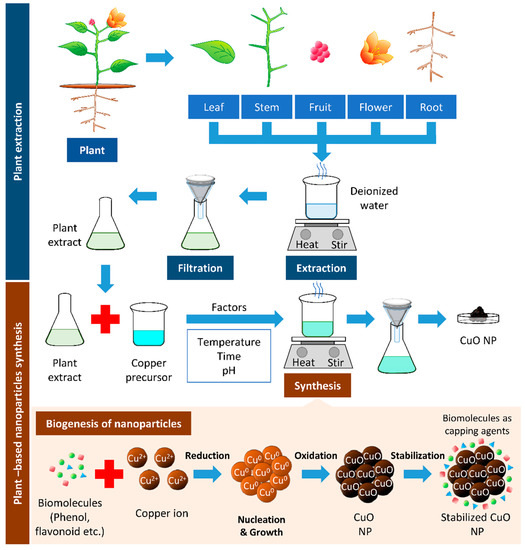 Figure 1. Plant-based synthesis of copper oxide nanoparticles. The boiling of respective parts of the plant can be used to extract biomolecules from the plant. The resulted filtrate is the plant extract, which can reduce the copper precursor to synthesize copper/copper oxide nanoparticles (Cu/CuO NPs). The biomolecules’ presence in plant extracts serves as reducing, stabilizing, and capping agents in Cu/CuO NP synthesis.

Occasionally, certain organic chemicals were added to prevent agglomeration and obtain fine NPs while maintaining the greener approach. The synthesized NPs eventually form various shapes and sizes, which carry unique properties in many applications [6]. Different characterization techniques can analyze the physical and chemical properties of NPs. In addition to size and shape, the size distribution, degree of aggregation, surface charge, surface area, and surface chemistry of the NPs can also be analyzed [15] (Figure 2). 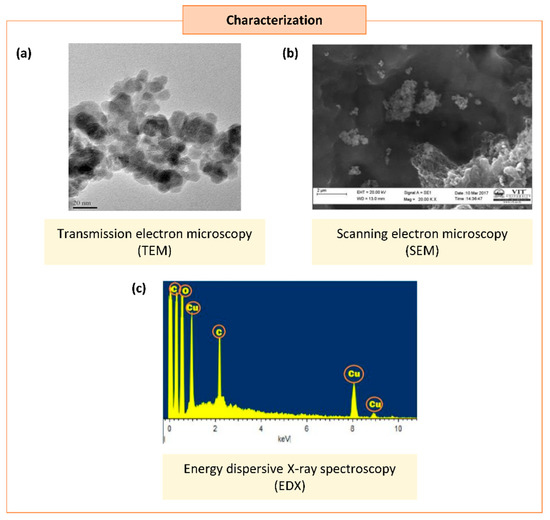 Cu exists with variable oxidation numbers; this includes Cu(I), Cu(II), and very few Cu(III) ions. To date, the synthesis strategy reported for CuO, Cu2O, and Cu4O3 is the same in terms of parameters such as plant extract, precursor concentration, pH, and temperature. However, these parameters mainly affect the type of Cu particles formed during green synthesis [18].

2.2. Factors Affecting the Green Synthesis of Cu and CuO NPs

A few parameters play a crucial role in determining the characteristics of the Cu and CuO NPs synthesized; these include reaction temperature, pH, time, concentration of plant extracts, precursor used, and mixing speed.  The reaction medium’s temperature was found to influence the nature of the NPs formed. As the reaction temperature increases, the reaction rate increases, consuming metal ions to form the nuclei of the NPs; this may lead to smaller NP sizes [19]. Generally, green synthesis is conducted below 100 °C or at ambient temperature [20]. NPs can undergo aggregation, shrink, or grow during long-term storage and it also has a shelf life that eventually affects its overall potential [21][22]. Studies have implied that the size of NPs is dependent on the reaction time [23][24][25][26]. It can be seen that increases in the time taken for green synthesis increase the size of the NPs. The biomolecules in plant extracts can act as natural capping and reducing agents during the green synthesis of NPs. These metabolite compositions vary depending on the types and parts of the plant and the extraction procedure [27]. Hence, the volume of plant extracts and the amount of biomolecules present in the plant extract used can affect the synthesis rate due to the availability of these molecules for the rapid bioreduction of metal salts and the stabilization of NPs [28]. The precursor is a salt and alkali metal solution. Numerous soluble copper salts were used in the green synthesis of Cu and CuO NPs. The pH of the reacting mixture in the biosynthesis of NPs is also one of the factors affecting the size of NPs. The optimum pH of the reaction medium ranges from 7–9, suggesting an alkaline condition is favorable for synthesizing NPs [29].

3. Application of Cu and CuO NPs 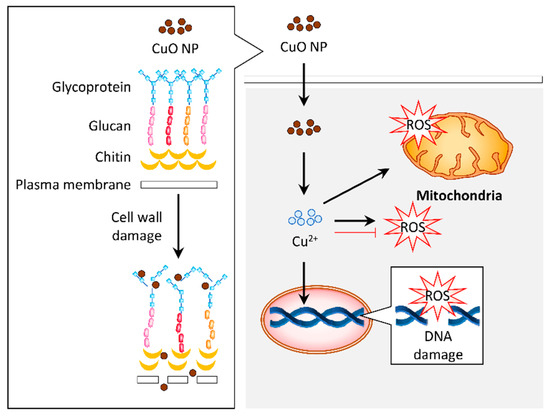 This aspect should be evaluated thoroughly before utilizing these NPs in medicine. Here, we review the toxicity of plant-based green-synthesized Cu and CuO NPs in vitro and in vivo studies. A previous study has demonstrated that plant-mediated Cu NPs are relatively safe on normal human cell lines (Table 2). These data revealed that the Cu and CuO NPs have minimal toxicity in normal cells, with a cytotoxicity effect on cancer cells at low concentrations, suggesting their safe application. Nevertheless, the toxicity and optimal dosage to be administrated should be evaluated. It is crucial to evaluate the toxicity of plant-mediated CuO NPs in various animal models.

Table 2. Effects of the plant-derived Cu and CuO NPs biosynthesized on cell lines and animal models.

5. Comparison of the Efficacy of Plant-Based-Synthesized and Commercial Cu and CuO NPs

It was documented that the efficacy of these NPs in suppressing cancer proliferation was comparable to commercial CuO NPs or was even better in some of the cases (Table 3). These findings imply the potential of plant-based CuO NPs in cancer therapy without causing significant toxicity to normal cells.

Table 6. Comparison of the toxicity of plant-derived and commercialized CuO NPs.

6. Future Perspective in Cancer Therapy of Cu and CuO NPs

Advancement in the green synthesis of NPs has created a new approach in biomedical applications. Plant-synthesized Cu and CuO NPs have many attractive properties, such as antibacterial, antifungal, anticancer, anti-inflammatory, and wound healing. It is important to note that the Cu/CuO NPs synthesized from different plants have different properties due to the diversity in metabolite composition. This diversity leads to variation in size, shape, and morphology of the NPs, which contributed to the alteration of their overall properties and activities. Additionally, further validation of the underlying mechanisms and pathways of Cu/CuO NPs at both the cellular and organism level is mandatory. Therefore, a comprehensive study on these NPs, including in vitro and in vivo assessments from different aspects, would drive their medicinal application. Although it seems that many trials and more research need to be conducted, the potential and prospects for developing Cu and CuO NPs as a future drug, especially in cancer therapy, are still very bright. The green technology of NPs, utilizing natural plant resources that will be developed into nanobiotechnology, is not very far off from a breakthrough.