Mares are seasonal polyestric. The morphology of the healthy equine endometrium is influenced by the season of the year, the stage of the endometrial cycle, as well as the presence of endometrial diseases. The latter have an impact on the wellbeing of individual mares and can also inflict major financial losses for the horse breeding industry. The microscopic examination of an endometrial biopsy is an important diagnostic tool, since it can also detect subclinical diseases. This review provides an overview about morphological and molecular features of the healthy and diseased equine endometrium. It reviews the diagnostic findings of inflammatory and degenerative endometrial disease of mares, as well as the current state of knowledge regarding their cellular and molecular pathogenesis. It further shows that the comparative evaluation of morphological features and molecular characteristics of the healthy and diseased equine endometrium is an important prerequisite for the identification of disease-associated molecular markers, which in turn will facilitate the development of diagnostic and predictive biomarkers, as well as novel prophylactic and therapeutic options. Although currently numerous molecular data are already available, future studies are required to establish their translation into clinical practice.

Mares are seasonal polyestric and the endometrial morphology is influenced by the season of the year [1][2][3][4], external factors such as lightening and temperature [3] as well as the stage of the endometrial cycle [1][2]. In the Northern hemisphere, the breeding season during late spring and summer and the winter anestrus are connected by the spring and autumn transitional periods [3][4].

Endometrial diseases of mares are an important cause of subfertility [1][2][5] and can inflict major financial losses for the horse breeding industry. Endometrial diseases include endometrosis (synonym: periglandular fibrosis), endometritis, glandular differentiation disorders, and angiosis (synonym: angiosclerosis) as well as their subtypes [1][2][4][5][6][7]. The concurrent presence of several endometrial diseases in an individual mare is a common finding [1][5]. Endometrosis is characterized by periglandular fibrosis together with functional alterations of epithelial cells lining altered glands [5][7]. Endometrosis should not be confused with endometriosis, that represents a separate disease. In contrast to equine endometrosis, endometriosis is a disease of women and menstruating primates and is characterized by the presence of endometrial tissue within the serosa of the abdominal or pelvic cavities [7]. As a physiological reaction, mating or breeding evokes transient inflammation with a duration of less than 72 hrs [5][8][9]. Some mares, however, develop persisting post-breeding endometritis; these are referred to as “susceptible mares” [9][10].

The incidence and degree of some endometrial diseases are influenced by factors of the mare such as age and numbers of parturitions [5][6][7][12]. A statistically significant association exists between an older age of the mare and a higher incidence, as well as an increased degree of endometrosis [5][12][13]. The frequency of occurrence and severity of angiosclerosis rises with an advanced age of the mare and an increased number of foalings [6][13]. Microscopic findings in the endometrial biopsy of a mare, however, need to be interpreted under consideration of signalment of the mare, clinical history and season of the year [2][4][5][13]. In regard to the latter, glandular maldifferentiation is only of clinical relevance when it is diagnosed in an endometrial biopsy collected during the breeding season [4][13].

Based on the detection of certain microscopic findings, i.e. incidence and degree of endometritis, periglandular fibrosis and lymphatic lacunae, as well as endometrial atrophy during the breeding season, together with the length of barrenness, the categorization scheme of Kenney and Doig [1] is used for prognostication of the fertility of an individual mare. Subsequently, glandular maldifferentiation [13][14][15], angiosclerosis [6][13][16], subtype of endometrosis [5][17], older age of the mare [5][13] and a previous long-term use of the mare in athletic performances [18] have been revealed as further factors of reduced fertility.

Over the last years, scientific investigations on equine endometrial pathology focused on the characterization of disease-associated cellular and molecular mechanisms [15][17][19][22][23][24][25][26][27][28][29][30][31][32]. Obtained data have diagnostic value and will assist to gain further insights into the molecular pathogenesis of endometrial diseases [15][17][19][22][23][24][25][26][27][28][29][30][31][32]. In addition, they will likely help to design novel prophylactic regimes and treatment options [20]. Certain molecular markers have the be considered as potential biomarkers for equine endometrial health and disease, since they identify morphological and functional cellular alterations associated with endometrial diseases [15][17][23][24][25][26][27][29][30][31][32] and their cellular expression patterns can be visualized and quantified using immunohistochemistry [17][24][25][29][30][32][33]. For example, unphysiological expression of estrogen and progesterone receptors predicts altered hormonal responsiveness of the equine endometrium [17][24]. Abnormalities of the basement membrane, that can be detected by laminin immunostaining, indicate alterations in paracrine interactions between glandular epithelial and stromal cells and may result in unphysiological cellular responses to hormonal stimulation [24].  Changes in the physiological immunoreaction for intermediate and contractile filaments and associated proteins are consistent with an abnormal cellular differentiation [24][31][32]. Deviations in the expression of secretory proteins by glandular epithelia will likely cause alterations in the composition of the uterine milk as essential nutrition of the early equine conceptus [17][25]. Changes in the immunostaining for components of the innate immune defense, i.e. β-defensin and indoleamine 2,3-dioxygenase 1, suggest alterations of endometrial immunity mechanisms [29][30].

The combined evaluation of morphological findings and associated molecular features indicates that some examined molecular markers have the potential to serve as biomarkers for endometrial health and disease [34]. A biomarker is a biological parameter that can be objectively evaluated and indicates a normal or abnormal biological process or a response to an intervention, e.g. an immunohistochemical marker with diagnostic or prognostic value or merit for the prediction of a treatment response [35][36].

In the equine endometrium, molecules with potential to serve as biomarkers are estrogen and progesterone receptors, the intermediate and contractile filaments vimentin, desmin and α-smooth muscle actin, the actin filament associated protein calponin, glandular secretory proteins (uteroglobin, uterocalin, uteroferrin) as components of the uterine milk, basement membrane proteins, as well as β-defensin and indoleamine 2,3 dioxygenase as components of the innate immune defense [34]. The comparative assessment of molecular markers within the healthy and diseased equine endometrium will likely help to identify and quantify cellular dysfunctions associated with endometrial diseases and their subtypes [34]. For this, immunohistochemistry seems to be the most appropriate diagnostic tool, since it allows the detection of the proposed biomarkers in the context of tissue morphology and allows an objective measurement of their expression levels [34].       Obtained data could assist to more precise estimate the fertility prognosis of an individual mare [34]. In addition, they are a prerequisite for the development of novel prophylactic regimes and treatment options [20][34]. In this regard, Mambelli et al. [20] observed that the implantation of multipotent mesenchymal stem cells in the endometrium of mares was associated with molecular changes in endometrotic areas towards the physiological phenotype of healthy glands.  Additional studies are required to establish the translation of research data into clinical practice.

The content of this article is summarized in Figure 1. 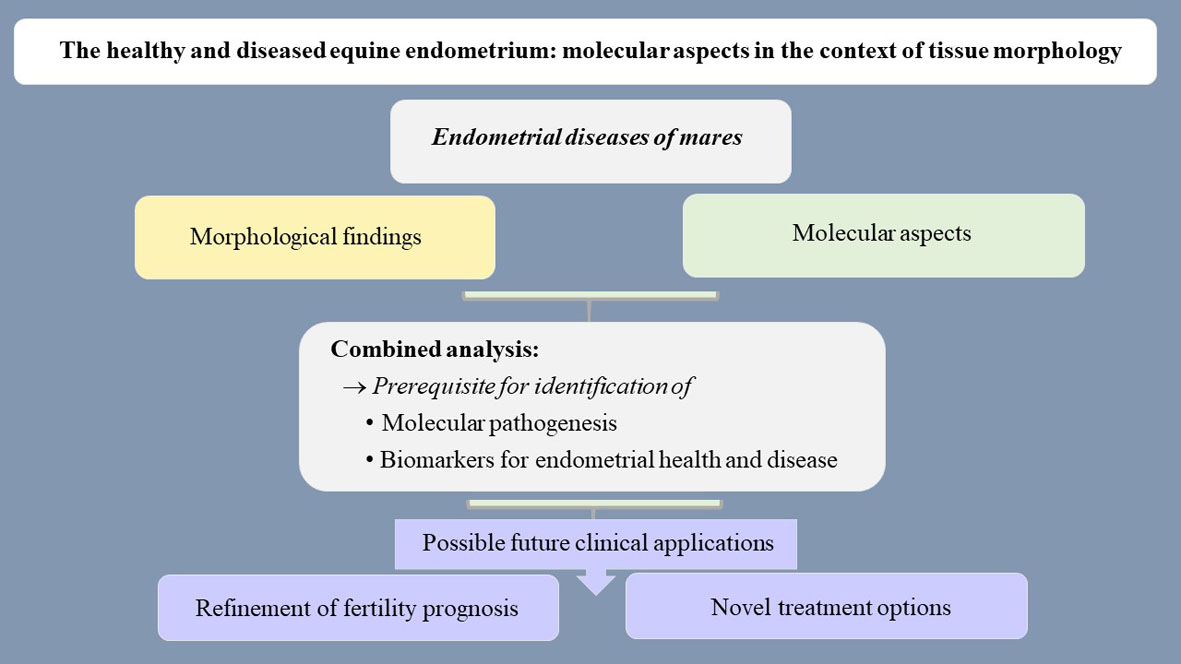 Figure 1: Endometrial diseases are characterized by abnormal tissue morphology and associated molecular alterations. The combined analysis of both parameters provides insights into the molecular pathogenesis of endometrial diseases and assists in biomarker identification. These two aspects in turn will likely help to refine the fertility prognosis for an individual mare and to design novel treatment options.