Immunosuppression is a common feature of multiple myeloma (MM) patients and has been associated with disease evolution from its precursor stages. MM cells promote immunosuppressive effects due to both the secretion of soluble factors, which inhibit the function of immune effector cells, and the recruitment of immunosuppressive populations. Alterations in the expression of surface molecules are also responsible for immunosuppression.

Monoclonal antibodies (mAbs) have emerged as a backbone therapy for many B-cell tumors, due to their high efficacy and good tolerability. However, the development of effective mAbs for the treatment of MM has been tough, since the discovery of target molecules unique for all MM cells resulted challenging. Up to date, there are three naked mAbs and one antibody–drug conjugate (ADC) approved for the treatment of MM. Their main mechanisms of action can be found in Figure 1. 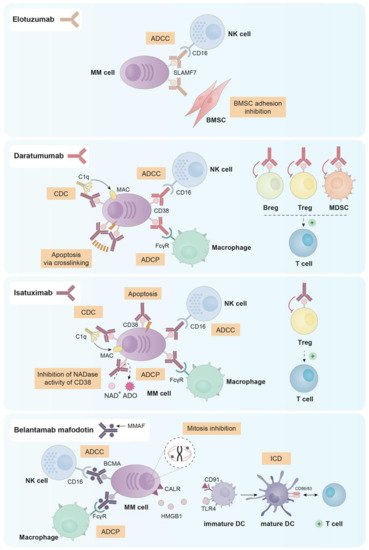 Figure 1. Principal mechanisms of action of the three naked mAbs (elotuzumab, daratumumab and isatuximab) and the ADC (belantamab mafodotin) approved for the treatment of MM.

Elotuzumab (anti-SLAMF7) was the first mAb approved by the US Food and Drug Administration (FDA) for the treatment of MM. In particular, elotuzumab was first approved in combination with lenalidomide and dexamethasone for relapsed/refractory myeloma patients who had received one to three prior therapies [1]. SLAMF7, also known as CS1, is a cell surface molecule expressed in plasma cells, CD8+ cytotoxic T lymphocytes, activated B cells, NK cells and mature DCs [2][3][4][5]. In the context of MM, SLAMF7 is expressed in both primary malignant plasma cells and in almost all MM cell lines. In addition, soluble SLAMF7 has been detected in serum of MM patients presenting a direct correlation with disease stage [2][5].
Elotuzumab is a humanized IgG1 mAb that inhibits MM cell adhesion to BMSCs, which may reverse the protective effect provided by the bone marrow microenvironment to myeloma cells. Additionally, elotuzumab is able to induce antibody dependent cellular cytotoxicity (ADCC) mediated by NK cells in both MM cell lines and primary plasma cells from myeloma patients (either newly diagnosed or resistant to conventional therapies) [5].
Since NK cells and a small subset of activated lymphocytes express SLAMF7, elotuzumab is able to activate ex vivo different subsets of peripheral blood mononuclear cells (PBMCs) from myeloma patients and healthy donors. Indeed, elotuzumab selectively activated the subpopulation of CD56dim NK cells, upregulating CD69, CD11b and CD54 and downregulating CD16 expression and resulting in the killing of myeloma cells via a CD16-independent mechanism [6]. Moreover, elotuzumab also activated monocytes as evidenced by the up-regulation of SLAMF7, HLA-DR and CD54 [7].

Daratumumab is an anti-CD38 mAb that was approved in 2015 by the FDA for MM patients who had received at least three prior lines of therapy or for patients double refractory to proteasome inhibitors and immunomodulatory agents [8][9]. Besides, it has been recently approved for NDMM patients ineligible for stem-cell transplantation [10]. CD38 is expressed in different cell subsets from hematopoietic and non-hematopoietic lineages. Regarding the first, CD38 is expressed in Tregs, circulating monocytes, CD4+ and CD8+ T cells, NK cells, granulocytes/neutrophils, B cell precursors and in terminally differentiated plasma cells from healthy donors [11][12][13]. In the context of MM, CD138+ malignant plasma cells express higher levels of CD38 than other immune subsets and normal plasma cells [14]. Moreover, CD38 is also expressed by osteoclasts in the tumor niche [15].
Daratumumab was first selected from a panel of 42 human anti-CD38 mAbs for being effective in killing MM cells via complement dependent cytotoxicity (CDC) and ADCC [16]. Further studies in vitro, ex vivo and in vivo demonstrated that daratumumab was also able to induce programmed cell death in the presence of crosslinking agents (both F(ab)2 fragments and Fcγ receptor-expressing cells) [17], and antibody dependent cellular phagocytosis (ADCP) [18].
Given that different immune cell subsets express CD38, daratumumab treatment has an impact on them. In fact, it has been described that MM patients treated with daratumumab both in monotherapy and in combination with lenalidomide and dexamethasone, present a decrease in absolute cell count in NK cells (from 10% to 2%), MDSCs, Bregs and Tregs. On the contrary, other immune populations, such as CD4+ and CD8+ T cells showed increased numbers [19][20][21][22]. Despite the decrease in NK cell number observed after daratumumab treatment, according to Casneuf et al. the remaining NK cells seemed to be able to contribute to the clinical efficacy of the drug [21]. Furthermore, daratumumab has been reported to induce NK cell activation and degranulation as observed by the upregulation of CD69, CD107a and IFN-γ in this cell subset [23].

Isatuximab is a humanized IgG1 anti-CD38 mAb that has been recently approved (March 2020) in combination with pomalidomide and dexamethasone for MM patients who had previously received at least two lines of therapy [24]. Isatuximab exerts its antimyeloma effect through different mechanisms. First, and unlike daratumumab, isatuximab has shown proapoptotic activity against myeloma cells expressing high levels of CD38 without any cross-linking agents [25][26]. Moreover, isatuximab also presents immune-mediated cytotoxic effects, such as, the induction of strong CDC, potent ADCC and ADCP [25][27]. In contrast to daratumumab, isatuximab completely inhibits the NADase activity of CD38, which may mitigate the immunosuppressive microenvironment in the bone marrow of MM patients [28][29][30].
As observed with daratumumab, isatuximab is able to suppress Tregs. In fact, in PBMCs from both healthy donors and MM patients treated with isatuximab in vitro, the percentage of Tregs was reduced while the percentage of effector T cells increased. This reduction of Treg frequency was more significant in cells from MM patients than from healthy donors, probably due to the higher expression of CD38 observed in patients’ Tregs [11]. Furthermore, isatuximab upregulated the activation molecules CD107a and IFNγ in monocytes, CD8+ T cells and NK cells not only from healthy donors but also from myeloma patients, augmenting the cytotoxic functions of these three cell subsets both in the presence and in the absence of CD38+ target cells [11][13]. Additionally, Moreno et al. observed that isatuximab depleted in vitro CD38high B-lymphocyte precursors, basophils and NK cells [27]. In fact, the NK cell depletion observed after isatuximab treatment seems to be generated through activation followed by exhaustion of these cells [27].

Belantamab mafodotin (GSK2857916) is an afucosylated, humanized IgG1 anti-B-cell maturation antigen (BCMA) mAb conjugated with monomethyl auristatin F (MMAF), which is a tubulin polymerization inhibitor [31]. Both parts (anti-BCMA antibody and MMAF toxin) are linked through a non-cleavable maleimidocaproyl linker, which provides better plasma stability of the compound without losing any property and without any nonspecific toxicity [32]. Belantamab mafodotin is the first anti-BCMA ADC approved by the FDA as a single agent for relapsed/refractory multiple myeloma (RRMM) patients who have received at least four prior therapies [33]. BCMA, also known as TNFRSF-17, is selectively induced during plasma cell differentiation being almost absent on naïve and memory B cells [34][35]. BCMA is expressed by several myeloma cell lines [36] and BCMA mRNA is commonly expressed at high levels in primary malignant plasma cells [37].
Belantamab mafodotin exerts its antimyeloma effect through four known mechanisms: (i) ADCC mediated by NK cells; (ii) recruitment of macrophages to promote ADCP; (iii) disruption of microtubules and subsequent G2/M cell-cycle arrest followed by apoptosis after the release of the MMAF toxin in the cytoplasm of myeloma cells [31] and (iv) induction of immunogenic cell death (ICD) [32], which is a mechanism characterized by the ability of dying cells to elicit robust adaptive immune responses against altered self-antigens or cancer-derived neo-epitopes [38]. In relation to the latter mechanism, preliminary data indicates that treatment of myeloma cells with belantamab mafodotin promotes the exposure of calreticulin (CALR) on their surface and the release of HMGB1, which subsequently induce the maturation and activation of DCs and eventually the activation of T cells [32].