Solid oxide fuel cells (SOFCs) are promising and rugged solid-state power sources that can directly and electrochemically convert the chemical energy into electric power. Direct-hydrocarbon SOFCs eliminate the external reformers; thus, the system is significantly simplified and the capital cost is reduced. To reduce operating temperatures of SOFCs, intermediate-temperature proton-conducting SOFCs (P-SOFCs) are being developed as alternatives, which give rise to superior power densities, coking and sulfur tolerance, and durability. Due to these advances, there are growing efforts to implement proton-conducting oxides to improve durability of direct-hydrocarbon SOFCs.

Fossil energy sources, including coal, oil, and natural gas, are currently accounting for >80% of the global energy consumption. The rapid growth in fossil fuel extraction, transportation, and consumption is leading to significant anthropogenic climate change and global warming accompanied by the principal CO2 emission [1][2]. Additionally, fossil fuels are not sustainable, and their depletion has been identified as a near-future challenge. Therefore, great efforts have been devoted to ensuring a global economy transition to more efficient utilization of fossil fuels and a low-carbon future [3].
Solid oxide fuel cells (SOFCs) have stimulated great interest in highly efficient energy conversion [4]. As electrochemical energy conversion devices, SOFCs can directly and electrochemically convert the chemical energy stored in fuels into clean electric power without the limitation of the Carnot cycle, which, in turn, leads to higher energy conversion efficiency (~60%) than traditional combustion engines [5]. For example, gas turbines are applied to produce electricity from coal or natural gas using the intermediary steam with lower energy efficiency ranging from 30–40% [6]. Hydrogen is considered as the cleanest fuel, leaving only water as the product, while it is not naturally abundant, and there are many complications in its production, transportation, and storage [7]. Hydrocarbons could offer several attractive advantages over hydrogen, including higher volumetric energy storage density (10.05 kJ/L for hydrogen (LHV) and 36.4 kJ/L for natural gas) and lower transportation cost. For example, in the USA, natural gas or propane is usually distributed through railroad, truck, tanker ship, or pipelines into urban areas. Direct-hydrocarbon SOFCs are, therefore, one of the most promising power sources, which eliminates the fuel processor units and could be integrated into the current power grid, drastically enhancing energy conversion efficiency and reducing emissions.
The SOFC anode, which functions as the catalyst for reforming fuel streams and the electrode for charge transfer, is critical for high-performing direct-hydrocarbon SOFCs. The current SOFC anode is typically a composite of ceramic and metal (i.e., cermet) that exhibits mixed ionic and electronic conduction. For instance, the YSZ-Ni cermet is widely used as the anode for oxygen-ion SOFCs (O-SOFCs) because of its excellent catalytic activities and high electronic conductivity [8]. Unfortunately, Ni is vulnerable when exposed to hydrocarbon fuels as it is kinetically favorable for carbon deposition. Additionally, YSZ-Ni anodes are more prone to coking and sulfur poisoning because the relatively acidic surface of YSZ could not contribute to coke mitigation [9][10][11]. Furthermore, the YSZ-Ni cermet requires an operating temperature of >700 °C, which could thermodynamically favor the coking ascribed to the pyrolysis of hydrocarbons [12]. Since Ni-based anodes are not perfect for working under hydrocarbons, developing Ni-free or oxide-based anodes are emerging approaches to enhancing the durability of direct-hydrocarbon SOFCs [13]. Despite Ni-free anodes delivering good fuel cell performances under hydrocarbon fuels [14], Ni-free anodes are still far away from commercialization and the cell configuration is limited to electrolyte-supported SOFCs. Furthermore, Ni-free anodes need a higher operating temperature (>800 °C) to obtain considerable catalytic activities, and thus the costly balance of plant (BOP) components are required. Hence, few Ni-free anodes demonstrate electro-catalytic activity and electronic conductivity that can compete with the current Ni-based anode. Therefore, robust SOFC anodes, which are catalytically active at intermediate operating temperatures, coking and sulfur-tolerant, as well as chemically stable, are essential for direct-hydrocarbon SOFCs. Proton-conducting oxides have been developed for numerous electrochemical devices because of high proton conductivity at 300–650 °C [15][16][17][18][19]. Due to their relatively basic surface for high water-uptake capability, such oxides are recently applied as anodes for direct-hydrocarbon P-SOFCs. SOFCs with proton-conducting oxides have demonstrated excellent power density and long-term durability (>1000 h), opening a new pathway for developing durable direct-hydrocarbon P-SOFCs [20][21][22].
Comprehensive aspects of hydrocarbon-fueled SOFCs [7][23][24][25][26][27][28][29] and hydrogen-powered P-SOFCs have been summarized by many review papers [21][30][31]. However, there is still a lack of review centering on the hydrocarbon-fueled P-SOFCs [32].

The protons are produced via hydration [31], as shown in Equation (1), where Kröger–Vink notation is used to describe oxygen vacancy V∙∙O, lattice oxygen OXO and proton. This defect reaction indicates oxygen vacancies are required for the formation of protons OH∙O; thus, oxygen vacancy concentration is normally increased by the acceptor doping to improve the proton conductivity, i.e., the substitution of the Zr4+ or Ce4+ host with trivalent dopants (e.g., Y3+/Yb3+).

In the 1980s, Iwahara et al. first recognized that BCY is a proton conductor [15]. However, it was noted that BCY is chemically unstable in the presence of water and carbon dioxide [31,36]. Their poor chemical stability hinders their practical applications and much attention has been shifted to zirconate-based proton conductors, especially BZY, due to their enhanced chemical stability [16]. However, with the increased concentration of Zr4+, its poor sintering ability tends to be a thorny issue. Additionally, BZY displays high grain boundary resistance, resulting in lower proton conductivity than BCY [31]. The researchers, therefore, developed BCZY by synergizing the benefits of both BZY and BCY, improving conductivity and stability [16]. Liu et al. demonstrated that BaCe0.7Zr0.1Y0.2O3 possesses improved chemical stability under 2% CO2 and 15% H2O atmosphere and enhanced conductivity (9 × 10−3 S cm−1) at 500 °C [17]. The same team then pioneered a novel proton conductor, BaCe0.7Zr0.1Y0.1Yb0.1O3 [18], leading to benchmarking proton conductivity and stability under hydrocarbons with hydrogen sulfide.

To tackle the issues associated with sintering, a sintering aid (e.g., ZnO) was added to facilitate the densification and lower the sintering temperatures, increasing the feasibility of using proton-conducting oxides for building fuel cells [37]. A variety of other sintering aids, including NiO and CuO, have also been investigated for fabricating proton-conducting oxides [38]. In 2015, Duan and O’Hayre et al. [22] applied the solid-state reactive sintering method to P-SOFCs fabrication and demonstrated P-SOFCs with remarkable performances and durability with both hydrogen and methane as fuels.

It has been recognized that increasing the basicity of the catalyst surface can suppress coking over heterogeneous catalysts [10]. Tatsuya et al. [36] investigated the catalytic activity and coking tolerance of Ni-YSZ cermet decorated with four alkaline oxides, including MgO, CaO, SrO, and CeO. CaO was identified as the most effective in improving coking tolerance, although it slightly deteriorated the electrochemical activity of the anode. Liu et al. [37] later demonstrated that the modification of the Ni + YSZ anode with nanostructured BaO, which also has a relatively basic surface, could greatly suppress the coke formation. Density functional theory suggests that BaO is capable of absorbing and dissociating water and, thereby, enabling coke mitigation. The water-mediated carbon removal mechanism is illustrated in Figure 1. (1) The basic surface of BaO promotes the dissociation of water into OH* and H* over the catalyst (* indicates the surface site of catalyst); (2) OH* absorbed on BaO will then react with carbon deposited on the Ni and produce CO* and H*. (3) CO* and H* will subsequently react with the oxygen ions at the triple phase boundary and form CO2 and H2O. 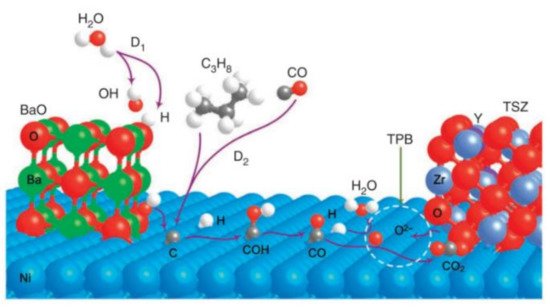 Figure 1. Proposed mechanism for water-mediated carbon removal on the anode with BaO/Ni interfaces [37].
Surface-enhanced Raman Spectrology (SERS) was employed to better understand the coke mitigation mechanisms of Ni-based anodes coated with BaO, BZY, and BCZYYb, respectively [38], revealing that abundant –OH is absorbed on all three materials. These absorbed –OH can readily react with carbon and subsequently clean coke. However, BaO can also easily react with CO2 and form BaCO3, which is irreversible, leading to exacerbated SOFC performance degradation. Unlike BaO, BZY and BCZYYb are capable of regenerating –OH groups, and proton-conducting oxides also have basic surfaces, indicating they could be adopted as the materials for direct-hydrocarbons/ethanol SOFCs. Liu et al. integrated BZCY-Ni with SDC as the anode of direct-ethanol SOFCs, aiming to improve its coking tolerance. They demonstrated ethanol-fueled SOFCs with a power density of 750 mW cm−2 at 750 °C and a stable operation of 170 h. A similar water-mediated carbon removal mechanism was also proposed in this work, suggesting proton-conducting oxides (i.e., BZCY) with high water uptake capacity could accelerate the formation of C–OH intermediates and consequently enhance the carbon removal ability. Furthermore, it has been noted that proton-conducting oxides, such as BCZYYb, can also absorb CO2 and form –CO3 groups, which can help to clean the carbon, further improving the coking tolerance [18].

Figure 2. Schematic illustration of SOFCs with (a) a proton-conducting electrolyte; (b) an oxygen-ion conductor. 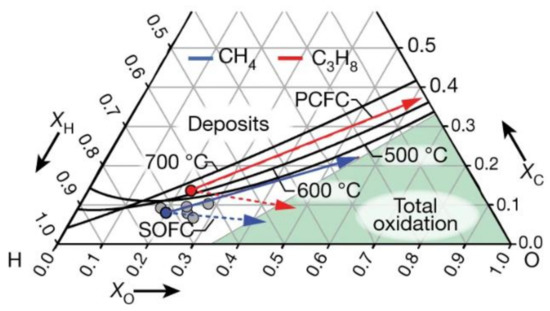 Figure 3. The ternary diagram shows the regions of equilibrium carbon formation and full oxidation. The dots indicate experimental fuel compositions. Fuel composition trajectories for propane (red) and methane (blue) are shown as solid lines for P-SOFCs (increasing current density and removing H) and dashed lines for O-SOFC (increasing current density and adding O). The end-point compositions correspond to the complete oxidation of the fuel stream to CO2 and H2O. ‘Deposits’ indicates the region where coking is thermodynamically favorable [20].

Both P-SOFCs and O-SOFCs are capable of directly converting methane and other hydrocarbon fuels (e.g., C2H6 and C3H8) into electricity. However, coking on YSZ-Ni anode, which blocks the active sites at the triple phase boundary (TPB), results in severe degradation. This is the main obstacle to the commercialization of SOFCs. For example, Yang et al. [37] reported that the terminal voltage of O-SOFCs, when fed with dry C3H8, quickly dropped to nearly zero at a current density of 500 mA cm−2 within the 30 min operation. There are, therefore, increasing efforts devoted to developing alternative direct-hydrocarbon fuel cells, such as P-SOFCs.
Direct-methane P-SOFCs were firstly validated by Coors in 2003. Although the current densities are too low to be commercially visible at that time, it has been demonstrated that P-SOFC shows the unique coking resistance [44]. Luo et al. [2] proved the feasibility of using propane as the fuel in P-SOFCs, achieving improved fuel cell performances [45]. Duan and O’Hayre et al. [22] employed solid state reactive sintering to fabricate P-SOFCs, tackling the manufacturing challenges arising from the poor sintering ability of proton-conducting oxides. Additionally, they deliberately designed one of the state-of-the-art triple-conducting (oxygen ion, proton, and electron hole) cathodes (BaCe0.4Fe0.4Zr0.1Y0.1O3), significantly improving the performances of P-SOFCs. Direct-methane P-SOFCs with remarkable performances and a stable operation of 1400 h at 500 °C were demonstrated [22]. In 2017, Liu et al. [46] reported BaCe0.7Zr0.1Y0.2O3−δ electrolyte-supported cells with a peak power density of 348.84 mW cm−2 and 496.2 mW cm−2 on ethane and hydrogen, respectively at 750 °C. More recently, the long-term durability of fuel-flexible P-SOFCs has been comprehensively investigated. P-SOFCs fueled with 12 different fuel streams, including hydrogen, methane, natural gas, propane, n-butane, i-butane, iso-octane, and others, exhibit a degradation rate of <1.5% per 1000 h for most fuels at 500–600 °C [20]. This entire set of durability measurements have fully validated that direct-hydrocarbon P-SOFCs are exceptionally stable. In addition to power generation, Luo et al. revealed that P-SOFCs can simultaneously generate power and produce chemicals [47]. Both outstanding fuel cell performances and syngas production rate have been achieved. The performances of hydrocarbon fueled P-SOFCs are summarized in Table 1.
Table 1. Performances of P-SOFCs fed with hydrocarbon fuels.
To improve the durability of direct-hydrocarbon O-SOFCs, proton-conducting oxides have also been used for decorating the anode of O-SOFCs [50][51]. Proton-conducting nanoparticles are infiltrated into the anode and distributed over the Ni particles. These proton-conducing nanoparticles with basic surface can absorb and dissociate water, as abovementioned, which subsequently react with deposited carbon or sulfur; thus, this approach alleviates coking and sulfur poisoning. For example, the peak power density of direct-methane SOFCs at 650 °C was improved from 0.62 W cm−2 to 1.27 W cm−2 after decorating the Ni-GDC anode with BCY particles, indicative of the bifunctionality of proton-conducting oxides [50].