Neoplastic cells typically activate one of the two Telomere Maintenance Mechanisms
(TMM) to maintain their telomeres during uncontrolled proliferation. Most tumors reactivate
telomerase, a high-fidelity DNA transferase with reverse transcriptase activity. The prevalence of telomerase positive cancers is at 80–90% of all malignancies. A significant percentage of neoplasias activate the second type of TMM, called alternative
lengthening of telomeres (ALT), to achieve replicative immortality and telomere
elongation. ALT is commonly thought to occur in about 10–20% of all tumors. Unlike the TEL+ tumors, which rely on the enzymatic activity of a single enzyme,
ALT relies on many DNA damage response (DDR) proteins, including those involved in
the homology-dependent repair (HDR) pathway.

Confirming neoplasms as ALT+, historically, has not been as simple as defining their TEL+ counterparts. Whereas telomerase positivity relies on quantifying the activity of a single enzyme via the well-established TRAP assay, our current understanding of ALT is that there is no apparent singular identifying enzyme or characteristic to rely on. In fact, identification of ALT depends on a tumor displaying multiple of ALT’s many defining characteristics. In addition to the absence of telomerase and/or telomerase activity, ALT features also include, as shown in Table 1, the presence of: (1) telomeres of substantial length (>50 kb) [1]; (2) telomeres of heterogeneous length (<8 kb and >50 kb) [1][2]; (3) elevated levels of telomere sister chromatid exchange (tSCE) [3]; (4) extra-chromosomal telomeric repeats, or ECTRs, particularly C-circles [4][5]; (5) ALT-associated acute promyelocytic leukemia (PML) bodies, or APBs [6]; (6) telomere dysfunction-induced foci, or TIFs [7].

Table 1. Markers used to distinguish cancers based on their telomere maintenance mechanism.

In general, ALT has a heterogeneous phenotype that is often hard to quantitate; so much so that ALT has been proposed to have multiple pathways [8]. Thus, the best identification of an ALT+ cancer involves confirmation via multiple biomarkers. However, this ideal standard is rarely met, especially in large-scale ALT prevalence studies, likely due to limited tissue availability, time, technical expertise, or other resources. To best review the recent surge in ALT prevalence literature, careful evaluation of how ALT is identified becomes very important.

Telomere length and heterogeneity were among the first biomarkers used to identify ALT+ samples [1][2]; however, they have seen limited use in tumor TMM screening. Unlike most TEL+ cells, which often show a narrow distribution in telomere length, ALT+ cells manifest a much wider range in telomere lengths and contain super long telomeres that can rise upward of 50 kb [1][9]. Such findings are obtained by the Terminal Restriction Fragment (TRF) analysis, a technique that uses endonuclease-mediated cleavage of non-telomeric DNA to enrich telomeric DNA, which is then detected using a Southern Blot. Though well established and widely accepted, this biomarker is rarely used in large-scale ALT identification studies. TMM heterogeneity along with adjacent normal tissue often obscure fragmentation results, which complicates TRF ALT identification [9]. Further, length heterogeneity does not always correlate with other ALT biomarkers, such as APB presence, because heterogeneity is proposed to occur after APB formation [8]. Finally, the use of the TRF method [9] requires properly cryo-preserved samples—a great limitation to most paraffin-embedded tissue libraries.

Similarly limited in feasibility to tumor TMM screening is the measurement of tSCEs. These telomeric recombination events are measured by the use of chromosome orientation-fluorescent in-situ hybridization (CO-FISH), a specialized hybridization technique that detects the orientation of telomere leading and lagging strand probes on sister chromatids [3][9]. Although tSCEs are generally ALT-specific phenomena, certain TEL+ cell lines have been observed with similar tSCE levels [9]. Additionally, CO-FISH requires collecting mitotic cells, which is an innate barrier for using tSCE-based TMM identification in large patient cohorts. For these reasons, the use of tSCEs is limited to cultured cells and is best used as supporting evidence for other ALT biomarkers; we found no large ALT prevalence studies in the past two decades that used tSCEs as part of their identification criteria.

Elevated telomeric damage and heightened DNA repair activity are central to several methods of ALT identification, including the detection and quantification of TIFs and APBs. A hallmark of ALT+ tumors is spontaneous telomeric DNA damages, likely due to frequently stalled replication forks [10][11][12][13]. If stalled replication forks fail to be restarted on time, they are likely to collapse and lead to the generation of DSBs. ALT likely uses these strand breaks to initiate HDR and telomere elongation. Telomeric DNA damage is commonly identified as punctate nuclear foci when cells are stained with an antibody recognizing either 53BP1 or the phosphorylated histone variant H2AX (γH2AX). When these sites of DNA damage colocalize with the telomere via Telomere FISH (Telo-FISH) or with components of the Shelterin complex, such as TRF1 or TRF2, these sites are thus known as Telomere Dysfunction-Induced Foci, or TIFs [14][7]. Relative to TEL+ cells, ALT+ cells typically demonstrate greater intensity and frequency of TIFs; however, this is not always the case [14]. Though associated with ALT, TIFs are not specific enough to identify ALT on their own as they are only markers of telomeric DNA damage, which can occur due to many reasons. However, TIFs do largely colocalize with APBs in ALT+ cells.

APBs are specialized PML nuclear bodies thought to be the primary sites of ALT activity—the locations where damaged telomeres are clustered and repaired [6][15]. Their identification relies on immunohistochemical colocalization of PML protein with Shelterin subunits or with telomeres by Telo-FISH. APBs are among the pre-eminent ALT identification modalities because the resulting telomeric foci are highly abundant in ALT+ cells and tumors [9]. They colocalize with telomeres, DNA damage markers, as well as with HDR and BITS machinery [16]. Mechanistically, APBs serve as scaffolds for protein recruitment [17], drive telomere and ALT protein condensation in a liquid-liquid phase separation (LLPS) manner via Small Ubiquitin-like Modifier (SUMO) and SUMO-interacting motifs (SIM) [18][19], and are thought to be the sites where telomeric HDR and elongation occur [9]. Despite the close associations with ALT, APB foci are also observed occasionally in TEL+ cells [20] and not ubiquitously observed in all ALT+ cells [21][22][23]. Despite this limitation, APB identification allows convenient TMM classification in large cohorts. Early studies extensively validated the use of Telo-FISH with PML immunofluorescence as a method for identifying tumors as ALT+ [24].

Recently, visualization of APBs has been combined with cell synchronization and fluorescently labeled nucleotides to detect ongoing telomeric DNA synthesis [25]. Termed the ALT Telomere Synthesis in APBs (ATSA) assay, this technique involves trapping enriching cells in G2, which is the cell cycle phase most associated with telomeric repair and synthesis. It is a direct assessment of ALT positivity and activity. However, it is limited in use for tumor screening as it requires synchronizing cells.

Ultra-bright telomeric foci identified by Telo-FISH alone became an increasingly acceptable biomarker for defining ALT positivity when Heaphy and colleagues published the first comprehensive assessment of ALT prevalence across a large set of 94 malignant tumor subtypes [26]. The study estimated ALT’s total prevalence to 4% in a sample size of 6110 malignancies, which is intriguingly lower than the commonly cited 10–20% as mentioned above [26]. The reason for the discrepancy warrants further investigation. The criteria for ALT positivity required identifying ultra-bright telo-FISH nuclear foci within cells, then quantifying positive-cell prevalence within a sample. If the overall prevalence of ultra-bright foci was greater than 1%, tumors were identified as ALT+. Given the established overlap of TIFs and APBs in ALT+ cells, ultra-bright telo-FISH nuclear foci alone may be sufficient to identify ALT positivity in tumors. Not all telomerase-negative (TEL−) cell lines exhibit APBs or other ALT characteristics [21][22][23], which suggests that PML staining likely underestimates ALT prevalence. Thus, the use of Telo-FISH alone may be a more sensitive identifier or screening tool for identifying ALT+ malignancies. This innovative idea, which is implied by Heaphy and colleagues’ methodology, is limited by their Telo-FISH and APB colocalization studies, which were used as the basis for their novel criteria. They did state that most PML proteins colocalized with ultra-bright foci, though such colocalization was heterogeneous. We tend to agree that this methodology has significant merits, such as its simplicity and scalability. Despite this consensus, quantification of ultra-bright telo-FISH signals that colocalize with APBs should be performed to bring greater credibility and confidence in this popular methodology.

The C-circle assay (CCA) is a sensitive, rapid, and quantitative technique for identifying ALT activity that relies on the measurement of C-circles, a subtype of ECTR, found primarily in ALT+ malignancies [27]. C-circles were proposed to serve as self-priming homology templates that enable rolling circle amplification (RCA) of shortened telomeres [9][27]. However, recent evidence suggests that C-circles are likely the byproducts of BITS during the repair and restart of the stalled or collapsed replication forks at damaged telomeres [12][28]. Telomeric repeats neighboring DNA damage sites are thought to form internal loops (I-loops), which are excised to form ECTRs, such as C-circles [29]. C-circles are regarded as the most sensitive, specific, and quantitative biomarker of the ALT activity [27][30]. When initially developing the CCA, Henson and colleagues found that ALT+ cell lines and tumors, respectively, had 750× and 100× more C-circles than their ALT-negative (ALT−) counterparts and controls [27]. C-circles were barely detectable in any TEL+ cell lines tested but were highly positive in the TEL−cell lines—even those that do not exhibit common ALT characteristics—such as APBs or heterogeneous telomere length [21][27]. In addition to being sensitive and specific, one advantage of the CCA is its quantitative nature, which, unlike other ALT biomarkers, allows the ability to measure changes in ALT activity over time. Therefore, it has potential clinical applicability in quantifying the activity of novel ALT therapeutics or in monitoring ALT cancer progression in patients. Although performing the CCA may involve more technical expertise than telo-FISH alone, the CCA still relies on simple techniques, such as RCA, dot blots, or qPCR [30]. Therefore, CCA is the most highly recommended ALT biomarker for cell lines and tumor biopsies.

2. The prevalence of ALT in a variety of human cancers.

*: Minimum and maximum of horizontal range is per the mean ALT+ prevalence acquired of CCA, APB, Telo-FISH (alone), and TRF, respectively. N/A: not applicable – horizontal range could not be generated as this tumor was only assessed via one biomarker. 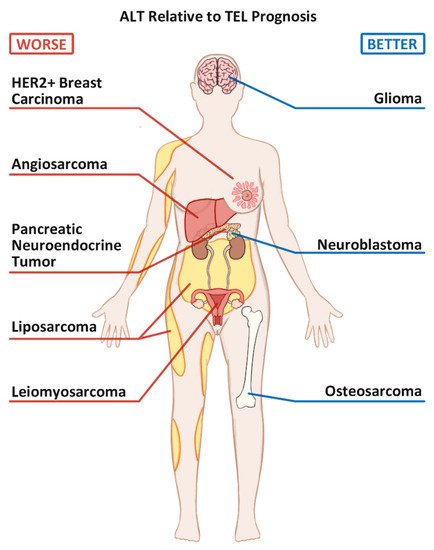 4. Mutation Status of ATRX and DAXX in ALT cancers

ATRX interacts with DAXX, and together they function to remodel chromatin and deposit certain histone variants, like H3.3 and macroH2A, onto heterochromatin [31][32]. Although their deficiency alone is not sufficient to activate the ALT pathway, mutations in ATRX and/or DAXX genes are thought to loosen up the heterochromatin structures at the telomeres and facilitate the eventual induction of ALT [33][34][35][36]. The connections between ATRX/DAXX loss and ALT activity were first noted in the genomic studies of PanNETs and CNS tumors [37][38][39]. Those results were further verified when a comprehensive assessment of 22 known ALT+ cell lines found 19 cell lines to be ATRX mutant, including U2OS and Saos-2 [40].

Table 3 summarizes the prevalence of ATR/DAXX mutations in a variety of cancers.

*: Total Mutant % = (ATRX loss + DAXX loss + Both loss)/Total Tumors; **: 0 indicates that at least one study assessed for the gene, but gene loss was not observed in any samples; ***: N/A indicates that the data was not available or the study did not assess for the gene of interest. ATRX: α-thalassemia/mental retardation syndrome X-linked (ATRX) gene. DAXX: death-domain associated protein gene.