Achalasia is an esophageal motor disease characterized by the lack of relaxation of the lower esophageal sphincter (LES) and aperistalsis. The first time this condition was described was in 1672 by Sir Thomas Willis, but the "achalasia" term was only created in 1929 by Hurst and Rake, meaning "no relaxation".

The main mechanism for which achalasia appears is due to neuronal degeneration of the myenteric plexus, although the reason for it to happen is still uncertain [1]. Reduced density of Cajal cells in the gastroesophageal junction, the gastrointestinal pacemakers, is another mechanism that may be related in some patients [2].
Achalasia is more often seen in South American countries due to its association with Chagas disease [3]. Patients with achalasia can initially show dysphagia, recurrent chest pain, regurgitation, and weight loss [4]. Usually, symptoms are nonspecific, and there is a significant delay in diagnosis, so the majority of the patients begin their treatment in advanced stages of the disease, already presenting malnutrition, underweight, and recurrent pneumonia [4]. Manometry is the gold-standard diagnostic test for achalasia. The typical findings are incomplete relaxation of LES and uncoordinated esophageal body contractions. Frequently, LES is hypertensive [5]. Barium swallow tests reveal a dilated esophagus, the reason for which achalasia is often called megaesophagus. Besides, barium swallow tests may reveal uncoordinated esophageal contractions and a narrowing at the gastroesophageal junction [6]. Patients with achalasia have an increased risk for developing esophageal cancer [7][8].
Fagge was probably the first author to point out a possible association between achalasia and cancer in 1872 [9]. He described a case of a benign esophageal condition associated with a tumor. Sato et al. [10], analyzing a sample size of 2714 achalasia patients, evidenced that the risk of developing cancer was 16.7 times higher for men with achalasia and 8.8 times higher for women with achalasia.
When patients start to have symptoms of cancer, the tumor is usually already advanced. The symptoms of achalasia and esophagus cancer are similar, and the patient may undervalue the symptoms. Additionally, esophageal-related symptoms depend on the esophagus distension and longitudinal contraction of esophageal smooth muscle, and in achalasia, the esophagus is naturally enlarged [11]. In this way, achalasia patients may present only mild esophageal symptoms, even with a severe condition within it [12]. For the carcinoma to overlap the symptoms of achalasia, it must be large to obstruct a dilated esophagus [13]. Due to the delay in the differential diagnosis, many patients end up having a late cancer diagnosis, and the locally advanced disease leads to poor prognosis of these patients, often making the curative treatment unfeasible [8].

2. The Mechanisms for the Association of Cancer and Esophageal Dysmotility Disorders

Achalasia is a risk factor for developing cancer, including squamous cell carcinoma and adenocarcinoma. Figure 1 schemes the mechanism for DNA damage and mutations for cancer development in achalasia. Additionally, other esophageal dysmotility disorders mimicking achalasia symptoms may be associated with other malignant-related conditions, such as paraneoplastic manifestations and familial KIT-gene mutation. 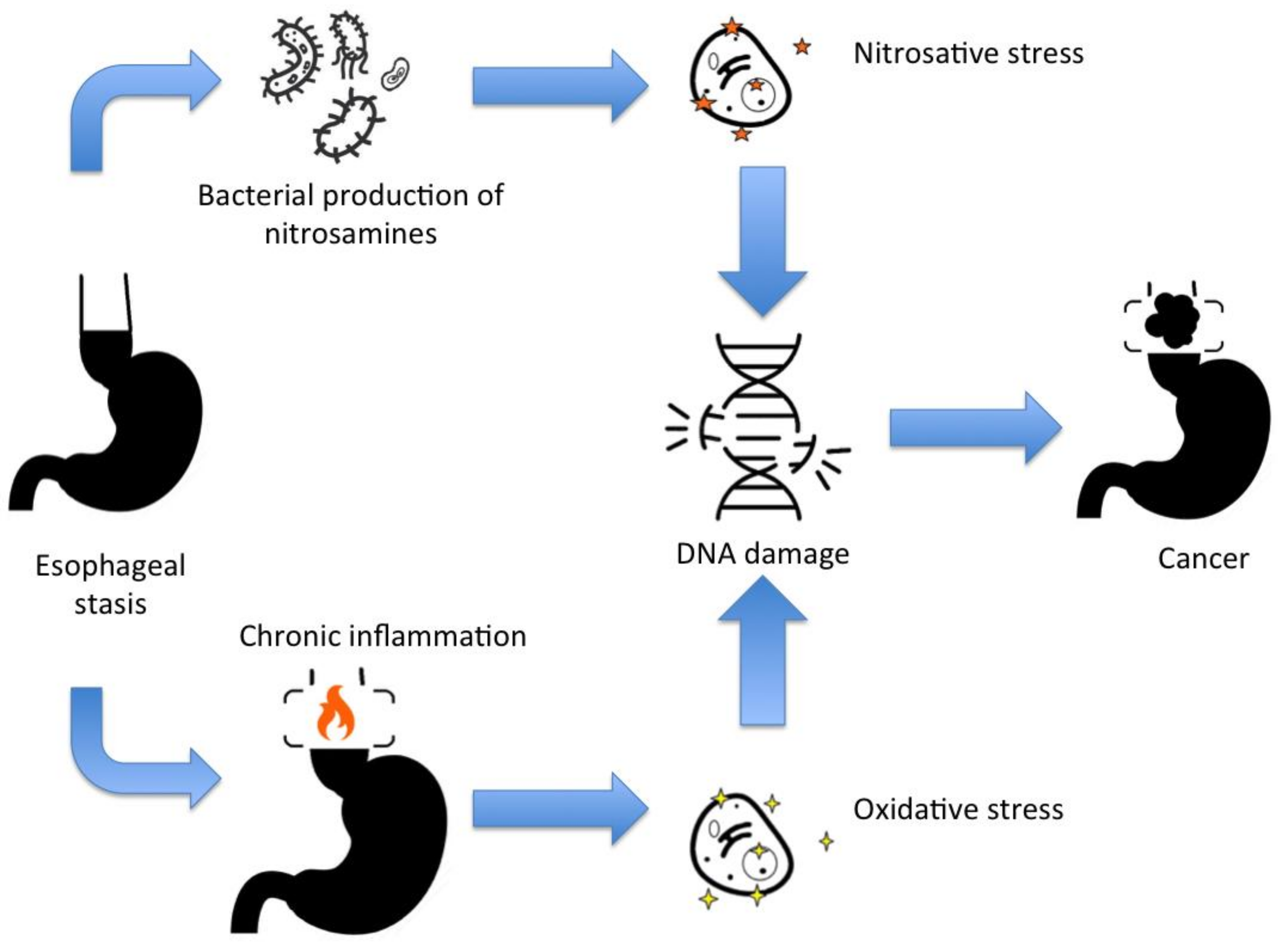 Figure 1. The main mechanisms for DNA damage and cancer development in achalasia.
Other review studies have also issued the cancer development in achalasia. A previous meta-analysis tried to investigate the incidence of cancer in achalasia [8][14]. However, due to the relatively low incidence of achalasia, the exact incidence of cancer in achalasia is still obscure once the risk for publication and selection biases are more common for small sample-sized studies. [15]. Torres-Aguilera et al. [16] pointed the main links between achalasia and cancer. The present review attempted to provide comprehensive rationality for clinicians to understand all the mechanisms for esophageal dysmotility disorders that are cancer-related. In fact, some patients will present with only dysphagia, and clinicians should be aware of the risk of associated neoplasms and should know the principal differential diagnosis, and how to investigate, follow, surveil, or treat.
In this sense, we can highlight some take-away lessons. Firstly, patients with idiopathic or Chagasic achalasia should be under surveillance for esophageal cancer since the risk for cancer progressively increases with the time for follow-up [8]. Surveillance should be continued even if patients are appropriately treated with myotomy or esophageal endoscopic dilation since there is no current evidence that these procedures reduce the risk for carcinogenesis [8]. Under a surveillance program, patients have a higher chance of early cancer diagnosis, which is amenable for endoscopic resection [10]. In achalasia patients, chromoendoscopy may help to upgrade the accuracy of endoscopic surveillance [17]. Additionally, dysphagia worsening in achalasia should always be actively investigated for cancer.
Esophagectomy would be the unique treatment that would null the risk for malignant transformation in achalasia patients. However, esophagectomy is related to a high risk for morbidity and mortality. Esophagectomy for cancer is associated with a risk of 36% of postoperative complications, and a 30-day postoperative mortality rate of 6.7% [18].
Another take-away lesson is that clinicians need to remember that more than one member of the same family with achalasia-like symptoms, mast cell or skin pigmentation disorders, or GISTs should be investigated for c-KIT mutation. As well, patients with acute onset achalasia-like symptoms with severe weight loss or dysphagia in the elderly should call attention for pseudoachalasia. Additionally, dysphagia in non-gastroesophageal cancer should always be investigated for a paraneoplastic neuronal disorder.
However, there are still more questions than answers in the field of cancer and esophageal dysmotility. Future studies are needed to fill the medical literacy gaps. Future studies should investigate the interventions by which clinicians could reduce the risk for squamous cell carcinoma or adenocarcinoma development in achalasia. There is no evidence that myotomy or endoscopic dilatation could reduce the mechanisms for achalasia malignization [6], and controlled studies are needed to investigate it. Additionally, there is a concern regarding the long-term results of POEM. Will long-term follow-up of POEM patients show a higher risk for progressing to Barrett-adenocarcinoma sequence?
Reactions involving both ROS and N-nitrosamines are potential targets for cancer chemoprevention in achalasia. Drugs that potentially mitigate the oxidative and nitrosative stress may help not only unveil future prophylaxis for achalasia-related cancer but also Barrett’s-related cancer. An animal model study evaluated the use of NG-nitro-L-arginine methyl ester (L-NAME), a NOS inhibitor, for cancer therapy. The study demonstrated that NOS inhibitors reduced the tumor growth rate [19]. Other preclinical studies using L-NAME or a similar arginine analog have shown similar results in the tumor growth rate [20][21].
Theoretically, dietary antioxidants could act to prevent oxidative stress insults in the esophageal food stasis. Curcumin, resveratrol, epigallocatechin gallate, caffeic acid phenethyl ester, isothiocyanates are antioxidative phytochemicals that could be evaluated for cancer prevention [22].
Additionally, antimicrobial therapy for changing the esophageal stasis microbiota theoretically could reduce the colonization of bacteria that can produce N-nitrosamines.
In addition, the studies of neoplasm biomarkers, such as microsatellite instability, may point to future new therapies, including immunotherapies, for patients with achalasia-related carcinoma. Additionally, tyrosine kinase inhibitor studies may show the benefit of treating certain types of esophageal dysmotility and c-KIT mutation syndromes.