Anthocyanidins are colored molecules having medium-size and belonging to the class of flavonoids. 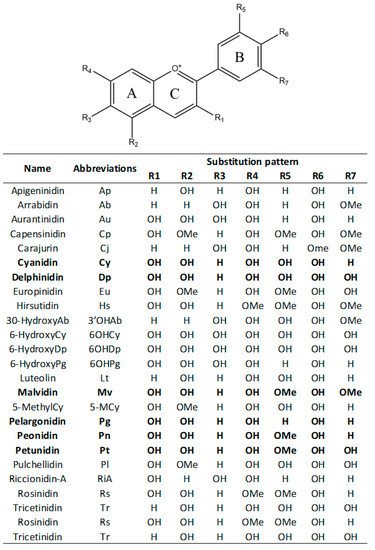 Figure 1. Chemical scaffold of anthocyanin compounds and their relative substituents. In the table, the most common anthocyanidins are reported in bold.

In most of the cases, anthocyanidins are bounded with sugar moieties, forming the corresponding anthocyanins. Glycosylation is achieved enzymatically following the adding of the sugar portion at the 3rd and/or 5th position (R1 and/or R2 subsistent of the chemical structure displayed in Figure 1 of the scaffold [5][6]. As a consequence of the glycosylation, anthocyanins have an increased water solubility and stability with respect to the related anthocyanidins [6]. Despite the most common glycosylation process involves the condensation of monosaccharides such as glucose, galactose, rhamnose, arabinose, rutinose and xylose, also disaccharides and trisaccharides may be attached in some cases [1]. Finally, anthocyanins may be also often acylated with organic acids such as p-coumaric, caffeic, and ferulic acids via ester bonds usually to the 3-position of the sugar moiety [1][5]. Consequently, to date more than 500 different anthocyanins that differ not only for the glycosylation pattern of the scaffold, but also for the presence and position of aliphatic or aromatic carboxylates are reported. In spite of their great structure variability, the anthocyanins most distributed in plants are those originated by Cy, Dp, and Pg. They are present in 80% of the leaves, 69% of the fruits, and 50% of the colored flowers [7][3][4][8][9]. On the other hand, anthocyanins formed by Pt, Mv, and Pn, are limitedly distributed [7][3][4][8][9][10].

The conjugated bonds in the chemical scaffold are one of the responsible factors for the light absorption at about 500 nm [5][11]. However, also the type of substituents present in the benzyl ring, local pH, state of aggregation and complexation with other inorganic and organic molecules may contribute to color variation. In particular, it has been observed that anthocyanins may display almost the chromatic scale [5][11][12].

Anthocyanidins and anthocyanins are almost exclusively produced by plants, in a branch of the phenylpropanoid pathway that is also involved in the biosynthesis of other flavonoids [13][14] (Figure 2). The enzymes involved in biosynthesis of anthocyanidins are localized in the endoplasmic reticulum, organized into a multi-enzyme complex named flavonoid metabolon [13][14]. The precursor for the synthesis of all flavonoids is the phenylalanine. This amino acid marks the branch point of primary and secondary metabolism from which the phenyl-propanoid pathway can lead to the synthesis of all phenolic compounds [13]. As first step of the pathway, phenylalanine is converted by phenylalanine ammonia-lyase (PAL) in cinnamic acid, which is then further transformed into coumaric acid by the action of cinnamic acid 4-hydroxylase (C4H). Following the activation catalyzed by the 4-coumarate-CoA ligase (4CL), 4-coumaryl-CoA reacts with three molecules of malonyl-CoA in a reaction catalyzed by chalcone synthase (CHS). This reaction allows the formation of 4-hydroxychalcone (ex. naringenin chalcone) and it marks the start of the flavonoid biosynthetic pathway. The 4-hydroxychalcone is transformed into the respective 7,3′,5′,trihydroxyl-flavone (ex. naringenin) by the action of chalcone isomerase (CHI). Afterwards, flavanone 3-hydroxylase (F3H) oxidizes 7,3′,5′,trihydroxyl-flavone into flavonol-form (ex. dihydrokaempferol). Then, dihydrokaempferol is transformed into dihydromyricetin or dihydroquercetin by the action of flavonoid 3′-hydroxylase (F3′H) or flavonoid 3′,5′-hydroxylase (F3′5′H), respectively. In order to convert the three hydroflavonols into anthocyanidins, the combined action of dihydroflavonol-4-reductase (DFR) and anthocyanidin synthase (ANS) is required. The first enzyme yields to the formation of the leucoanthocyanidins, meanwhile the second one catalyzes the 2-oxoglutaratedependent oxidation of each leucoanthocyanidin into 2-flavan-3,4-diol. These latter compounds spontaneously evolve to the respective anthocyanidins [15][16]. 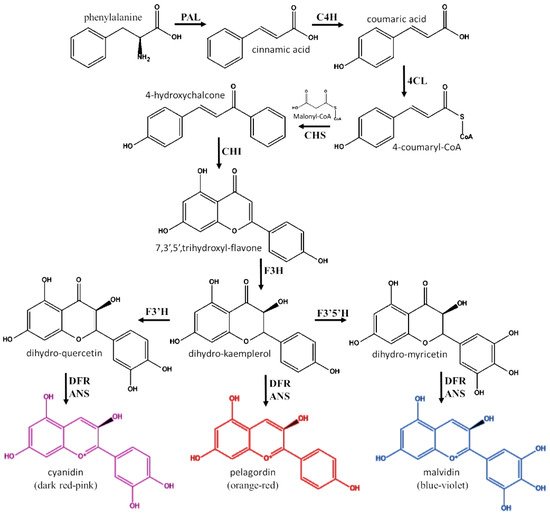 After their synthesis, anthocyanins are transported to the plant vacuole through vesicle trafficking pathway that may involve, or not, Golgi apparatus [17]. In vacuole, anthocyanidins are converted into the more stable form by the action of UDP-glucose flavonoid 3-O-glucosyltransferase (UF3GT) or UDP-glucose flavonoid 5-O-glucosyltransferase (UF5GT). These two enzymes add a sugar moiety respectively at the 3rd and/or 5th position (R1 and/or R2 subsistent of the chemical structure displayed in Figure 1 of the chemical scaffold [5][6][15]. Finally, the glucoside form of anthocyanidins may be further modified in many species by glycosylation, methylation, acylation, or condensation with other organic molecules [15][16].

Anthocyanins are one of the major groups of natural pigments and they are responsible for colors of many leaves, flowers, and fruits [18]. In the past the physiological role of anthocyanins in plants was exclusively ascribed to improve the reproductive success by facilitating communication between plants and pollinators or seed-dispersers [19]. On the other hand, in order to justify the occurrence of anthocyanins also in plant districts different from flowers and fruits, it was mistakenly assumed that they could be an incidental consequence of the flavonoid pathway [20]. Indeed, the intermediate compounds dihydrokaempferol, dihymyricetin, and dihyquercetin may alternatively be oxidized into respective flavon-3-ols by flavonol synthase (FLS) as well as used for the production of anthocyanins (Figure 3) [5][8]. However, it was shown that some parts of the plants devoid of immediate signaling function contained a considerable amount of these flavonoids [5][21][22]. On the other hand, anthocyanins have specific histological localization, and their accumulation patterns do not match those of other pigments [5][23]. 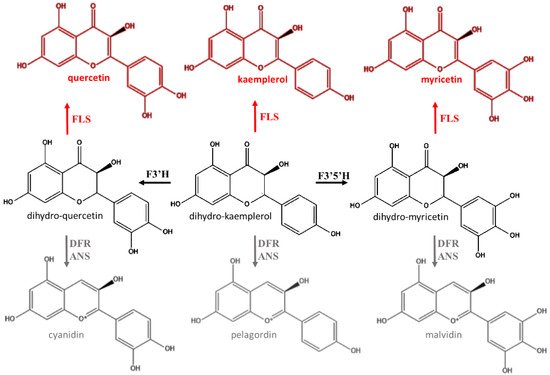 For these reasons, recently, anthocyanin role in plants was questioned. To date, it is well-known that these molecules are involved in several defensive processes, including the screen role against UV-B [24][25][26][27][28] and plant protection against high light intensities [25][28][29]. However, light stresses are not the only abiotic stress in which anthocyanins seem to play a key role. Indeed, thanks to their high antioxidant capacity, these flavonoids are involved in all those responses that contrast oxidative stress induced by heat conditions [30][31] and water and nutrient deficit [30][32][33]. Moreover, anthocyanins are also involved in response to biotic stresses, such as mechanical damage due to herbivore attack [34][35][36], insect infestation or fungal infection [37][38][39]. Table 1 reports the main abiotic and biotic stress conditions in which variations of the total content of anthocyanins were observed.

Beyond the involvement of anthocyanins to contrast the oxidative stress conditions related to abiotic and biotic menaces, anthocyanins seem to be also able to contribute to the physiological processes during non-stress conditions, such as the elevation of leaf temperature [70][97]; transport of nutrients and monosaccharides [98][99][100]; and regulation of osmotic balance [30][84]. Table 2 reports the main plant physiological pathways in which anthocyanins are involved.

Table 2. Documented plant physiological processes in which anthocyanins are involved.

Fruits and vegetables are the only edible sources from which it is possible assuming anthocyanin compounds [4][144]. Although among the fruits the anthocyanin content is very variable, generally the level of anthocyanins in fruits is much higher than in vegetables [145]. The lowest anthocyanin content per 100 g of fresh weight was recorded for grapefruit [146][147], date [148], and fig [149], meanwhile some berries, such as cranberry [7], chokeberry [150], huckleberry [151], blueberry [152], raspberry [153][154], and bilberry [155][156] shows the highest one. Concerning vegetables, the most reach in anthocyanidins and anthocyanins are red cabbage [157][158][159], purple cabbage [160], and purple potato [40][161]. However, total anthocyanin content in fruits and vegetables considerably varies among the different genera and cultivars, and it is strongly affected by different light, temperature, and agronomic factors [162]. Figure 4 shows the cluster distribution of anthocyanins in plant kingdom according to the anthocyanin content reported in Phenol-Explorer Online Database [163][164][165]. For this analysis, Euclidean distances were calculated by using the average linkage method. 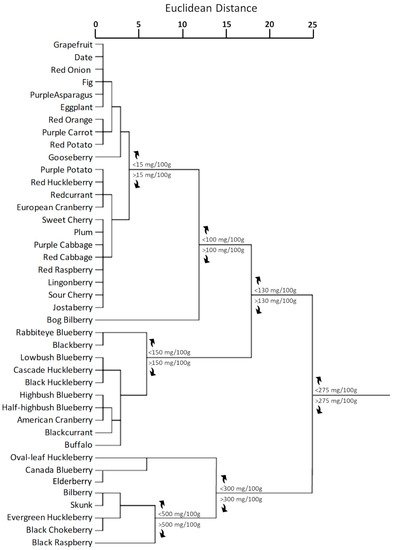 Figure 4. Cluster distribution of anthocyanins in plant kingdom based on the total anthocyanin content according to Phenol-Explorer Database [163][164][165]. Euclidean distances were calculated with average linkage method. Statistical analysis and graphical representation were made using SPSS v. 24 software. The cluster was generated by using SPSS ver.24 statistical software.

In the recent years, some flowers were proposed as alternative edible sources of phytochemicals. In order to be included in human diet, flowers have to be non-toxic and innocuous [166][167]. Indeed, flowers may contain toxic substances, including hemaglutinnins, oxalic acid, cyanogenic glycosides, or alkaloids and cause severe damage to the consumers [166]. However, many flowers can be considered safe, and therefore can be consumed as food. Although flowers are little known as edible sources, they have been used for over 500 years in Europe and China as herbal medicine [168]. Actually, they are mainly used for enhancing the aesthetic value of foods, as evidenced by the increasing number of edible flower cookbooks, culinary magazine articles, and dedicated television segments [169][170]. Despite edible flowers are still considered a niche product, they are gaining attention due to their exotic aroma and textures, delicate flavor, attractive color and phytochemical composition [171]. In particular, edible flowers are a potential source of several bioactive compounds, including anthocyanins [170][171][172]. Among them, begonia (Begonia tuberhybride), tagete (Tagetes patula), mini rose (Rosa chinensis), mini daisy (Bellis annua), litoria (Clitoria ternatea), cosmos (Cosmos sulphureus), and cravine (Dianthus chinensis) are the most known and commercialized [171].

Apart from their origins and physiological roles in plants, anthocyanidins and anthocyanins seem to play important roles in human health and well-being [7][5][156]. Indeed, their intaking through the consumption of foods rich in these flavonoid compounds seems to be linked to an improvement of the redox balance thanks to their high scavenging and reducing activities [7][162][173]. On the other hand, interesting properties, such as antitumor, antiatherogenic, antiviral, and anti-inflammatory effects, decrease of capillary permeability and fragility, inhibition of platelet aggregation and immune stimulation were reported [174]. The positive effects ascribed to the consumption of fruits and vegetables rich in anthocyanidins and anthocyanins are not limited to the gastro-intestinal tract. Indeed, anthocyanins resisting to gastric digestion may be absorbed in the stomach via bilitranslocase-mediated mechanism [175][176][177][178], or in the intestine through a mechanism involving the sodium–glucose co-transporter as suggested for other flavonoids [176][177][178][179][180].