In rheumatoid arthritis (RA), extracellular vesicles (EVs) are associated with both the propagation and attenuation of joint inflammation and destruction. However, the specific EV content responsible for these processes is largely unknown. Investigations into identifying EV content are confounded by the challenges in obtaining high-quality EV preparations from synovial fluid. Implementing a size exclusion chromatography-based method of EV isolation, coupled with small RNA sequencing, we accurately characterised EV miRNAs in synovial fluid obtained from RA patients and investigated the differences between joints with high- and low-grade inflammation.

Rheumatoid arthritis (RA) is a chronic systemic autoimmune disease that targets synovial joints. RA causes chronic, progressive joint inflammation with exacerbations and remissions. Unless it is adequately treated, disease persistence leads to irreversible joint destruction and subsequent joint deformity, resulting in progressive disability. In RA, joint damage occurs due to an immune response that drives inflammatory cell infiltration. The pathophysiology of RA is incompletely understood. To improve patient outcomes and guide the development of more effective ways to control this disease, a better understanding of the disease processes is required.
Extracellular vesicles (EVs)—including exosomes, microvesicles and apoptotic bodies—are phospholipid bilayer-bound vesicles that are released from host cells and which contain a bioactive cargo of RNAs, proteins and lipids [1]. In RA, synovial fluid (SF) EVs have immunomodulatory functionality and are described to both contribute to and protect against joint destruction [2][3].
MicroRNAs (miRNAs) are ~18–25 nucleotide RNAs that can regulate protein translation through complementary binding to mRNA transcripts [4]. In RA, fluctuations in the expression of miRNAs may contribute to the severity of joint inflammation and destruction. For example, elevated miR-146a levels are reported in RA SF [5] and in CD4+ T cells isolated from RA SF [6], but not in osteoarthritis SF, whereas miR-146a expression in SF CD4+ T cells is positively correlated with SF TNF levels [6]. A direct role for miR-146a in promoting inflammation through upregulating T cell activity is supported by miR-146a overexpression, suppressing apoptosis in Jurkat T-like cells [6].
An increasing number of studies have also demonstrated that miRNAs encapsulated within EVs can promote inflammatory disease. For instance, miRNAs in Treg-derived EVs supressed T helper 1 cell proliferation and pro-inflammatory cytokine release [7]. Conversely, GU-rich motifs present in some EV miRNAs have been described to act as endolysosomal TLR8 (TLR7 in mice) agonists [8]. Consistent with this, EVs in the sera of HIV patients were found to contain GU-rich viral miRNAs that act as ligands for TLR8 and stimulate TNF release in recipient macrophages [9].

EVs were first prepared by means of size exclusion chromatography (SEC) from SF obtained from a cohort of RA patients with either high- or low-grade inflammation (Table 1). To confirm that EV preparations were of satisfactory quality, EV enrichments were assessed by Western blotting for the canonical EV markers: HSP70, syntenin, FLOT1, Rab 27b, TSG101 and annexin 1 (Figure 1A). Transmission electron microscopy confirmed the presence of EVs with minimal apparent non-EV contaminating material (Figure 1B). These observations are consistent with our previous report detailing SEC as a method for obtaining high-quality EV enrichments from SF [10]. Previously, we demonstrated that RA patients with high-grade synovial inflammation have increased concentrations of SF EVs [11]. Consistent with this, we detected a 3.5-fold increase in the EV miRNA concentration per mL of SF in joints with high-grade inflammation (p-value = 0.0017; Figure 1C), suggesting the potential involvement of SF EV miRNAs in inflammatory processes in RA. 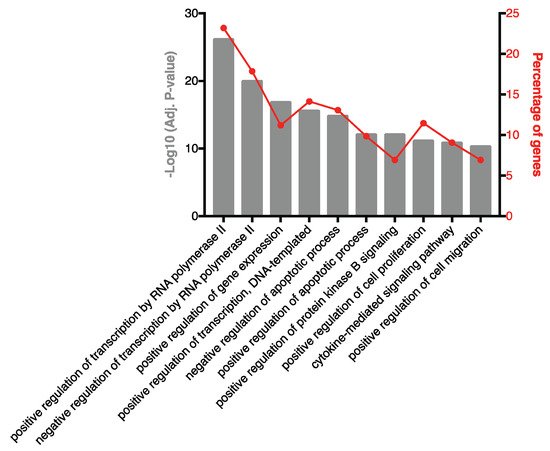 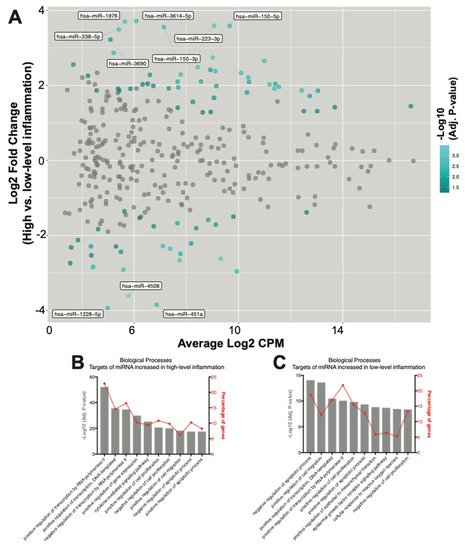